Established in 2003, Hakuhodo Indonesia brings together more than 100 employees working to embody the spirit of Hakuhodo’s sei-katsu-sha insight and partnership philosophies for their local clients. They are delighted to be sharing in the success of Hakuhodo becoming Network of the Year at ADFEST 2021, along with their team’s recent big win at The One Show 2021. In the fourth volume of this series, we hear from three key creative talents: Woon Hoh (Woon), Chief Creative Officer in charge of Indonesia, Malaysia and Singapore, Chow Kok Keong (KK), Regional Executive Creative Director in charge of Indonesia, Malaysia and Singapore, and Fajar Noor Fathjri (Fajar), Creative Director of Hakuhodo Indonesia.

Three might just be a lucky number for Hakuhodo Indonesia, since the talented trio and their team won awards in three categories at ADFEST this year with three different works. In view of the Covid-19 situation, they have all been working from home, with Woon and KK in Malaysia and Fajar in Indonesia. However, joining the interview from their respective locations over Zoom, it is clear they share close bonds and a mutual passion for their craft.

A taste for success

They began by discussing the three award-winning works from ADFEST 2021, the most successful of which was the “Flavour of Home” campaign for Sushi Sei, an independent sushi restaurant in Jakarta. This work was inspired by the feelings of Japanese expats missing home during Covid-19, and won Silver in the “Outdoor Lotus: Retail category.” 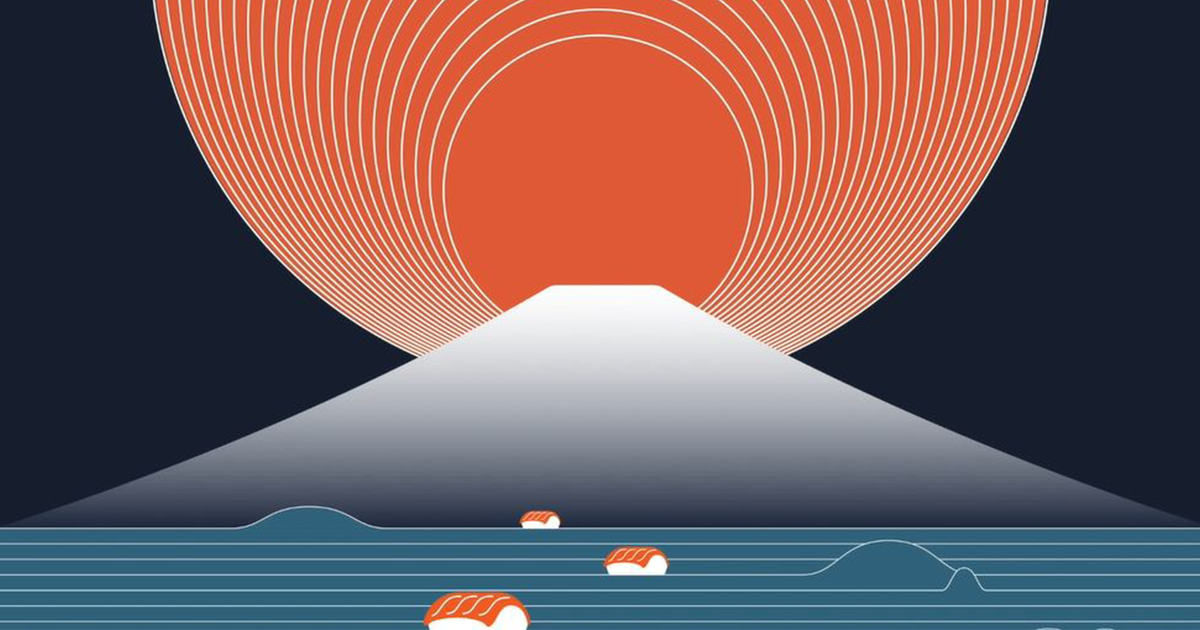 “This is our second campaign for the client, which is a restaurant run by a Japanese chef. They offer very authentic foods at reasonable prices, and they have a big group of very loyal Japanese expatriate customers in Jakarta,” says KK.

With Covid-19 lockdowns and travel bans in place, Japanese expats in Jakarta were unable to travel back to Japan and were missing their home culture. The campaign reminds them that Sushi Sei can offer a genuine “taste of home” with its sushi and other dishes, through posters, press ads and a video on Instagram.

“Each type of sushi in the campaign is forming the shape of a ‘sushi house.’ It looks like a very simple outline but it took us more than four months to craft this, as we explored many routes,” KK explains. He adds that Hakuhodo Indonesia pushed themselves to achieve the highest level of work, before launching the campaign in the last quarter of 2020.

The team also won a Bronze at ADEST 2021 in the “New Director Lotus: Commissioned Spot” category with an anime called “Little Light.” This is a somewhat unique work, because the campaign was produced to promote Citra Pariwara, the premier advertising festival in Indonesia, which has been organized every year since 1987.

As the winner of Agency of the Year at the 2019 Citra Pariwara awards, Hakuhodo Indonesia was tasked with helping the organizing committee to promote the 2020 festival. “It was actually a call for entries for the award show. We’ve done this promotional material five times already, because Hakuhodo Indonesia was named Agency of the Year five times,” Woon points out. “We didn’t expect it to win an award—that was just the garnishing on top!” 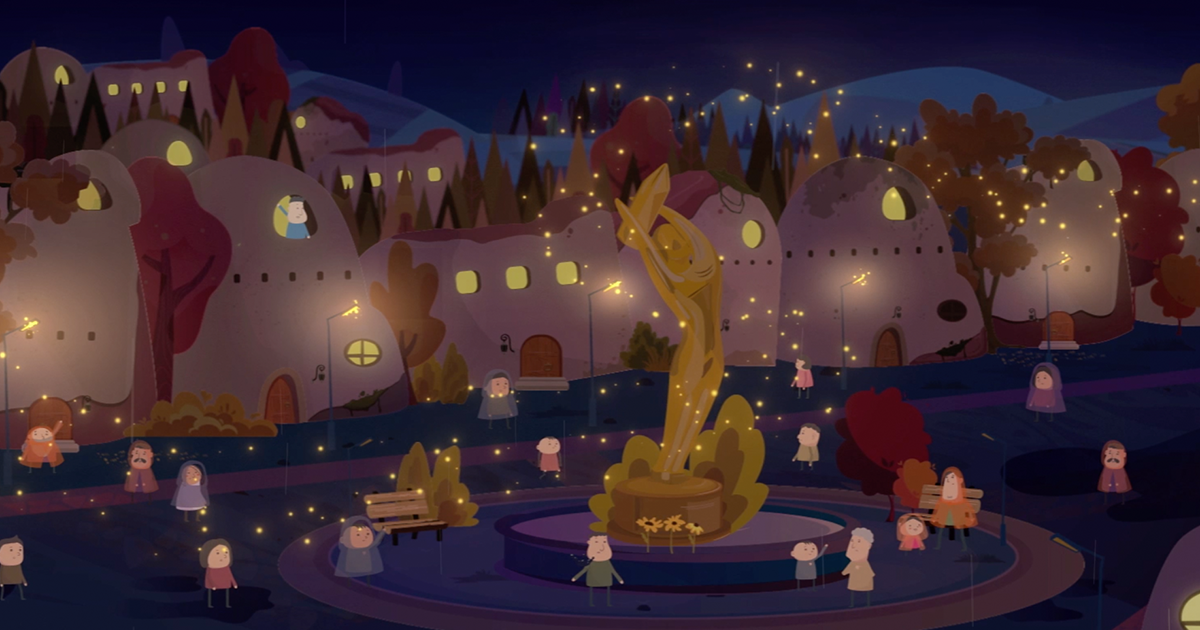 Although the Covid-19 pandemic has presented the team with various logistical challenges, Fajar notes that they worked closely with production house Think Tank to come up with characters and a storyline that would be memorable and appealing using 2D animation. The overall theme is people taking care of each other, with creativity shining like a light.

“The 2020 event was held during the pandemic and it was the first time online,” Fajar says. “Our animation short shows a young boy interacting with fireflies, and how their creativity can help make life brighter and happier for the people in his village. We used the fireflies as an analogy, as we know they shine in all kinds of conditions.”

Getting real about social issues

The third winning work at ADFEST was “#CloseTheGap,” produced for an established client, She Radio 99.6 FM. More than 80% of this radio station’s audience are women and the client challenged Hakuhodo to bring attention to a very topical social issue—the gender pay gap. 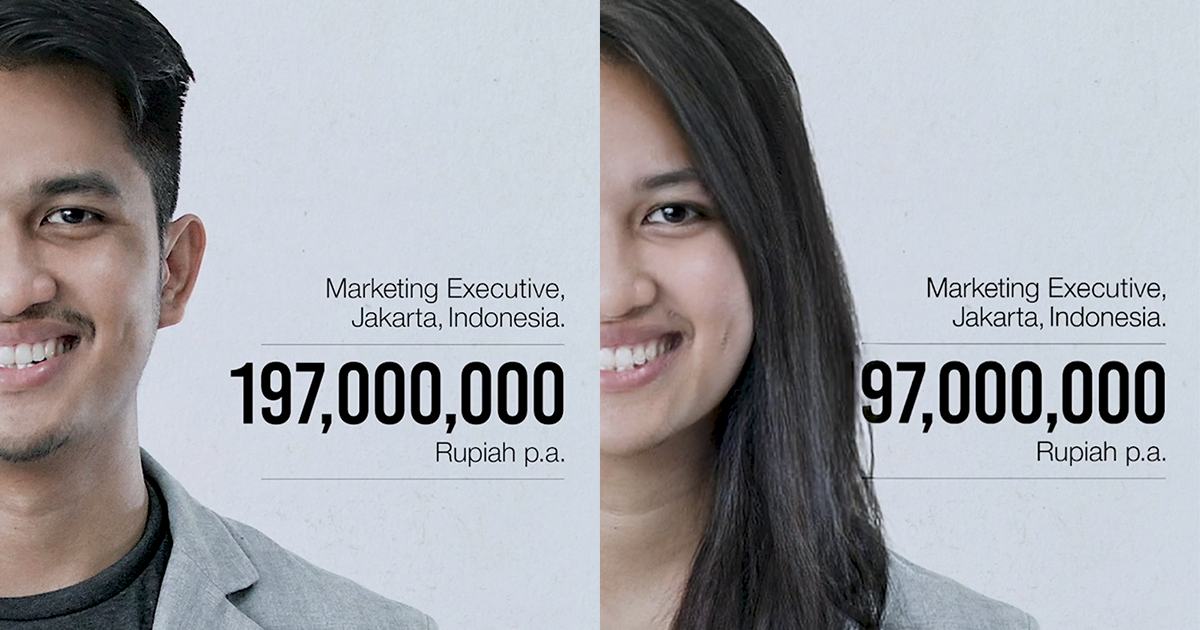 “The client, She Radio, does a lot of CSR projects that are supportive of women’s issues,” says KK. “We started with newspaper ads, which is a conventional media, so we wanted to turn this into something more interactive and engaging. We used FaceApp—a popular app that can change the gender of your photo, i.e. from woman to man or from man to woman. We urged people to share it on their phones and social media.”

It immediately captured the public’s interest, leading to involvement by celebrities and influencers and an online petition to close gender pay gaps in Indonesia. Moreover, it is now even being used in educational programs.

Following on from their success at ADFEST, Woon, KK and Fajar have even more reason to celebrate after the recent One Show 2021. This is a prestigious international award show honoring excellence in advertising, design and digital marketing. At The One Show 2021, Hakuhodo Indonesia’s “Flavour of Home” for Sushi Sei earned three Gold and a Bronze.

In the One Show 2021 Rankings, which rank companies and individuals based on points earned from their winning entries, “Flavour of Home” ranked No. 2 in the world in Highest Ranked Work in two disciplines (Out of Home and Print). Moreover, in the Creative rankings by credit, six creators who collaborated on this work ranked among the top five in the Asia-Pacific region in their respective credit categories, and naturally Woon, KK and Fajar were among the six honorees.

With Woon and KK in Malaysia and Fajar in Indonesia, Covid-19 has had a huge impact on the way they are working with their teams and clients. “We usually do a lot of brainstorming, and we could be sitting in the meeting room and talking for hours. But when you are on Zoom, you are always pressed for time and feel like you must hurry up. People think since you are working from home, you can schedule more meetings!” Woon says with a wry smile, as the other two nod in agreement.

Woon admits that doing video presentations online can be frustrating due to time lags, while it can also be hard to see body language and expressions, making it tougher to read people’s reactions. “But we are human beings, and if I am facing these problems, so is everyone else. Somehow we manage to adapt and work with our international teams,” he says pragmatically.

KK agrees. “We are all kind of used to this working from home situation now. The key challenge is that nowadays clients tend to change the brief last minute based on the Covid-19 situation, with lockdowns and no shoots allowed, and clients’ budgets have also been slashed due to the pandemic. So we need to adjust fast enough to address the clients’ concerns in a very short time,” he explains. Another challenge is how to manage relationships with clients during the pandemic, as travel bans make it harder, especially with clients who prefer face-to-face meetings.

Despite these obstacles, however, everyone at Hakuhodo Indonesia is staying positive. “As with the Citra Pariwara campaign “Little Light,” I believe creativity will continue to move things ahead!” says Fajar with a smile.

All three say they highly value the corporate culture of Hakuhodo Indonesia and how it has created a caring and supportive atmosphere for team members.

“I think what makes a company successful lies in the leaders, who set the vision and chart the path. And so in this case, our leaders—Irfan, Wiwi, Mahendra and Devi—became the mainstay of the corporate culture at Hakuhodo Indonesia,” says Woon. “When I joined 15 years ago, Hakuhodo was totally unknown in Indonesia. It was made clear by Irfan Ramli, the Chairman of Hakuhodo International Indonesia, that we need to be outstanding with our products, with a very clear vision that we need to build a great reputation as a creative agency.”

Reflecting on his 13 years with Hakuhodo, Fajar is grateful that employees are given space to grow their skills and prove themselves. “We are not just co-workers—the feeling is that we are like family. In normal conditions we chat together in our garden over break, and even during the pandemic we are celebrating some online events, so we still have that family feeling,” he points out. 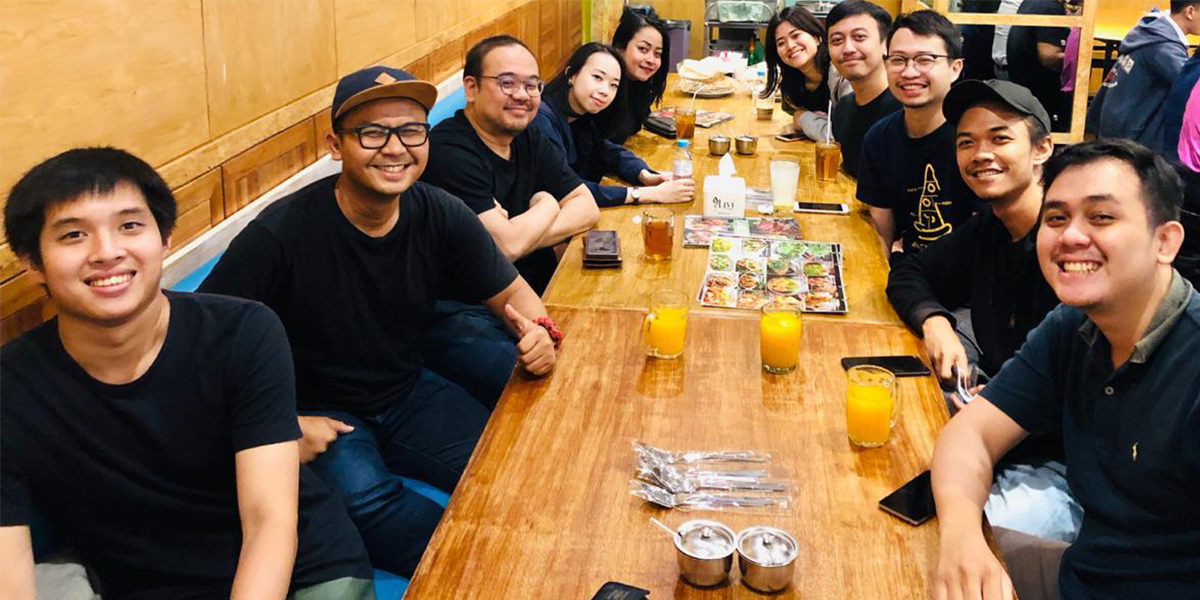 Lunch with the creative team before Covid-19

Keeping ahead in an era of change

Looking ahead at industry trends and issues in Indonesia, Fajar says, “Competition is quite strong, with smaller companies who are now trying to reach the big clients with competitive prices. But we are committed to the spirit that we can give more, and deliver something different, beyond the clients’ expectations.”

Woon notes that consumer habits are now focused on digital media, and people want speed and instant gratification. “When clients look for presentations from us, they expect us to be nimble and fast.” He says that the whole cycle of work has accelerated, from digesting the brief through to presentation.

“We used to take a month to six weeks, but now the client expects everything to be three to four times faster. Every country is facing this and we need to adapt and change—but speed with a purpose. It makes us work harder and think harder, and assemble the best people possible,” says Woon.

“The media landscape keeps changing with the digital media, but we still need to lead by idea. Medium is just a platform,” says KK. “Everything should still be about creative ideas based on sei-katsu-sha insight. We shouldn’t be afraid of the so-called digital era, because digital is what helps you to perform the execution to reach the target audience.”

Woon agrees. “If you are a good creative, whether it’s traditional or digital media, you can adapt to the media itself. What is important is the creativity, and it’s the content that makes it interesting,” he says. “No matter how tough the situation is, you need a passion for whatever you do. If you have passion, sharpen your skills and just do it—enjoy what you do.”

KK and Fajar echo these sentiments. KK wants to keep pushing forward, both for himself and his team, until he sees “the best ideas on the table,” while Fajar adds, “Creativity has no limits, whatever the conditions, the challenge—or the budget! We are trying to make things possible.” 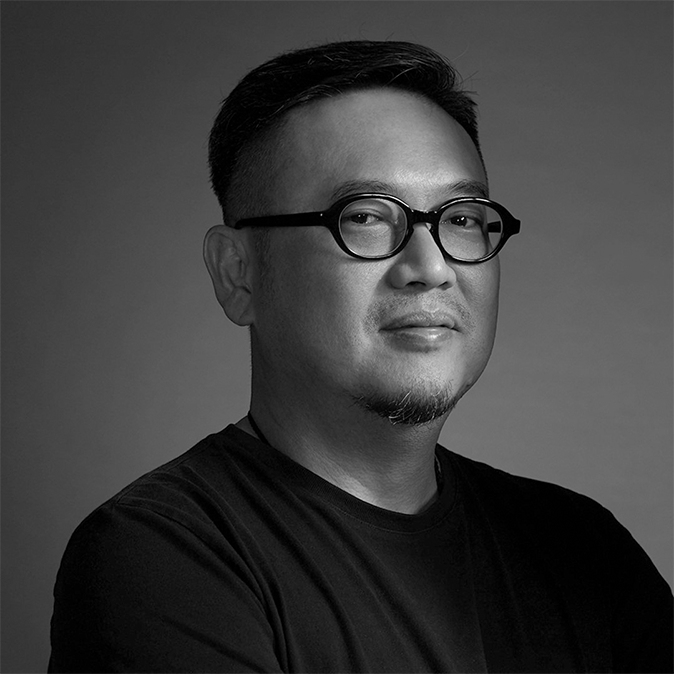 Woon Hoh
Chief Creative Officer
Indonesia, Malaysia, Singapore
Prior to taking up his current role as Chief Creative Officer in charge of Indonesia, Malaysia and Singapore, Woon was Executive Creative Director of Hakuhodo Indonesia. Under his leadership, Hakuhodo was named Agency of the Year five times. He is currently devoting his time to nurturing young talent, and in recent years teams led by Woon have won numerous major awards, including Best of Show and multiple Gold awards at The One Show, New York Festivals, London International Awards, Clio Awards, Citra Pariwara, Kancil Awards, LongXi Awards, ADFEST, Spikes Asia, Cannes Lions and more. As a well-respected creative, Woon is regularly invited as a judge at global and regional awards shows. 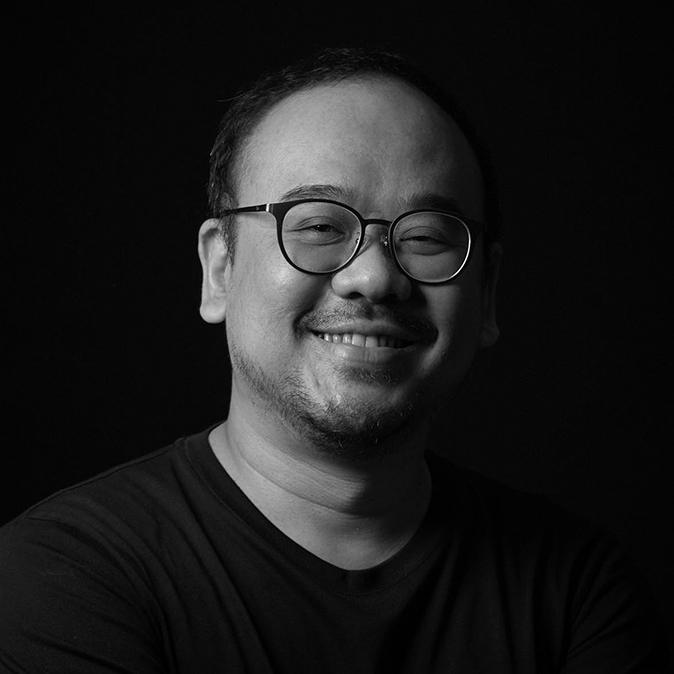 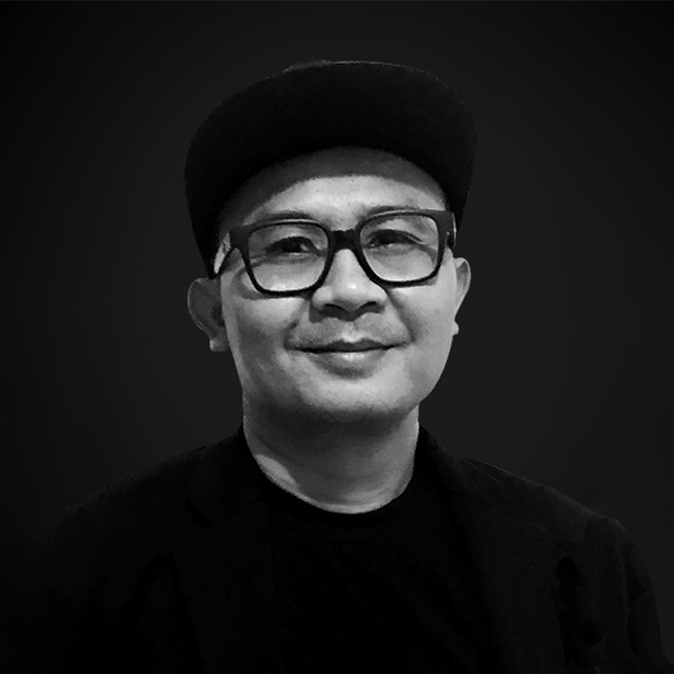 Fajar Noor Fathjri
Creative Director, Hakuhodo Indonesia
Fajar began his career as an art director and joined Hakuhodo Indonesia in 2008. Following his latest appointment as Creative Director in 2020, he helps create innovative campaigns for both local and global clients. His industry accolades include being ranked 6th Hottest Creative in Indonesia in 2017 by Campaign Brief Asia and 4th in 2018, as well as winning several Grand Prix at Citra Pariwara, multiple awards at ADFEST and AD STARS, and a Graphite Pencil at D&AD Awards. Fajar believes there is no limit to how creativity can change people’s behaviors and lives, and he is passionate about making a real difference through creating future possibilities.
SHARE
Back to News & Insights