Growww Media Group (hereafter “Growww”), a major independent agency group consisting of five group companies in Taiwan, became a consolidated subsidiary of Hakuhodo in April 2020. One year later, Growww has contributed to the success of Hakuhodo becoming Network of the Year at ADFEST 2021. In the third installment of this series, we introduce two of Growww’s leaders, Michael Dee, Chief Creative Officer of the United Communications Group, and Kiki Chen, Co-founder and Deputy Chairwoman of Medialand. They tell us about the significance of the events of the past twelve months, as well as sharing the stories behind some of their award-winning works and their insights on industry developments in Taiwan. 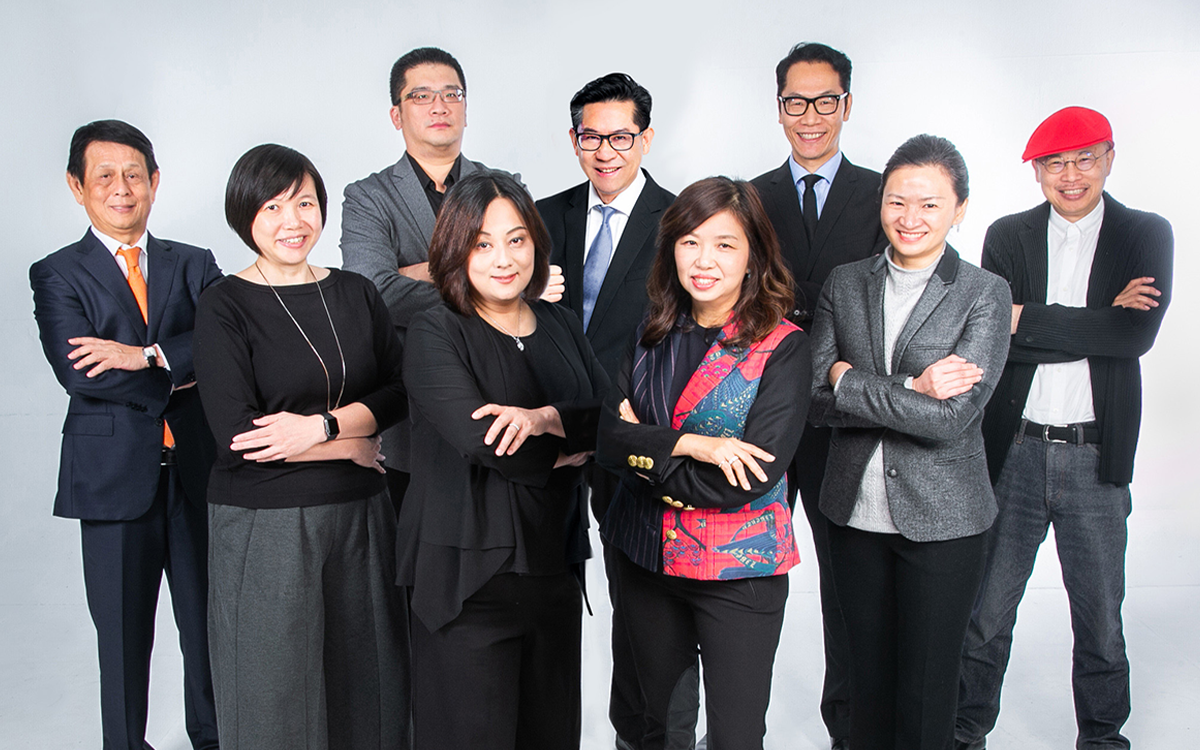 The management team from Growww Media Group, with Kiki Chen second from the left and Michael Dee on the far right.

Credit for the innovative campaign goes to Unisurf, the digital marketing solution company of United Communications Group. While Braun leads Taiwan’s electric shaver market, the company was keen to raise their profile among young consumers. Drawing on the younger generation’s love of social media and trending news, Unisurf came up with a crossover campaign with popular neighborhood restaurant chain Formosa Chang. Known for braised pork rice dishes with 60 years of history, Formosa Chang’s logo is a bearded character based on the chain’s founder, Yan-quan Chang. 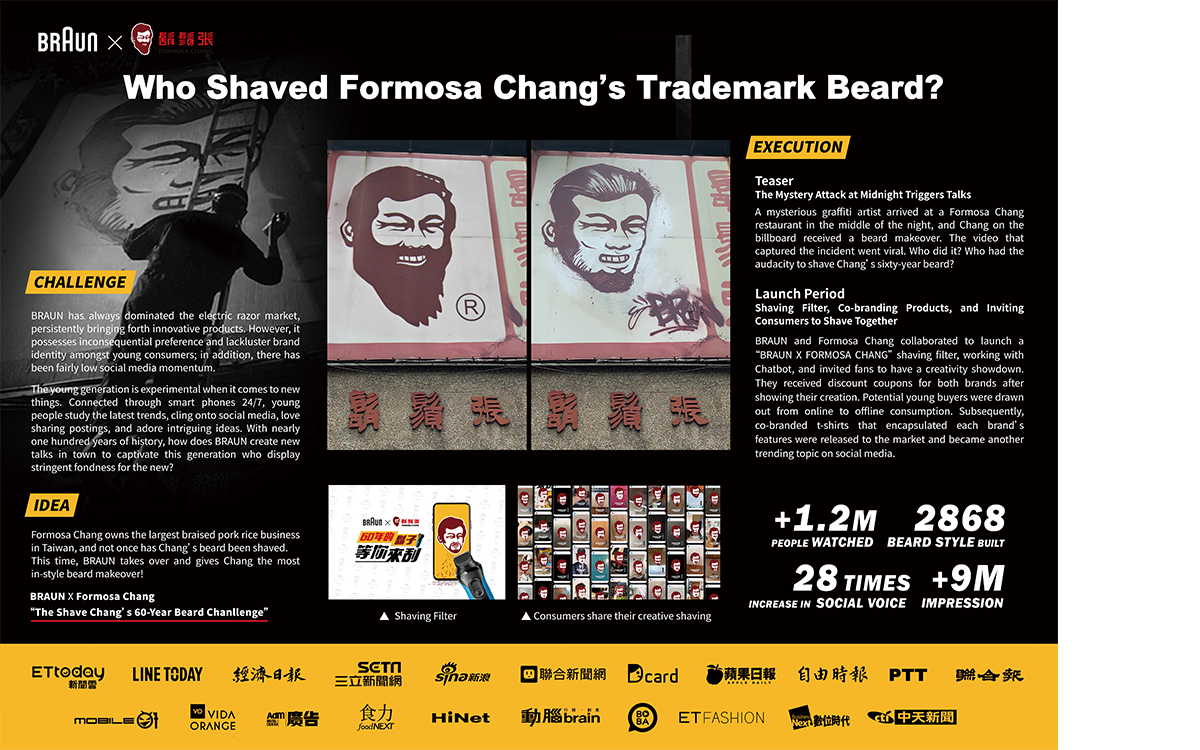 Dee admits that his team were unsure if Braun would embrace such an unusual idea at the outset. “However, after the client’s internal discussion, they approved it very quickly,” Dee says. “And luckily, Formosa Chang’s Chairman is a very open-minded leader. He wants to revitalize their brand and he recognized this opportunity to crossover with an international brand like Braun. It’s a win-win idea.”

The campaign began by secretly changing one of the restaurant chain’s billboards to depict a newly-shaved Chang, along with a video that went viral on a local popular social media platform. “Everybody was starting to discuss it—who had done this naughty thing to the Formosa Chang logo?” Dee explains. “They thought it was a prank by some young people, but after two days we announced that it was a crossover campaign with Braun and Formosa Chang.” The teaser video was viewed by more than 1.2 million people in just a week, while the campaign went on to reach more than nine million people.

The power of collaboration

Dee says that joining the Hakuhodo family has been a very positive change for the employees in the Growww Group. “We have got strong, professional international support from Hakuhodo in every aspect. It is great for us to be inspired by global team members. Now we can work closely with many different companies around the world.
In addition, when Genki Tei, the CEO of Growww Group, came on board from Hakuhodo, he brought in a culture of teamwork and collaboration to Growww. It’s very good, as we have different kinds of professional backgrounds that we can mix together in our five brands—growing stronger as in the name, ‘Growww’.”

The members of Growww, with Tei in the middle of the front row and Dee and Chen next to him on the right.

Joining the Hakuhodo family has also brought many benefits for Chen, who co-founded digital solutions company Medialand in 2002. In the past, learning more about global business meant venturing outside Taiwan, she says, which necessitated frequent trips abroad. As part of the Hakuhodo Group, however, now Chen and her colleagues can draw on the diverse strengths of the international network.

“Joining Hakuhodo was a big leap—it’s not only Taiwan now, it’s international. It’s great!” Chen says enthusiastically. “We participate in the Hakuhodo Digital Network Summit, held every month, and I learn a lot from other countries, such as India and Vietnam. We can share our experiences together, and very importantly, the sei-katsu-sha research.”

Chen and her colleagues originally started out helping clients with their website interface design and coding with only five people working at Medialand. Everyone was working from home to save on office costs in the beginning. This helped to foster a culture of collective decision-making, which has continued at the company. “I began my career at Medialand so I have learned on the job—how to grow, how to do more. We cherish the spirit of partnership and collaboration,” she notes.

These values extend to the open-plan “people-centered” office layout that facilitates the spirit of co-creation and flow of ideas. “We want to focus not just on creation, but on our innovative ability and execution, and we want Medialand to be known for doing that, with our comfortable office space,” says Chen.

Taiwan has received international praise for its successful handling of the Covid-19 pandemic, but like much of Asia, it has seen cases rising again in recent weeks. Dee says that pivoting to working from home for two weeks last year was like a “rehearsal” for a more serious situation, and so people were well prepared for working remotely.

“The primary task now is how to keep our colleagues safe while serving our clients efficiently. Of course, some of our clients are also facing tough challenges and postponing campaigns or new product launches,” Dee says. “However, we are also finding some new marketing solutions and new opportunities.”

Chen agrees, and adds that Covid-19 has also ushered in a new kind of co-creation work model through virtual collaboration. “It has made us think about improving our skills, such as how to do good online presentations. We can use these skills even after Covid,” she says. “So, I think it’s a good opportunity to think of new forms of experiences for our clients.”

In the wake of the pandemic, Dee and Chen believe that online content and the e-economy will continue to grow in importance in Taiwan. Last year all of Growww’s associated teams started offering clients SKYLENS, a special data marketing solutions platform which was developed by MESh+. In 2019 MESh+ was established as a business unit of Medialand, and has now become an independent company within Growww to provide data marketing solutions for clients.

The SKYLENS platform is utilizing data in cooperation with Chunghwa Telecom (CHT), the largest telecom company in Taiwan. Using the target audience’s digital footprint as a base, SKYLENS offers comprehensive data marketing services, from market research, consumer definition and media planning/execution to post-buy tracking and retail monitoring. This helps clients to deliver relevant content to their audiences and direct them to sales sites and platforms. 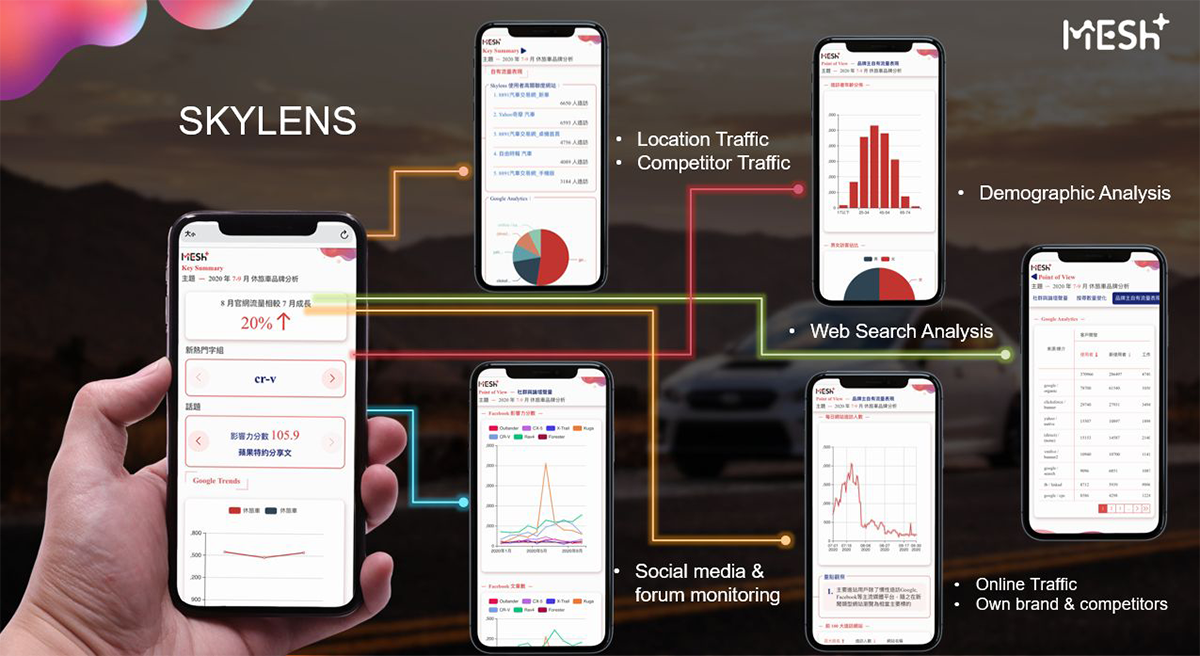 In terms of other trends, Dee sees helping clients to utilize 5G for maximum benefit and developing the appropriate digital service platforms as another topic of ongoing importance. “And I believe ‘crossover’ is a good thing for many clients—with other brands, with digital platforms, and with how to co-create new opportunities,” he says.

We’re all in this together

Medialand was going into its third year working with Coca-Cola, which is a sponsor for the 2020 Tokyo Olympics. However, when the games were postponed in March last year due to the escalating Covid-19 situation, everyone had to suddenly brainstorm a new concept.

Inspired by the simple yet profound question, “Where do I come from?”, Coca-Cola created 10 characters to represent the culture of various cities in Taiwan and produced 10 different can designs. Consumers embraced the campaign and the accompanying rap song and web content, leading to a jump in supermarket sales of 79% in just one month. 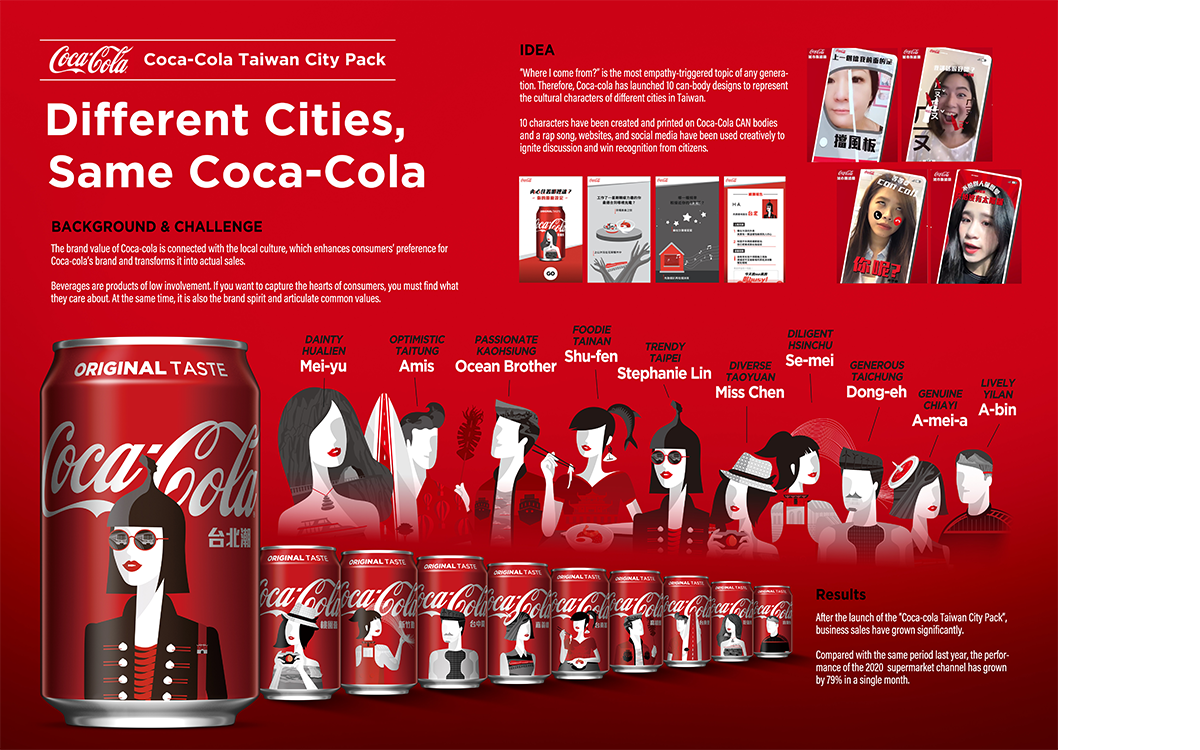 “The team and the client moved very quickly to change direction, and to think about the Covid-19 situation, too,” says Chen of the engaging campaign. “We thought of the idea of the Coke bottle as a symbol of culture: We come from different places, but we share culture and we came up that idea for the can design and the campaign.”

In fact, this concept of “different places but a shared culture” may help to explain the international success of Growww’s award-winning campaigns for clients such as Braun and Coca-Cola. While created for the local Taiwanese market, these works have won hearts and industry accolades around the world, showing that the most effective ideas are truly universal.

In terms of his personal philosophy in relation to his work and his team, Dee believes that being open-minded and open to sharing with others is of extreme importance. “I ask our team to learn together—to grow together and empower each other,” he says.

He also encourages his creative talents to go above and beyond with working with clients in the “initiative spirit.” “Don’t just only base things on the client’s brief—sometimes you have to think outside the box and take the initiative when presenting to the client,” he says.

Dee points out that these values are also espoused by Unisurf, which is notable for having a very young staff with an average age of 32. “Most of them are young creative people and so their work culture is very dynamic,” he says. Unisurf’s corporate culture is centered around respect for each other, always saying “yes” to the possibilities, playing ahead of the game and being mindful of EHS (Environment, Health and Safety).

With this dynamic combination of Growww’s strong client base and deep knowledge of the Taiwanese market plus Hakuhodo’s international network, we are sure to see more exciting developments from Taiwan in the near future. 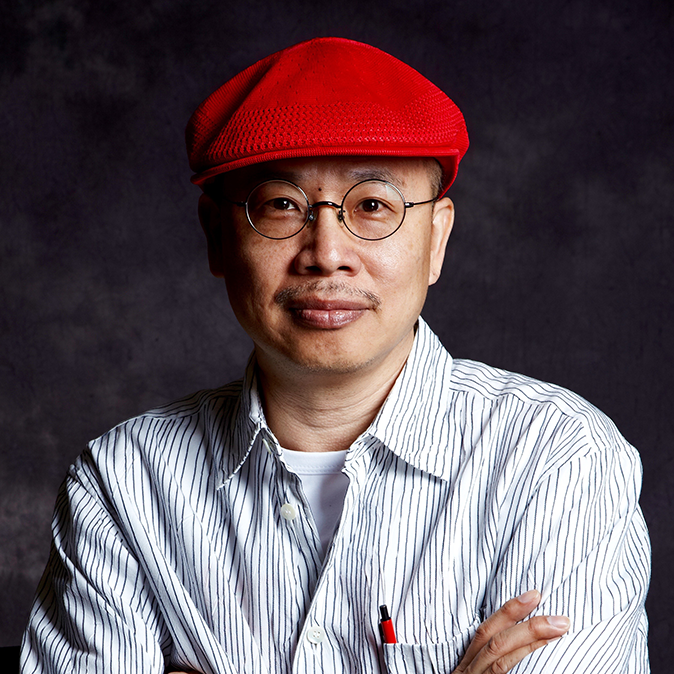 Michael Dee
Chief Creative Officer, United Communications Group
Known for both his passion for his craft and his signature red hat, Dee’s industry accolades include being named Creative of the Year in Greater China by Campaign magazine. He joined United Communications Group in 2017, and subsequently helped the Group to win Taiwan’s Agency of the Year in 2018. Dee has won multiple creative awards throughout his career, including Gold at Cannes International Festival of Creativity, Gold at London International Awards and Grande at ADFEST. He has been on the judging panel for industry award events around the world and is in demand as a speaker at forums. Dee has also served as EMBA lecturer for Tsinghua University and as an Honorary Professor at Nanjing University.

Kiki Chen
Co-Founder/Deputy Chairwoman, Medialand Digital Strategy Limited
Chen co-founded Medialand in 2002. The company grew from five to 100 employees in the first 10 years, becoming one of the largest independent digital agencies in Taiwan. She has more than 20 years’ experience in digital marketing and has worked with major global brands throughout her career. Projects led by Chen have won multiple industry awards. Since 2014 she has also served as a jury member at various advertising awards around Asia, including LIA Chinese Creativity, Effie Awards Greater China, Spikes Asia and AMES (Asian Marketing Effectiveness & Strategy) Awards. Chen is based in Taipei, where she shares her home with three lovely cats.
SHARE
Back to News & Insights