Winning Gold at the Young Lions: The inside story 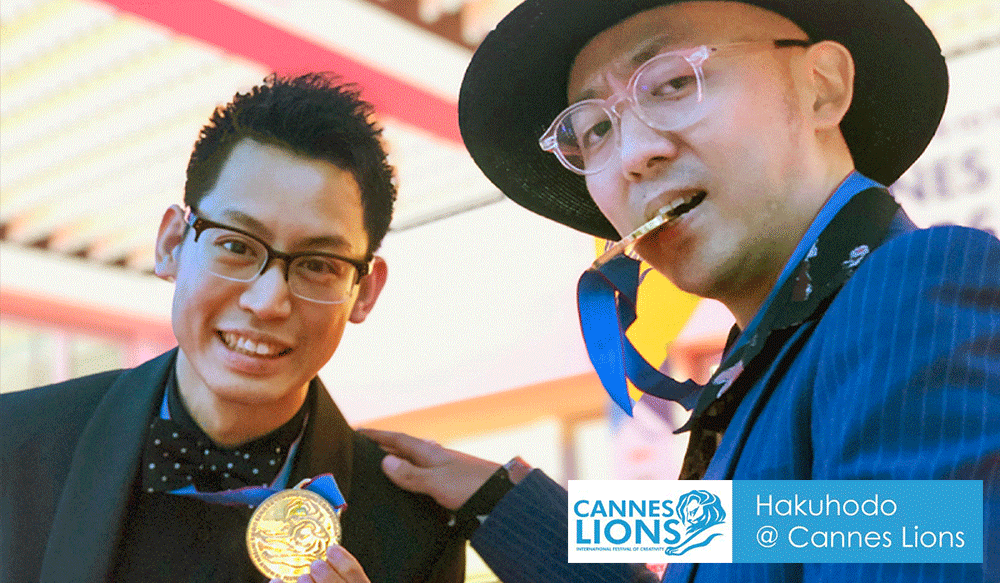 Taro Taniwaki (left) and Takumi “Anhelo” Sekiya, the first Hakuhodo Group team ever to win Gold in the Young Lions Competitions. The pair represented Japan in the PR category

A pair of young creatives from Hakuhodo have won the Hakuhodo Group’s first-ever Gold in this year’s Young Lions Competitions for creatives under thirty, which are held every year as part of the Cannes Lions International Festival of Creativity. They represented Japan at the Young Lions PR Competition after winning at the national level. Here we bring you an interview with the pair on how they became No. 1 in the world—an accomplishment they can still hardly believe themselves.

The brief: Raise awareness around the astonishing scale of the deforestation disaster and the direct link to our food

TANIWAKI:
The briefing commenced at 2:00 p.m. on Monday, June 17, the first day of the Cannes Lions festival. We arrived at Cannes on Saturday, just in case the plane was delayed—which happens every year—so by the time we arrived at the briefing, we’d had the whole of Sunday to recover from jet lag.

This year’s client in all categories was the World Wildlife Fund (WWF). There was a different brief in each category; in the PR category, it was to develop a PR campaign to inform millennials (people born between the 1980s and 2000s) how, in the process of producing different foods (particularly meat), forests are being destroyed on a massive scale as farmland is developed to grow crops as animal feed.

SEKIYA:
The two of us stuck around after the briefing and spent half an hour comparing whatever ideas came to mind. Taro suggested hacking the world’s most famous dinner, the Nobel Banquet. “That’s absolutely genius!” I told him.

I thought everything about the idea was great! Doing a stunt when the media was already present made perfect sense PR-wise—you didn’t even need to invite them to come. And while deforestation tends to be associated with bleak images, this idea would allow us to incorporate flashy visuals of the Nobel Banquet.

TANIWAKI:
When I pair up with Anhelo for a competitive pitch, he always acts as our creative director and makes smart decisions. He said he was comfortable with the idea, so that put my mind at ease.

It was now around 4:00 p.m. The deadline was 7:00 p.m. the next day, so we had 27 hours left. We had a long slog ahead of us, so we grabbed a quick bite at a hamburger joint, went straight back to where we were staying, and set to work.

Taro at work in one corner of the spacious room

TANIWAKI:
We shut ourselves up in the room exploring lots of alternatives to the Nobel idea, and we thrashed out every one of them. But we failed to come up with anything really exciting, so around midnight we both made the final decision to build on the Nobel Banquet idea.

We had 18 hours left. We then developed the story in a single go, and when the new day dawned, it was off to the competition venue, where we had to work away furiously preparing ten slides.

SEKIYA:
Talking about accommodations, having a good place to work is absolutely vital. When we took a crack at the Young Lions three years ago, we had to brainstorm at an ordinary hotel with nothing but a bed and a tiny desk, or go to a coffeeshop. It was impossible to concentrate, and the stress kept building up. Ever since then we’ve agreed we need to get a place that has a nice big desk to work on and a nice spacious layout so we can each work separately. That’s much more efficient and conducive to concentrating. This year we rented a detached one-bedroom house which was a ten-minute drive from the festival.

A clear division of roles

TANIWAKI:
There was a well-established division of roles between Anhelo and myself.

I’m the presenter, so I work out the overall logic and the storyline of the proposal, and draft the exact text, in a way that’s easy for me to deliver. Anhelo handles all the design stuff, like knocking the presentation into shape and preparing the illustrations.

Once the proposal is ready, I rehearse the presentation for hours. Meanwhile Anhelo keeps checking over the presentation materials, identifies any holes, and compiles a thick set of scripted answers to any questions that might arise during the Q&A.

SEKIYA:
Taro is good at practical stuff. I look over what he’s done and completely revise it. I think I’m better than he is at seeing our proposal in the round and looking at it through the jury’s eyes.

TANIWAKI:
To be honest, I just hate having my work checked by Anhelo [laughs], because he nitpicks at every word I’ve written. But his criticisms are dead on. They reduce me to silence. I keep thinking, “Oh no, not another rewrite!”, but every time it definitely gets better.

At this year’s Young Lions, too, we kept rewriting and rewriting, and we didn’t submit our package until the very last minute.

Now let us explain our proposal with the slides we submitted. 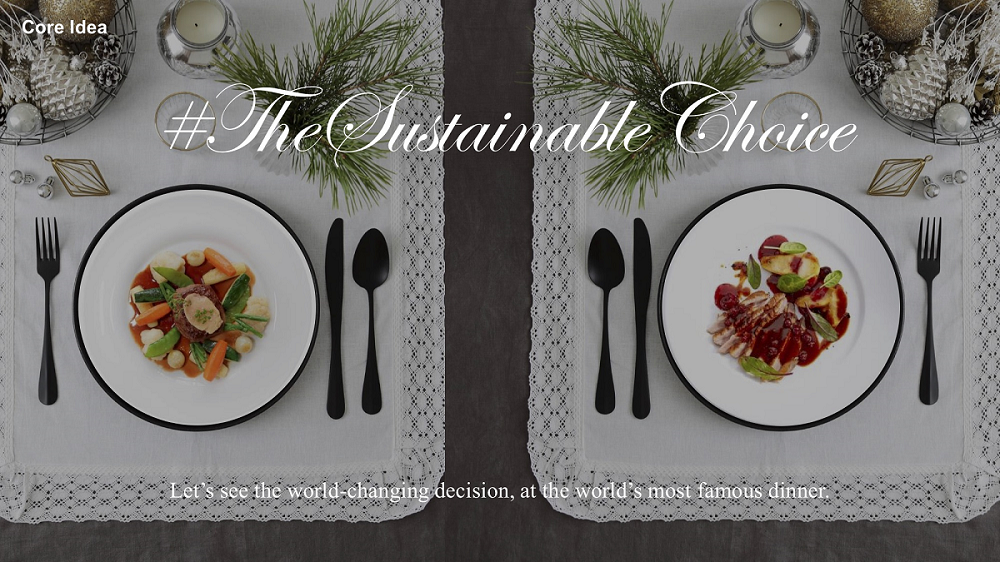 As I’ve already said, our mission was to raise awareness among millennials of how food production leads to deforestation. But we felt that just raising awareness wasn’t enough. It was a far cry from truly solving the problem.

Our real target audience was industry leaders, including politicians, because solving the problem requires that they start taking serious action.

So what solutions are available? When you truly come to grips with the issue, you’re confronted by two options. The first is to keep eating meat, in which case efforts are needed to ameliorate the situation by streamlining production methods and reducing consumption. The other option is to eat meat substitutes like soybeans, seaweed, and insects. That’s ecofriendly, but meat-lovers won’t be too happy about it.

We decided to foist these two options on the industry leaders just referred to and force them to state which they preferred—before the eyes of the world. 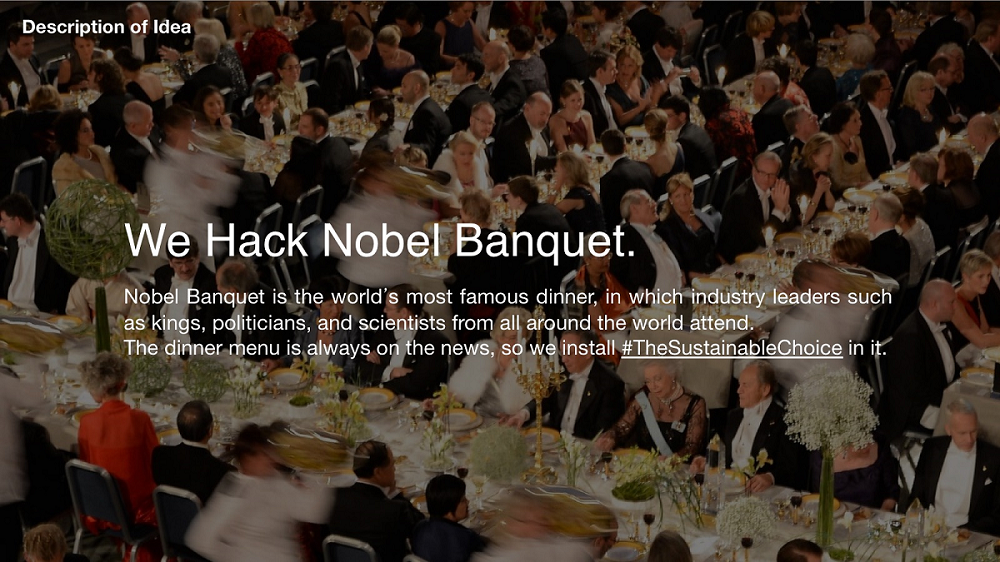 We therefore decided to focus on the Nobel Banquet, which attracts worldwide interest. It’s the world’s most famous dinner: even the details of the menu are reported every year in the news.

Our idea was to hack the event and offer a choice of two main dishes. One was a regular meat dish, and the other was a meat substitute made with, say, insects. Those who selected the substitute got off scot-free, but those who opted for meat had to sign a pledge to take action to solve the problem. 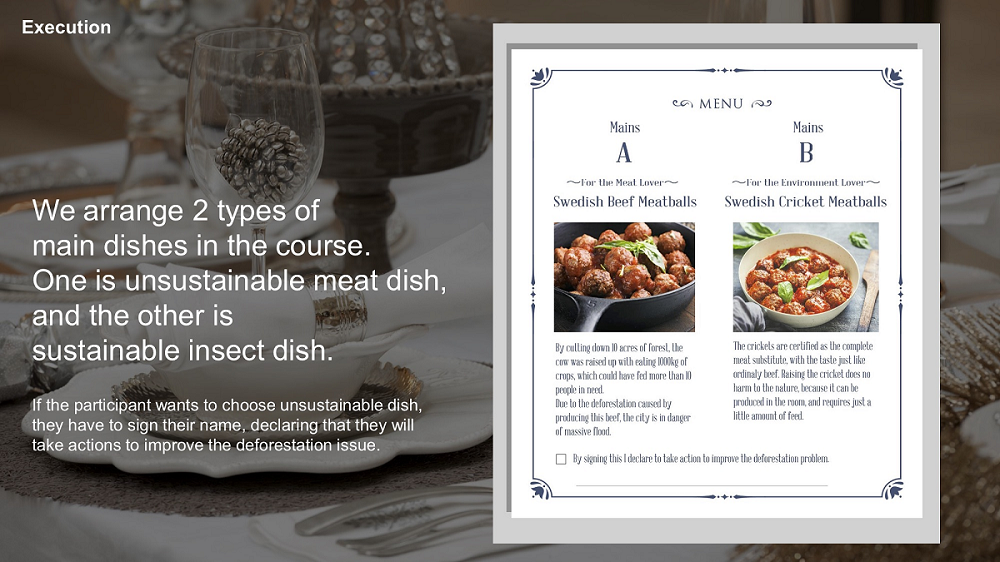 Everything would be on the news—what dishes were served, which celebrities chose which, what action they were going to take. That in turn would make people at large, including millennials, aware of the problem, get them thinking, and spur them into action. That was the story we devised. 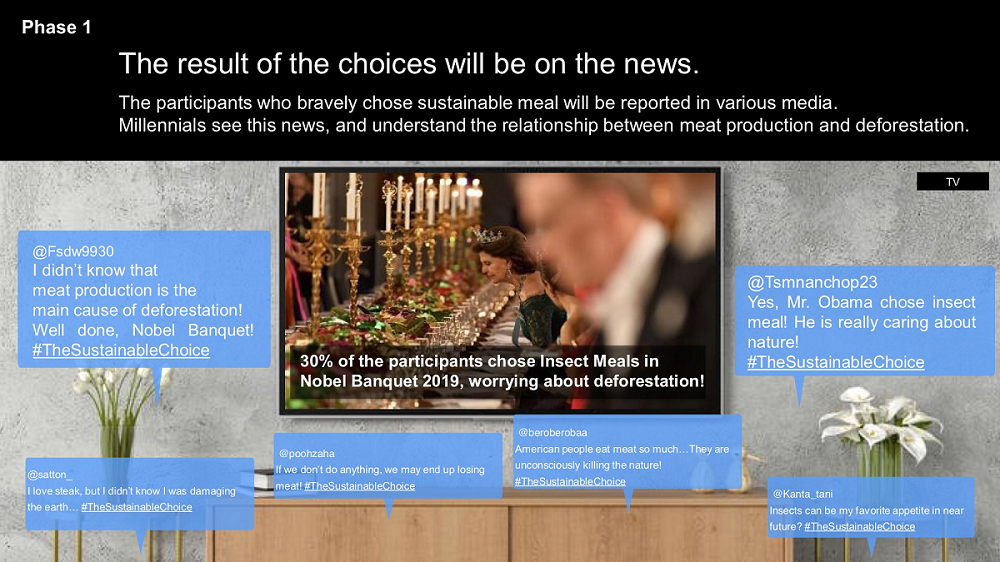 The presentation: The key is to be entertaining

TANIWAKI:
The idea was in a way dead-serious, so it would have been depressing or boring if we had just presented it straight. So Anhelo decided we should make the presentation fun and entertaining instead.

SEKIYA:
We’re young, I thought, so the jury must want to hear fresh, lively ideas. And a presentation that was just plain fun should resonate with judges exhausted after hours looking at entries.

All the judges on the PR jury this year, by the way, were westerners and women, and we’re neither, but we looked on the bright side. A couple of young Asian guys giving a fun presentation might just make a favorable impression, we figured, so we tried spicing things up with some lighthearted humor.

TANIWAKI:
I think we managed to pepper the presentation with some amusing little twists, like pretending the judges were Nobel Banquet guests and getting them to choose from the menu, and playing classical music to create the right atmosphere. That enabled us to end the presentation on a high note. I figure those little twists were, along with the content of the proposal itself, what earned us such high marks for creativity.

Daring to go beyond the brief paid off. We’re now No. 1 in the world

SEKIYA:
We had two concerns as we waited for the results.

First, our proposal wasn’t “on-brief” (exactly what the client asked for). We thought that raising awareness wasn’t enough; people needed to be galvanized into action. We thought that appealing to millennials wasn’t enough either; leaders who had national and global influence needed to be targeted. Thus, our proposal went beyond the parameters set by the brief, so we were worried it might be considered off target.

Our second concern was that, since topnotch planners and creatives from 31 countries were competing for the prize, another team might have concocted a brilliant proposal that surpassed ours and was on-brief to boot.

Such thoughts filled us with anxiety, but in the end we…won!!!! We’re glad we hung in there and never gave up. We’re now No. 1 in the world, though I can hardly believe it. 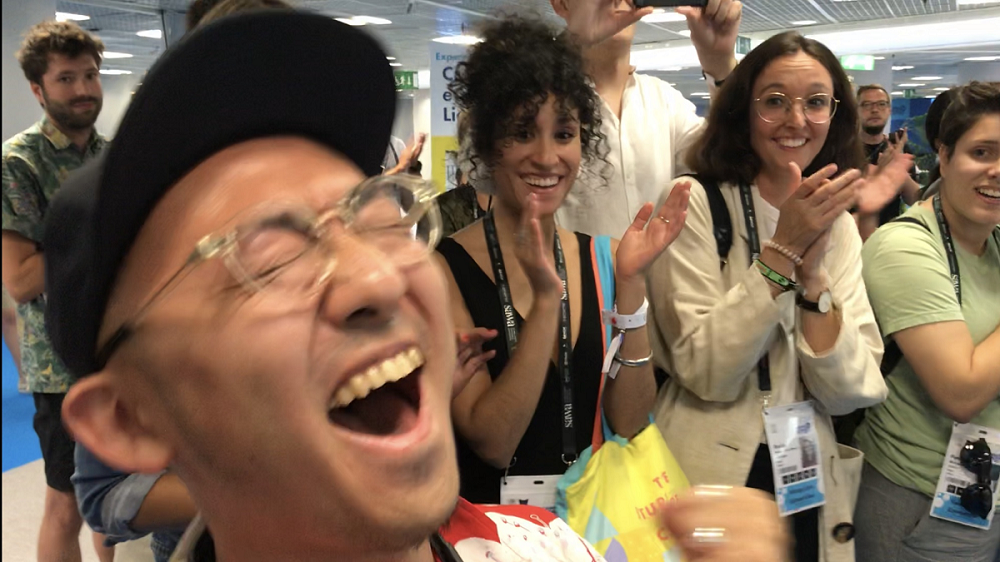 The judges all agreed: Team Japan was in a class of its own 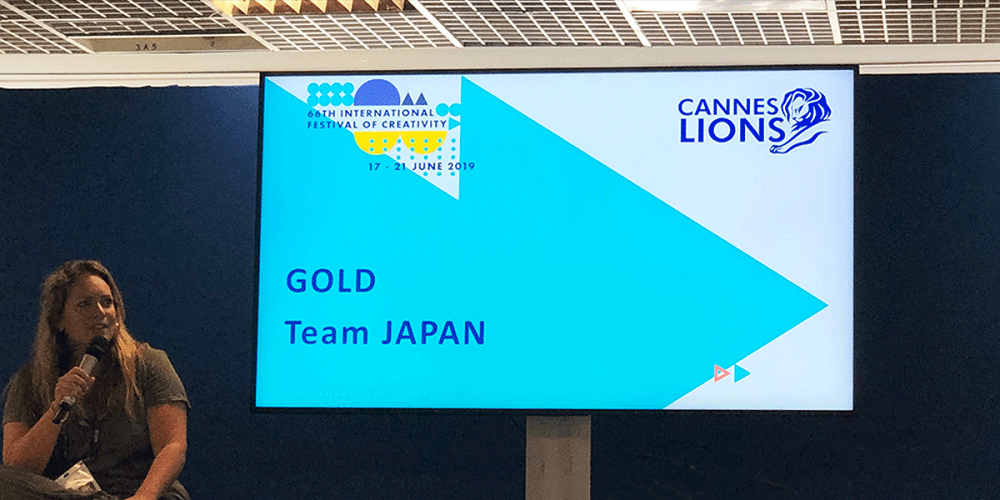 TANIWAKI:
What the judges emphasized most in their appraisal was that Team Japan took a completely different approach from the other teams and came up with a completely different story. They said that it was far and away the most impressive of the 31 teams, so much so that even when they were listening to the other presentations, they couldn’t get Team Japan’s idea out of their heads. Now that was gratifying.

SEKIYA:
They said that not only was the core idea strong, but the story was consummately crafted in how it unfolded from one phase to the next, the way a PR campaign was supposed to. A great PR project doesn’t solve the challenge in one fell swoop; it works over the longer term while having a cascading effect.

This is Japan’s first medal in five years in any Cannes Young Lions category. And it’s a first for the Hakuhodo Group. Takumi Sekiya and Taro “Anhelo” Taniwaki’s Gold medal has raised Japan’s profile at Cannes.

TANIWAKI:
Winning the Young Lions competition at first seemed such an ambitious goal that we hardly dared talk about it. But by working away frantically for all we were worth, we made the grade.

A lot of people of borderline age, like 29 or 30, say they’re too embarrassed to enter the contest, but there’s absolutely no reason to be. Just keep doing your level best. 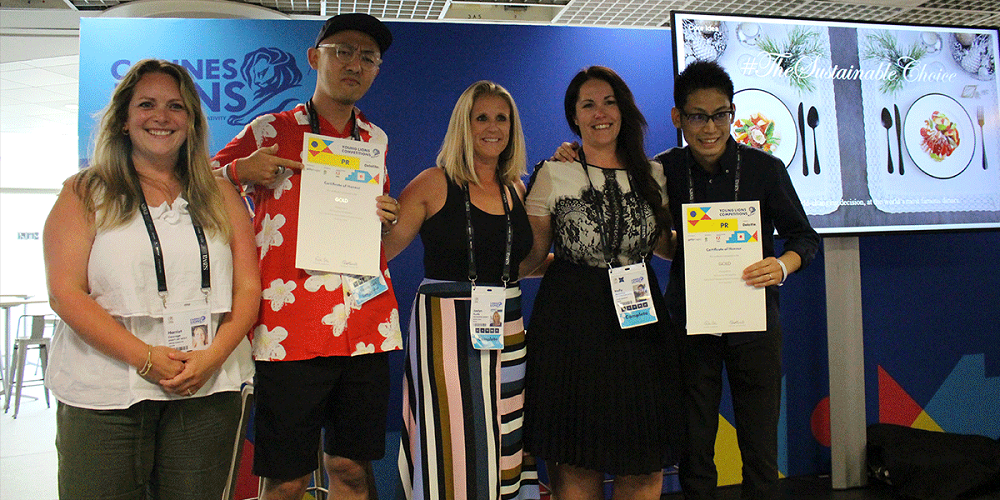 SEKIYA:
Continually challenging ourselves has taught us through experience that perseverance pays off. Losing the first time was a real downer. I never wanted to do this again. But if you hang in there without getting discouraged, you build up your knowledge and grow as a person. The world looked so different on our second foray to Cannes.

We look forward to seeing Team Japan on the podium again next year! 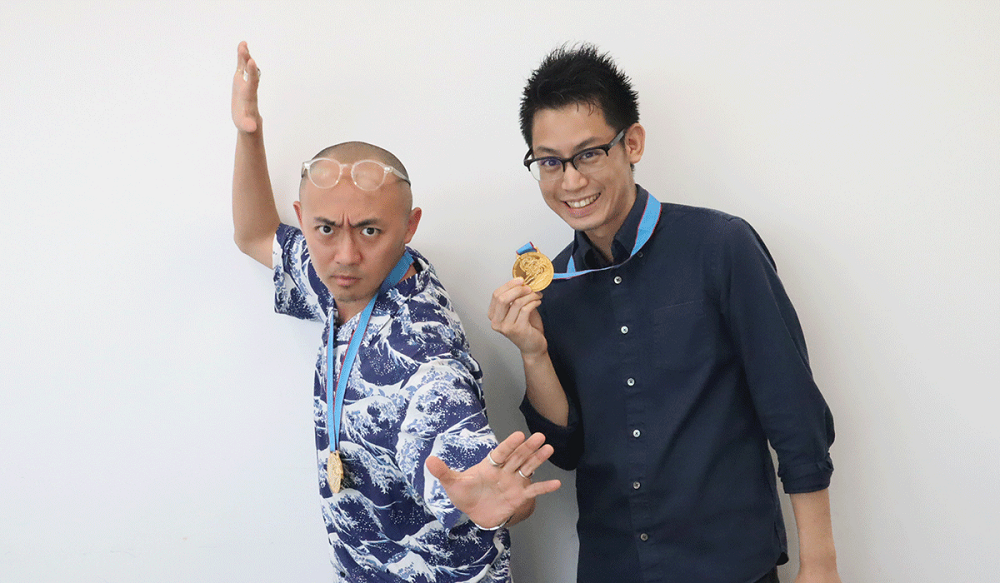 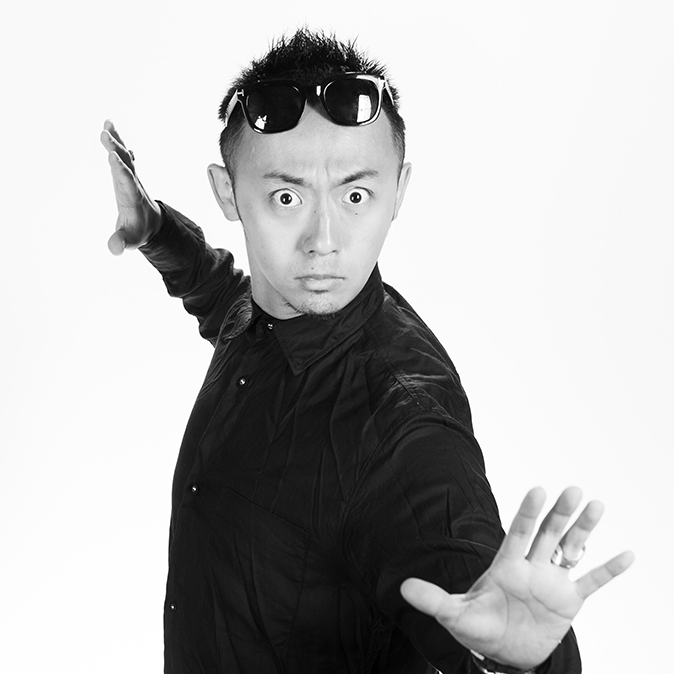