How technology plus creativity is transforming shopping

This year’s Cannes Lions, the world’s largest celebration of creativity, took place June 17-21 in the French resort of Cannes. The theme of this year’s Cannes Festival was “See the Future of Creativity.” In this report, Kyohei Hasegawa, Planner of Hakuhodo Inc. describes the main trends in evidence there, focusing particularly on how technology plus creativity is molding the future of shopping. 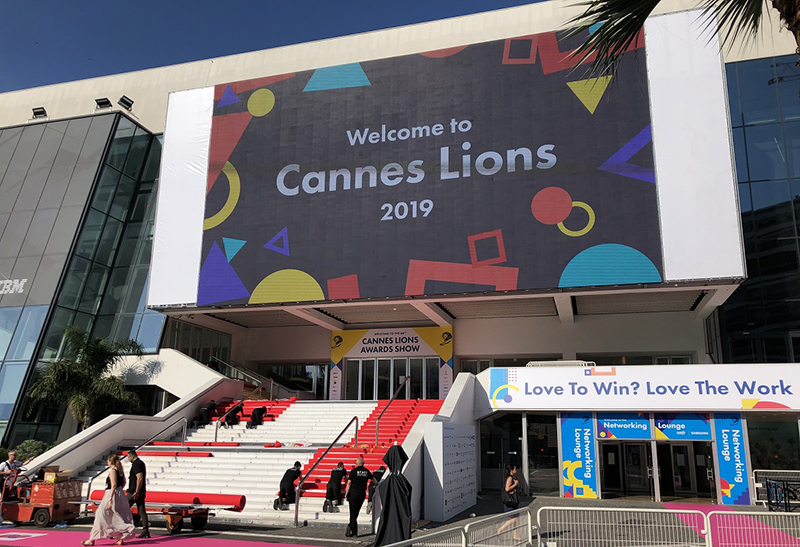 This was my first visit to the festival in three years, and during that time technology has progressed by leaps and bounds, dramatically reshaping the global marketing landscape. What with the rapid spread of e-commerce, advances in AI technology, the explosion in static and dynamic data, the advent of new methods of payment, and the multiplication of purchase channels, the march of technology is now transforming the shopping environment. As marketers worldwide struggle to keep up with these changes, never has interest in creativity as a catalyst for activating people been greater. 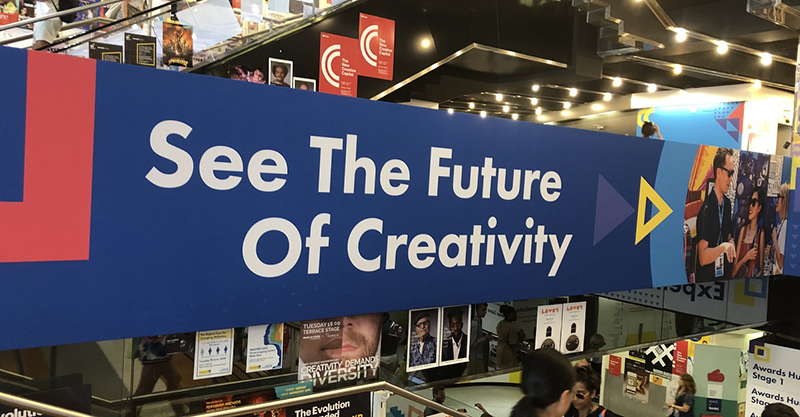 One of the brands that stole the show at this year’s Cannes was Burger King, now a familiar face at the festival. Its campaign “The Whopper Detour” netted an impressive haul at this year’s awards, including Grands Prix in the Titanium, Direct, and Mobile categories. 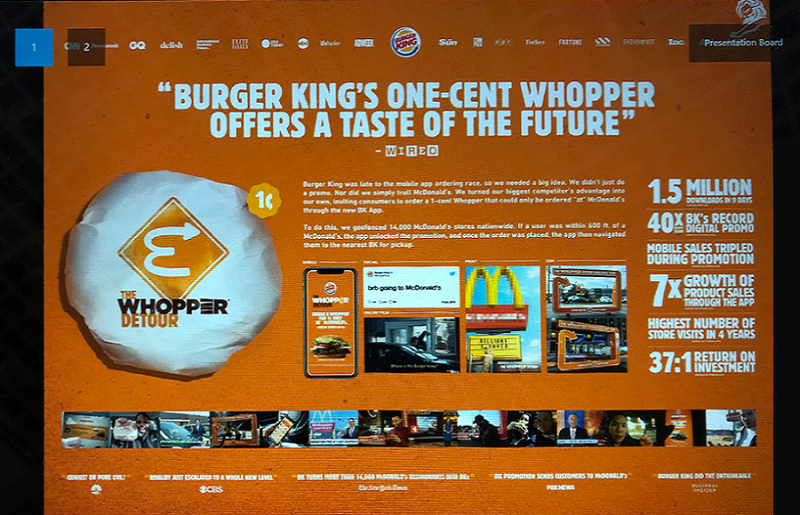 Customers received a coupon for a one-cent Whopper via the app—but only if they were in the vicinity of a rival hamburger chain. The technology worked like this: Burger King geofenced its rival’s restaurants all over the US (14,000 of them!), and the mobile coupon could only be downloaded within those areas. While the technology itself was old hat, the campaign made skillful use of GPS data to pinpoint the very moment you had a craving for a hamburger, and people couldn’t resist the idea—all the more so because the mischievous Burger King brand character is always mercilessly trolling his rival. The campaign paid off businesswise as well: 1.5 million app downloads in nine days, double the volume of sales via mobile devices, and the highest store visits in four years.

Similarly, with the “Burn That Ad” campaign from São Paulo, when you displayed a competitor’s ad in the app with your device’s camera, it instantly went up in augmented-reality flames; then you got a coupon. And the campaign had a message, that Burger King’s patties are flame-grilled. 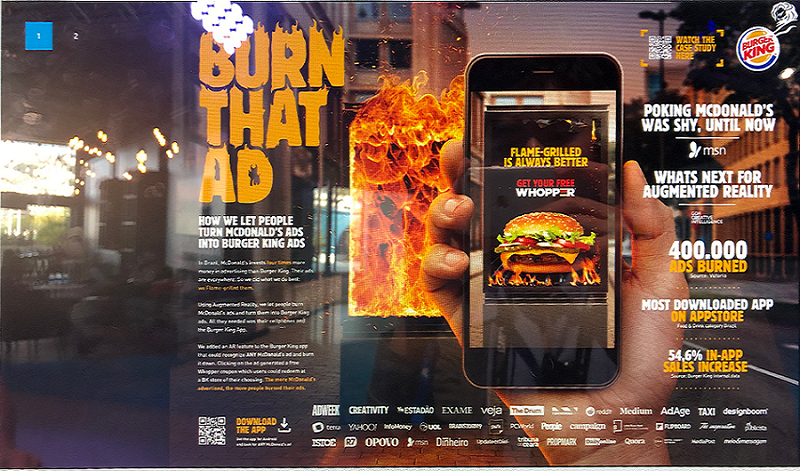 Another idea that got people talking was “The Traffic Jam Whopper” from Mexico City, where congestion is a daily headache. This is a Whopper delivery service that uses GPS data from the app to identify gridlocks and is synched with digital billboards. 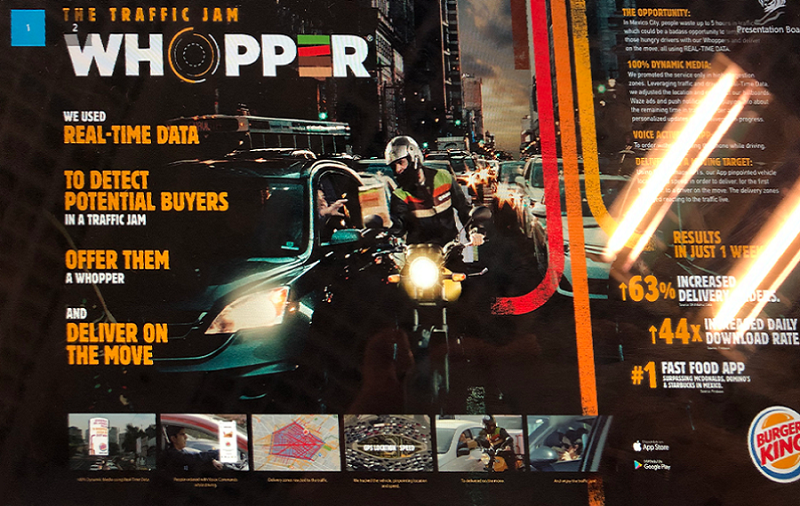 That is a great example of how, by merging technology with branding, Burger King is creating new marketing moments for the Whopper where they never existed before.

Burger King emphasized during its seminar that it focuses on forms of creativity that aren’t (classic) advertising. Specifically, it cited three elements: the design, the technology, and the product. These play a particularly significant role in smaller markets like Brazil and Mexico City where budgets are limited. Burger King’s global chief marketing officer is, as is well known, a qualified lawyer. Fast food is one industry where advertising is said to make a big difference, yet Burger King unerringly pulls off activations that go beyond advertising such as only it could, and it pushes boundaries in the process. That is the wellspring of its creative excellence and strength as a brand.

Another major topic of interest this year was the way manufacturers are turning services into a new source of competitiveness. L’Oréal is one brand that has been rapidly implementing the digital transformation in recent years. It is investing in many different areas such as enhancing digital content and leveraging data, not to mention strengthening its e-commerce business.

One insight offered during the L’Oréal seminar deserves special mention: “Services are the new products.” The presentation mentioned that last year L’Oréal acquired ModiFace, which owns patented skin and facial image analysis technology, and described how L’Oréal is strengthening engagement with customers by offering skin diagnosis and hairstyle simulation services using its app, as well as implementing initiatives that leverage personal data.

P&G had a booth at the festival where a prototype of a future technological service called Life Lab was on display. This showcased several prototypes, including one of a smart mirror for retailers that determines skin age and provides skincare advice, and another of an app-based service that uses AI to simulate how your face will look in twenty years if you fail to take care of your skin. 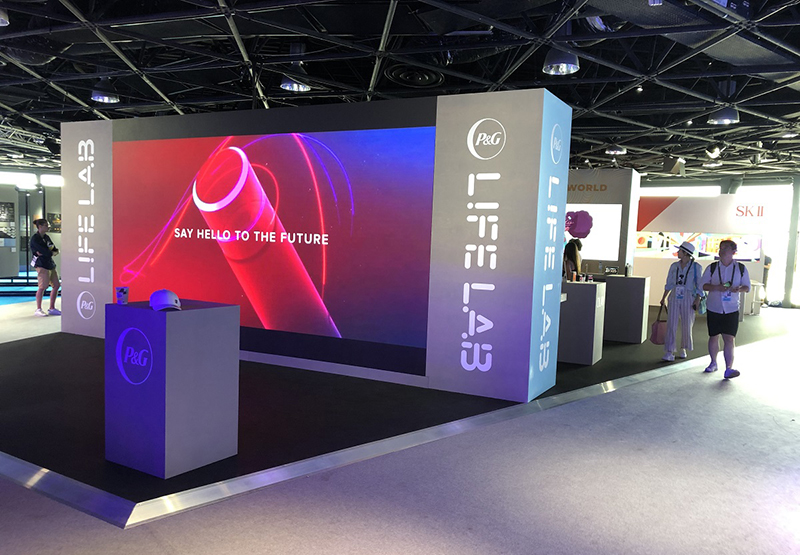 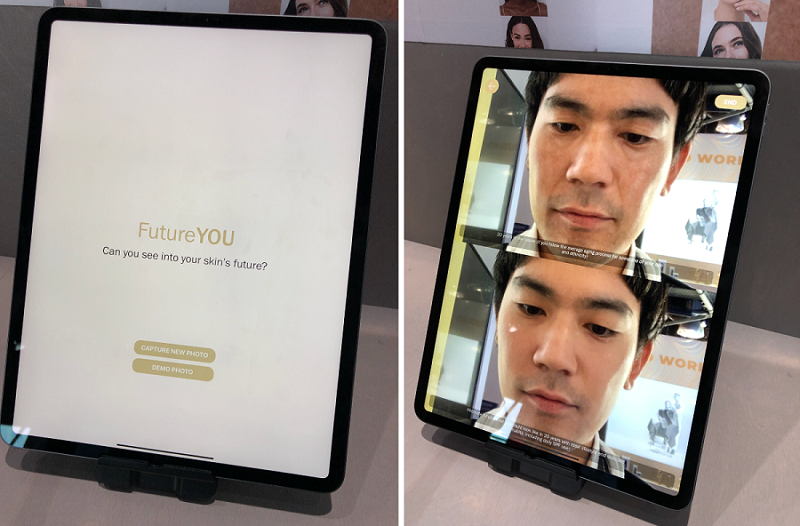 Take a selfie with the tablet, and AI will show what you’ll look like in 20 years if you don’t take care of your skin

Thus manufacturers are turning their attention to services that solve their customers’ concerns, rather than simply selling products. That shift can be attributed to the recent advent of D2C (Direct to Consumer) brands, particularly startups, that do all their branding, sales, and CRM online and have attracted a devoted following by catering to their customers’ exact needs. They have the advantage of being able to acquire the data essential to building a brand and understanding customers through direct contact with their clientele; on the flip side, that strategy only works because they target a niche market.

Hence giant manufacturing brands like L’Oréal and P&G, which cater to the mass market, are now beginning to change course by investing in services. By coupling technology with services, manufacturers are poised to forge bonds with customers rooted in new brand experiences, as they engage directly with customers by developing more sophisticated services to solve their needs with technology, and take a more personalized approach by utilizing the data so acquired.

Creating a new form of commerce with technology plus open platforms

The final subject I wish to address is the emergence of new ways to shop.

China’s Tencent went to considerable effort to raise its profile at this year’s Cannes; in particular, it presented several seminars. The theme of its first Cannes seminar was the new form of commerce that is emerging via services offered on the social platform WeChat, which completely dominates the Chinese market. In China, which is a step ahead of the rest of the world when it comes to digital shopping—the growth of the ecommerce market, the percentage of cashless transactions, the rise of new retail—Tencent foresees a coming “era of social commerce” in which online and offline will be integrated. 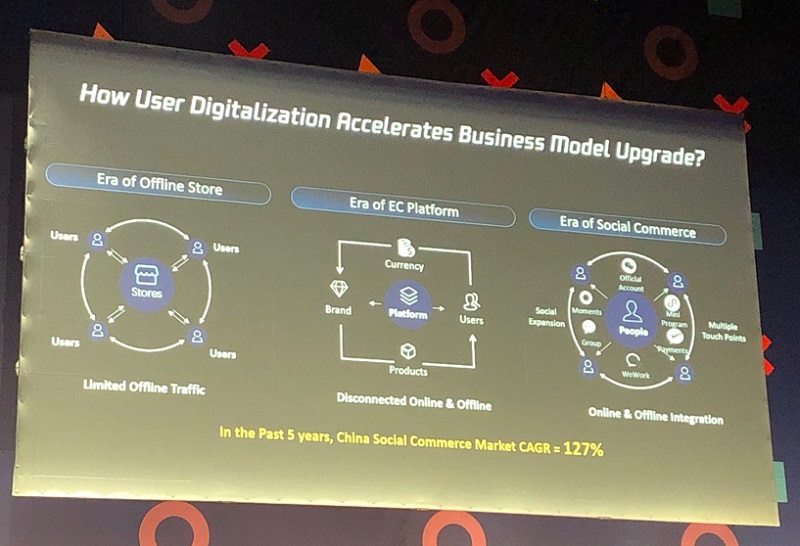 Mini-programs, one of the features of WeChat, let individuals and businesses freely create their own apps on WeChat with very little effort. It thus enables, for example, small stores that don’t have the money to develop an app to set up their own online shop and loyalty program. It also provides individuals with a forum to deliver services. 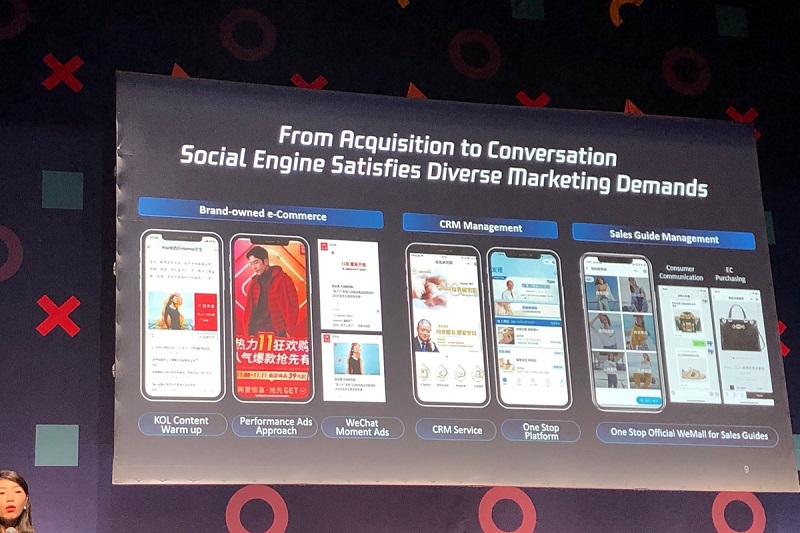 A platform on which brands can conduct e-commerce, CRM, and even sales management

A case in point of that platform being put to good use is the “KFC Pocket Store” campaign dreamed up by KFC in Shanghai, which won Gold in the Mobile and Creative eCommerce categories. 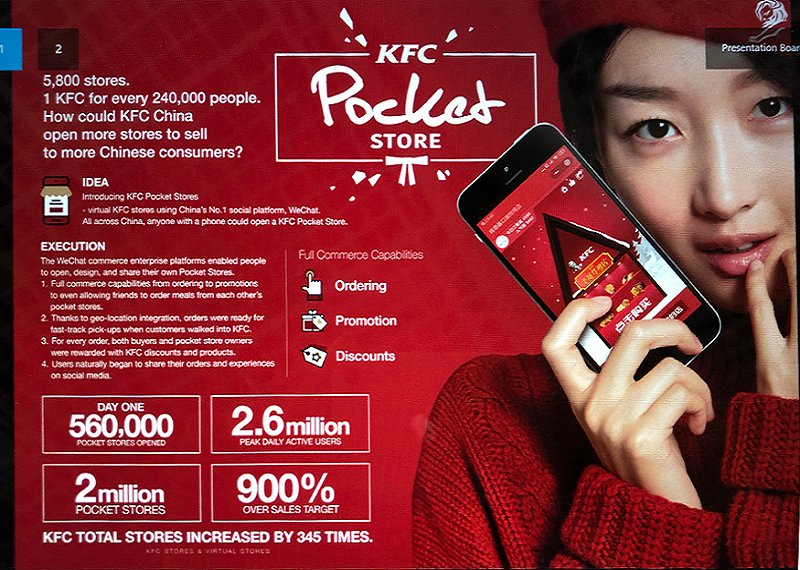 KFC, which still doesn’t have that many outlets in Shanghai, launched a mini-app campaign that let users design and open their own customized KFC pocket stores in WeChat. They were able to take in-store and delivery orders and conduct promotions. Store owners got a cut from every order, so friends eagerly ordered from each other’s pocket stores. The campaign did amazing things for sales: 560,000 pocket stores opened on the first day, and one indefatigable owner has chalked up a million dollars in sales.

This is an obvious case of social commerce in action: a social platform company not just offering its own services and apps, but also making its platform available to other companies and individuals as a forum to deliver whatever services they like, so that fans of a brand can open their own virtual stores and the product can be bought and sold through friends. There were quite a few empty seats at the WeChat seminar, but I thought the KFC campaign was the perfect example of how creativity is taking the shopping experience to a new level by leveraging a platform as a way to activate people, thus bringing into being a new way to shop. In China this trend toward making platforms open is progressing in other fields as well. The question now is how social commerce will spread to the rest of the world.

This report has examined three trends brought to light by asking how shopping will evolve as technology meets creativity. Our analysis reveals that shopping behaviors quite unlike those we’re familiar with are emerging as a result of brand actions that put the individual front and center.

Achieving both these ends by marrying technology with creativity will drive the evolution of shopping. That, I believe, is the future of creativity as heralded by this year’s Cannes Festival. 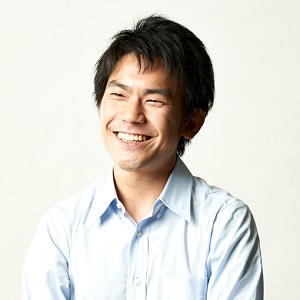 Kyohei Hasegawa
Planner, Hakuhodo Inc.
Kyohei assists clients in the retail, CPG, telecom, and other sectors with upgrading their marketing capabilities by utilizing their customer data and leveraging Hakuhodo’s Sei-katsu-sha Data Management Platform. He is also working on developing a media service business capable of delivering new information experiences in an urban setting by synching outdoor media, including digital signage and mobile.
SHARE
Back to News & Insights