Hakuhodo’s creativity has the power to produce Unimagined Ways. We increasingly encounter challenges that cannot be solved with conventional ideas reached through logical approaches. Hakuhodo breaks through these challenges and creates new value with Unimagined Ways that break with convention. The buds of various such solutions have already emerged and the challenge of opening the way to the future has begun.
In this series of interviews, we ask Hakuhodo Group people who have used creativity to produce and implement Unimagined Ways about the genesis of their breakthrough Way. In this first article, we talk to Creative Director Satoshi Chikayama, who worked on the COGY project. 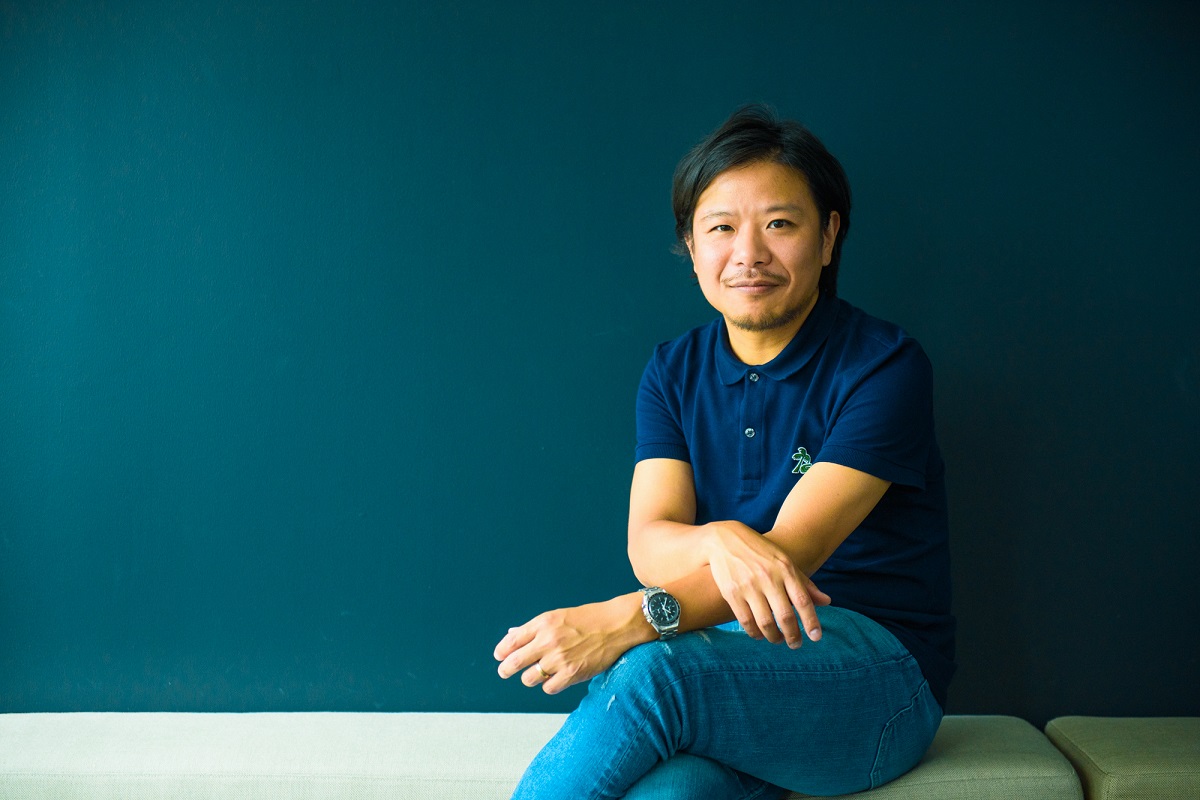 Make COGY the Apple of the wheelchair industry

How did you become involved in the COGY project?

COGY is a wheelchair that is propelled by pedaling. It is engineered to trigger pedaling movements even in people with paralysis on one side from a stroke or who find it difficult to walk due to spinal injury. Developed and sold by TESS Co., Ltd., a company based in Sendai, we provided planning support for branding the pedaled wheelchair to popularize it.

I got on board in 2016 after my then colleague told me he’d found a company working on really cool project and asked me if I’d like to come and meet them. When he first told me it was a pedal wheelchair that even people who can’t move their legs can pedal, I thought to myself, “does such a thing even exist?” But actually seeing it and listening to TESS’ president, Kenji Suzuki, I became convinced that it was a revolutionary product. I thought it had the potential to turn the general perception that someone in a wheelchair can’t use their legs on its head.

The name COGY is catchy

The wheelchair was originally called “Profhand” after its inventor, Yasunobu Handa, Professor Emeritus of Tohoku University. But if you want people to use it around the world, you need a name that will work for people everywhere. We relaunched the wheelchair with the name “COGY,” which evokes the Japanese word for the verb to pedal, kogu, in a name that is easy-to-pronounce for non-Japanese, too.

But priced in the 300,000-yen range, a COGY will set you back around the same as an electric wheelchair. I knew the key to this project would be creating a reason for choosing the COGY anyway. So, the direction I gave the team as creative director was to “make COGY the Apple of the wheelchair industry.” Just as the advent of the iPhone gave birth to a totally new genre in the mobile phone category, we would give wheelchair users a totally new option. In short, we would create a choice between a wheelchair or the COGY. This led to the concept “The wheelchair for those who still believe.”

“The wheelchair for those who still believe.” It feels like a concept that directly hits the emotions

We meant “Choose this wheelchair if you want to move your legs by yourself” and, of course, we expected to receive some opposition. For instance, that we were saying that people who use regular wheelchairs have given up. Plus, depending on the condition of their legs, some people will not be able to pedal even a COGY, such as those with total paralysis in both legs and those whose joints have become frozen and immovable. Imagining the feelings of various people, I hesitated about putting this copy out in the world.

But in the end, I decided to risk causing a stir and dividing opinions. Whether it was the right thing or not, I wanted to give the world something new. TESS President, Kenji Suzuki, and every member of the project bought into the idea and backed me up. If there was even a hint of doubt from me or anyone else, I am sure we would have ended up with a more innocuous and inoffensive catchphrase. 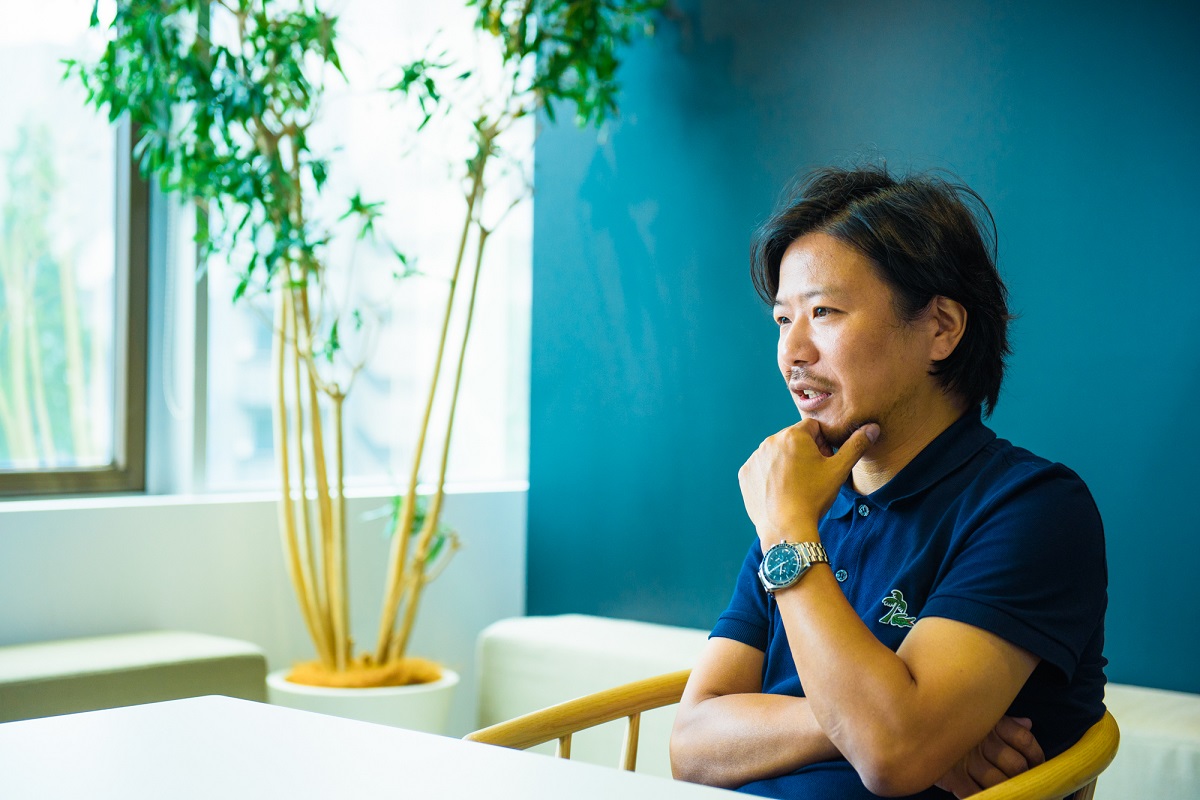 The courage to propose new options to the world

How were you able to take such a challenging approach?

Because the product is incredible. I tried it out and it is like magic. Just placing your feet on the pedals and applying the tiniest pressure will move you forward, and once you build up some momentum, you can go and go. The mechanism came out of research done at Tohoku University. It is really simple, taking advantage of spinal reflex, an innate reflex that causes a right foot-left foot stepping motion. We know of instances where sitting in a COGY and moving the legs has improved users’ everyday life, such as promoting communication with others. The physical and mental are connected. I believe that the COGY has the potential to stimulate various human abilities.

I was moved by something President Suzuki said: Everyone is enthusiastic about rehabilitation immediately after losing the ability to move their legs, but they lose their motivation if they can’t see any progress. But much later, many regret not having been more conscientious about their rehabilitation. President Suzuki said he wanted to position COGY between these two points. When I heard that, I knew I needed to do my best. Even now, I get emotional and tear up when I talk about COGY.

I met many people and made a lot of discoveries about COGY when we filmed that. One man that participated in the movie was so overjoyed to be able to move his legs that he bought a COGY immediately after filming finished and now promotes the wheelchair via social media. Meanwhile, we also received feedback from the woman who did the best in the COGY when we were filming, saying that although she liked the product, the regular wheelchair she currently uses is her means of getting around, and she didn’t need anything more than that for now.

It goes without saying that people who are unable to move their legs will have differing ideas and values, too. Many people who experienced the COGY say that it was fun, but just because it is fun doesn’t mean that everyone will use it or buy it. We tend to come up with an ideal story for a particular user, but I realized again that users have different stories and diverse values. 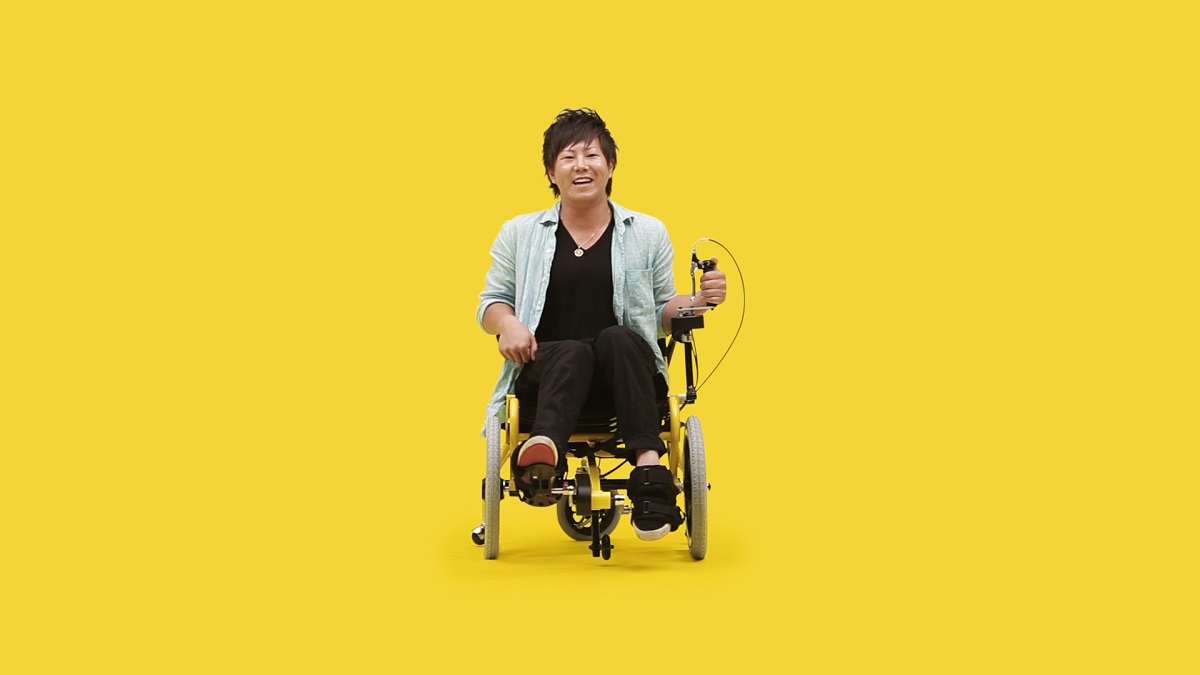 One person who tried the COGY said, “Before I gave it a go, I thought it wouldn’t work for me, but once I tried it, it was so easy and it felt great”

Were there any memorable responses after the documentary was released?

We had many queries from family members and supporters other than wheelchair users themselves, asking questions like, “This is my Grandmother’s situation, would she be able to use the COGY?” In the movie, we recorded the surprise and excitement of companions as well as wheelchair users. We needed to let people around them know about it, too. When you think about it, it’s obvious, but this, too, was a discovery.

As I mentioned earlier, there were some sensitive aspects to launching the COGY and we had many worries about how we should go about it. But with courage and the desire to give the world a new option, I was able to move forward. 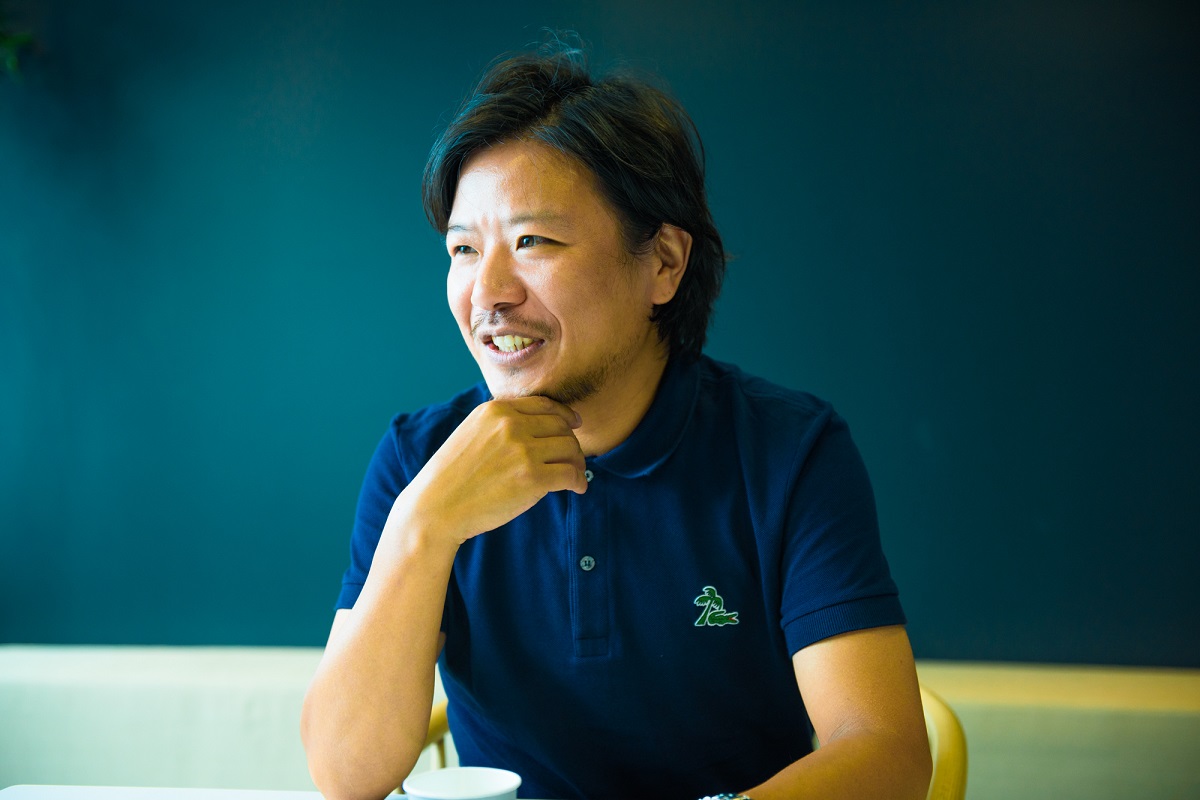 Unimagined Ways have no end

What was the genesis of the Unimagined Way in the COGY project?

In this case, I think it would have to be the moment I came up with the “The wheelchair for those who still believe” concept, and actually that was fairly early in the piece. Initially, TESS explained the COGY with the phrase “pedal wheelchair” and in all honesty, you couldn’t come up with an easier to understand product explanation. We had an amazing new wheelchair, but getting people to understand just how amazing it was was going to be hard. Our job was to help with that. We had the most conventional of conventional solutions in front of us, and that’s exactly why I thought we needed an Unimagined Way.

If you want me to pinpoint the exact moment of the breakthrough, that might be the first time I heard about the COGY. Half dubious that such a wheelchair actually existed, I also felt really excited.

The COGY project was like the start of something, a project that created a prototype for launching something that could become a fixture in the future

I think it was probably pioneering. If you can demonstrate a model for how society will be in the future that everyone can get on board with, people will get interested and get around it and get involved. Among the projects I’ve been involved in, I think Restaurant of Mistaken Orders (from 2017), where people with dementia serve in a restaurant, provided a new model for a future that will come one day. Thanks to help from people who support the model, the restaurant has been expanding throughout Japan. In the future I would like to keep taking on this kind of cutting-edge challenge.

I think you can say that there is no end to Unimagined Ways. Probably each Unimagined Way has its own Unimagined Ways, which in turn also have their own Unimagined Ways. I think that if you are always thinking and always questioning whether this is the best and if there isn’t some Unimagined Way, then both the projects you work on and you, yourself, will grow. When I look at senior creatives that I admire, the really good ones come up with a Plan A, a Plan B and a Plan C, and when Plan A becomes a big hit, I might say “Way to go!” but they will still be wondering whether Plan C would have been the better choice. I think Unimagined Ways are akin to a philosophy.

As the world changes at warp speed, if we don’t come up with and advance Unimagined Ways quickly, I don’t think the world will change for the better. Of course, long-running brand campaigns and projects that capture universal core values are extremely valuable, but I want to keep thinking about whether they, too, don’t have some Unimagined Way; I don’t want to be afraid to come up with a new way unlike anything before. 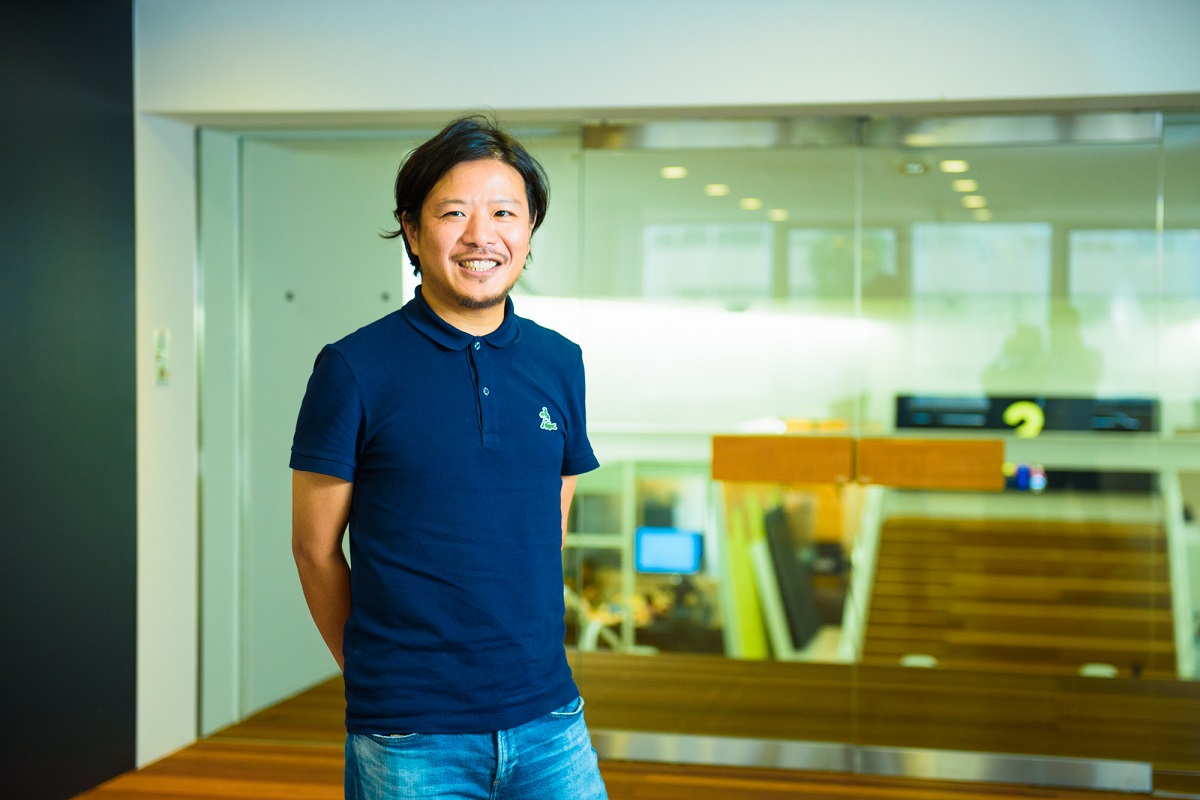 Satoshi Chikayama
Executive Creative Director, TBWA\HAKUHODO
After handling many Japanese clients as a Commercial Planner, he gained practical international experience at TBWA\CHIAT\DAY, before assuming his current post. He is currently involved in a broad array of activities, including strategic planning for global clients, helping promote understanding of dementia, and production of music videos for the idol girl group AKB48. He was the JAAA Creator of the Year Medalist in 2015. Campaign Asia Pacific named him their 2016 Creative Person of the Year. Most recently, he won Silver for The Restaurant of Mistaken Orders at Cannes Lions International Festival of Creativity 2019.
SHARE
Back to News & Insights