Unimagined Ways are born of a creator’s passion: SOUND HUG

Hakuhodo’s creativity has the power to produce Unimagined Ways. We increasingly encounter challenges that cannot be solved with conventional ideas reached with logical approaches. Hakuhodo breaks through these challenges and creates new value with Unimagined Ways that break with convention. The buds of various such solutions have already emerged and the challenge of opening the way to the future has begun.
In this series of interviews, we ask Hakuhodo Group people who have used creativity to produce and implement Unimagined Ways about the genesis of their breakthrough Way. In the second article in the series, we talk to Copywriter Masatoshi Usami, who was instrumental in implementing SOUND HUG. 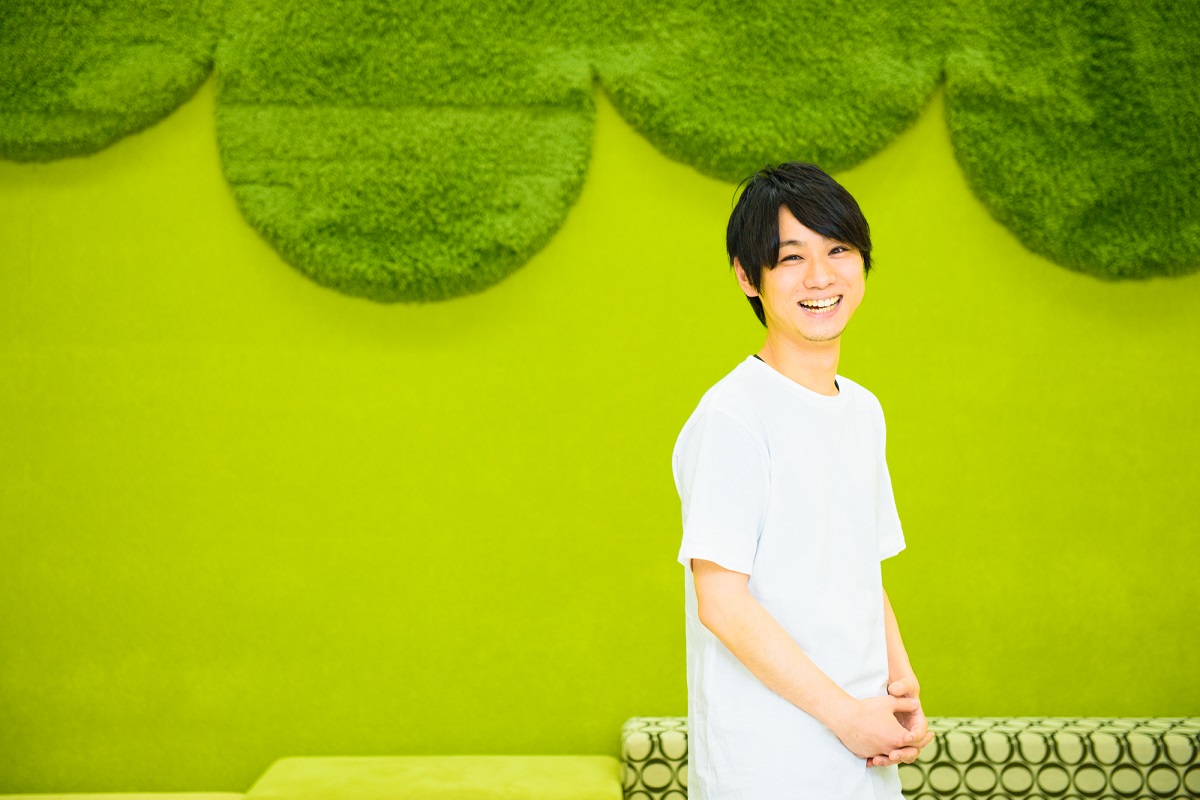 You developed SOUND HUG in collaboration with Yoichi Ochiai (CEO, Pixie Dust Technologies, Inc., media artist and Associate Professor, Tsukuba University). The two of you then paired up with the Japan Philharmonic Orchestra to organize a concert featuring the device, which enables music to be felt with the body. Can you tell us about SOUND HUG*?

SOUND HUG is shaped like a big balloon, and when hugged, it directly transfers the vibrations and rhythm of music to the body. It is also luminated, and changes color depending on the pitch of the music, enabling the enjoyment of music through touch and sight. Besides allowing hard of hearing people to enjoy music, it also enables hearing people to experience music in a new way.

How did you become involved in the development of SOUND HUG?

It goes back to 2017, when I developed LIVE JACKET with Yoichi Ochiai. A jacket embedded with dozens of tiny speakers to enable “wearing” music, we created LIVE JACKET based on the idea that music should be enjoyed with the entire body.

Someone at the Japan Philharmonic Orchestra (JPO) heard about it and contacted me. They were super excited about it, but at that point, all they said was that it would be great if we could do something together. A few days later, I discovered a tweet. 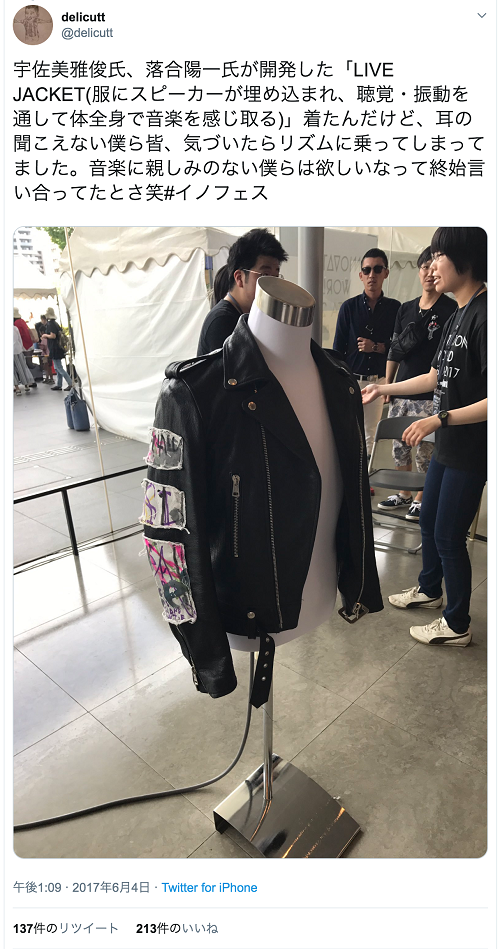 Posted by Kento Nakai, a deaf soccer (soccer for hard of hearing people) player who had experienced LIVE JACKET at an event in Tsukuba, it said: “All of us deaf people found ourselves getting into the rhythm. Unfamiliar with music though we are, from start to finish, we were saying to each other how much we want this thing.”

So, what did you do?

I got in contact with the JPO right away. With LIVE JACKET, I said, it might be possible to have a concert that hard of hearing people could enjoy, too. Yoichi Ochiai, the JPO and I got started on planning a concert. Initially, we wanted to have everyone in the audience wear LIVE JACKET, but the cost was prohibitive, so that wasn’t realistic. We needed a simpler way to give a similar experience, and after much discussion, we came up with SOUND HUG.

A project made possible by social media

The JACKET became a balloon. What a massive change in concept

A balloon has a big surface area and fits closely to the body; it conveys vibration well and hugging it creates a feeling of warmth. And balloons don’t cost much. But if it was too soft, it would be difficult to reproduce vibrations, so we considered making it from a harder material, among other modifications we tried, in the prototyping phase.

In developing SOUND HUG, Yoichi Ochiai was particular that we produce something that would really allow hard of hearing people to enjoy music. So we asked Kento Nagai, who posted that tweet, and a group of hard of hearing students to collaborate with us many times as we refined it. The result is SOUND HUG, which can catch the fluctuations of even small vibrations and convey the rhythm and melody of music.

I, myself, was particular about its strength as a work of art. Not just making it round, I made it a glowing orb and added a design so it changed color depending on the pitch of the sound: blue for low-pitched sounds and red for high. This made it possible to enjoy music with the eyes, too.

Left: During a meeting / Right: A rough sketch from a meeting

The Sound-Free Concert was reported on various news outlets, so hearing people learned about it, too. Sound-Free Concert 2019 will be held by the JPO on August 20 this year and I’m delighted that SOUND HUG is becoming mainstream.

SOUND HUG can of course be enjoyed with intense music, but it is actually especially suited to classical music. Pieces where the vibrations can be felt gently showcase the SOUND HUG all the better.

There was a point where this was really brought home to me. We had hard of hearing people hug SOUND HUG while listening to John Cage’s 4’33” (four minutes 33 seconds of continuous silence). The SOUND HUGs picked up tiny noises in the silence, such as coughs and the rustle of clothing, and glowed and vibrated faintly. Afterwards, one participant reflected: “I thought they would be playing lively music, but it was very quiet music and I thought, ‘That’s music too.’” I was struck with Yoichi Ochiai’s impassioned response: “That’s exactly what John Cage was trying to say!”

Feeling the potential of technology anew

As can be said for SOUND HUG itself, this was a project made possible by advances in digital technology: a single tweet triggered the project, most funds for the concert were raised through crowdfunding, and digital tech was also the reason we were able to start working with the JPO. 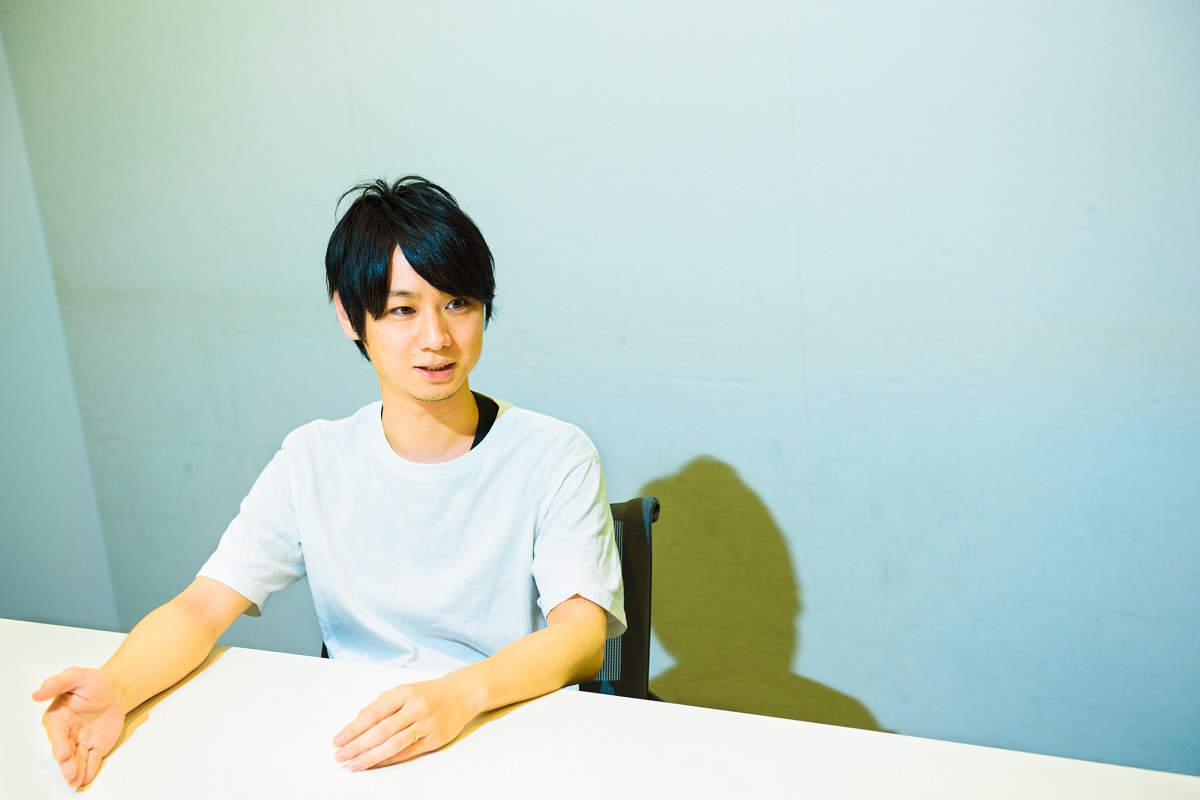 Breaking through a challenge with an Unimagined Way

What was the genesis of the Unimagined Way in SOUND HUG?

You could say that lots of Unimagined Ways were needed to pull this project off, but one especially big turning point was the moment we hit upon SOUND HUG when exploring lower-cost options after we realized producing enough LIVE JACKETs for an entire concert audience was going to be cost prohibitive.

What about this project did you struggle with?

That would be the fact that SOUND HUG is not a hearing instrument but a device for enjoying music in a new way. We wanted to make SOUND HUG something that even hearing people would want to enjoy music with. From the beginning, the JPO were very keen that it be a concert that hard of hearing and hearing people could enjoy together. 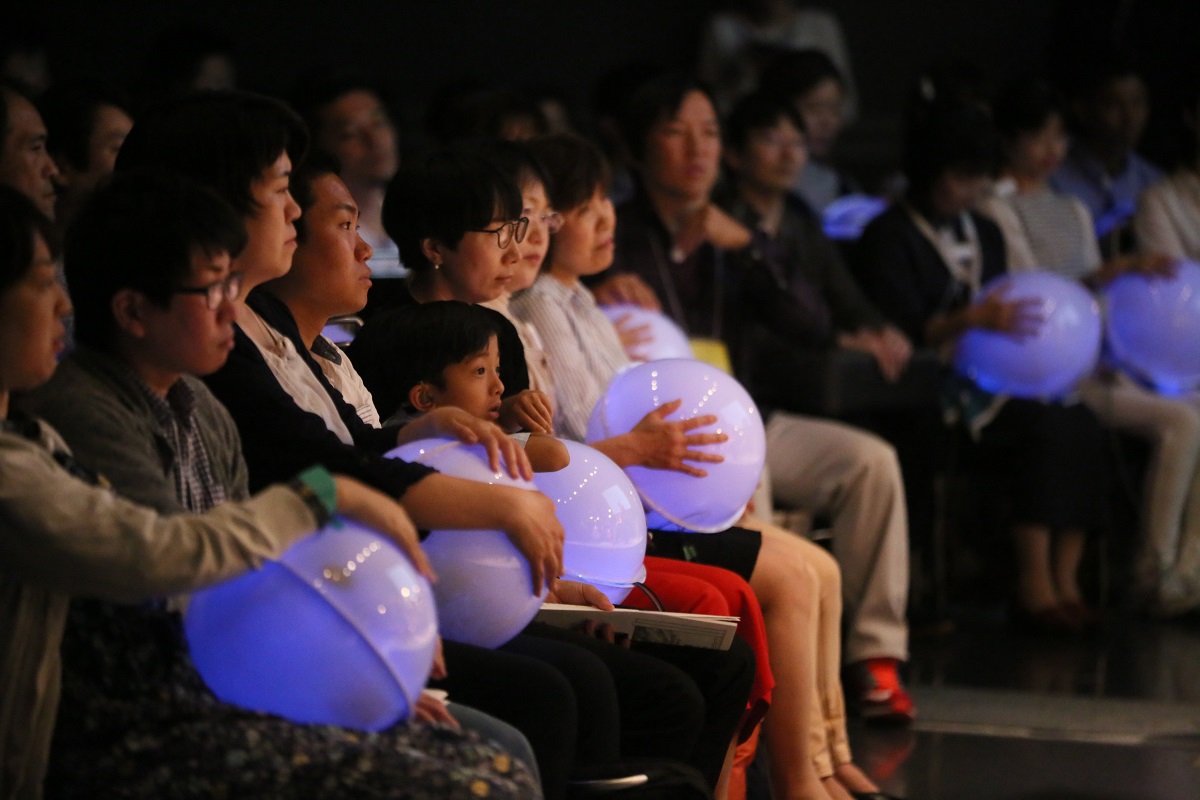 What did the project mean to you?

To me, Hakuhodo’s creativity lies in its ability to carry its ideas through to implementation. I realized the extent and importance of this when developing SOUND HUG. Anyone can come up with an idea. Only professionals can come up with the means to bring the idea to fruition. As a professional myself, I worked on this project thinking how it would be if I used the creativity I’ve honed over the years to give something back to society. As a Hakuhodo person, I drew up the plan, did the account service and the PR, and even came up with the “Sound-Free Concert” title for the concert. I was just ecstatic that this thing that I realized with the JPO and Yoichi Ochiai had such a big impact.

Hakuhodo’s vision is Inventing the Future with Sei-katsu-sha. I had hoped that this project might serve as a showcase for Hakuhodo’s future.

What drove you to go this far?

Passion. Without passion, you can’t bring anything to fruition. All creators want to make something that hasn’t existed before, but trying something new is fraught with worries and difficulties. When you hit these, you won’t be able to generate the energy and strength to push through and reach your goal if you don’t have passion. I think the source of Unimagined Ways is the same. I believe that human passion is an energy that doesn’t fade. This project was tough, too [laughs]. There were challenges from doing everything by myself. I only brought it through to fruition with passion. 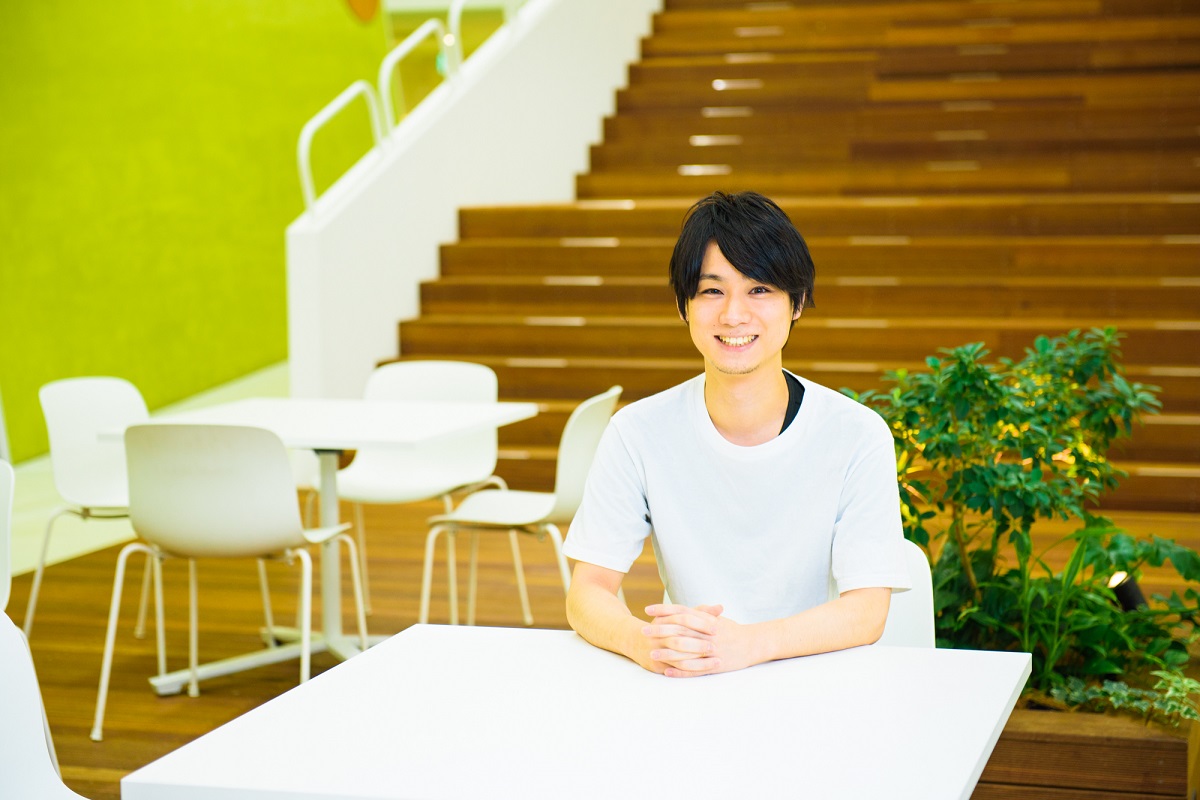 Masatoshi Usami
Copywriter, Disruption Lab, TBWA\HAKUHODO
Masatoshi Usami joined Hakuhodo in 2009. He has been at TBWA\HAKUHODO since 2018. He is involved in a broad array of activities beyond advertising, including exhibiting at Ars Electronica (Austria) and South by Southwest (USA). He has won numerous Japanese and international awards. Most recently, he won Bronze for Sound-Free Concert at Cannes Lions Festival of Creativity.