The truth about working women: Tastes in ice cream

So far in this series we’ve examined the traits of each cluster into which Japanese career women can be classified based on their attitudes to life (see here for the traits of each cluster). Last month we started applying that categorization to an analysis of career women’s tastes. The previous installment examined their tastes in beverages; here we turn to the subject of one food women love: ice cream.

Ice cream is a delicious treat easily available at the nearest convenience store or supermarket, and career women just love it! They enjoy it as a little reward to themselves for their hard work or as a daily snack. Tastes in ice cream vary from person to person, and we’ve found that career women differ in their ice cream purchase habits and preferences depending on which cluster they belong to. Here I will analyze data on retail purchases of ice cream and describe career women’s preferences in ice cream based on the resulting findings.

Who loves ice cream the most?

First, let’s look at purchase rates of ice cream in each cluster for the three-month period June-August 2017. 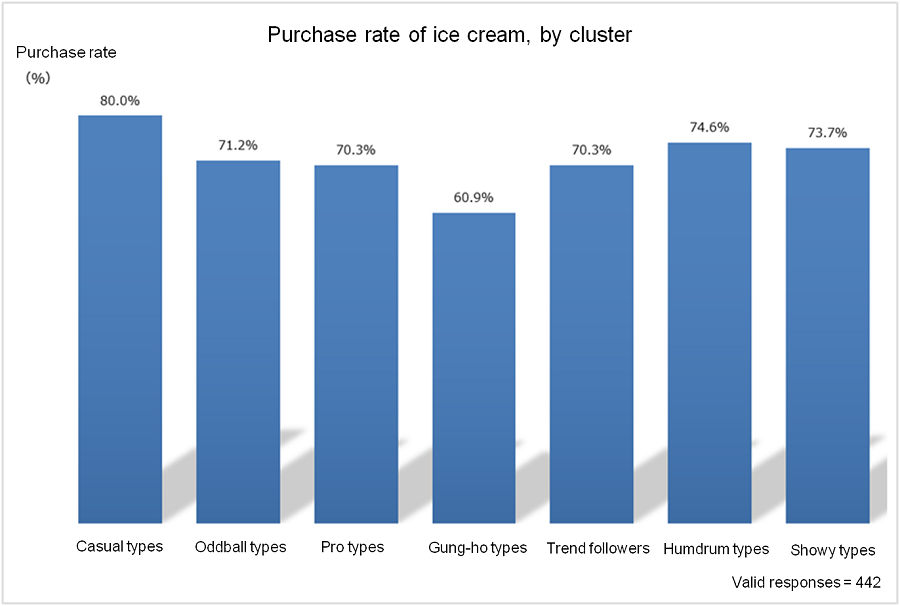 The ice cream-loving casual types vs. the gung-ho types who go easy on the ice cream
Casual types, who value stability and hope to be housewives one day, registered the highest purchase rate. Casual career women hate to splurge, and they apparently recharge their batteries not by forking out a lot of money on a trip or the like but by enjoying the humble pleasure of an ice cream in the comfort of home. Gung-ho types, by contrast, who are go-getters whether it comes to work or romance or social life, had the lowest purchase rate. Women in this category are generally avid shoppers; relatively few buy ice cream, one presumes, because they are so busy with their careers and social life that they seldom have the chance to snack at home.

Expensive or cheap? A lot or a little? 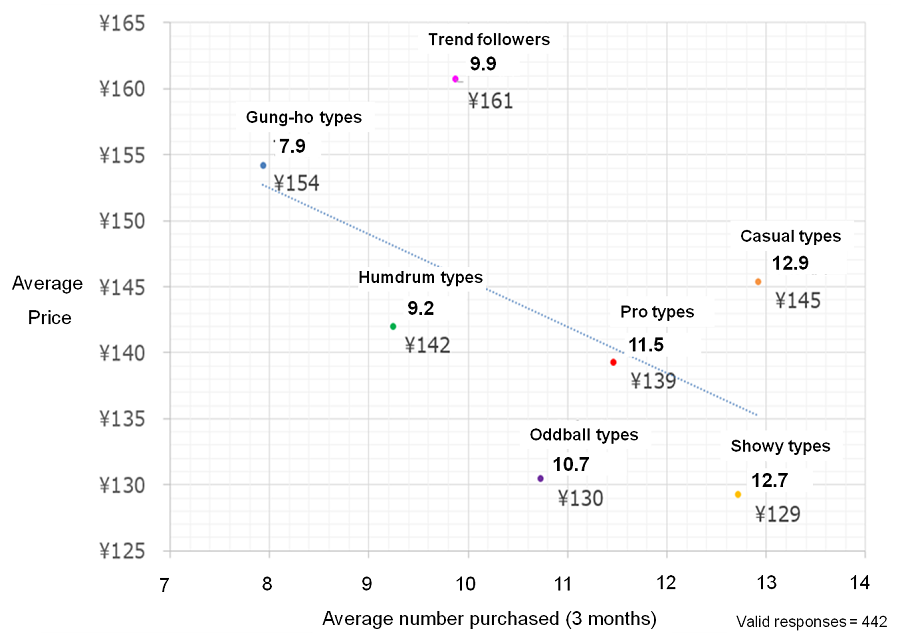 Showy types spend the least per ice cream but also buy a fair amount of it. They eat lots of ice cream on the cheap, which is consistent with the traits of the showy types: having lots of casual friends and wanting to do it all.

The most popular format among career women: Ice cream in a mini cup

Next let’s look at purchase rates of different formats of ice cream among career women. 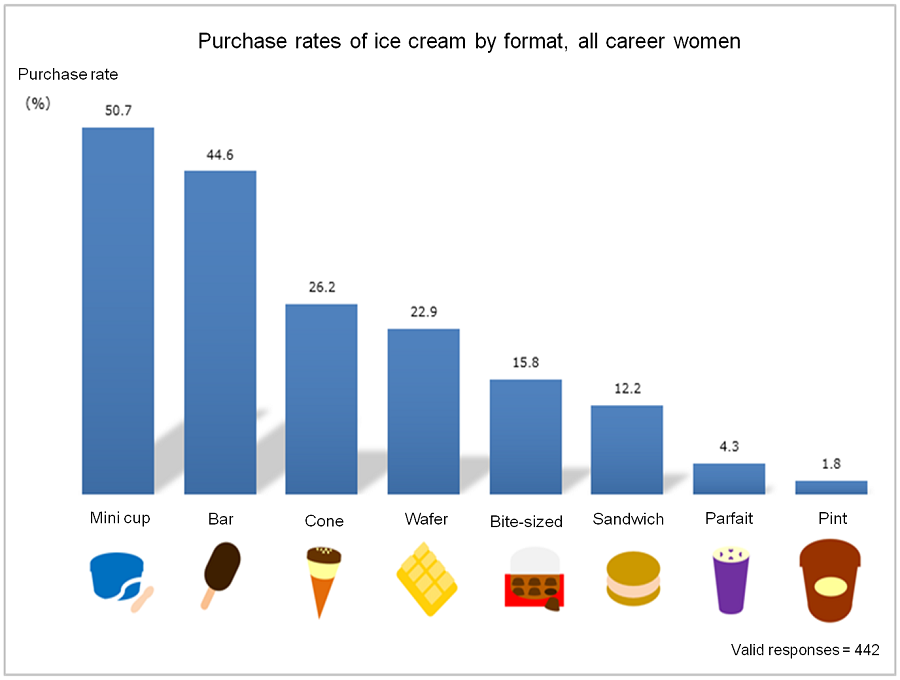 The type of ice cream that career women buy most is the mini cup. This format is a common sight in stores, and its overwhelming popularity is hardly surprising. Ice cream bars place second. These come in many flavors and varieties—vanilla coated in chocolate and popsicles, to name a few—and they’re easy to eat, so it makes sense that women love them. Next come cones and wafers, which are almost in a dead heat. It appears many career women like the combination of ice cream with a crunchy cone or delicious-smelling wafer.

Now we turn to the question of which types of ice cream women in each cluster prefer. First, let’s compare the results for cones and wafers, both popular favorites. 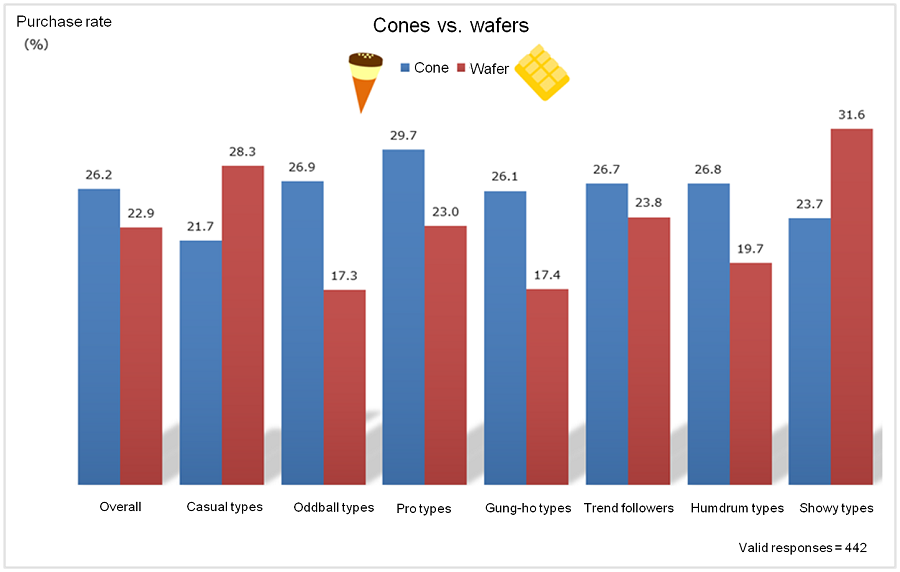 Cones and wafers both have one thing in common—you eat the shell with the ice cream—and they’re almost dead even in the overall rankings, but their relative popularity actually varies considerably from cluster to cluster.

Wafer eaters
The showy types always fishing for likes & the casual types seeking ordinary happiness
While an ice cream cone is nice and filling, ice cream in a wafer—which in Japan means a highly fragrant type of wafer used in traditional confections—has a mellow, very Japanese flavor. The preference for wafers among showy types with their desire for a fulfilling personal life and casual career women with their dreams of becoming a housewife one day may reflect an old-fashioned streak even in their choice of confections. Another thing about ice cream wafers in Japan is that they are often divided into cubes that can easily be snapped off and shared with others. The gregarious showy types doubtless often eat ice cream wafers with a friend.

Next let’s compare the results for bite-sized ice cream snacks, such as ice cream balls, versus ice cream sandwiches, which consist of ice cream between two cookies or another type of biscuit. 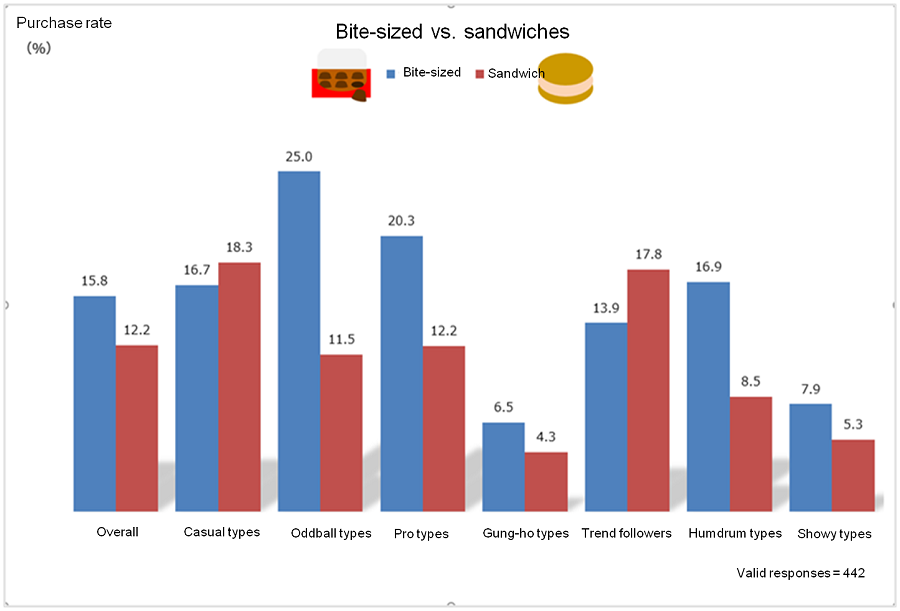 The bite-sized format is slightly more popular overall, but preferences are clearly divided between clusters.

Bite-sized snack eaters
The oddball types who follow their own path in life & the sensible, work-centered professional types
These two clusters exhibit a particularly marked preference for bite-sized ice cream snacks over ice cream sandwiches. Oddball types with their aversion to being tied down and desire to enjoy things on their own terms may like this format of ice cream because they can eat it at their own pace one piece at a time. And the prudent, sensible professional types may like it because they prefer to enjoy ice cream in small portions rather than wolfing it down in one go.

That wraps up our survey of ice cream purchase trends among Japanese career women. Women in Japan generally have a sweet tooth, but isn’t it fascinating that their purchase habits and preferences in ice cream should differ so greatly depending on their attitudes to life and other traits?

Look out for the next column in this series, which will further analyze trends among Japanese career women using actual data on online behaviors like website visit histories. 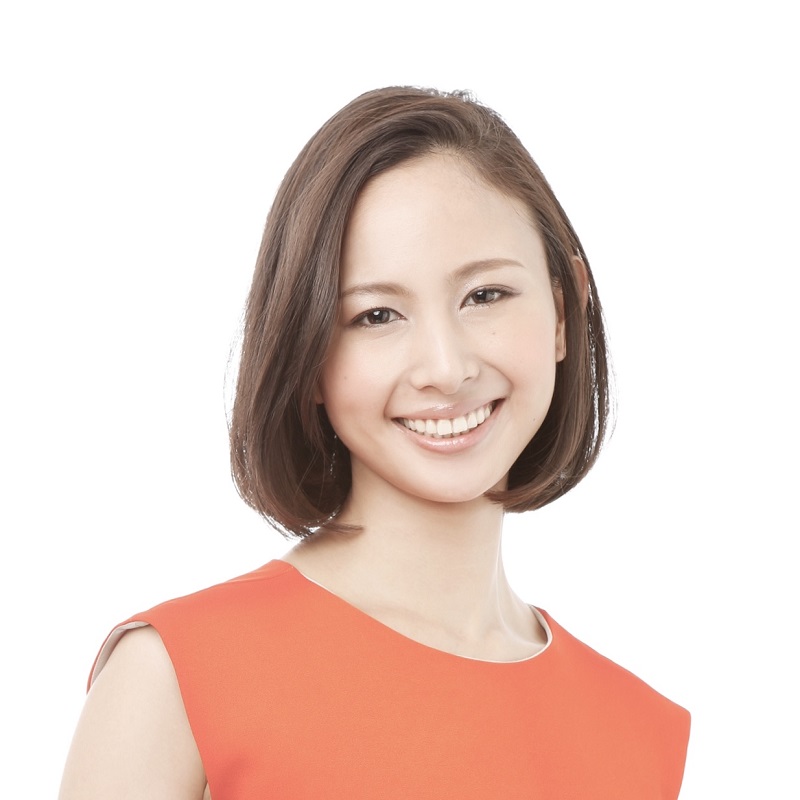 Ayaka Ioki
Researcher, Career Woman Lab
Strategic Planning Supervisor, Planning Division 3
Ayaka Ioki has worked in strategic planning since 2010 after stints in account services and consulting. She handles marketing projects in a wide range of sectors including cosmetics, electronics, automobiles, and foods. Besides working on domestic Japanese operations she also has global experience, including a spell in Singapore. She loves travelling, photography, and visiting art museums. Her favorite dish is Japanese-style pork cutlet.

• Survey Outline
QPR survey by Macromill, Inc.
Period analyzed, ice cream category: June-August 2017
Working women aged 20-49 without children were extracted from a nationwide panel of 30,000 and classified into 7 clusters defined by the Career Woman Lab.
NOTE: Purchase rate represents the percentage of valid survey respondents in each cell who made purchases.