The truth about working women: Love and marriage

Marrying up is now the stuff of fairy tales

Hello from the Career Woman Lab.

The topic of this installment is love and marriage—a very human subject of enduring interest. Back in the days of Japan’s economic bubble, in the late 1980s, a voguish term for the qualities women sought in a prospective marriage partner was the “three highs”: tall, highly educated, and highly paid. It was an era when the entire country was on the up and up, and women sought a better life and wanted to flaunt their prosperity. In a similar vein, they talked of “marrying into wealth” or finding a “knight in shining armor.” They were looking for a man of superior status to raise them to greater affluence.

How times have changed. Now what Japanese women seek in a prospective husband is the “three averages”: average income, average looks, and an average personality. Some even talk of the “four lows”: lowly, low dependence, low risk, and low fuel consumption. They want a guy who won’t boss them around or expect them to do the housework, has a steady income, and knows how to scrimp and save. Such is the world we live in.

Older readers among you may be thinking, “Young Japanese these days have no dreams.” But more and more Japanese women are working today just like men and sometimes make the same money. Conversely, just because you’re a man, that doesn’t mean you get paid more. Omiai marriages—in which the couple are introduced to each other by a matchmaker—have become less common, and typically women now marry a boyfriend from their own social circle. They therefore have no illusions that their lives will be miraculously transformed for the better by a marriage partner they haven’t found yet. They don’t stake their hopes on someone else; they’re realists. They don’t think of romance and marriage separately; they regard marriage as an extension of romance. Instead of wandering aimlessly in search of some fat cat who may not even share their values, they are happy to be able to tie the knot with the boyfriend they already have, their soul mate. What they seek is not a knight in shining armor but a partner with whom to live in security. And the younger women are, the more pronounced that tendency.

You might expect that marriage is still some way off for women in their twenties, and women in their thirties are the ones who are eager to get married straight away and wed their present boyfriends. But that’s not the case. As the data shows, twenty-somethings are more pragmatic: they want to tie the knot with their present boyfriend. One factor behind that may be that women in their twenties are realists. They belong to the Drone Generation and the Wharf Generation, as described in a previous column, The truth about working women: Theory of the Generations. 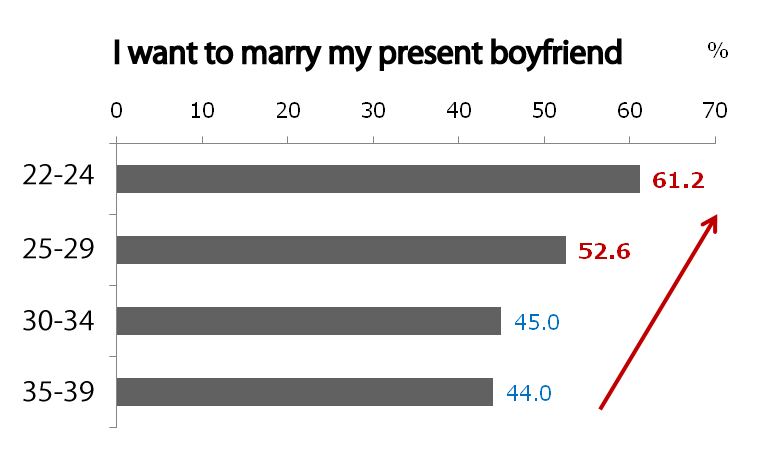 A hot topic in Japanese magazines around 2006 was how working women should dress to please men and cultivate their feminine charms, all with the goal of attracting eligible bachelors. But many Japanese men today are what are described as herbivores: they don’t go out hunting for women. Besides, there are not that many men with high incomes out there to begin with. Women have therefore come to realize that however attractively they might dress, they’re not going to find that rich guy to marry they’ve dreamed of. Hence such fashions have fallen by the wayside.

Fashion trends are constantly changing. Over the past several years the casual look has been in vogue. In place of clothes that emphasize your femininity like skirts and high heels, casual fashion items that make it easier for guys to identify with you like sneakers and rucksacks have become the norm. The same can be said of the interests women pursue and even their personalities. Guys find it easier to talk to you and discover things in common with you if, instead of stressing solely your feminine qualities, you display a masculine, nerdy side: if you occasionally drop by a fast food place on your own for a beef bowl, say, or are into trains or cameras.

And on social media, the more people identify with you, the more likes you’ll get. A woman with whom everyone can empathize most appeals to the men around her and can look forward to economic security. Women today aspire to be likable, to be popular with the crowd, rather than to attract a specific guy. That tendency is especially marked among social-media-savvy twenty-somethings. 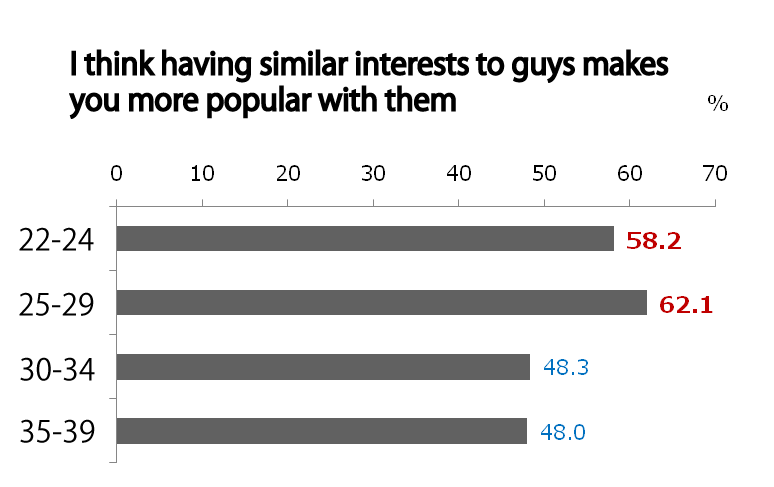 Group dating is a big thing in Japan. Working women and men meet up for drinks night after night in search of romance. But lately the quest for a future partner has undergone a change.

Today more and more people are meeting on social media. Dating apps and matchmaking apps, which help people hook up by matching them up with someone of the opposite sex via social media, are rapidly catching on, especially among twenty-somethings. Female users of these apps say they’re more efficient than group dating, which they dismiss as a waste of time.

A group date typically begins with the participants telling each other about their affiliations and credentials: where they work, what university they graduated from. But with a matchmaking app, the first thing you get is a glimpse of the person’s daily routine as opposed to their professional self. By searching the person on Facebook or Instagram, you can find out about their lifestyle before even meeting them. What kind of life do they lead? What things are they into? Who are their friends? Thus you can pretty well determine whether you’re likely to hit it off.

What’s more, a group date takes two or three hours but only lets you meet three or four members of the opposite sex, but with a matchmaking app you can flip through dozens of photos of prospective partners in minutes. That saves a lot of time in your search for that special someone.

Women don’t of course wish to cut short the romantic experience itself. They still yearn for thrilling moments and flutters of excitement as in a romantic drama. But they do want to streamline the preliminary step of finding a mate. After all, digital tools are now available to do just that.

Weddings too are changing in a very contemporary way. In the old days in Japan the parents would make all the wedding decisions, but today the bride and bridegroom decide what kind of wedding they want themselves. And instead of leaving it up to the hotel or wedding hall to make all the arrangements, many couples plan their own personalized ceremony or party.

What is the reason they want their own personalized occasion? It appears to be a desire to express their gratitude to family and friends, and an urge show off the event on social media by making it eminently photographable.

The more you insist on being original, the more effort it will require to plan and arrange your wedding. You need to assume leadership in coming up with ideas, making arrangements with everyone, and finalizing the schedule and budget in preparation for the big day. But today’s career woman isn’t daunted. She knows how to get things done, as she does every day at work. Think of your wedding as just another job and everything will go fine. The bride and bridegroom work together as project leaders.

That then is the state of love and marriage in contemporary Japan. What with the increase in working women and the advent of a new tool, social media, things have been steadily changing. I hope you find some useful pointers here both for your advertising and marketing efforts and for your own love life. 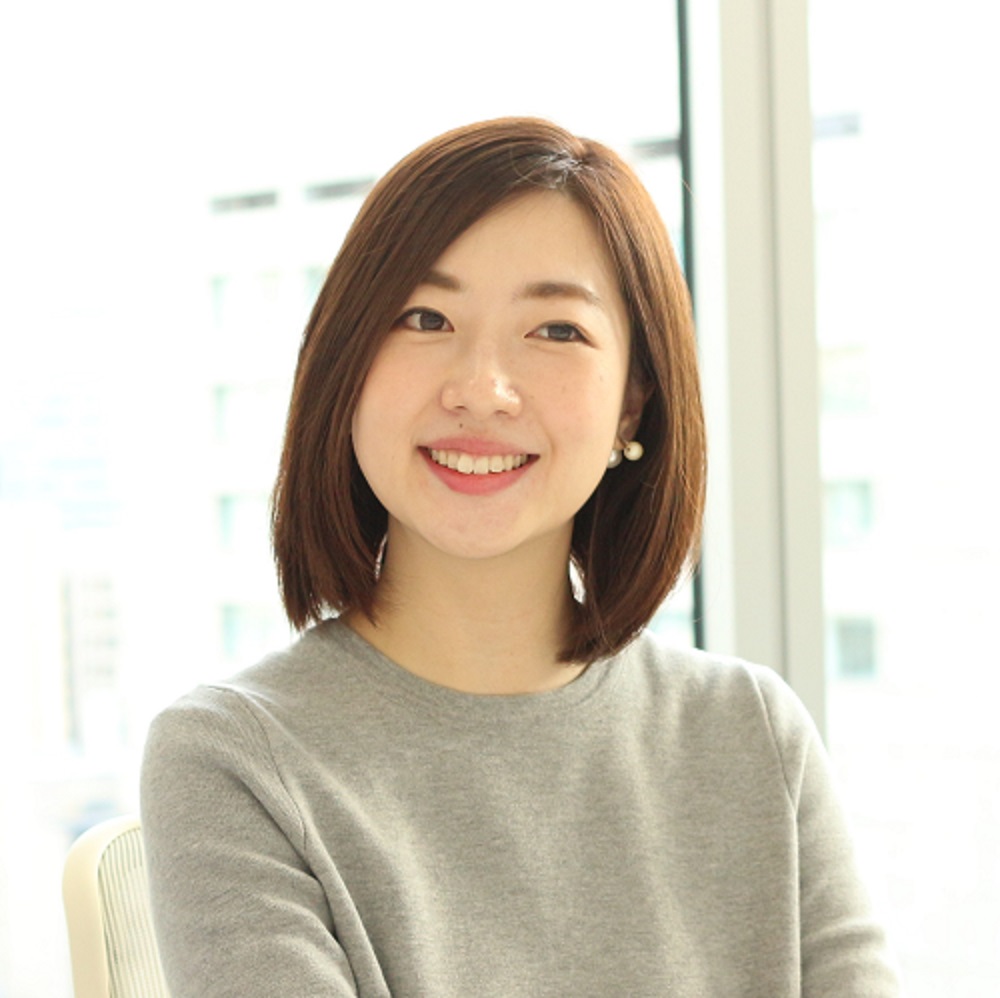 Chisato Takigawa
Researcher, Career Woman Lab
Magazine Division, Hakuhodo DY Media Partners
Chisato Takigawa spent eight years in marketing after joining Hakuhodo in 2005. She is now with the Magazine Division of Hakuhodo DY Media Partners, and is also a member of the Career Woman Lab. Her favorite subject is Japanese history and her favorite food is Japanese pickles. She is an entertainment news junkie.