The truth about working women: Career women and social media

Hello from the Career Woman Lab.

The rainy season is finally over, and quite a few of you are doubtless surreptitiously making plans for the coming summer vacation as you sweat in the sweltering sun.

In this column we look at the subject of social media, now an indispensable part of modern life. We examine new ways of using social media that have emerged among career women. Our particular focus will be on Instagram, an especially popular social media platform with women in their twenties and thirties. Widely talked about in the media, it’s caught our attention here at the Career Woman Lab as well.

What then is happening on Instagram that has earned it such media attention? Zeroing in on the twenties age group, we analyzed survey data on twenty-something career women who use Instagram (admittedly a rather wordy designation).

• Vying for the most photogenic shot 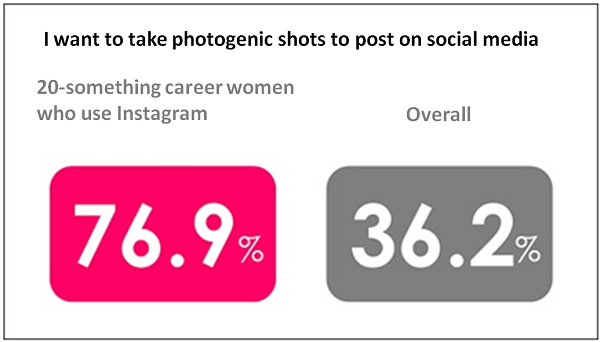 About four-fifths of twenty-something career women who use Instagram say they want to take photogenic shots. This quest for the most photogenic picture has spawned a whole slew of new trends and products.

One trend the Career Woman Lab has identified through its research on Instagram, for example, is a penchant for buying vividly colorful items. Most items considered photogenic, we noticed, typically feature vivid colors.

Like these gaudy sunglasses or huge donut- and Pegasus-shaped swim rings, which make cool props when you’re taking a photo on the beach or at the pool in summer.

Or cute, colorful cakes or popsicles like these, which you can’t help wanting to take a shot of yourself with.

Actual interviews with twenty-something career women who use Instagram reveal that the whole point of purchasing vividly colorful items is to get people’s attention. Social media is overflowing with images, but if the hues in yours are bright enough, you can still catch people’s eye. Thus the reason for this preference for richly colored items is that while they may earn you a few digs—“A bit too big!” “Gaudy! (LOL)”—they look great in a photo, so you can expect lots of likes.

Another big trend these days is the chic picnic (it even has its own hashtag), where everything—the paper plates and cups, even the food—is carefully selected for its photogenic appearance.

• A desire to show they have a real life?

A tendency to buy vividly colorful items isn’t all that has emerged from this trend toward “photogenic consumption.”

Among the trends that the Career Woman Lab has focused on since last year, for example, is a penchant for shopping for things that suggests you have a real, fulfilling life. According to our interviews, these days people who lead a regular daily life and properly enjoy it are considered to have a meaningful existence offline.

One form of photogenic consumption relevant in this regard is reflected in the photos of homemade dishes now popular on Instagram, typically hashtagged #ouchigohan (home cooking). Not only does the food itself look colorful and mouthwatering, but even the dishes and placemats and cutlery featured are painstakingly chosen. Seasonal ingredients may be used to celebrate the flavors of the season.

Many of these images aren’t merely attempts to catch the eye by being colorful and flashy; they reflect a definite worldview, looking like something straight out of a food magazine.

This trend has led to a vogue for designer crockery and natural-looking cutting boards. As for ingredients, making traditional Japanese cooking stock has recently come back into fashion among young women. More and more women these days start their meal preparations by preparing their own stock.

Thus it’s lately become trendy to take photos that don’t just look great, but also give the impression that you have a real life enjoying the cooking and housework.

The reason behind the photogenic boom

What has led to this photogenic consumption? Let’s examine what significance photos have for Japanese career women today.

• Photos: a barometer of taste?

Here’s another interesting piece of data.

Even respondents other than twenty-something career women who use Instagram largely agree that you can gauge a person’s tastes from the photos they take.

With so many image processing and editing apps available for smartphones these days, it’s easy with a bit of ingenuity to take really nice looking photos. Even if you’re shooting exactly the same thing, you can, depending on how you edit the photo, infuse it with the ambience and mood you choose.

The spread of Instagram and other photo- and video-based services on social media has made it common to keep track of the daily doings of friends, workplace colleagues, and even total strangers not just through what they write but through the photos and videos they take. Photos encapsulate how each person prefers to see the world and are perhaps viewed as a window into their individual tastes.

And here’s a further bit of data. 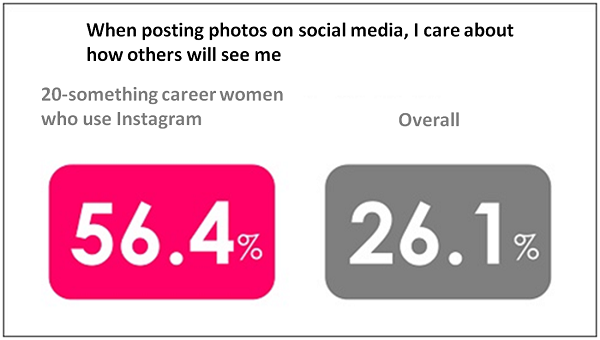 Half of twenty-something career women who use Instagram are conscious of how others will see them when posting photos.

The spread of Instagram has made it the norm to keep track of your friends’ daily lives in photos. You can actually observe with your own eyes what each friend is up to all the time, so much so that you feel you’re constantly seeing each other even though you haven’t met in a while. A person’s photos have become an information source that reveals what they’re usually doing and what their tastes are. One could even go so far as to argue that the photos you post on Instagram and other social media sites are among the criteria people use to determine what kind of person you are.

The reason that people tend to be so conscious of how others will see them when posting photos online and therefore engage in self-branding, I suggest, is that they’re going to be judged on them. And that may be why photogenic consumption, which lets you portray yourself more as the person you envision yourself to be, has really taken off. 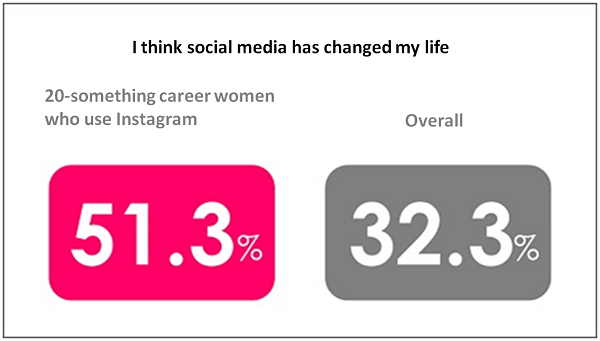 Half of twenty-something career women who use Instagram say that social media has changed their lives (!!). Instagram has become a barometer of taste and a self-branding tool they use because they’re concerned how others see them.

In pursuing their preferred worldview or engaging in self-branding, how do these women decide what to do on their days off or what to buy when shopping for clothes or makeup? One of the benchmarks they rely on, I imagine, is whether each choice is conducive to achieving their worldview and being true to themselves.

Social media may change their lives in that, in a sense, it gives them the opportunity to take a second look at their lives and themselves and consider what it is they really like and who they really are.

I rest my case.

Social media is all the rage with twenty-something career women these days. But whether you’re a career woman or not, why not hit the town in quest of photogenic things to shoot? After all, summertime is high season for photogenic fun. 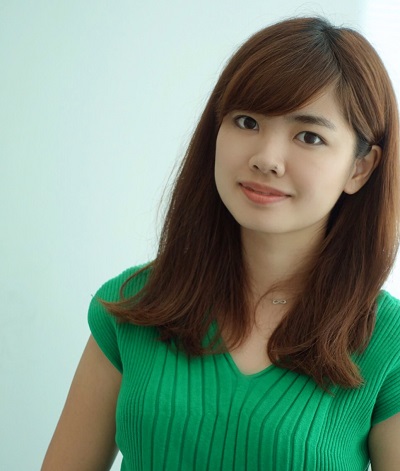 Tomoka Takada
Researcher, Career Woman Lab
Strategic Planner, Planning Division 2
Tomoka Takada joined Hakuhodo in 2013 and, after four years in account services, became a strategic planner in 2016. She works on a wide range of domestic and international accounts ranging from durables like automobiles and consumer electronics to consumables like cosmetics and foods. She is a big fan of Bollywood movies.