The truth about working women: Theory of the Generations

Directed by female professionals from Hakuhodo and Hakuhodo DY Media Partners, the Hakuhodo Career Woman Lab studies and researches working women in their 20s and 30s. The Real Truth about Working Women is a serial publication the Lab puts out presenting findings about working women’s attitudes toward life and activities from a large-scale kyari-jo [career women] survey conducted in February 2017.

How was your Golden Week? It’s amazing how fast time passes and that we’re already on the verge of summer.

Our last column looked at how dated the word OL has become and explored how today’s women calculate backward from their goals and then work strategically for their future and for themselves. This column, taking a completely different tack, could be titled: “Hold on! Not all working women are like that.” It might seem at first that these two positions are contradictory. But let’s see what’s really going on.

The Career Woman Lab surveyed working women in their 20s and 30s and sifted through generational differences in views on life, views on work, and views on lifestyles. In doing so, we found the generations differ to a surprising degree. Some differences are inevitable, of course, given that they grew up in different social landscapes. But the data revealed the presence of these differences, which led to the findings presented in the previous column.

Let’s dive into the distinctions of each kyari-jo generation.

(1) The Drone Generation: Early 20s calculating their lives for the future

Women in this generation act with awareness of what they should be doing now to achieve an envisioned future for themselves. They are not angling to be full-fledged career women, but neither do they want to become homemakers. Because they value work and private life equally as “part of living,” they try to strategically pick the best of both so they can enjoy themselves as much as possible. We have dubbed these women the Drone Generation, in the sense that they take a bird’s-eye view to decisions about the actions they take. As exemplified by the high response rates to “I want money for raising children” (63 percent) as a reason for working, and “It’s better to have children when you are young and then return to the workforce” (70 percent), these women, while observing women older than them, are taking steps now to realize the vision of the future they want. 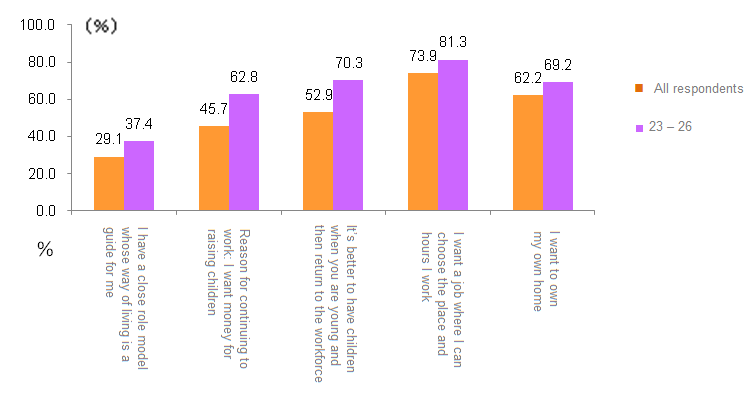 But this discovery begs the question: Where did the Drone Generation’s strategic nature come from? The answer is unquestionably social media. For as long as these women can remember, communicating all the time via social media with people and communities has been perfectly natural. Social media is both a self-branding tool and an efficient means of gathering information that suits your preferences. It’s thanks to their social media proficiency that this generation has a clear vision of the future they want. And it allows them to progress toward this future strategically, while avoiding being swallowed up by the harsher aspects of information. 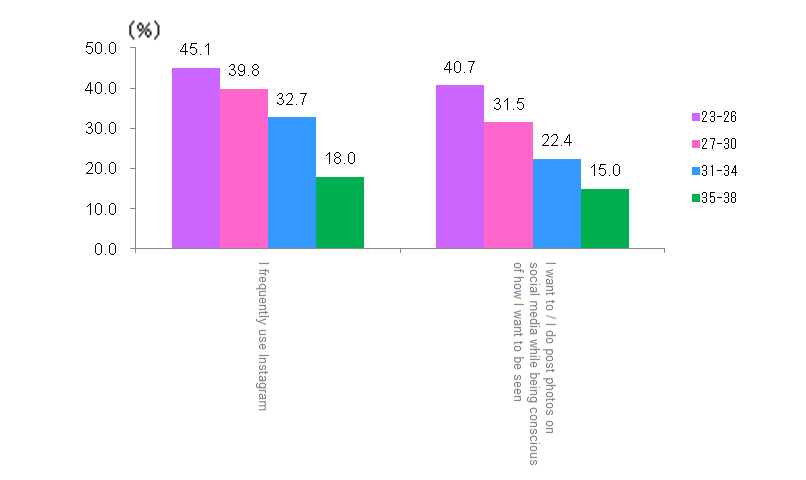 (2) The Wharf Generation: Late 20s wanting a taste of adventure but only from a safe place

The late-20s generation realizes how beautiful the ocean is, but they are content with just looking at it from land. They’re curious, but they don’t want to stray from their comfort zone. These women work because they want money to use on their interests, and, more than the other generations, they tend to enjoy things in the moment. At the Career Woman Lab, we have dubbed this cohort the Wharf Generation, in the sense that they pick up knowledge along the wharf from passing ships without venturing out into the unseen waters themselves. 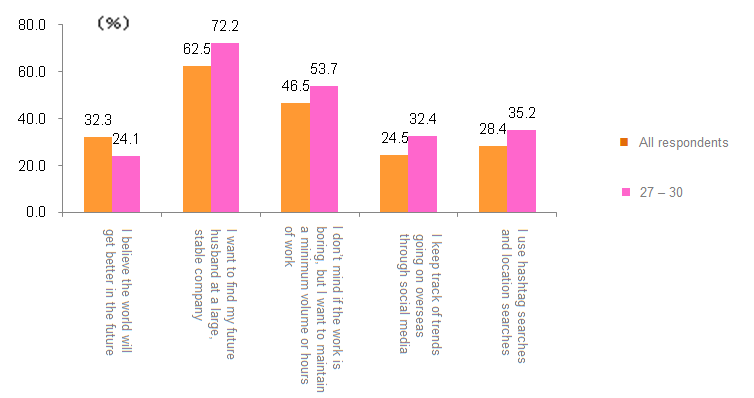 The data show this generation, which suffered through the last recession, has rather low expectations for the future. Nearly 10 percent fewer women in this generation than the overall average agreed with the statement “I believe the world will get better in the future.” There is also a compelling sense this cohort fears going hungry, indicated by the support for “I want to find my future husband at a large, stable company” (72 percent) and “I don’t mind if the work is boring, but I want to maintain a minimum volume or hours of work” (53 percent). This suggests these women place a lot of importance on a stable and secure lifestyle.

On the other hand, the Wharf Generation consists of quite active social media users. One distinct pattern is how many of them use location and hashtag searches on social media. And what’s especially interesting is the 10 percent gap with the overall average in their response rate to “I keep track of trends going on overseas through social media” (32 percent), which was the highest of the four generations. This behavior, in a way, typifies the late-20s generation who restlessly seek out fun things to do within known and safe confines, without embarking on any genuine adventures.

(3) The Yacht Generation: Early 30s wanting to acquire all manner of skills

The early-30s generation has a keen sense that unexpected events could befall the world at any time. This unease leads them to choose paths that fit current conditions, however short-lived. Much of this insecurity is informed by their early childhood, when a string of misfortunes struck Japan: the collapse of the bubble economy, the sarin gas attack on the Tokyo subway, the Great Hanshin-Awaji Earthquake, a succession of murders of children …. This was also the first generation educated under a new regime that stressed individuality, even as traces of the old memorization-based education system lingered. At the Career Woman Lab, we have dubbed these women the Yacht Generation, in the sense that they read the way the wind is blowing and reorient themselves to take advantage of its push.

The early-30s generation is distinctive for having the highest work motivation of the four groups. In this generation, you find many women applying their intrinsic skills and abilities to their jobs, as indicated by the response rates for “I have close friends or acquaintances who have started their own businesses” (47 percent) and “I want a job with overseas ties or a job where I can be active globally” (42 percent).

Noting their devotion to work, we wondered what they spend their money on. We found, in the data concerning money matters, higher-than-average scores for expensive and luxury items — “I want to wear high-quality / high-priced clothes and accessories at work” (51 percent) and “I want to spend money on jewelry, watches, and other personal luxury items” (41 percent) — as opposed to a somewhat lower-than-average score on “I want to spend money on my interests” (66 percent). Naturally age has a more-than-zero impact on the choices of the Yacht Generation, but we can surmise that their attraction to visible, tangible goods is a consequence of having lived through an age of insecurity in early life. It’s very intriguing that differences in generations of working women lead to differences in consumption.

(4) The Motorboat Generation: Late 30s galvanized by their knowledge of tough times

The late-30s generation speeds directly toward its target with single-minded determination and with nary a sideways glance. They strive diligently and with all their might to do their personal best and achieve the goals they’ve set for themselves. The impetus behind this drive is that these women were educated in a memorization-based system, in which the greater the effort you put in, the better the grades you received. We have dubbed the late-30s generation the Motorboat Generation, in the sense that their accumulated personal growth acts like an engine, propelling them straight to their destination. 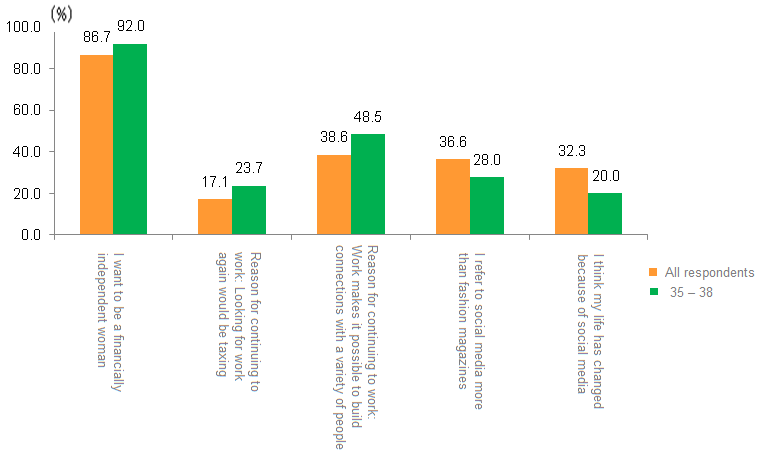 The data suggest an ambition to be independent in their career and work, as more of this generation reaches managerial age and the impact of a tough job market. This is evidenced by an over 90 percent support rate to “I want to be a financially independent woman” and the 24 percent who selected “Looking for work again would be taxing” as a reason for continuing to work.

And on a different plane, the personal connections formed at work also fuel the Motorboat Generation’s desire to work. They, moreover, tend to prize real things, with social media having little influence on their lives. For example, this cohort scored about 10 percentage points lower than the overall average on “I refer to social media more than fashion magazines” (28 percent) and “I think my life has changed because of social media” (20 percent). It appears, then, that they prefer to non-digital information, despite being mobile natives raised on pagers and PHS handsets.

I hope this column has given you a sense of the different tendencies among different generations of working women. Significant generational gaps can be seen even among working women. Therefore, I think we can safely say the time when you could lump all working women together with a word like OL or career women is over. What I wonder about is what kind of working women will today’s elementary and middle-school girls become when they start entering the workforce.

Look out for our next installment, as we probe deeper into the real generational conditions at a roundtable discussion. 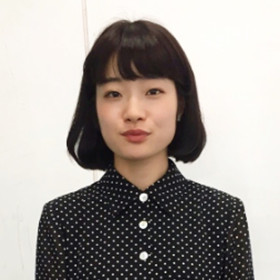 Izumi Tozawa
Researcher, Career Woman Lab
Strategic Planning Researcher, Planning Division 1
Ms. Tozawa joined Hakuhodo in 2016 and has been an active member of the Career Woman Lab since last year. She is currently engaged in research and planning operations primarily for cosmetics and other consumer goods for women. She makes an excellent pho and lately cannot get enough pumpkin pudding.