The future of money 2: The birth of sei-katsu-sha currencies

Here we share our ideas on four sei-katsu-sha currency types that may emerge in the future.

1.The Currency of self-reliance

Glimmers of the future
The same survey respondents were asked two-choice questions about how they see themselves now and how they see themselves a decade hence. Some 60 percent answered that what they rely on for a living at present is money, but roughly half answered that what they will rely on for a living a decade hence will be something else. 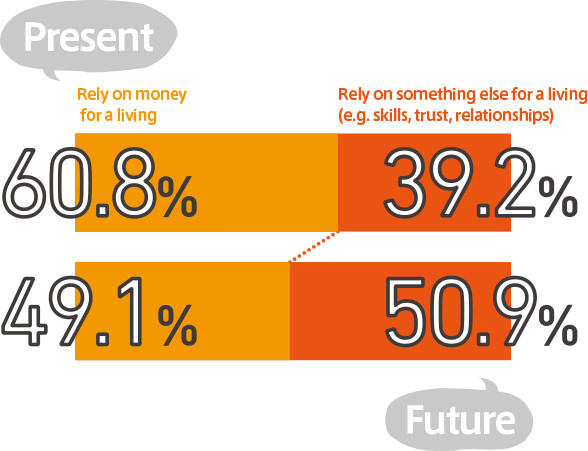 It seems, then, that increasingly people will come to consider non-monetary assets such as skills, trust, and personal relationships to be more valuable than money. 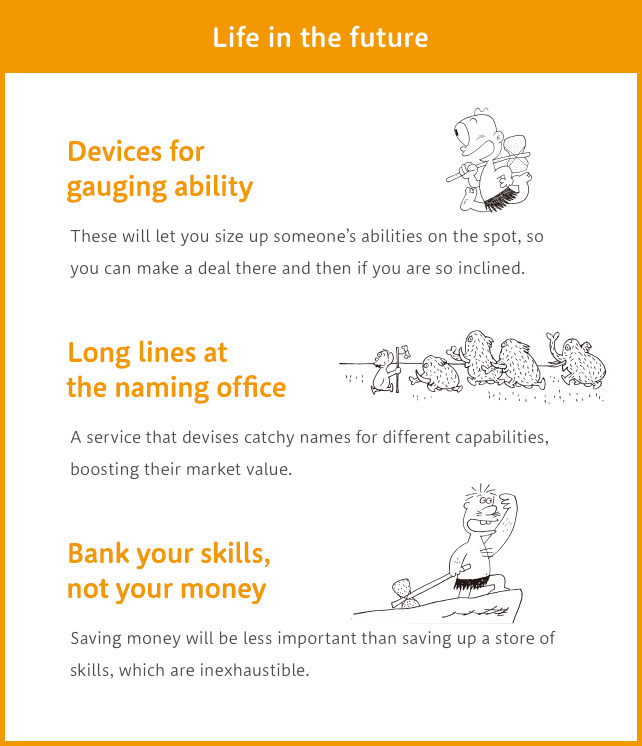 The currency of self-reliance: Tradable trust and skills
• If your trust or skills are in demand, you will be able to offer them in exchange for what you want.

• People’s trust and skills will be quantified and publicly traded on various platforms.

2.The currency of sponsorship

Glimmers of the future
Some 60 percent of respondents say they currently want to spend money on themselves, but almost half say they will want to spend it on someone else a decade hence. 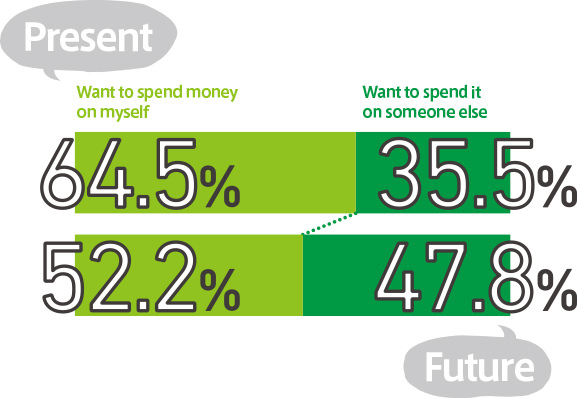 It seems, then, that people will come to find greater meaning in entrusting their money to someone else to make use of than in spending it themselves.

The currency of sponsorship:
Money entrusted to another for something you can’t do yourself
• Systems for matching sponsors and recipients on the cloud will become more sophisticated.
• You will be able keep track of how your money is spent in real time and enjoy the experience vicariously. 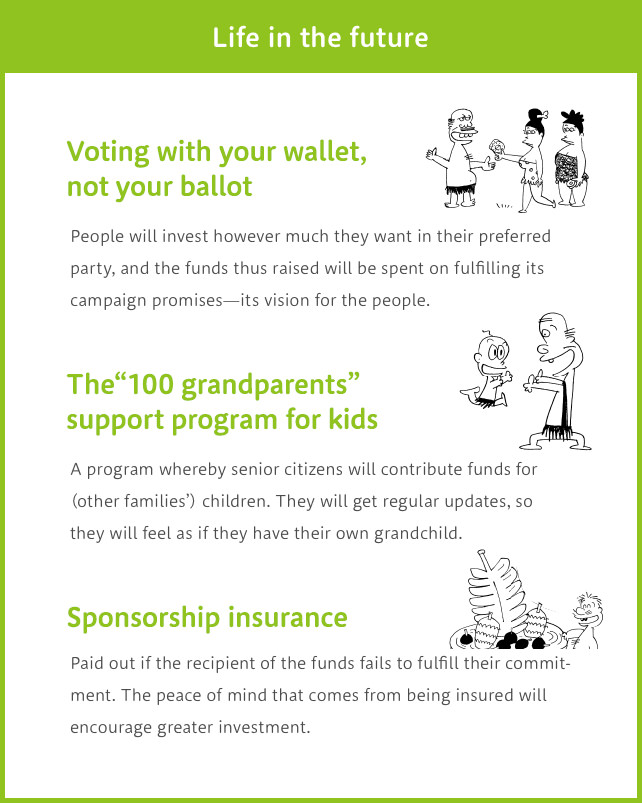 3.The currency of fun

Glimmers of the future
Some 60 percent of respondents currently enjoy just the goods or services they acquire in exchange for money, but ten years from now 40 percent say they will also enjoy the process of exchange itself, up from 30 percent today. 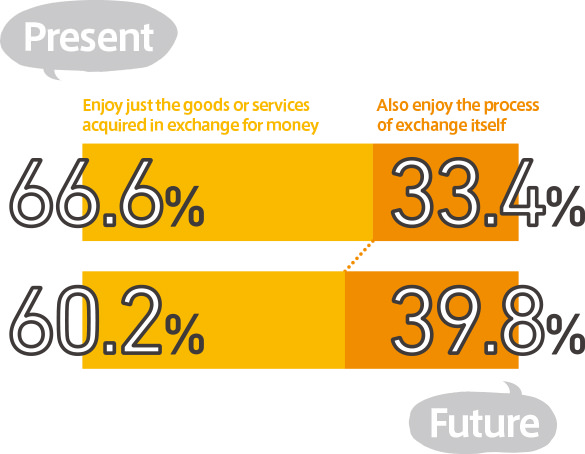 Money originated as a medium to exchange for whatever you wanted, but in the future some people will likely use it to enjoy the process of exchange itself.

The currency of fun:
For enjoying the process of exchange itself rather than for buying things

• Have fun decorating the money you send or attaching a message to it.
• Transferring money to someone will be like a game or a way to express your feelings. 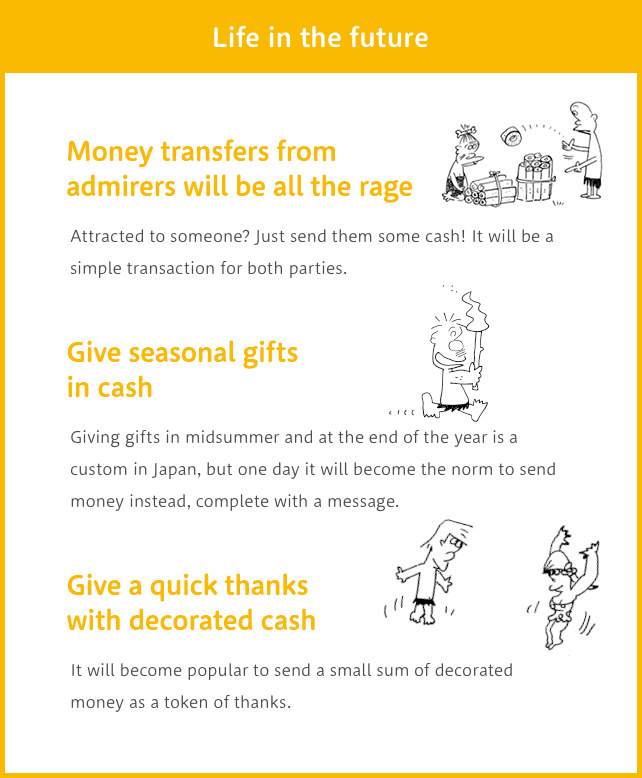 4. The currency of solidarity 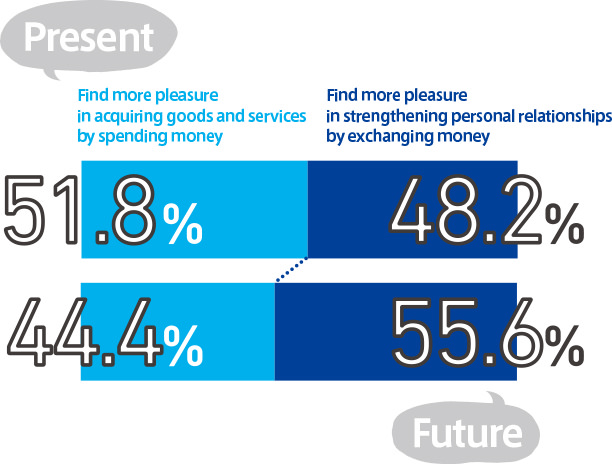 One day, it seems, many people will be attracted by the qualities that distinguish a particular type of currency and form bonds with others who possess it.

The currency of solidarity:
Money that brings you closer to others when you own or spend it

• Currencies that circulate in specific communities among people with shared values.
• Each will have its own unique rules and design so that users identify more strongly with it. 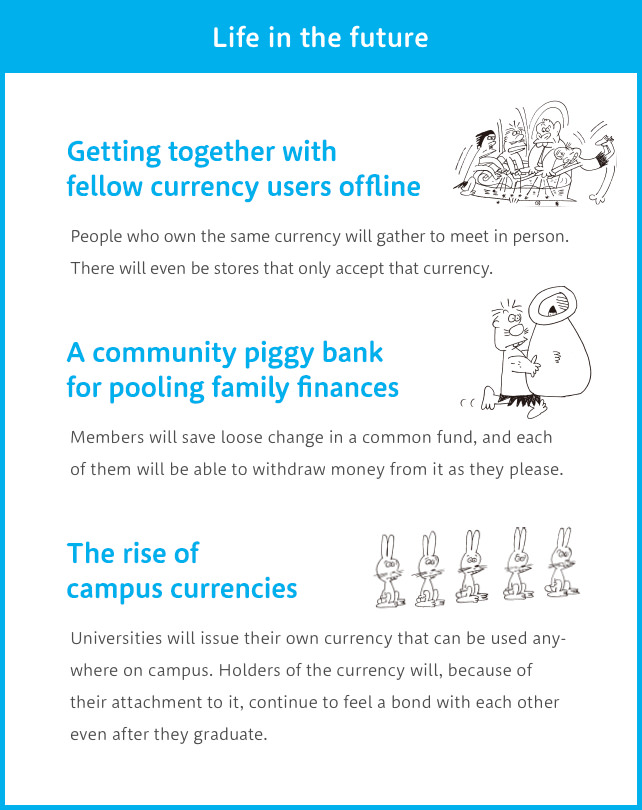 Here are several existing examples of currency innovations that hint at what the future holds.

Case study: Timebank
Timebank is an app that allows people to buy and sell time in ten-second units. You can ask someone for business advice or a dinner date for the length of time you’ve purchased. The cost per time unit varies depending on the seller’s skills and trustworthiness, and it fluctuates. Instead of using the time you’ve bought, you can save it up and sell it to someone else; thus people’s time circulates on the market.

Case study: Mr. Polca
Mr. Polca, as he calls himself, has to date made more than a hundred cash transfers to young people using the peer-to-peer crowdfunding app Polca. “I want them to do things on my behalf I couldn’t when I was young,” he says. “The nice thing is that there’s a lasting relationship between the sender and the recipient, since a record of the transfer remains. Money is money, but when it’s linked to someone, the person you hand it over to will feel more responsible for how they spend it. So they should make good use of my money.”

Case study: Swedish monetary one-upmanship
The Swedish cash transfer app Swish lets you send money peer to peer for free. Now a kind of game has arisen using this app. When User A sends one krona to User B, User B sends five krona back, then User A sends a further ten krona, and so forth. This Swish one-upmanship, as it might be called, is simply a way to have fun sending money back and forth between friends.

Case study: Bunji
The city of Kokubunji in Tokyo has a community currency created by residents called the Bunji (from Kokubunji). The unique thing about it is that when you spend it, you’re required to write a message on it to the recipient. Thus you can express your gratitude by the very act of paying. The Bunji continues to evolve. Not only is it used by people who live in the area, it’s also used by others who sympathize with the idea behind it.