Promoting the SDGs with signs with an extra message

Social action at Hakuhodo DY Group
Hakuhodo DY Group’s corporate social responsibility (CSR) programs are rooted in a dedication to bringing new forms of happiness to people and society. This series of interviews features Hakuhodo people who actively apply their creativity, communication skills, and personal talents to tackling social issues beyond the office, with the goal of building a society where everyone can live a fulfilling life true to themselves 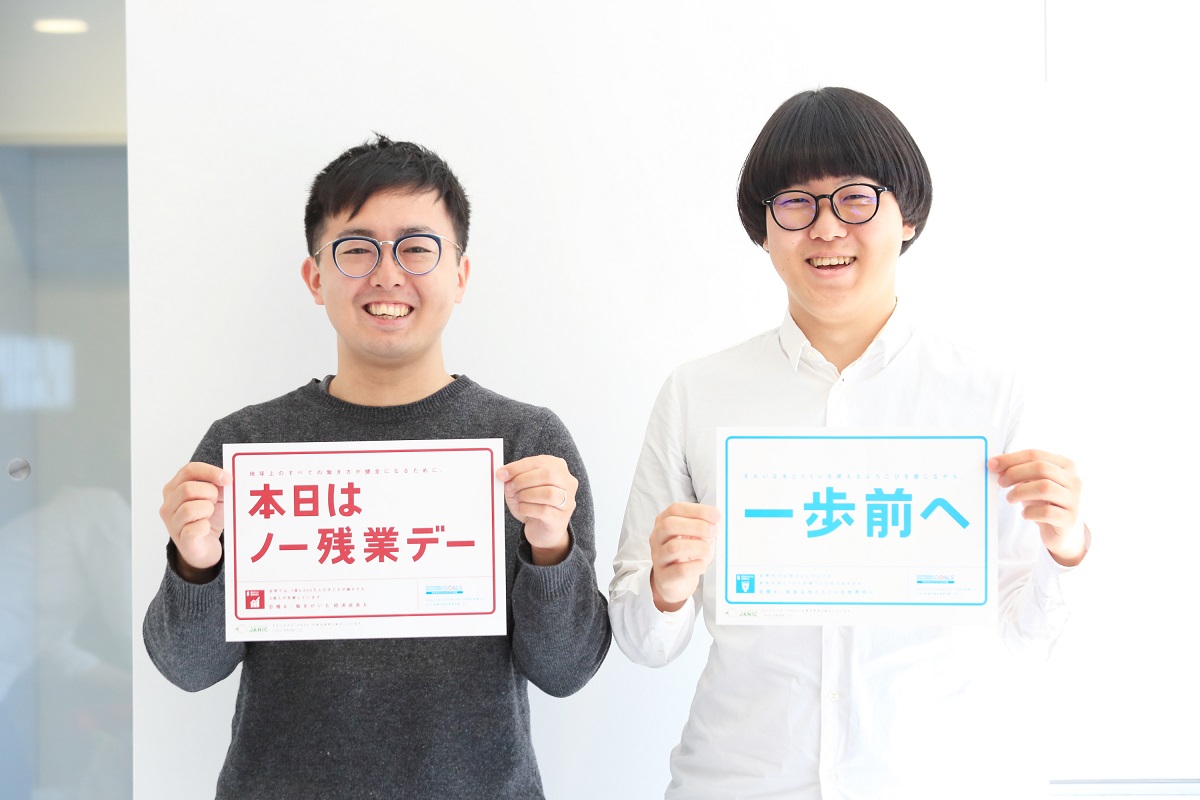 Art director Yuhei Ito (left) and copywriter Shohei Oishi (right), who were involved in production of the “Signs with an Extra Message.” Both were with Hakuhodo at the time, but are currently seconded to TBWA\HAKUHODO

The Signs with an Extra Message were jointly developed by the Japan NGO Center for International Cooperation (JANIC) and Hakuhodo as a tool to promote understanding of the United Nations’ 17 Sustainable Development Goals (SDGs). They aim to foster familiarity with the SDGs and related issues by using words frequently seen in notices. Signs for each of the 17 SDGs have been available to download for free on the JANIC website since October 2017.
See the website here (in Japanese).

The SDGs were adopted at the September 2015 UN Summit as common goals for the international community to achieve in the 15 years from 2016 through 2030. The SDGs consist of 17 goals and 169 targets to be realized by 2030 to solve global issues and realize a sustainable society. As creative volunteers, the Hakuhodo DY Group cooperated with the United Nations Information Centre to produce the official Japanese icons for the SDGs and public service commercials. See the official Japanese icons for the SDGs here (in Japanese). 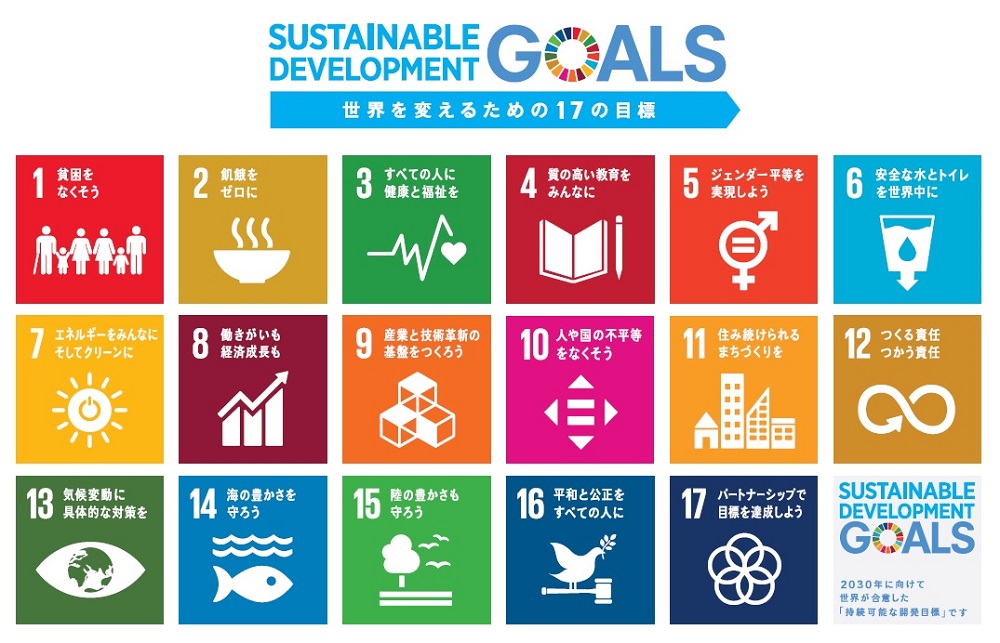 OISHI: Hakuhodo has supported JANIC’s PR strategies since 2013 through such activities as a seminar on how to write news releases and a project to improve awareness of the organization’s NGOs among sei-katsu-sha (the Hakuhodo DY Group’s term for the holistic person with a lifestyle, aspirations, and dreams). Having helped JANIC develop communication strategies and concepts for the three-year period from 2016 after it decided a new mid-term strategy, we got involved in producing a logo, slogans, and statements to realize those communication concepts.

JANIC’s logo. The 17 dots represent the NGOs making efforts to realize the UN’s 17 Goals to Transform Our World. The infinity symbol made up of two circles expresses the idea that JANIC serves to connect the NGOs with the world toward realization of the SDGs. See JANIC’s slogans and related information here (in Japanese). 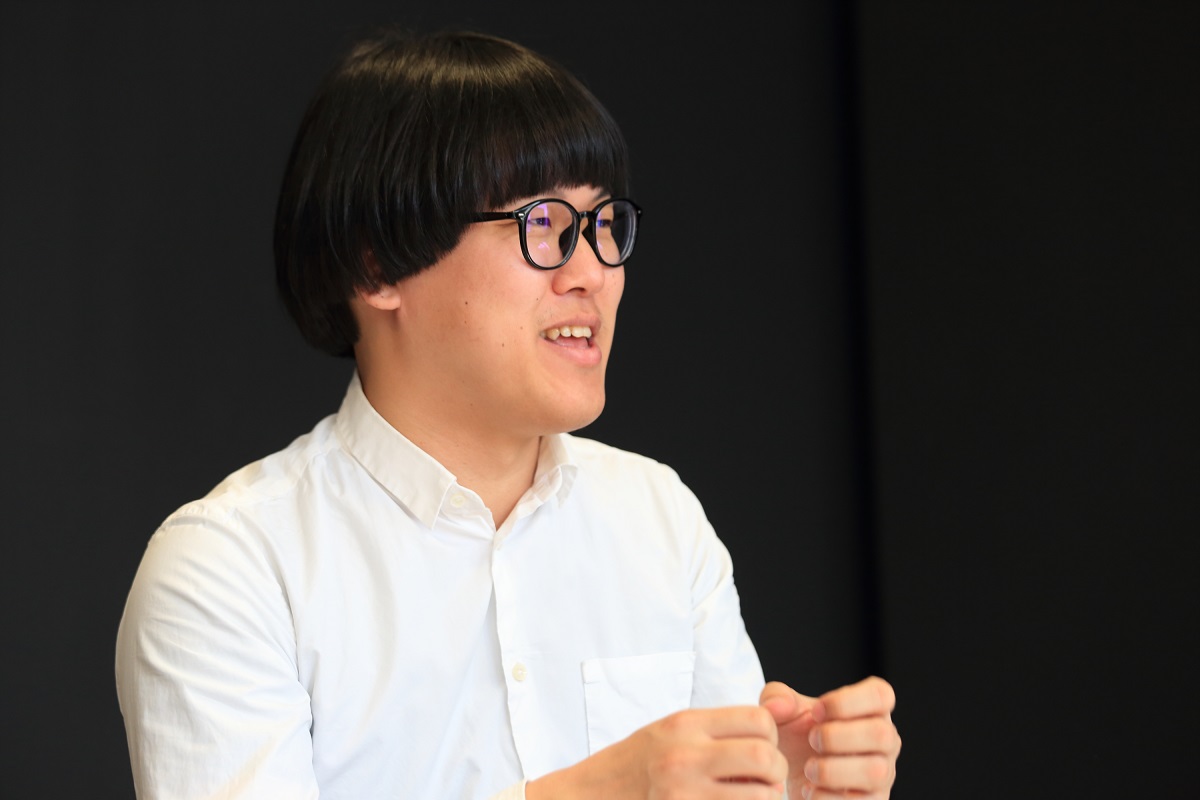 Originally, this pro bono work was supposed to end at that point. However, we learned that not many Japanese people were aware of the SDGs, so we came up with the idea of creating a tool to promote understanding in hope of disseminating the goals to as many people as possible and making them take actions to achieve them.

ITO: The SDGs present goals that can be addressed by anyone anywhere in the world including, of course, Japan. I myself had little knowledge of the SDGs in the beginning, but as I deepened my understanding of the 17 goals and 169 targets, I thought there are many things we could do in our everyday lives. So, I discussed ways we could remind people about the SDGs in various everyday setting with Oishi and we came up with the idea of creating the signs. 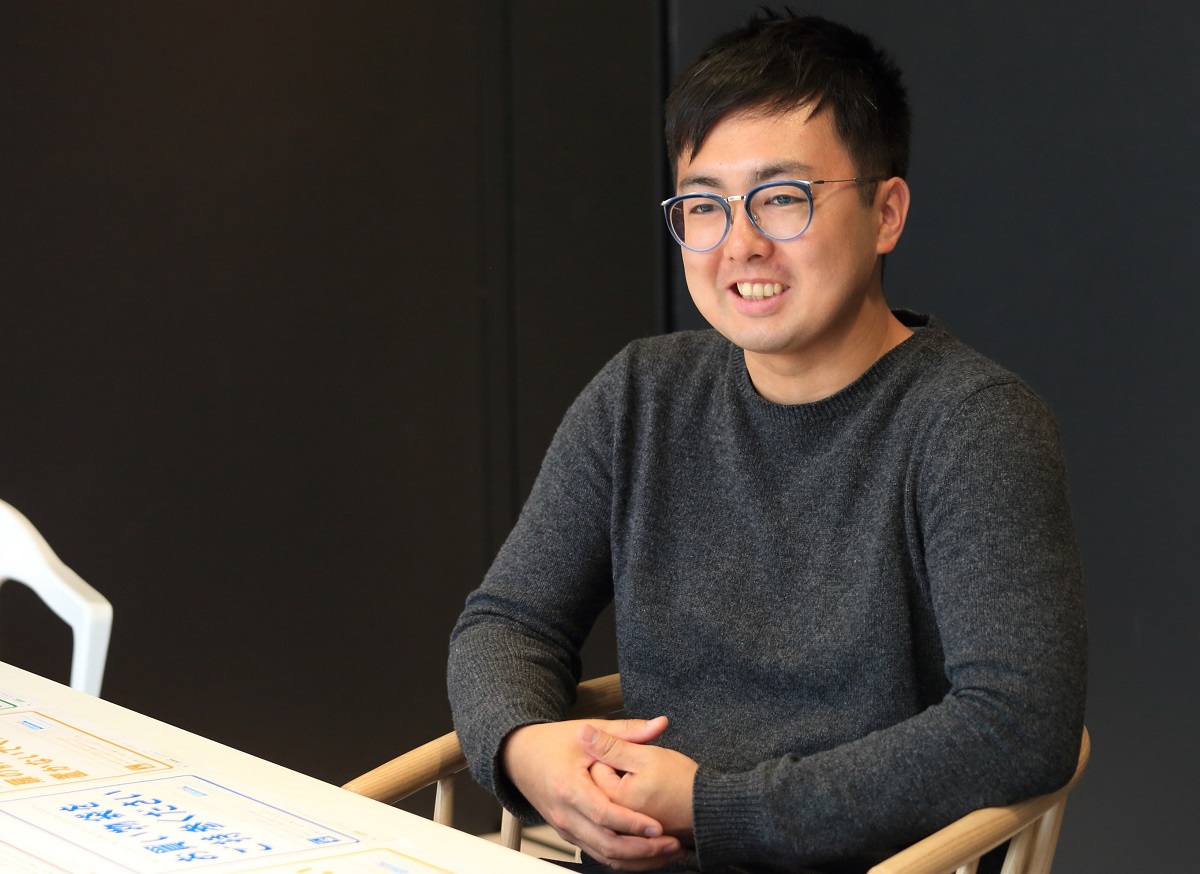 Because the goals matter to every single person in the world, we came up with messages and designs that would catch the eye of sei-katsu-sha

OISHI: You often see important messages like “Caution!” and “Please (do/don’t do something)” written on signs in everyday life. On the Signs with an Extra Message, we added messages to remind people of the importance of addressing the goals of the SDGs, using universal words that can be easily understood by everyone.

ITO: For example, on the poster for Goal 13, “Climate action,” we added a message, “Cold Chinese noodles now available because the global temperature is rising every year. Restaurants serving cold noodles won’t directly lower the global temperature [laughs], but by putting the sign near the air conditioner’s temperature control, we thought we may be able to provide people with an opportunity to think about the global warming issue. 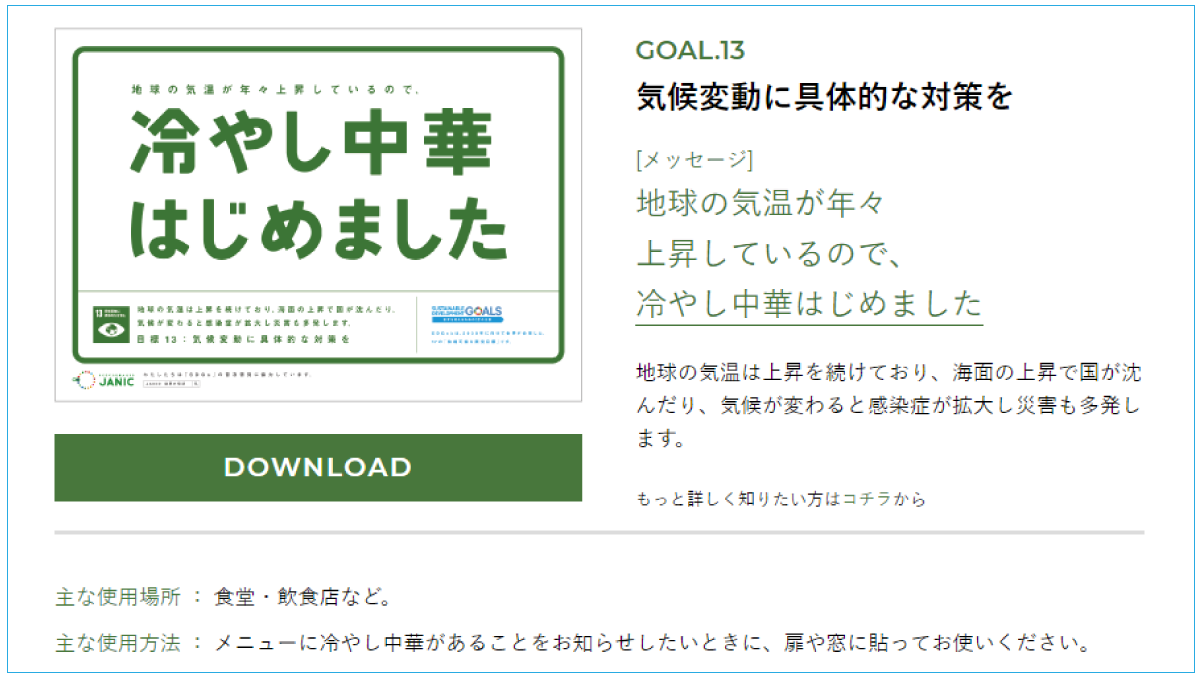 OISHI: Goal 16, “Peace, justice and strong institutions,” and Goal 17, “Partnerships for the goals,” both deal with broad themes, but we tried to capture the issues by using simple words frequently seen in our daily life. And because the goals must be addressed by every single person in the world, we wanted to make them feel familiar to sei-katsu-sha.

On the Sign with an Extra Message for Goal 16, “Peace, justice and strong institutions,” we added, “You may freely express your opinion as a citizen but please refrain from talking about business here. There are many countries and regions in the world where civil activities are restricted for various reasons.”

ITO: We chose the A4 size and adopted a common design with white margin for all 17 posters so that the design would not be cut off when printed at home. We made sure to make them look handmade and imagined actual places where they would be displayed such as offices, homes, and libraries. 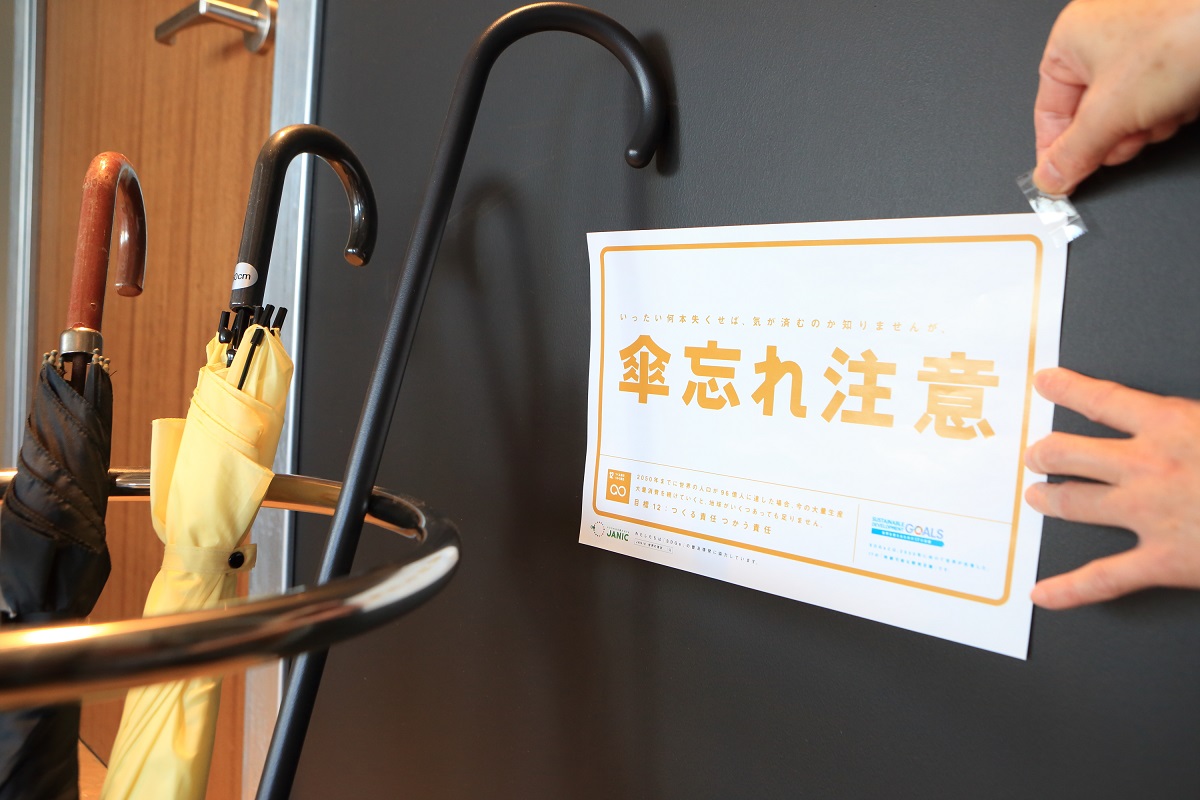 On the sign for Goal 12, “Responsible consumption and production,” we added, “Don’t forget your umbrella. How many times are you going to lose your umbrella? If the world’s population grows to 9.6 billion by 2050 and we continue mass production and mass consumption at the current pace, we could have several earths and it still wouldn’t be enough.” 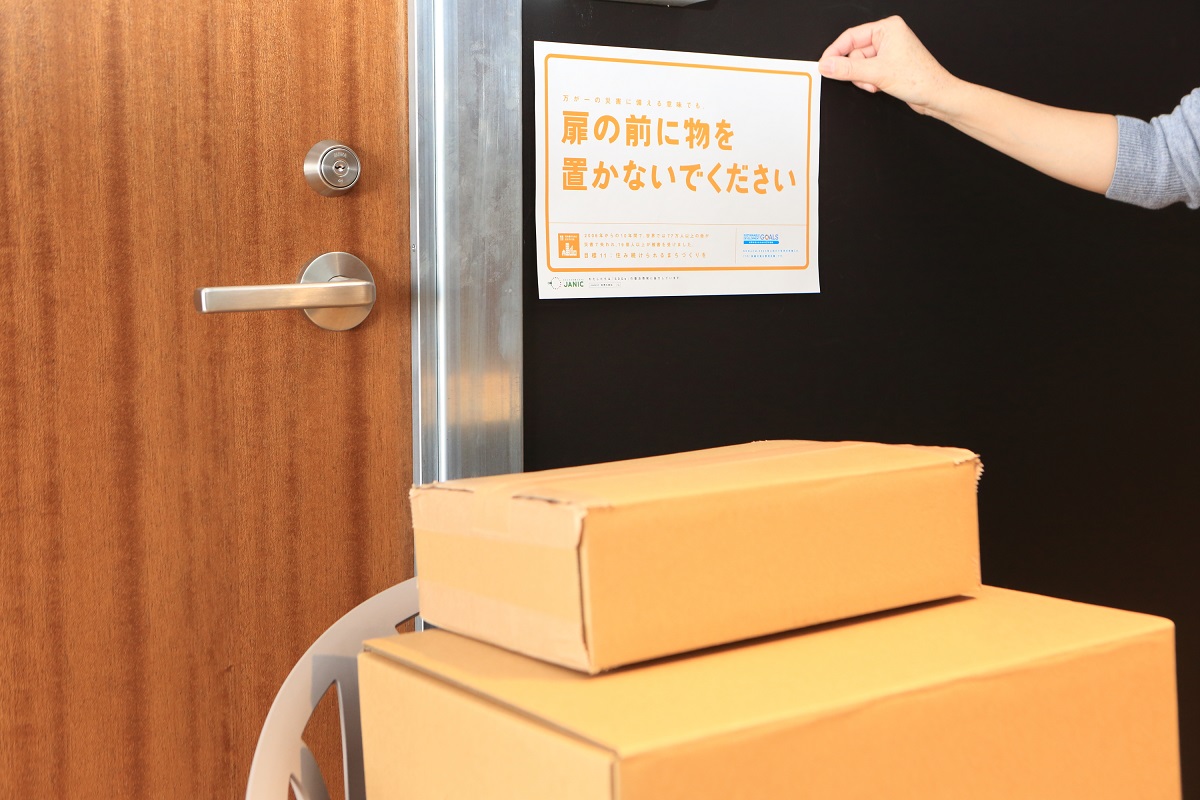 On the sign for Goal 11, “Sustainable cities and communities,” we added, “In order to be prepared for disasters, please do not block the door with anything. During the decade from 2006, more than 770,000 lives were lost and more than 1.9 billion people affected by disasters across the globe.”

We also thought that by making the posters freely available on the website to download, print and post in the workplace, schools, stores, etc., we could deliver the messages to many people. 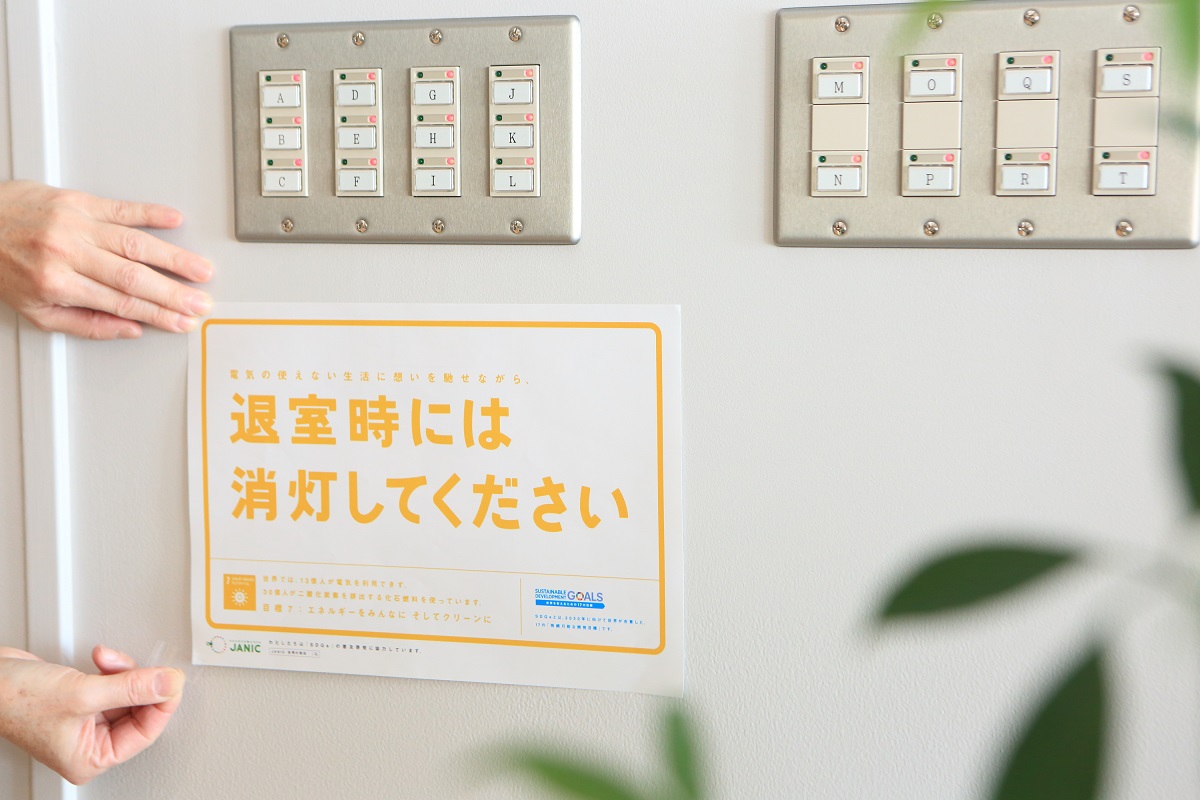 OISHI: Generally, ads serve to connect products and services with sei-katsu-sha and society. This project, which began with revamping JANIC’s logo, aimed to expand the movement toward realization of the SDGs in Japan, too, by communicating the hopes of JANIC—an organization that addresses social issues such as poverty and conflict head-on—through messages that are easy for sei-katsu-sha to understand.

ITO: Efforts to solve social issues take a long time. I think Signs with an Extra Message is the tool that can be used for years for the realization of the SDGs. I hope the signs will help change people’s perspectives and behavior.

OISHI: Through our work with JANIC, I felt their passion for playing a key role in changing the world through the SDGs. Expressing their enthusiasm using the simplest, easiest to understand creative is a strength of Hakuhodo, a company that holds sei-katsu-sha insight dear. Our passion to utilize our skills as an advertising agency to solve social issues is growing stronger. 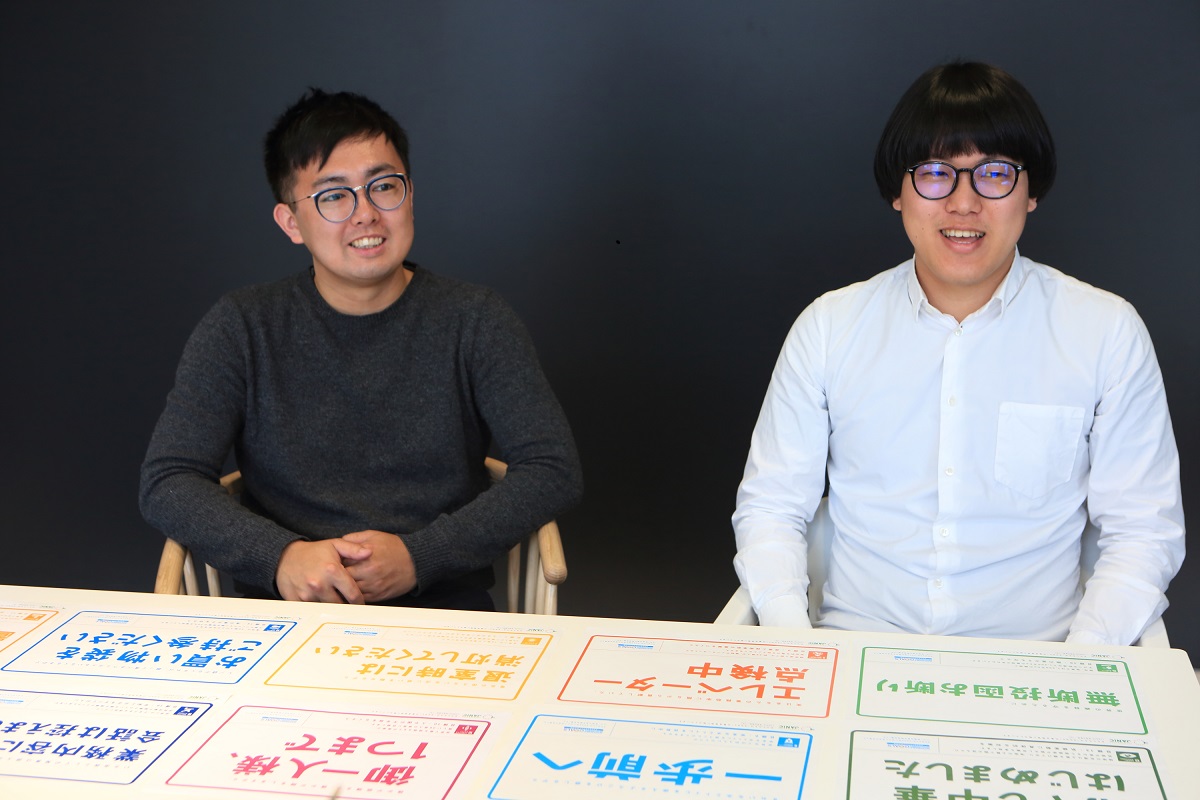 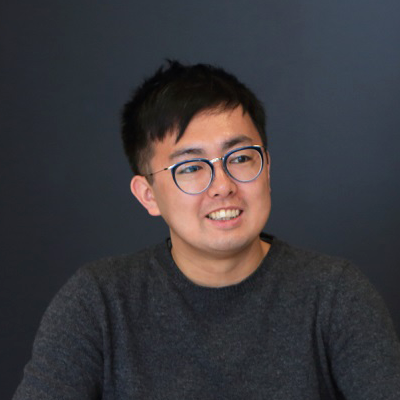 Yuhei Ito
Art Director, TBWA\HAKUHODO Inc.
Joined Hakuhodo in 2008. With a focus on providing art direction for advertising, Yuhei Ito engages in a broad range of production including designing corporate identities and product packages and planning commercials and music videos. He has won many Japanese and international awards. 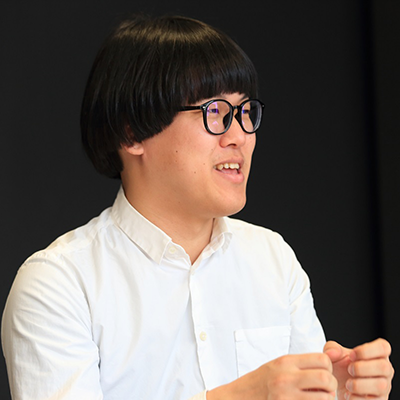 Shohei Oishi
Copywriter, TBWA\HAKUHODO Inc.
Joined Hakuhodo in 2014. Shohei Oishi is in charge of creative for Japanese and international companies in many different sectors, and tries to come up with ideas from words.
SHARE
Back to News & Insights