Crossing borders in pursuit of creativity

Last year, Hakuhodo declared its commitment to using its creativity to provide new value to society. However, the creativity that underpins this has only been communicated indirectly and rarely expressed in words until now. In this series, we delve into why Hakuhodo has creativity from various perspectives. In this third article, we talk to Kentaro Kimura, an articulator of Hakuhodo’s creativity on the world stage. 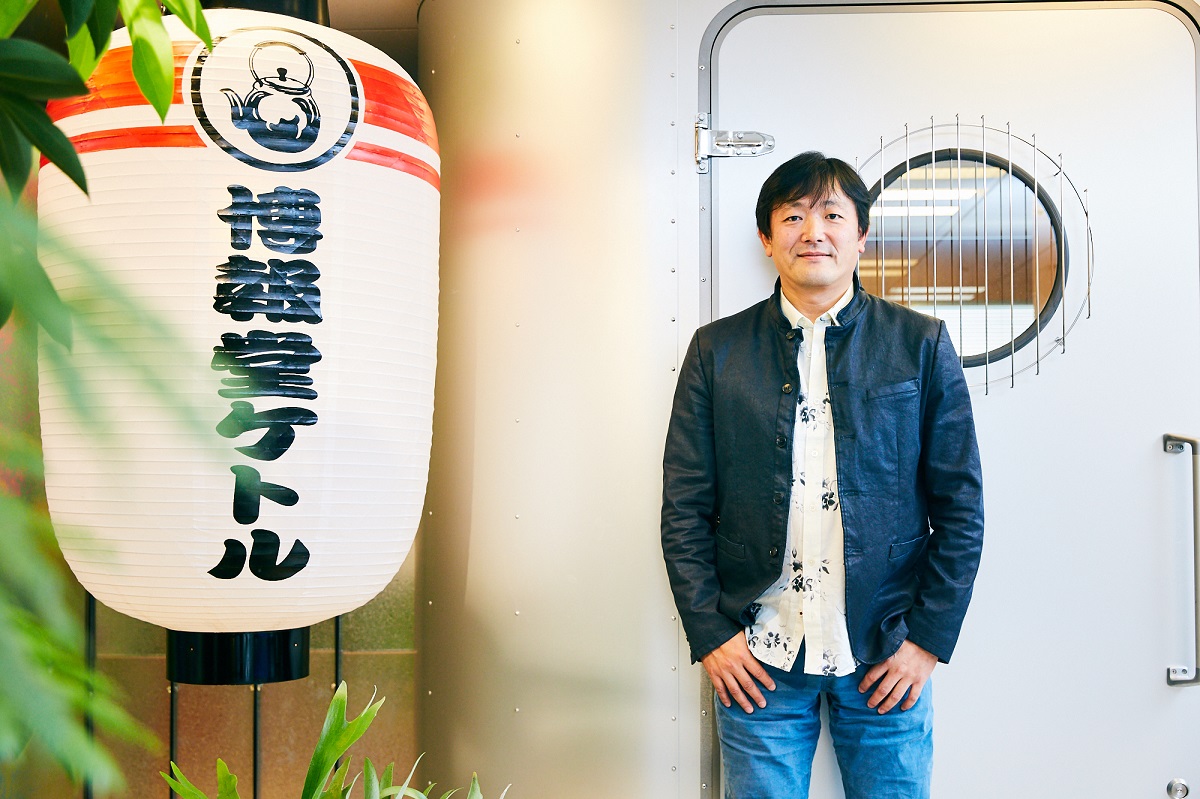 A long-time articulator of Hakuhodo’s creativity

Your role is to oversee creative and marketing for the Hakuhodo Group worldwide and, having served dozens of times on juries at international advertising awards like Cannes Lions International Festival of Creativity, you are one of Hakuhodo’s most globally active people. How did you come to be so deeply involved in global business?

Several things brought me to this point. One is really simple. When you’re young, you’re overjoyed when your plan is accepted by your team. That then makes you want to have a client take it up and put it into action. Once you’ve done that, you want to make your proposal a hit in the market. After you’re able to create hits that get talked about in the industry, you want to hit a homerun that will reach all of Japan, so even your aunt in the countryside will hear about it. After that, it’s creative output that works not just with Japanese people, but people all over the world. And that is how I naturally ended up in the global sphere.

The other thing is that when I look back on the moments where I grew, most of them happened when I was working abroad with amazing people or when I took on things that had never been done before overseas. Seeing the incredible projects being done at international agencies and the smart ways they worked toward their goal opened my eyes; I think the sense of growth I had from these experiences that I couldn’t have had in Japan really opened me up to the outside world.

International business was an extension of your drive to go broader and higher, then.

This is not something unique to just me, but something that is at the very heart of creativity. One standard for measuring creativity is the extent to which it makes an impact. The degree it has a positive impact on people, moves their hearts or changes their behavior.

Keith Yamashita, who was Steve Jobs’ speechwriter and is now with SYPartners, a member of kyu, once said something like “Do work that will impact one billion people.” I love this sentiment.
It doesn’t mean create a massive campaign that will reach a billion people, but create something that resonates with or affects that many people, and personally I think this is exactly what creativity should be aiming for. Something like “Yesterday’s lunch was nice, wasn’t it?” only makes sense to the people you were with at the time, and “I wonder who’ll win NHK TV’s year-end song competition this year?” won’t make sense to anyone outside of Japan. But a story about, say, the real heroes of the Olympics being the mothers who raised the Olympians would resonate with most people the world over. As you pursue creativity, you become conscious of stories and actions that could impact one billion people, the “love story that has everyone in tears,” so to speak. So naturally you go beyond the borders of Japan and into global territory. 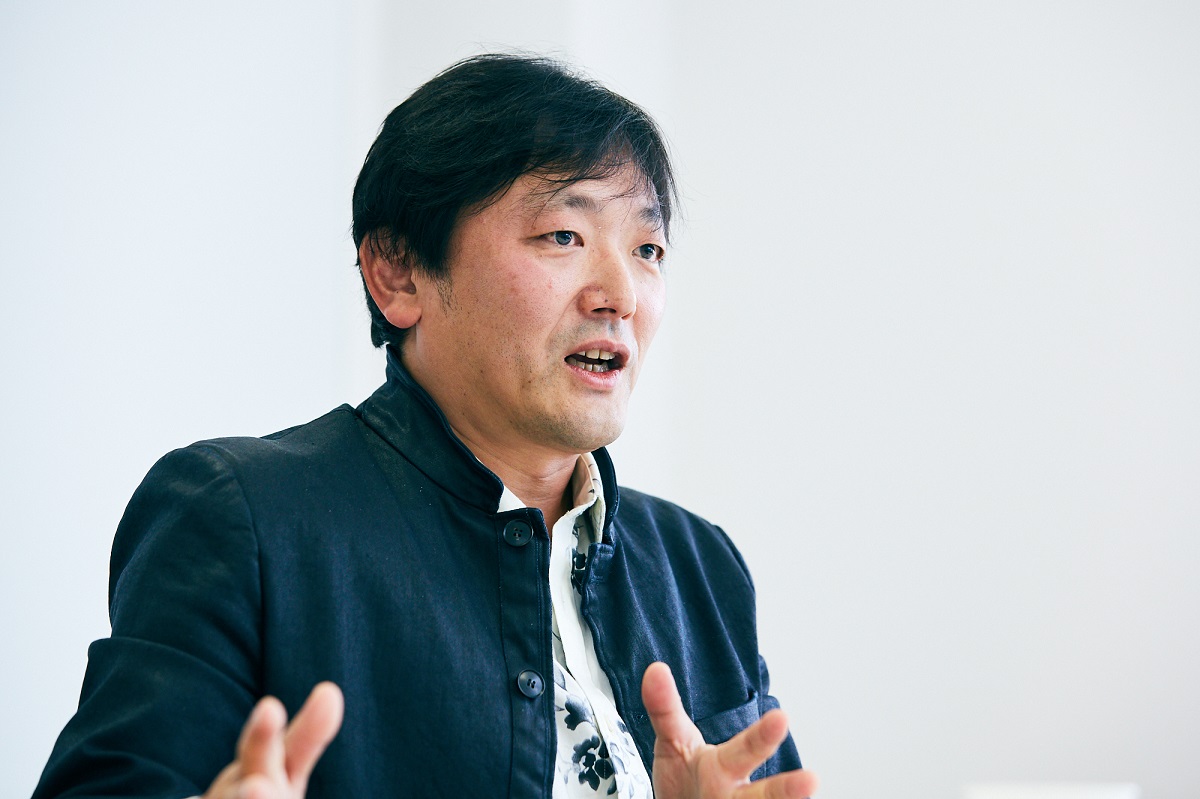 You’ve been involved in various international advertising competitions over many years.

I have entered, tried my hand at and won awards at various ad awards around the world and been on juries and acted as jury president countless times, but the forum where I’ve interacted with creativity the most has been, as you would expect, Cannes Lions.

We were fortunate enough to be able to present an official seminar at Cannes in 2013 and it ended up being really well received. So much so that we have hosted seminars at Cannes in each of the last seven years, and I have taken to the stage myself on five of those occasions. Through these seminars, I think I’ve thought more deeply than most about what Hakuhodo’s creativity is and what Hakuhodo has to offer the world, and spent the most time putting it all into words. This also turned out to be the work of expressing our very raison d’etre in words.

How have you explained what makes Hakuhodo’s creativity different on the world stage?

Over seven years I have demonstrated in various ways the creativity we are able to provide to the world, but when I look back, there have been two key things I’ve communicated.

One is the power of “creative leaps” that deliver real solutions to problems that previous examples and logic could not. This is very much the creativity that led to Hakuhodo’s focus on “Unimagined Ways” over conventional solutions.

The other is Hakuhodo’s unique “Market Design” concept and the potential it holds. In other words, the fact that our creativity can deliver in industries far beyond advertising. This led to what we now call the “Sei-katsu-sha Interface Market.”

These two things are the biggest features of Hakuhodo’s creativity and, to my mind, Hakuhodo’s purpose and uniqueness.

Let me explain in a bit more detail. This is from the first seminar we presented at Cannes in 2013. Titled Creative Alchemy, it filled the biggest venue at the festival, which seats 3,000 people. 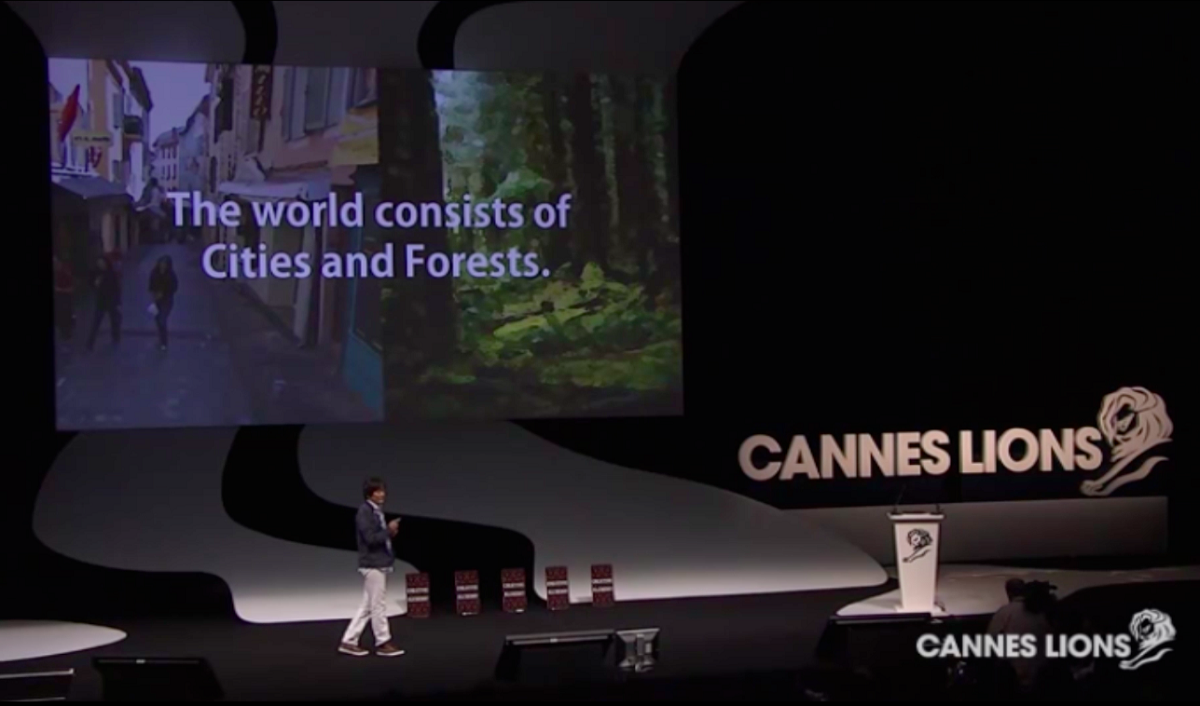 The seminar started with this short parable:
“Once upon a time there was a kingdom where the sun never shone. One day, the king called two of his retainers to ask them if there was a way to make the entire kingdom brighter. The first retainer scoured the entire city and found a bright lantern with the latest technology, but it did not make the whole kingdom brighter. The second retainer wandered the forest aimlessly for a few days and, with alchemical processes he stumbled upon by accident and material he found in the forest, he created a magical stone that gave off a blinding light. He took this back to the castle. When he opened the box containing the stone in front of the king, the whole kingdom was suddenly bathed in light.”

In this tale, the city represents the conscious world and forest the unconscious. The lantern represents logic and the magical light-emitting stone ideas. “City” thinking is optimized thinking that comes up with conventional solutions that can be verified using data and previous examples, whereas “forest” thinking is value creation thinking that comes up with Unimagined Ways that cannot be reached with logic alone.

I still conduct this seminar all around the world, and have presented it more than 100 times in over a dozen countries.

Market Design, the other key thing, is a unique concept that Hakuhodo has adhered to for a long time.

Yes. The concept talks about using creativity to not just create advertising, but all kinds of new markets and businesses. Many companies besides Hakuhodo have creativity, but based on our Sei-katsu-sha Insight philosophy, we have the creativity of pros at moving people that have a track record in working with all kinds of industries. There is a whole universe outside of advertising where we can demonstrate this power. In our 2014 seminar, we put forward our ideas about the future of the advertising industry in ten years’ time based on this thinking. 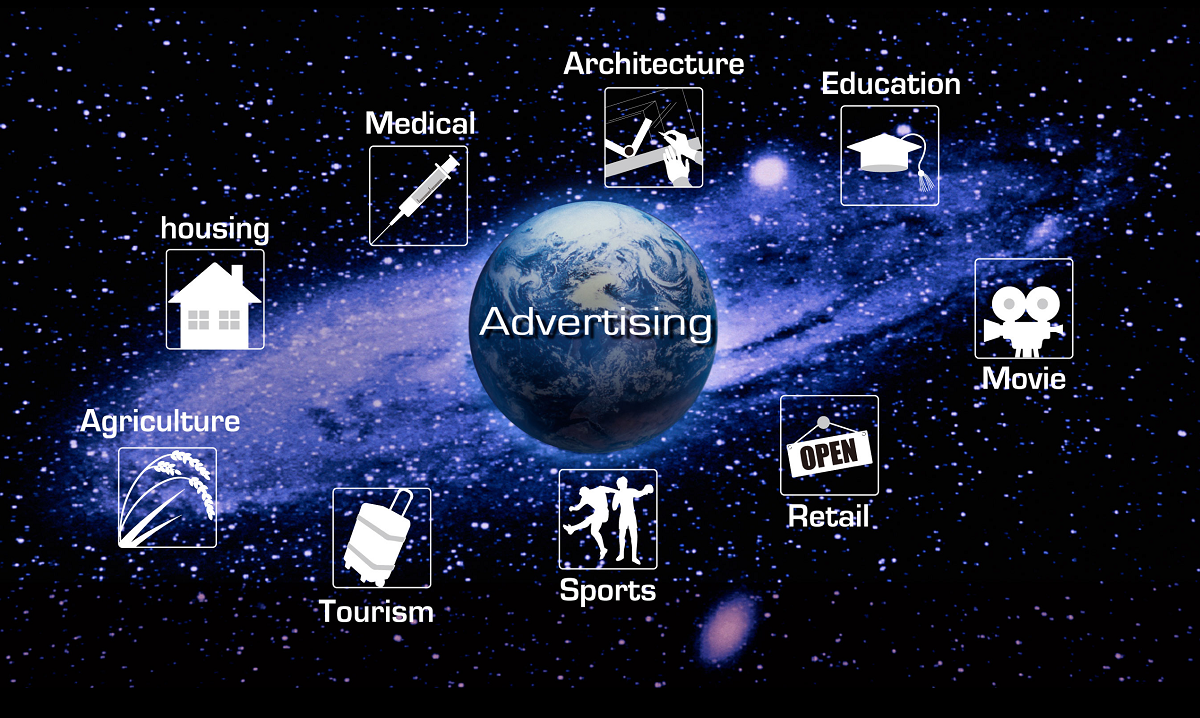 There is a trend in the global ad industry toward fragmentation and specialization into specific fields and businesses, and the full-service model that Hakuhodo follows is actually unusual, but this, I think, is another unique thing about us.

So Hakuhodo is starting to say the same things that you’ve been saying for years.

This January, I was super excited by CES (Consumer Electronics Show) in Las Vegas. This is because Toyota announced a city brimming with technology it honed in manufacturing cars, and Sony announced a car with technology it developed in electronics. It made me think that, in the same way, we at Hakuhodo seek to create exciting lifestyles filled with creativity we’ve sharpened in advertising.

As this goes on, I am standing up in the global domain. My challenge is to transform Hakuhodo from a Japanese ad agency that operates internationally into a global creative company whose roots are in Japan. 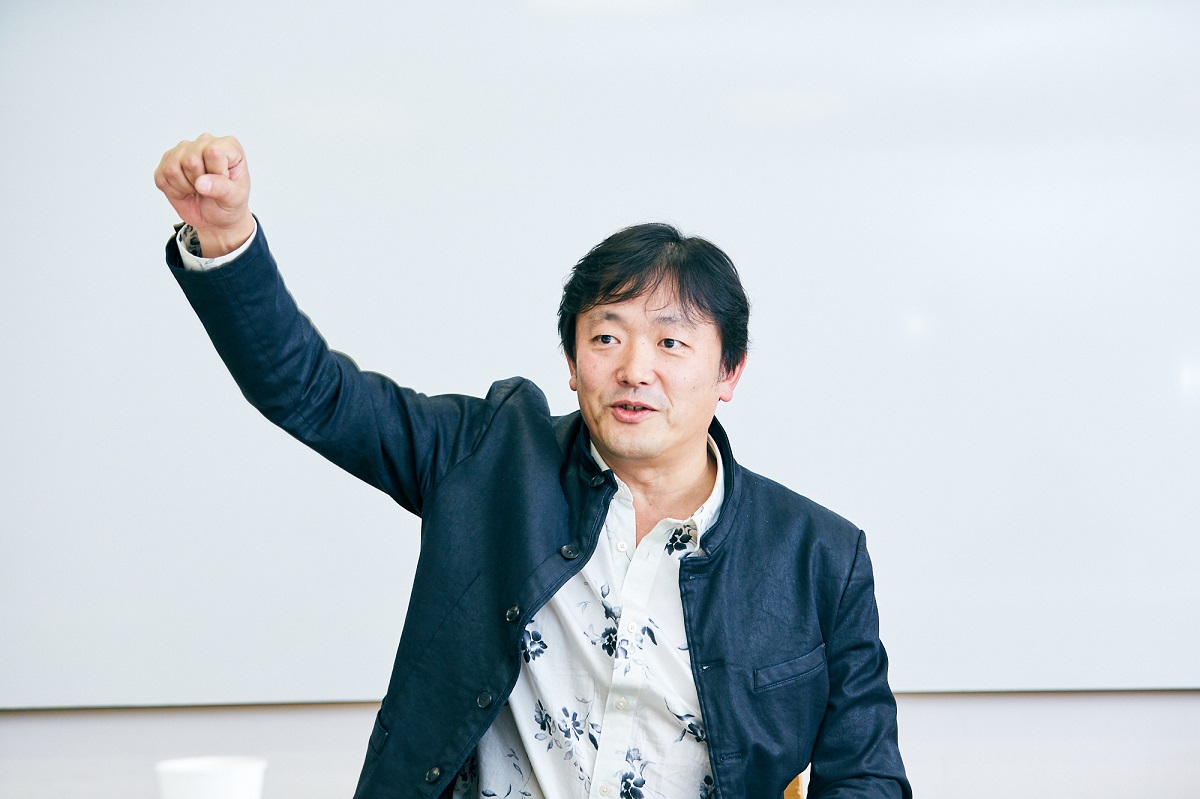 In other words, you want to make Hakuhodo into an international company? What makes you think this way?

Because I am convinced that elevating our creativity is akin to diversity. Nothing new comes when similar types work together. The wider the foot of the mountain, the higher the mountain can be. Likewise, the more diversity you have, the higher the creative leaps you can take.

Japan is a small country and an island nation. As a result, cultural diversity is limited. If we don’t cross borders and proactively work with as many overseas people as we can, we will struggle to get access to new perspectives and ideas beyond predictable, conventional solutions. For instance, the impact of unexpected opinions and ways of thinking just from having meetings with staff from other countries and discussions with judges from various countries helped me break out of my creative shell. This makes me realize how little of the wider world I know when I’m in Japan.

Opening up to the world and accelerating global diversity will expand Hakuhodo’s creativity and bring individual growth, too.

Previously, advertising in what were known as the Four Mass Media [TV, radio, newspapers and magazines] had obvious national borders, but with digitalization and the internet, the borders of content and services have disappeared. We’re in an age where whether you’re selling products or services, or sparking ideas or actions, you are going to run into roadblocks at some point if you don’t think globally. It often turns out that what is perfectly normal in Japan is very much not normal in other countries. I think we are already living in an age where we need global sensibilities when we conceive of ideas and make decisions.

So enhancing diversity will also help enhance Hakuhodo’s culture of valuing the eclectic over the generic.

Hakuhodo has always recognized the value of diversity on a deep level, but from where I stand, we still have a long way to go. I have a sense of crisis about this, that we will not survive if we don’t push for greater diversity.

I plan to spread this mindset to staff inside and outside of Japan through my involvement with two organizations I lead, Hakuhodo’s Global Integrated Solution Division and Hakuhodo Kettle.

We have begun various initiatives to bring in greater diversity, like OTJ training in Japan for overseas personnel, personnel exchanges, strengthening our overseas network and building global alliances, but this is just the beginning. I want to take on every challenge needed to make Hakuhodo a true force in creativity. Let’s all reach creativity that moves one billion people together. 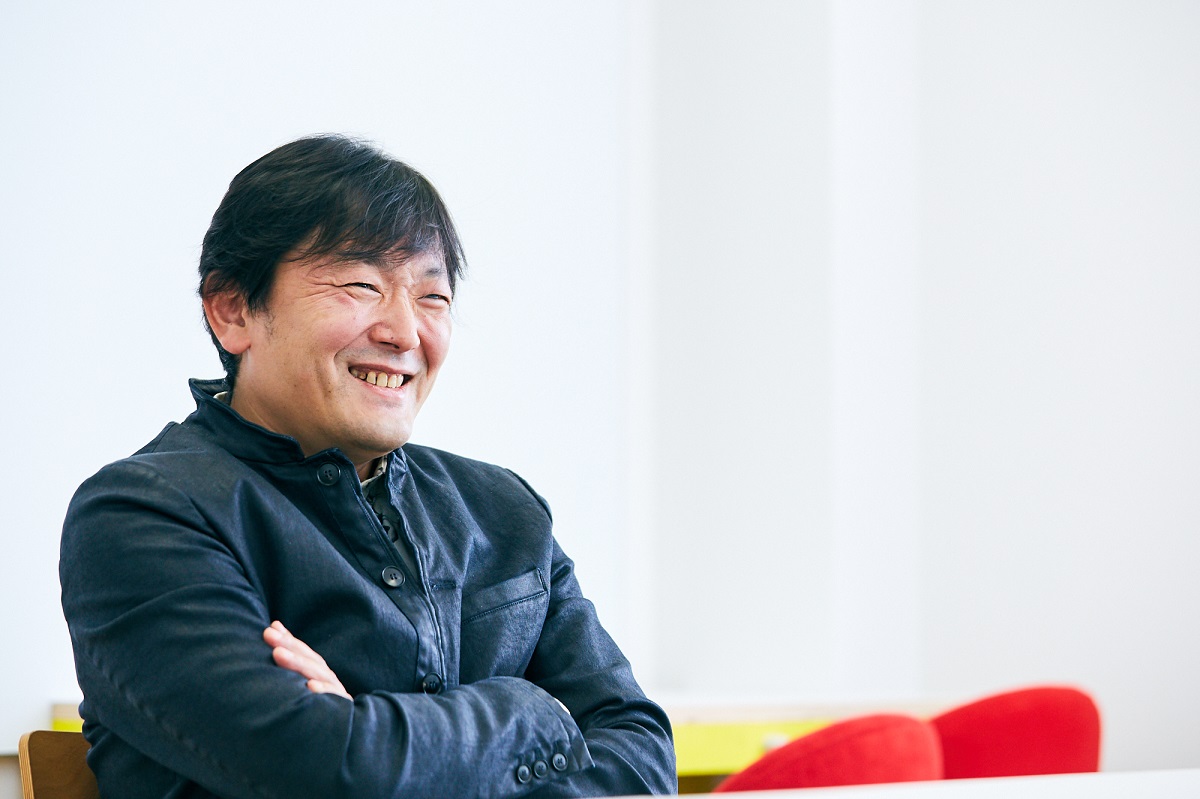 Kentaro Kimura
APAC Co-Chief Creative Officer, Hakuhodo Inc.
General Manager, Global Integrated Solution Division, Hakuhodo Inc. and
Director & Executive Creative Director, Hakuhodo Kettle Inc.
After joining Hakuhodo in 1992, Kentaro Kimura developed a cross-disciplinary style that takes in various specialties, from strategy to creative to digital and PR. He established Hakuhodo Kettle as Co-CEO in 2006. From integrated campaigns based around mass media advertising to innovative campaigns pivoting on digital and outdoor, he has considerable expertise in a broad range of areas. He has won over 150 Japanese and international advertising awards, including eight grand prix awards, and has served on juries at international advertising festivals over 25 times, including sitting on the Titanium jury at Cannes Lions, and serving as jury president at ADFEST and Spikes Asia. He also has extensive international speaking experience. In 2017, he was appointed to a position overseeing global creative at Hakuhodo, taking up the positions APAC Co-Chief Creative Officer and General Manager of the Global Integrated Solution Division, in addition to his role at Hakuhodo Kettle.
SHARE
Back to News & Insights