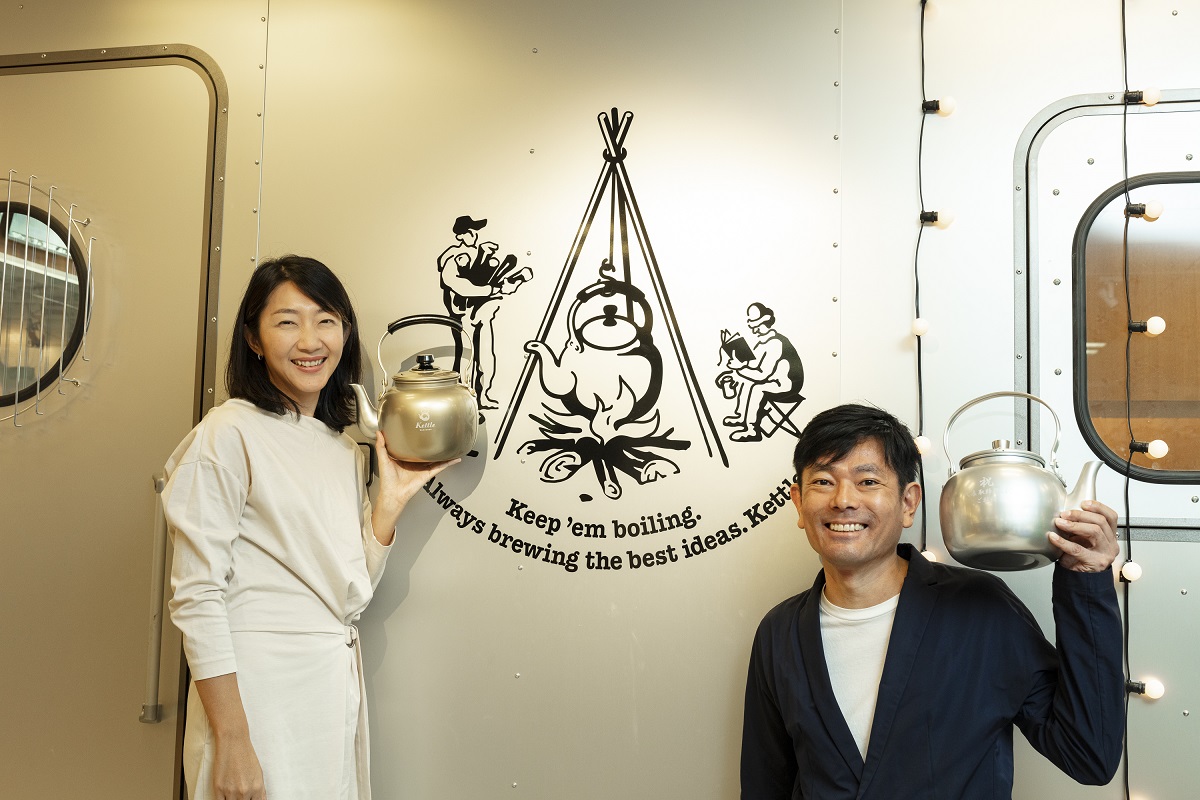 Since its conception in 2006 under the concept of “Boil the World,” Hakuhodo Kettle Inc. has forged a reputation for breaking away from traditional industry norms, developing its own unique business practices and values. In this joint interview Co-CEOs Ikuko Ota and Ken Funaki, the new faces of Kettle’s leadership, discuss recent developments and their future vision for this hotbed of creative solutions. Ota and Funaki were appointed to their positions on October 1 this year.

The pair have assumed the roles established by Koichiro Shima and Kentaro Kimura, founders and Co-CEOs of Kettle since 2006. While Shima and Kimura will continue to be involved as Directors, Ota and Funaki are already bringing their own perspectives and strengths to the leadership.

“The two former CEOs were opposite types of people, and Ken and I are also quite different. This allows us to have a 360 degree of the world,” Ota points out. “The important thing is to respect each other’s differences.” 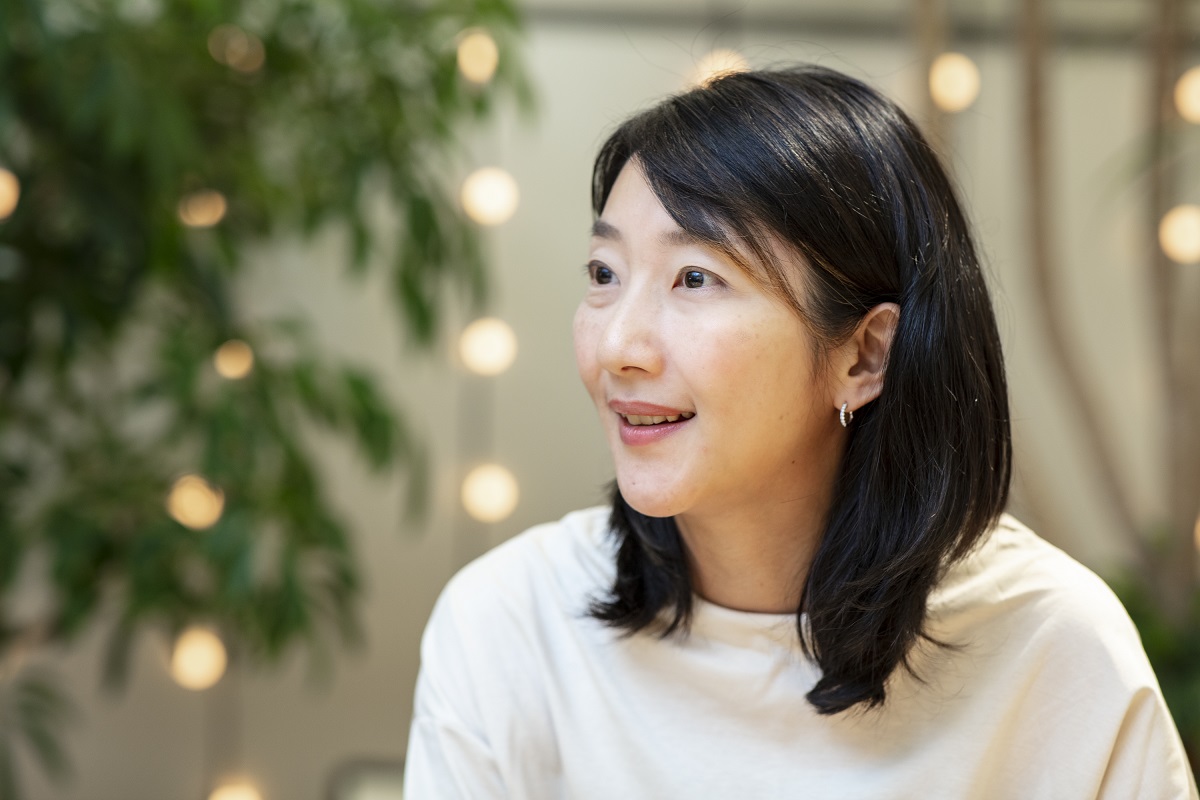 Funaki has been involved with Kettle since the outset, after being invited to join the company by Shima and Kimura while working at Creative Vox, another Hakuhodo Group company. “We actually only met for the first time in January 2006, and then the company was started in April,” Funaki recalls with a grin. “It sounded interesting, and so I moved over, without really discussing it with anyone!”

Meanwhile, Ota was building her career at Hakuhodo Inc., where she initially had the chance to work with Shima and Kimura in 2005. “I realized I was overlapping more and more with Kettle’s clients, so I decided to join their team in 2012,” she says.

It takes a community

One major initiative under this new leadership was the launch of their brand-new website, Kettle Kitchen, this November. Japanese corporate websites are typically conservative both in their design and features, but Kettle Kitchen is bubbling over with an eclectic mix of content and viewpoints.

Kettle Kitchen (in Japanese only): https://www.kettle.co.jp/kettlekitchen/

“Rather than a company website, it is more a daily record of the goings-on at the company,” Funaki explains. “For example, we’ll have columns by the staff about their activities. Our goal is to show what our team members and our creative talents are doing, so that even regular (non-industry) people can read about and understand ‘the Kettle way’.”

“Until now the website has been a chance for people to know about our works and campaigns, but through this new site, they can learn about our people, too,” adds Ota.

The pair draw on a Japanese shotengai as a metaphor for their new website’s concept. While the literal translation is “commercial district,” the shotengai has been the traditional heart of the local community in a Japanese town, where small business owners work and live side-by-side, respecting one another’s diversity while simultaneously finding strength in their commonalities.

“For example, people might go there initially to look at one shop, but then another shop catches their eyes, so they go in,” says Ota, expressing the hope that visitors to the website will be able to “shop around” and read whatever content appeals to them.

Fostering talent with the “Kettlers” 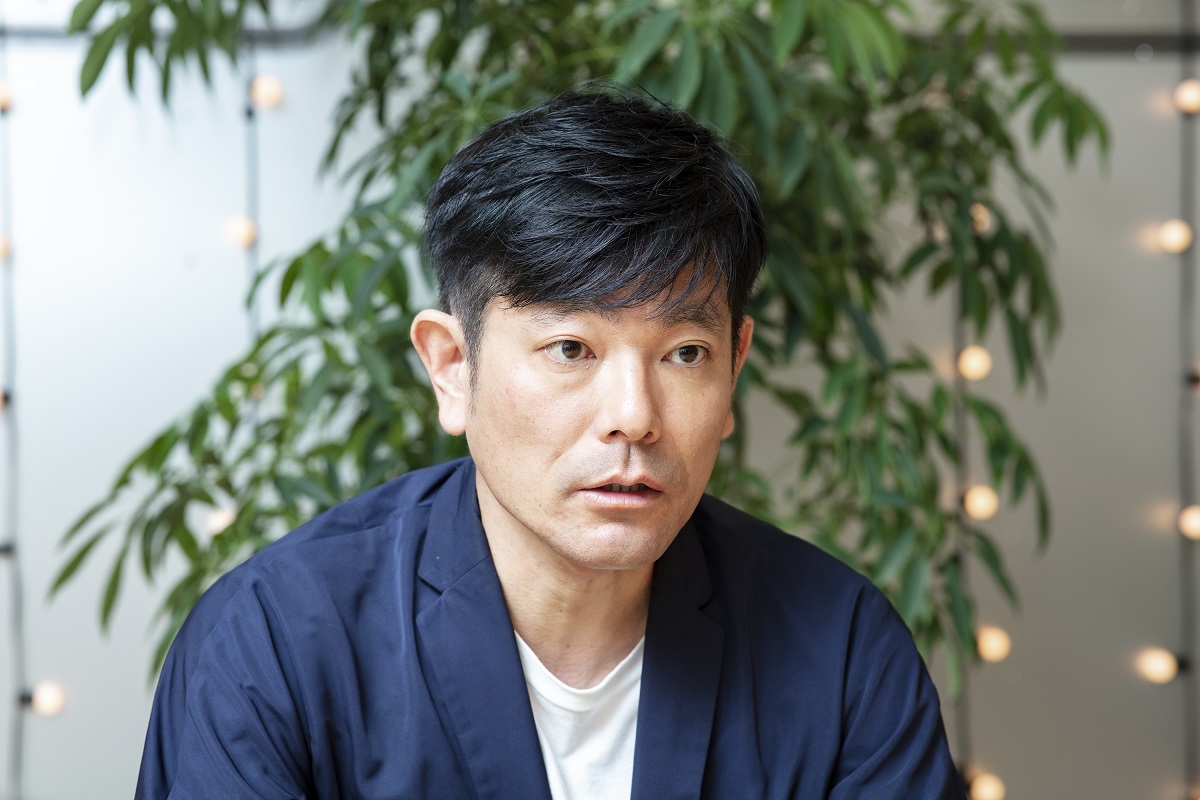 Moving forward, Kettle Kitchen is just one example of the direction Ota and Funaki are taking with their management style, which is in turn based on a unique core concept called “method-neutral.” Instigated by Shima and Kimura, method-neutral transcends conventional advertising techniques by using multiple media and platforms to bring a brand to its target audience.

This is still very much the case at Kettle, but now Ota and Funaki are seeking to expand the original vision behind method-neutral into Kettle’s entire purpose and mission, shaking up the existing status quo in the advertising world in the process. “While bringing in new blood from outside the advertising industry, we want to bring out transformation,” Ota says. This translates to bringing talented people on board from various professions, including some whose background was hitherto completely unrelated to the advertising industry.

Method-neutral is also reflected in the roles played by their team members, affectionately known as “Kettlers.” “Our staff do everything, from feasibility studies and the financial side, to art direction and writing the press releases,” Ota explains. “We have to add titles to our name cards, but we actually don’t use such titles in-house. We are all Kettlers.”

Funaki notes that this way of conducting business surprises people outside the company, who might consider it too vague, but he says that Kettle is truly a “one-stop” company, where they can handle anything and everything required to meet their clients’ needs. Funaki believes this collaborative approach is one of Kettle’s major strengths.

Kettle takes the whole company away for two nights on what is known as “gasshuku” in Japanese. This is not unusual in Japan, where such trips are used as a chance for employees to bond while receiving training. As might be expected, however, Kettle boils up an experience that departs from conventional offerings.

“We’ve been doing this since the very start, but the bar gets raised year by year,” says Funaki. “The staff do the planning and it takes around six months to work out the logistics.” Previous trips have seen the Kettlers trying their hands at Chinese cooking in Taiwan, receiving instruction in table manner etiquette in Kobe, and even spending time on an uninhabited island.

Following the corporate rebranding, the next trip will be planned by the over-40s cohort. Ota believes that learning something from scratch through these experiences can be particularly valuable for the more senior Kettlers. “As adults, we lose the opportunity to try something for the first time, experience failure and get ‘told off’ by someone for it, especially as we get older. In the process, we end up sticking with the way that was previously successful,” she explains. This links to the philosophy behind the company’s “method-neutral” core concept, which requires staff to approach things with no preconceived ideas.

Another recent development at Kettle was last year’s opening of Train Train Train, a shared workspace in Shibuya, one of Tokyo’s most creative and stylish areas. Along with the main office in the advertising hub of Akasaka, this new addition means Kettle now has two bases for launching creative solutions. The facility also includes fee-based co-working services for freelance creators, rental space for events, and a café-bar.

Train Train Train is a joint initiative with several other creative firms, and is located at Shibuya Bridge, in an area where the Tokyu Toyoko Line tracks previously ran. “The names ‘Train’ and ‘Train Train’ had already been taken, so we went with three trains!” Ota quips.

There is plenty to occupy their time and attention on the domestic front, but Ota and Funaki are also conscious of the importance of maintaining Kettle’s position as a global player, too. “We are still building our own manifesto,” says Ota. “We want to continue with Koichiro and Kentaro’s legacy of ‘Boil the World’ to build on what has gone before, but putting our own spin on it.” 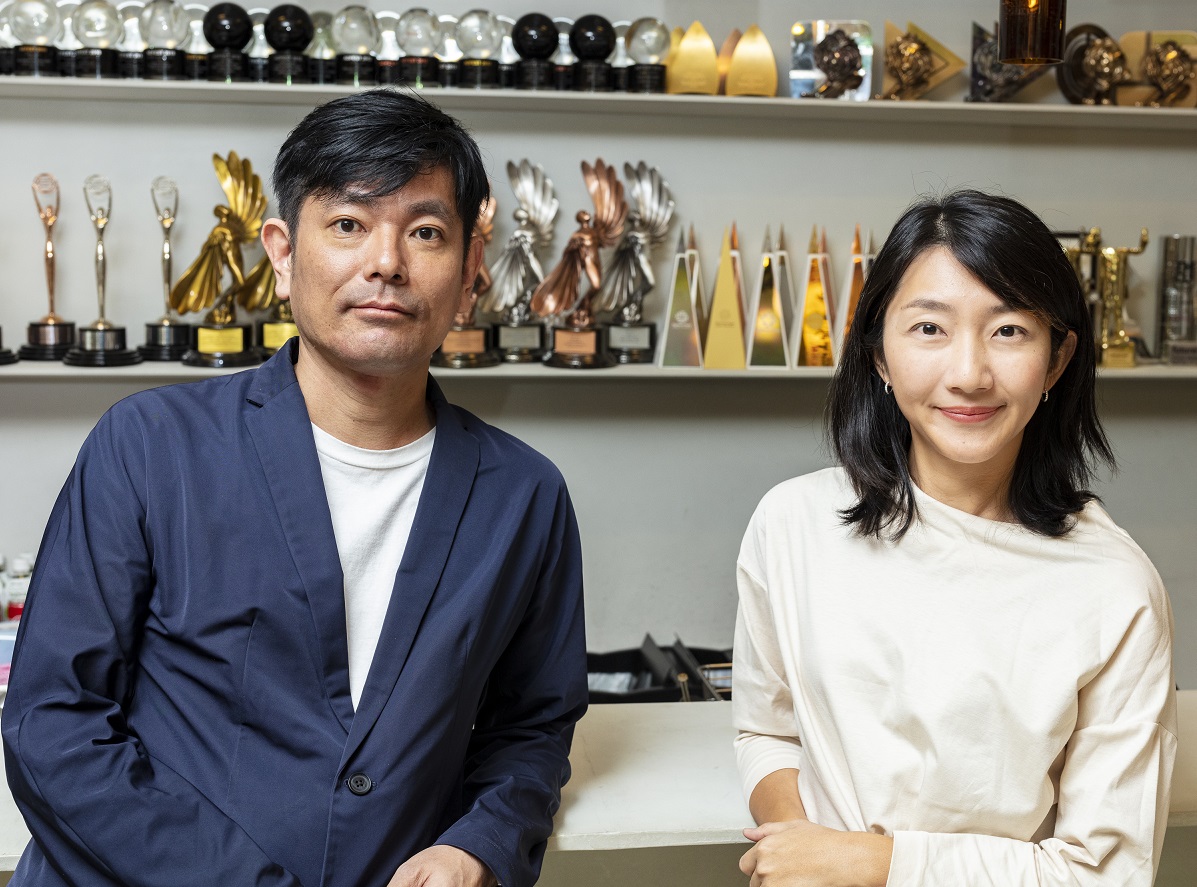 “I don’t really speak that much English,” Funaki admits. “But I think that issues with verbal communication will be reduced with technology, and that’s really pleasing. I’d like to continue with social innovation and attract companies that want to work with us—to be easily approachable for both international and domestic clients.”

Both Co-CEOs see themselves very much as player-managers. As an original member of Kettle from the start, Funaki believes it is important to verbalize the company’s corporate culture in order to impart it to newer team members. He points that this links to hiring, too. “To attract new people, we have to be able to convey the company’s DNA to them—for them to understand what Kettle is about.”

Referring back to the shotengai analogy, Ota says, “I want to be like the head of a neighborhood business association, who arranges events—but I still want to run my own shop, too,” she adds with a smile. 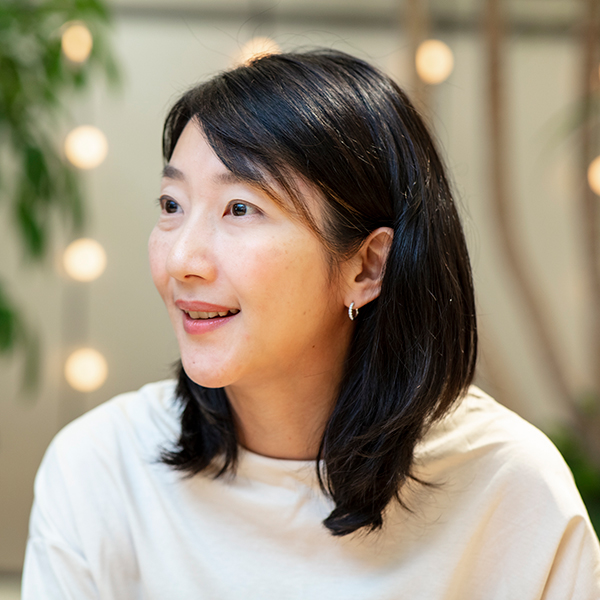 Ikuko Ota
Co-CEO
Hakuhodo Kettle Inc.
Ikuko Ota joined Hakuhodo Inc. in 2001. As a strategic planner, she was involved in planning management and marketing strategies and product development for various clients. Seconded to Hakuhodo Kettle in 2012, she constructed integrated communication for various clients as a creative director. In 2015, she established a specialist PR team at Hakuhodo Kettle and served as its leader. She has won numerous advertising awards, including at Cannes Lions International Festival of Creativity. In 2018, she served on the PR Jury at Spikes Asia.

Ken Funaki
Co-CEO
Hakuhodo Kettle Inc.
Ken Funaki joined Hakuhodo Inc. in 1996. Following a stint at Hakuhodo Creative Vox, he was instrumental in establishing Hakuhodo Kettle in 2006. Drawing on perspectives from his art background, his work involves developing businesses for clients, commercials, events and PR in all media. He has won Silver at Cannes Lions, Gold at Clio Awards, Gold at ADC Awards, a Yellow Pencil at D&AD Awards and Gold at Spikes Asia, among other awards.
SHARE
Back to News & Insights