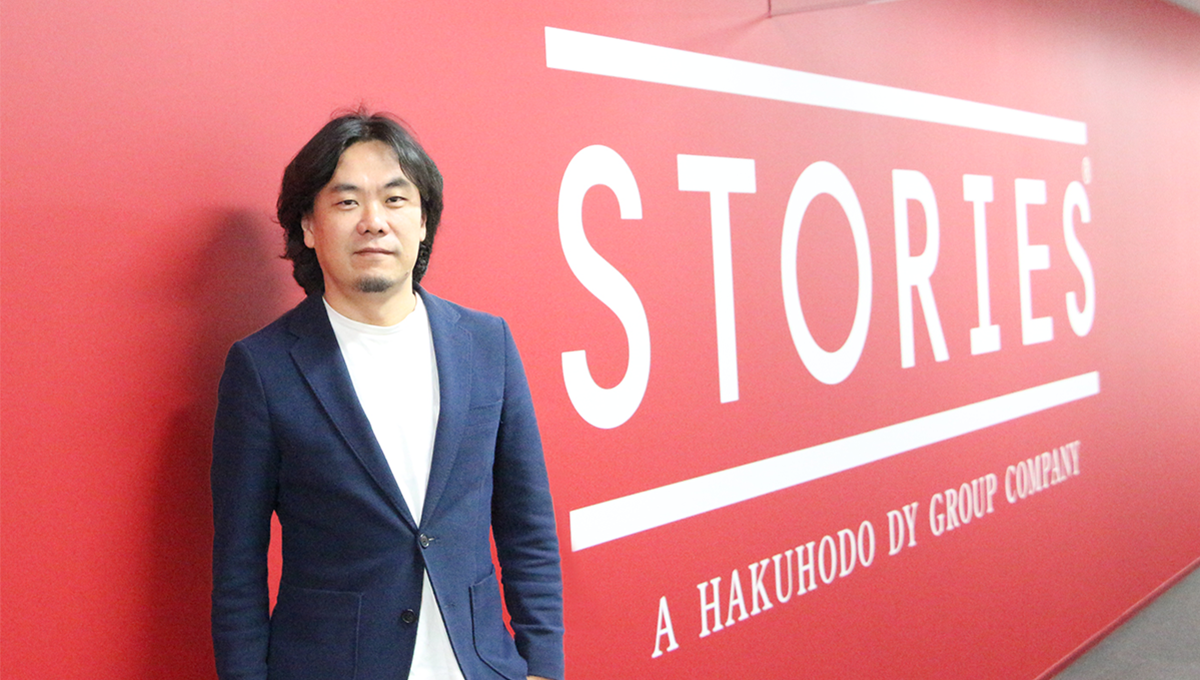 The CEO and Creative Producer of STORIES® and STORIES® International, Tomoya Suzuki divides his time between Tokyo and the USA. Stories manages and represents more than 40 creative talents in Hollywood and Japan with backgrounds in film and advertising, and produces branded entertainment for a global audience. As a writer, producer and director, Tomoya has already worked with some of the world’s most well-known brands, and is now branching out into the Hollywood features and TV scene.

Tomoya Suzuki, CEO of Stories, is a creative dynamo. His Japan team have just moved into a new and bigger office in the heart of downtown Tokyo, and on Oct. 29, 2018, the firm received a USD 2.7 million (JPY 300,000,000) capital increase from Hakuhodo DY Media Partners, Inc. Juggling projects both in Japan and in Los Angeles, with his US subsidiary Stories International, Inc., his days are jam-packed—and he wouldn’t have it any other way.

“I don’t separate my work from my private life. I’ve always been fascinated by the power of stories, of text, ever since I was a child. That is why I named the company ‘Stories’,” he explains.

“As the number of screens increases, all this information, including SNS, news, drama, and games, are rivals of advertising communications. We are awake for around 15 to18 hours—how do we make use of that time? Until now the brand communication has been “consumer” focused, but now if we want their time, we have to entertain them by considering them as an audience who seeks entertaining communication. That’s why the future of advertising is branded entertainment,” Tomoya says. 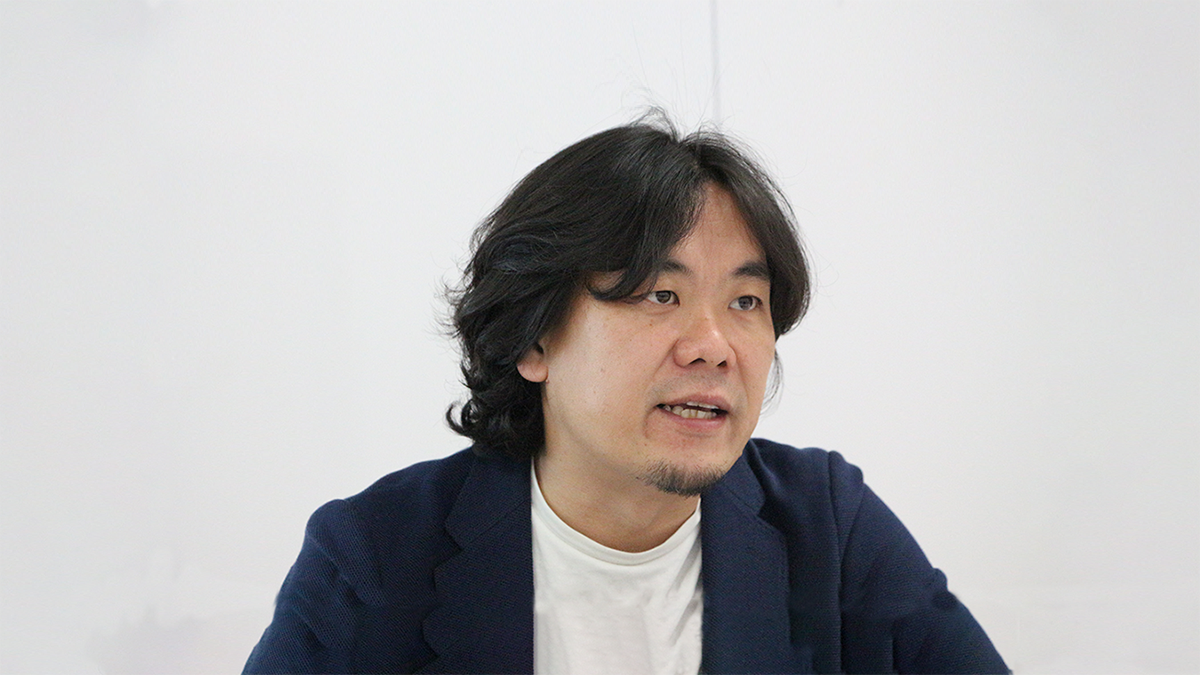 A drive to succeed

Tomoya has maintained a clear vision for his career since entering Hakuhodo in 1998. He is very appreciative of how Hakuhodo supports employees’ professional goals, affording him the opportunity to enter the University of Southern California’s graduate school of film, which counts George Lucas among its illustrious alumni.

Tomoya says it was “a passport to the next level” in the film and entertainment business, including an invaluable chance to be mentored by Steve Golin of Anonymous Content. His eyes light up as he talks about the multimedia development and production company, which won the 2016 Best Picture Oscar for Spotlight.

Informed by the business model and inspired by the creative synergy he had observed at Anonymous Content, Tomoya was determined to build a team which could produce both branded entertainment and original content, along with a collective consisting of creators from Hollywood and Asia. He founded Stories, LLC in Tokyo in 2011, partnering with legendary Japanese game developer Sega. The LA office followed in 2013 with the creation of Stories International, Inc.

His business plan was carefully considered from the outset. “We’re developing English features and TV based on Japanese intellectual properties, including our investment partner Sega’s video game. Japan’s content audience is limited due to the language gap, and so I wanted to target the international audience through the Hollywood platform. I liked the Sega brand and their Genesis platform is very familiar to Americans in their 30s—the generation who make the decisions in this business,” he points out.

Stories has a vast array of talented creators it can call upon for any given project. “First you have to identify the objective of the campaign, or the issues the client is facing. To tackle that, you then need to come up with the right strategy so you can choose the right creators,” Tomoya explains. “I think our strengths at Stories lie in being creative producers. We are filmmakers ourselves, so we can communicate with these creators in their own language.”

One major domestic success has been the “Your story with” campaign for Subaru, which won a Bronze Spikes this year. In a perfect example of Tomoya’s vision of branded entertainment as the future of advertising, the campaign metamorphized into a TV drama series and has even become a novel. 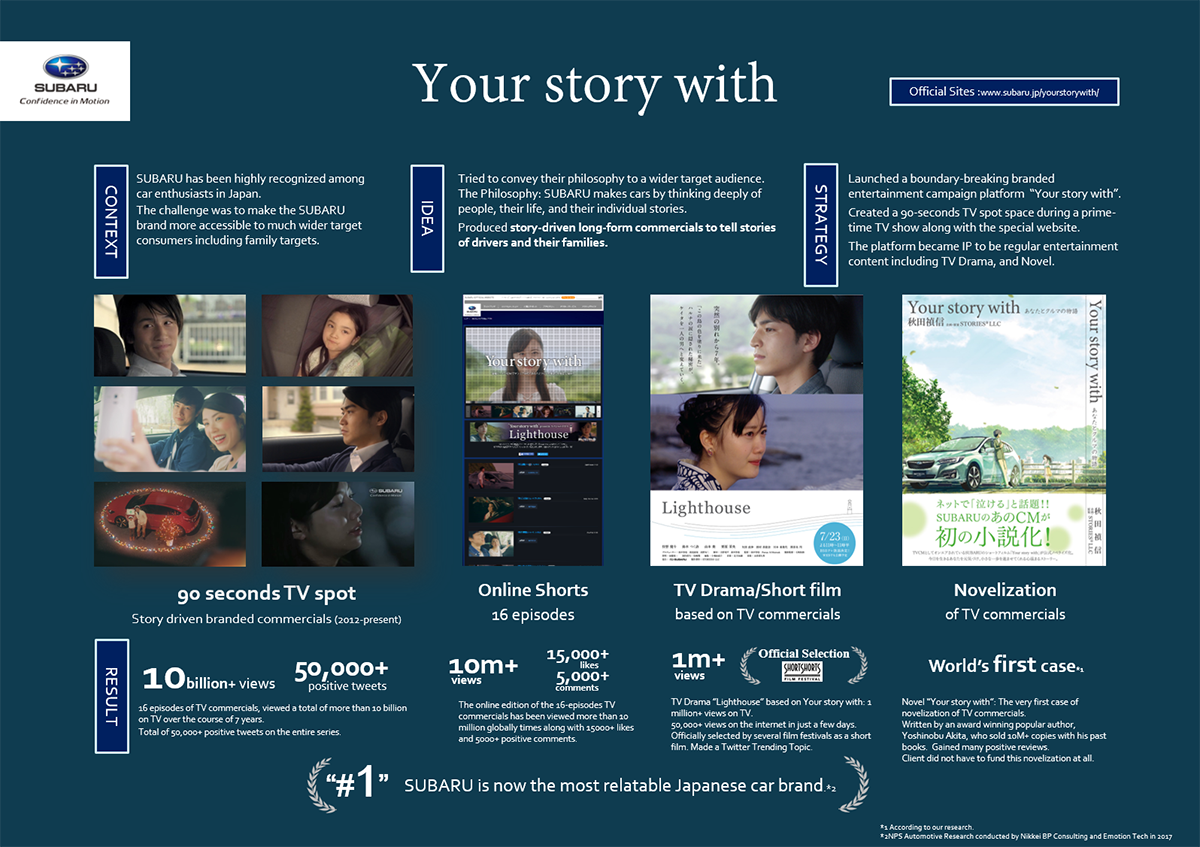 “We worked with the client to identify the most important aspect—what was the strongest point of the brand? We decided it was the philosophy behind why Subaru makes cars—which is to contribute to people’s lives.” Tomoya himself came up with the background stories for around half of the spots, basing some upon his own experience. “One is Father’s Footsteps. It’s about a boy growing up, and not getting on with his dad, and then he leaves home. I grew up in Aichi Prefecture and came to university in Tokyo.” His expression becomes momentarily wistful.

Beginning in 2011, the campaign was so successful that Subaru asked Tomoya’s team to expand the original 30 second spots into 90 seconds, which then lead to three 30-minute TV dramas on BS Nippon TV, a nationwide TV network. “We had to expand the content to 26-minute timeframes, while endeavoring to keep the essence of the 90-second spots, where the car plays a very important role,” he says.

As for the novelization, major Japanese publisher Kadokawa approached Stories about collaborating with novelist Yoshinobu Akita. Five episodes were selected from among the 90-second ads and turned into a volume of short stories, which came out in 2018.

Serving as a judge at the Cannes Lions in 2017 and Spikes Asia in 2018 were valuable opportunities for Tomoya to observe industry future trends, especially in the field of branded entertainment. “It is important to tackle the challenge—to align with some social issues, for example—and not just focus on the brand. It’s also important to keep changing. Even the best cannot rest on their past performance, and that is the beauty of the industry.” 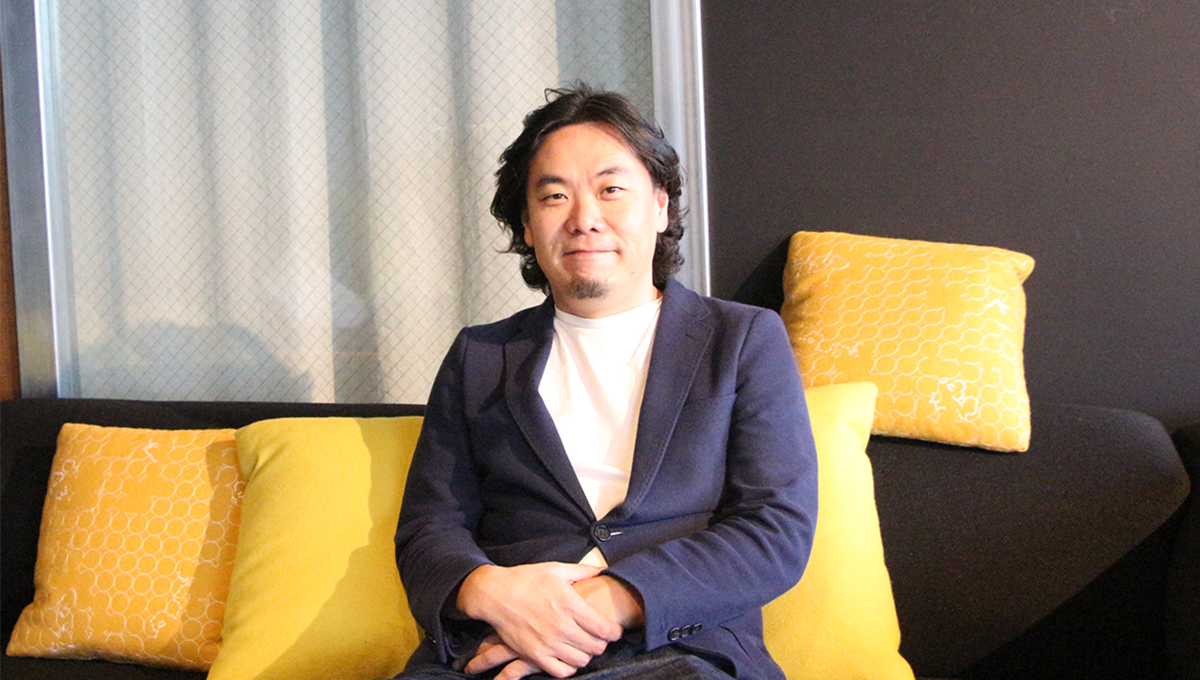 Looking ahead, Tomoya is working on several Hollywood film projects, including Shinobi with Marc Platt of La La Land fame, and Altered Beast with the producers of The Walking Dead. The recent capital increase also means more capacity to develop new projects with his staff on either side of the Pacific. “We want to be the world’s best team at producing communication projects which inspire the audience, regardless of the genre.”

He is well aware that as Stories continues to expand, so will his role as the firm’s leader. “It is a challenge for a creative person to build and grow their teams and company. I am trying to balance that out, as a player-manager. But one thing I know is that I’ll always have my finger in the creative and storytelling pie,” he says with a smile.