SDGs in Action: Creative Volunteers for the United Nations

The Hakuhodo Group is committed to doing its part toward achieving the United Nations Sustainable Development Goals (SDGs). In this interview series we introduce key initiatives undertaken by the Group featured in Creating Happiness: 2019 SDGs Collaboration Book published by the Hakuhodo DY Group.
In this first article, Kaoru Nemoto, Director of the United Nations Information Centre, Tokyo and Yuta Iguchi of Creative Division 2 at Hakuhodo Inc. discuss the collaboration between the two entities, which has so far realized more effective Japanese copy for the SDG Icons and #BeatPlasticPollution logo.

The Japanese copy for the SDG icons were co-produced in 2016 by the United Nations Information Centre, Tokyo (UNIC Tokyo), which is responsible for promoting and raising awareness of the SDGs, and Hakuhodo, in consultation with relevant UN agencies, NGOs, the business community, the Japan International Cooperation Agency (JICA) and the Ministry of Foreign Affairs of Japan, in an effort to induce action by using plain language. This was followed in 2018 by the production of the Japanese logo and statement for #BeatPlasticPollution by Hakuhodo, again in cooperation with UNIC Tokyo, to promote and raise awareness of the campaign. 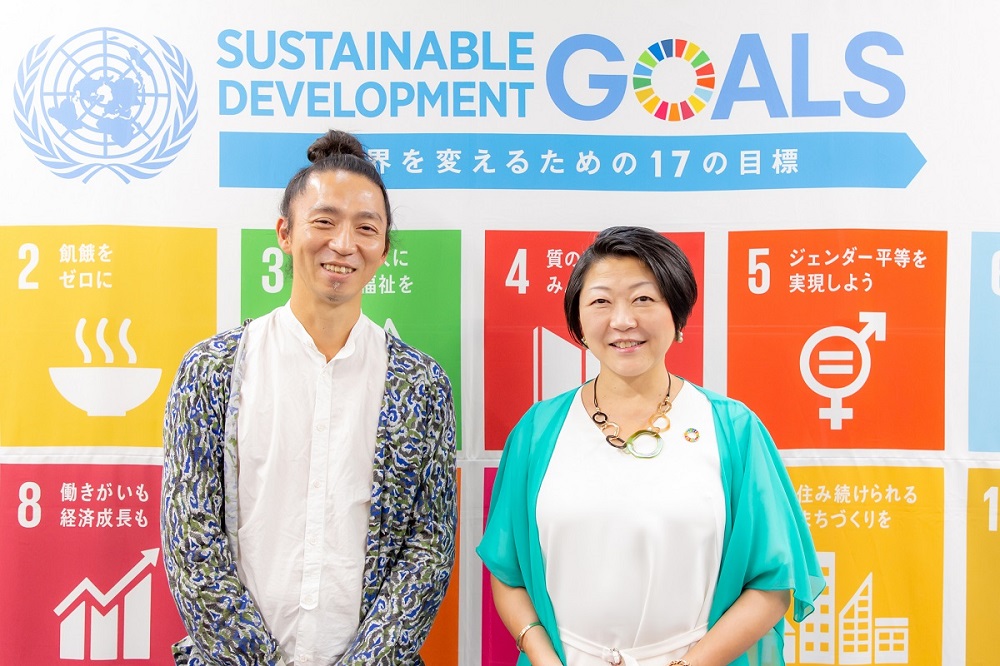 The SDGs: The world’s “vision for a better future”

― Firstly, can you tell us about the development of the Japanese SDG icons?

NEMOTO (UNIC Tokyo): As we were about to release the SDGs after their adoption in 2015, the original Japanese SDG icons were filled with mediocre, literal translations. A person from Hakuhodo noticed and told us that they wouldn’t work. That was how it all started. The SDGs are the common property of humankind, and not owned by the UN Information Centre or UN organizations alone. Working with people from Hakuhodo, we successfully completed a grand project to decide on how the SDG icons should be presented in Japanese. This was done in consultation with the public, the private sector, NGOs, and the government of Japan, one of the Member States.

― What did you think about the proposal made by Mr. Iguchi?

NEMOTO: Particularly impressive was his suggestion for SDG 12. The original English, “Responsible Consumption and Production” became Tsukuru sekinin, tsukau sekinin [Producer Responsibility and User Responsibility]. Everyone on the Hakuhodo team is a communication professional, skilled at conveying complicated, confusing or rigid concepts in a simple and more accessible manner. I think the Hakuhodo team made a great contribution in this sense. 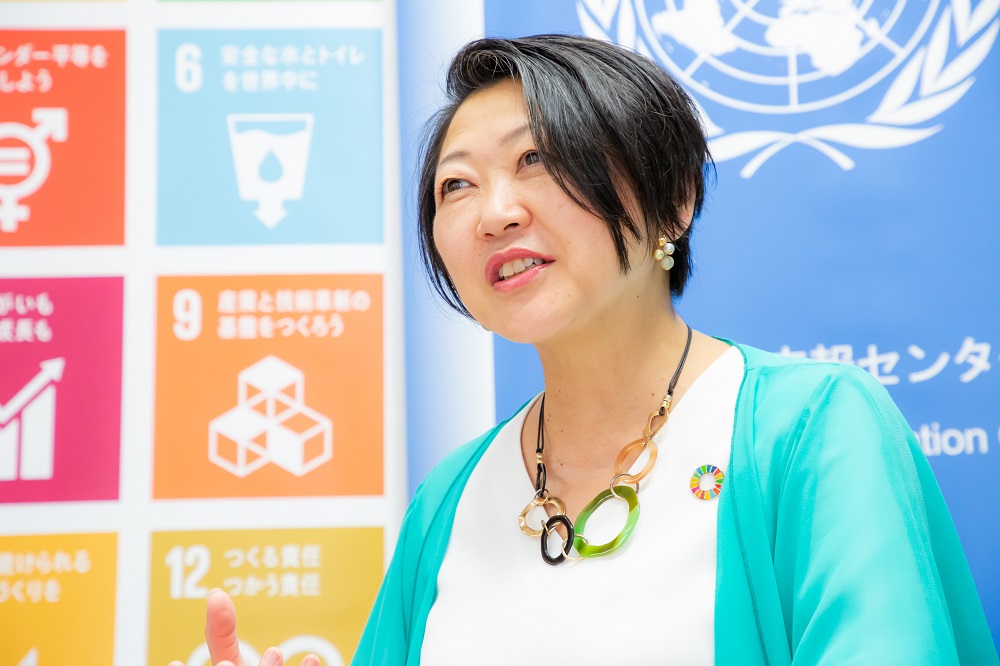 ― What kind of presentation did you make, Mr. Iguchi?

IGUCHI (Hakuhodo): The first thing I told Ms. Nemoto was that these goals had not changed much since my childhood. I found that really surprising. I thought that representing the SDGs as they were would not move people. After a while, however, I became deeply motivated because I realized that the SDGs represent the world’s “vision for a better future.”

NEMOTO: One of the first things Mr. Iguchi said to me was that the original literal translations would not help get the message across, because nobody could understand what was being asked of them. When I look at them now, the original text was just nouns strung together, without saying what it was we wanted people to do. Mr. Iguchi helped us clearly communicate the message of the goals to our audience.

Goals designed to “leave no one behind”

― Did you or UNIC Tokyo receive any feedback about the SDGs?

NEMOTO: I have spoken about the SDGs on various occasions. People often say to me: “I was deeply impressed by the principle of ‘leaving no one behind,’” and “Now I really feel that I’m part of the Global Goals.” Such opinions were particularly expressed by people with disabilities and minorities, who tend to be neglected in favor of the majority.

IGUCHI: After hearing the words “leaving no one behind,” I also felt that the United Nations is like a mother figure, looking on the world with deep affection. Just living your everyday life, it is difficult to sense the significance of the United Nations, but those words clearly reminded me that the UN plays a crucial role on behalf of our world. 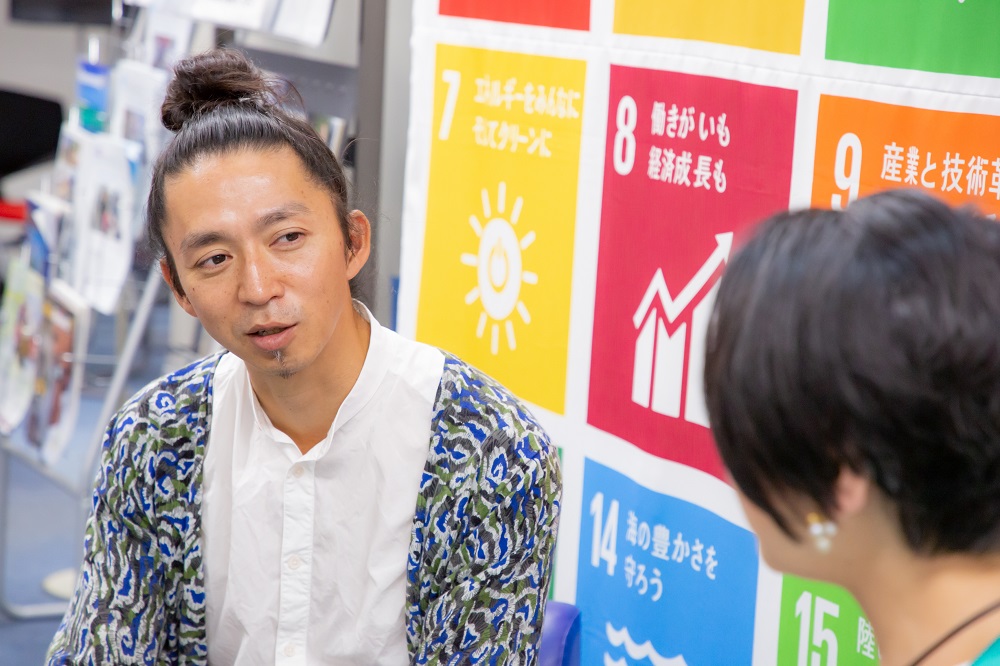 ― You also produced a video message from Tetsuko Kuroyanagi, the UNICEF Goodwill Ambassador.

NEMOTO: The G7 Ise-Shima Summit in May 2016 was the first G7 meeting after the SDGs were implemented, and the SDGs were placed on the G7 agenda for the first time. I wanted to take this great opportunity to produce and release a promotional video. So I boldly approached Ms. Kuroyanagi, in collaboration with Mr. Iguchi of course, and the video was completed just before the G7 Summit. At the end of the video, we asked Ms. Kuroyanagi to choose from among the SDGs the one goal that was most important to her. Her pick was SDG 2 “Zero Hunger.” That was because she experienced severe hunger as a child due to World War II.

IGUCHI: We simply asked her to give a direct message, without any staging. She spoke in her own words, which was so powerful and compelling.

Having “unexpected fun” addressing the SDGs

― Can you talk about the issue of plastic pollution?

NEMOTO: The Ocean Plastics Charter was adopted at the 2018 G7 Summit, but two countries did not sign it―the U.S. and Japan. That was a shock both in Japan and overseas, given that Japan is surrounded by and dependent on the sea. At about the same time, consumers started to take an interest in various movements from abroad, including the call to ban single-use plastic straws. Businesses were finally forced to act in reaction to the rising number of media reports. Against this backdrop, we decided to host a major symposium at United Nations University on World Oceans Day in June 2018, with Sakana-kun as guest speaker. The Japanese logo and statement for #BeatPlasticPollution were developed in time for the symposium. The rest is history.

Left: A huge amount of plastic waste drifting in the sea. © UNEP
Right: A “plastic beach” in Mumbai, India’s largest city, on the west coast. © UNEP

― What are your next steps?

NEMOTO: Fashion will be one of them. I was surprised to find that the apparel industry accounts for some 10 percent of global CO2 emissions. It also accounts for 20% of the contaminated water discharged worldwide. This industry is putting intense pressure on the earth. We now buy 60% more clothes than 15 years ago, but use them for only half as long. It is also reported that one billion clothing items go to waste in Japan each year. Our Fashion Challenge initiative was launched to set in motion a virtuous cycle: buying quality clothes at fair prices, wearing them for a long time, and upcycling them with added value when they are done. A simple sense of obligation will not help SDG initiatives last longer. We must try to have “unexpected fun,” which is what Hakuhodo people told us to do.

IGUCHI: We will have “unexpected fun” collaborating at your request. [Laughs] 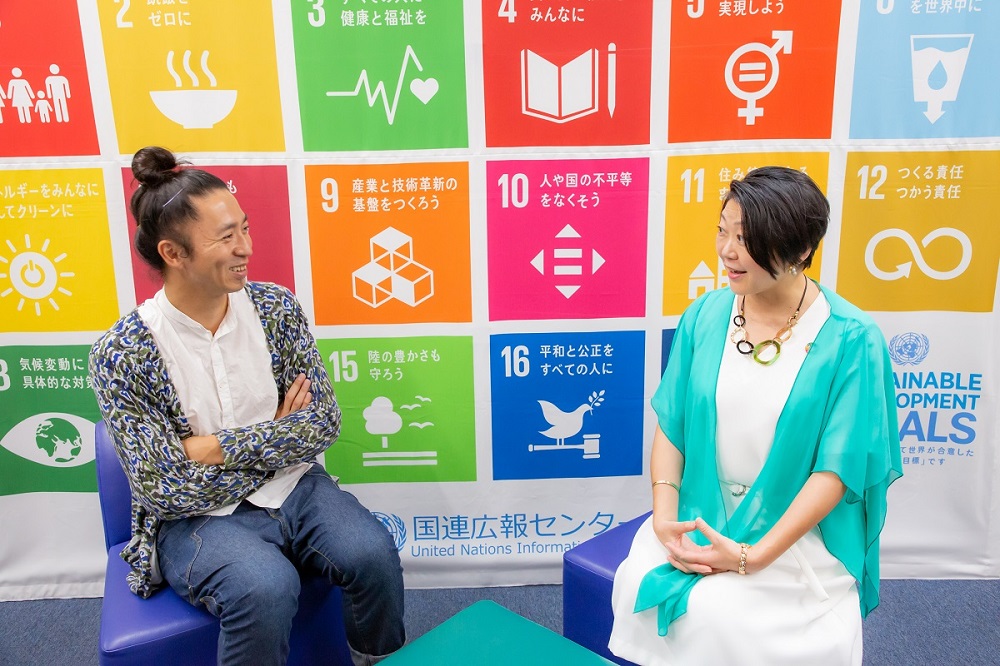