Recording with diagrams, thinking using pictures and conceptualizing with manga

My Creative Hack is a series of articles that introduces tips, practices, techniques and know-how that our experts use every day in their work to come up with new ideas, pinpoint the best ones, foster team work, etc. Our second writer, Hakuhodo Executive Creative Director Kazuhiro Suda, discusses his whiteboard-based drawing thinking method. 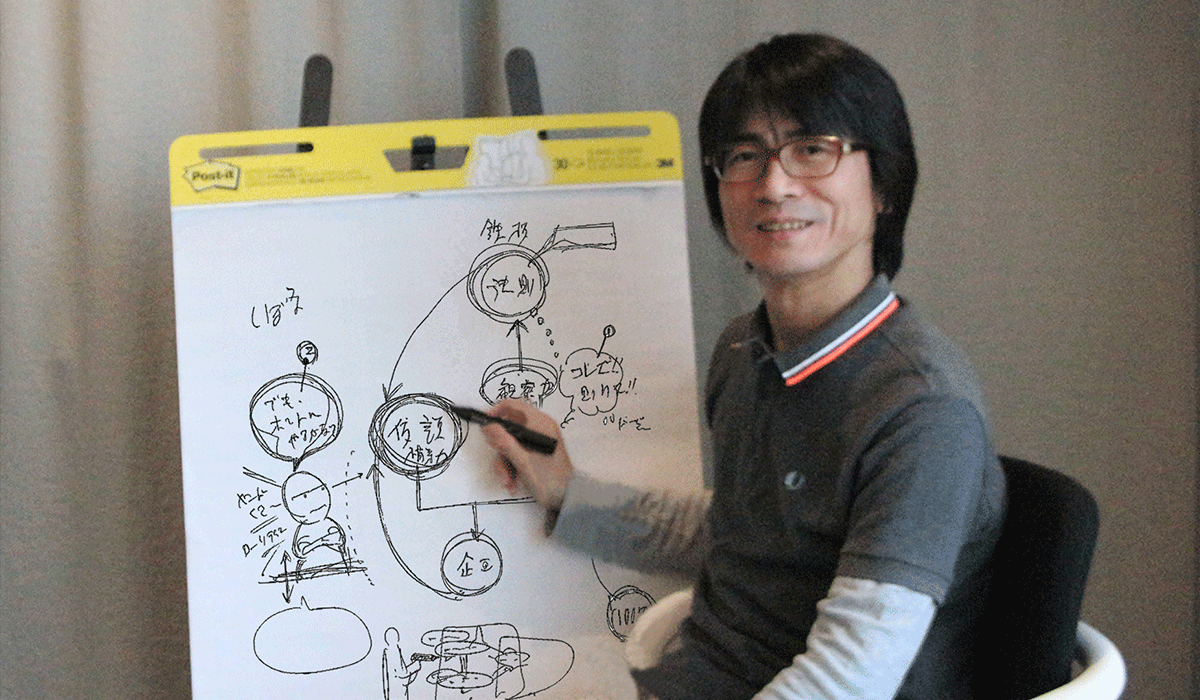 When I listen to others speaking during a briefing, presentation or interview, or head up a meeting about a proposal, I take notetaking to the nth degree. The reason is that I feel like nothing will remain if I don’t take it all down. Nothing will be left over if I just talk or listen. The human memory can’t be relied upon. Only what is written down will remain. So, I just write the whole lot down.

But if I tried to write down everything I heard or said word for word, there’s no way I’d be able to keep up with the speed of speech or thinking. So instead I use diagrams, pictures and keywords to get everything down quickly and accurately. I draw diagrams to organize what’s being said structurally and, using pictures, I summarize the target customer, how the plan might be implemented, etc. with concrete images in an easy to understand manga. Then, using keywords, I carefully and accurately identify what others said and my own ideas in short words so as not to miss the nuances of the important details.

I think of memos as the monitor of my own brain. Without a monitor, we humans cannot know what a computer is doing. In the same way, no one will know what we are thinking if we don’t write it down in a visible way. In fact, even the person supposedly doing the thinking won’t know. That’s why I constantly write and draw when I’m thinking and always make sure to write things down when I’m listening to others. Writing things down in real time is more important than whether you will look at the memo again later or not.

Drawing diagrams and pictures gets the message across faster

Furthermore, whiteboards in meeting rooms could be called monitors for what is being discussed during a meeting. Having everyone fixing their eyes on the same panel, it’s possible to focus the meeting’s attention, and jotting down the key points of what participants have said keeps ideas that come out of brainstorming sessions from disappearing like mist. In my opinion, the creative director (CD) should serve as the facilitator at idea meetings and wield the whiteboard pen. If the CD acts as facilitator, he or she can edit and structure the ideas with participants visually in real time.

When doing so, the key is to avoid words as much as possible in favor of pictures and diagrams. Reading takes time and devotes the brain’s understanding processing power to reading text. This is counterproductive. If it is to be evidence of a meeting, the whiteboard needs to be a tool for enlivening the meeting. Drawing diagrams instead of writing words enables overall understanding of the make-up of the discussion and the free association of ideas.

Here are some examples of my notes for Talkable Vegetables. I took these notes at a meeting where we were preparing to exhibit Talkable Vegetables, one of Suda Lab’s key works, at South by the South by Southwest Conference and Festivals (SXSW) in the US. 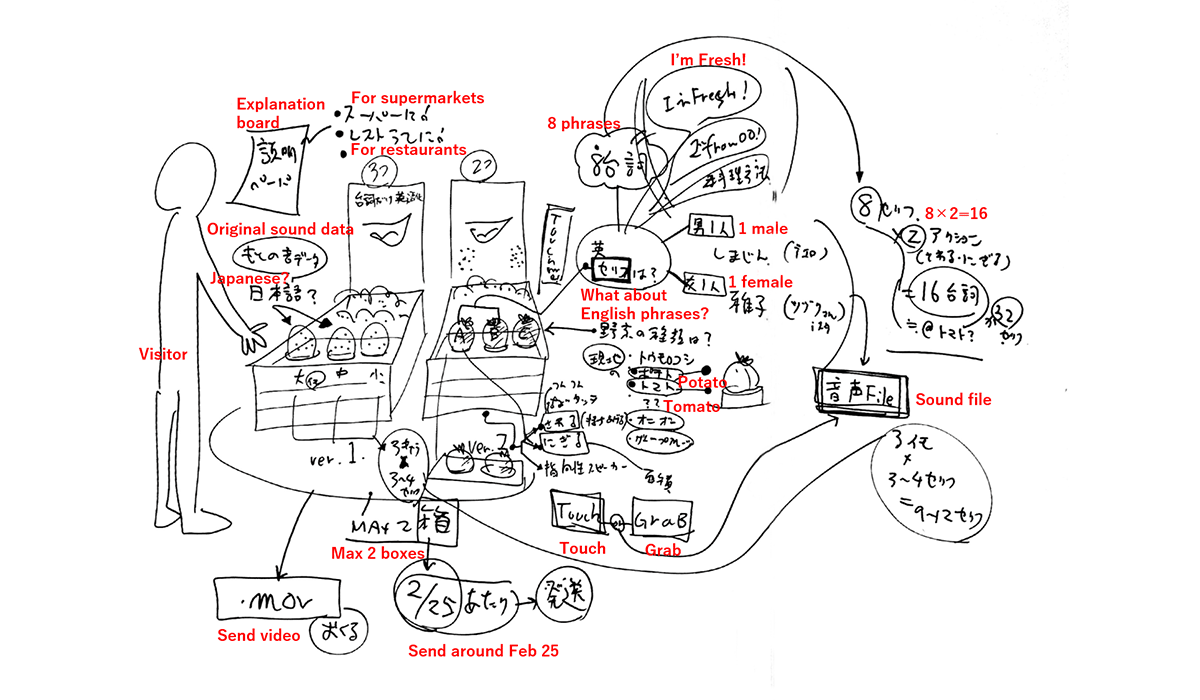 Two actual Talkable Vegetables devices were going to be displayed in the Hakuhodo Booth at SXSW. First, I drew a picture so I would know at a glance the plan for placing the vegetables on each device, where visitors would be and the size of the boxes. I realized that we would need an explanation in visitors’ line of sight, so I wrote “For supermarkets” and “For restaurants” there as recommended uses. For the choice of vegetables, we considered potatoes and tomatoes, etc., which are available in Texas, where SXSW is held.

Also, since the original Talkable Vegetables sound data was in Japanese, I jotted down that we would need English versions for exhibiting in SXSW and wrote down eight phrases, including examples like “I’m fresh!” and “I’m from XYZ.” I wrote down that one male and one female staffer would record the voices and create audio files.

Also, I wrote that during the meeting we discussed with tech staff that if we were going to change the sound depending on whether the vegetables were touched or grabbed, we would need 8×2=16 phrases.

This is a picture of the actual exhibit at SXSW that came out of this meeting. 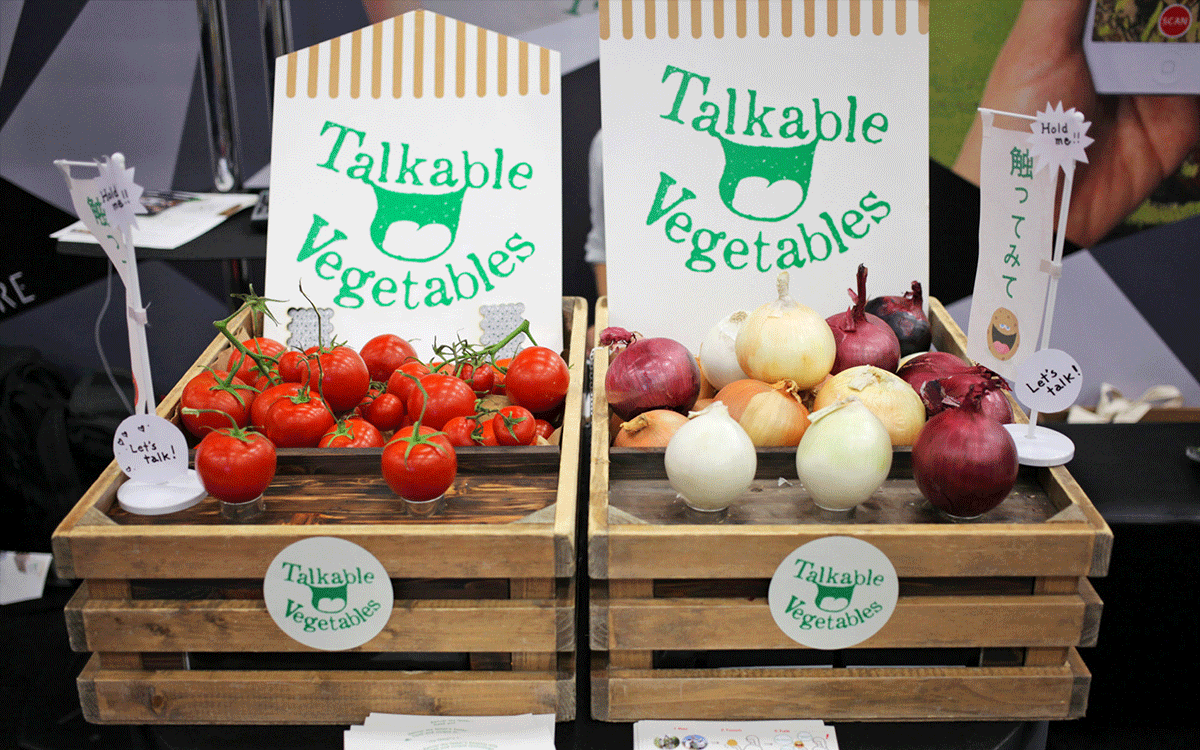 The important thing at meetings is to just draw pictures. By drawing pictures, you can think concretely about the target user’s situation and consider what you yourself are making in a real way. This makes the important points and weaknesses of implementing the plan clear, while also enabling meeting participants to come up with ideas more proactively. Then, with the CD once again deciding whether to keep or discard team members’ suggestions and adding the key points to the whiteboard, ideas can be built up in a way that’s visible to everyone in the room.

Since I was a kid, I have loved reading Doraemon, the famous Japanese manga about a robot cat from the future. I was in the first grade of elementary school when the first comic book in the series came out. I avidly read Doraemon time and time again as an elementary student and this, I believe, became the foundation of my ideas.

In the manga, Doraemon’s human friend, Nobita, constantly gets into scrapes that Doraemon “solves” using an endless supply of gadgets he keeps in his pocket. The punchline is that unexpected developments and consequences always ensue after Nobita makes some very human mistake. When looked at this way, my work today is basically the same. Doraemon author Fujiko F. Fujio took inspiration for the Doraemon stories from the great works of classical Rakugo, Japan’s comedic storytelling. These depict the lovable meaninglessness of human nature, which is today just as it was in the Edo period (1603–1868).

Whenever I give lectures, I like to introduce my own case studies with the words “Media evolve. People don’t.” Hakuhodo has Sei-katsu-sha Insight as its philosophy. This people-centered way of thinking sees people in their entirety and not simply as “consumers.”

So how can we implement this thinking in our everyday planning meetings? One method and the easiest way is to draw manga on the meeting room whiteboard. It’s not necessary to draw in the comic style. Just draw whatever rough sketches you can. The important thing is to draw with pictures. Draw pictures that can enhance visualization in concrete terms and convey sei-katsu-sha’s (users’) emotions, then think and discuss.

This method is in line with Japanese tradition and a trick for making work fun. Anyone can learn how to structurize their thinking and draw rough sketches of ideas if they keep training themselves to draw.

Would you like to expand your planning capabilities? At Hakuhodo, we are trained in this method while doing our everyday work. Come and join us! 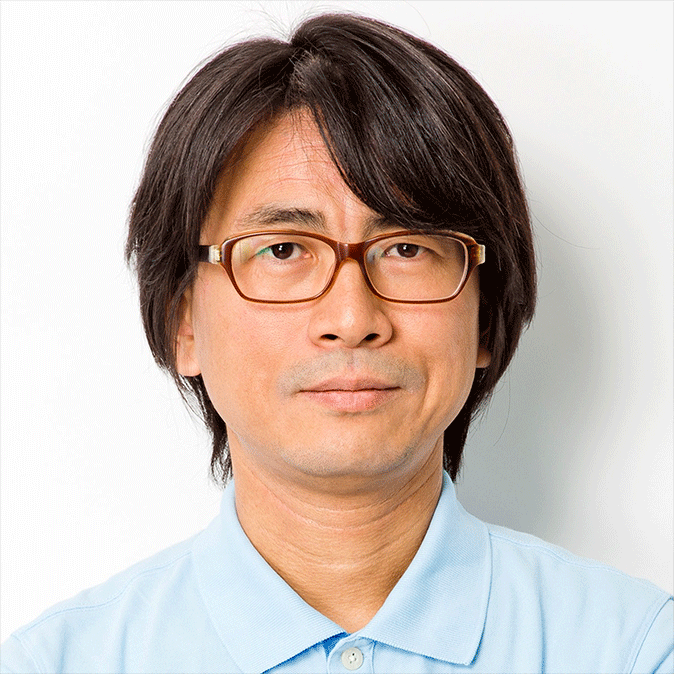 Kazuhiro Suda
Executive Creative Director
Suda Lab
Following stints as Art Director and Commercial Planner, Kazuhiro Suda entered the interactive arena in 2005. He established the creative lab Suda Lab in 2014. Talkable Vegetables and Rice Code, the Lab’s first two works, won over 70 Japanese and international advertising awards, including a Grande at ADFEST, and Gold at Cannes International Festival of Creativity. Suda was President of the Interactive Jury at the ACC Tokyo Creativity Awards in 2016 and 2017. He is the author of Ads You Can Use.
SHARE
Back to News & Insights