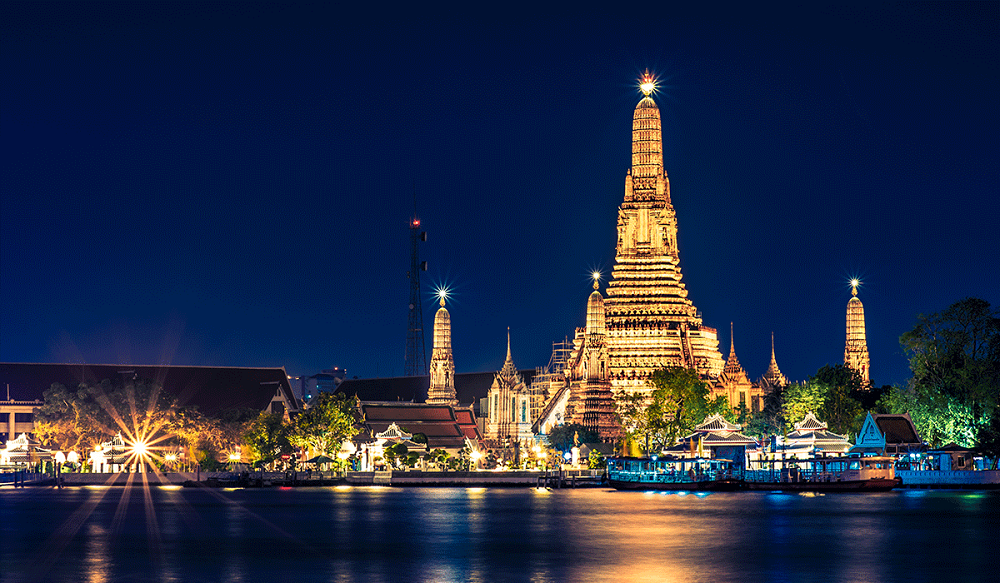 Thailand is excited about innovation

MAIKA KOBAYASHI, HAKUHODO DY MEDIA PARTNERS INSTITUTE OF MEDIA ENVIRONMENT
Dee, Ms. Ito, thank you for your time. Today, I would like to ask you about the degree of interest in the “55 Services That Will Change People’s Lives” that you asked respondents in each country about in Media Innovation Survey 2018 (Fig.1).

Could you tell us what you thought when you looked at the data as a whole, and if you agree or disagree with the results?

■ Figure 1: 55 Services That Will Change People’s Lives: Top 10 services in each country by degree of interest 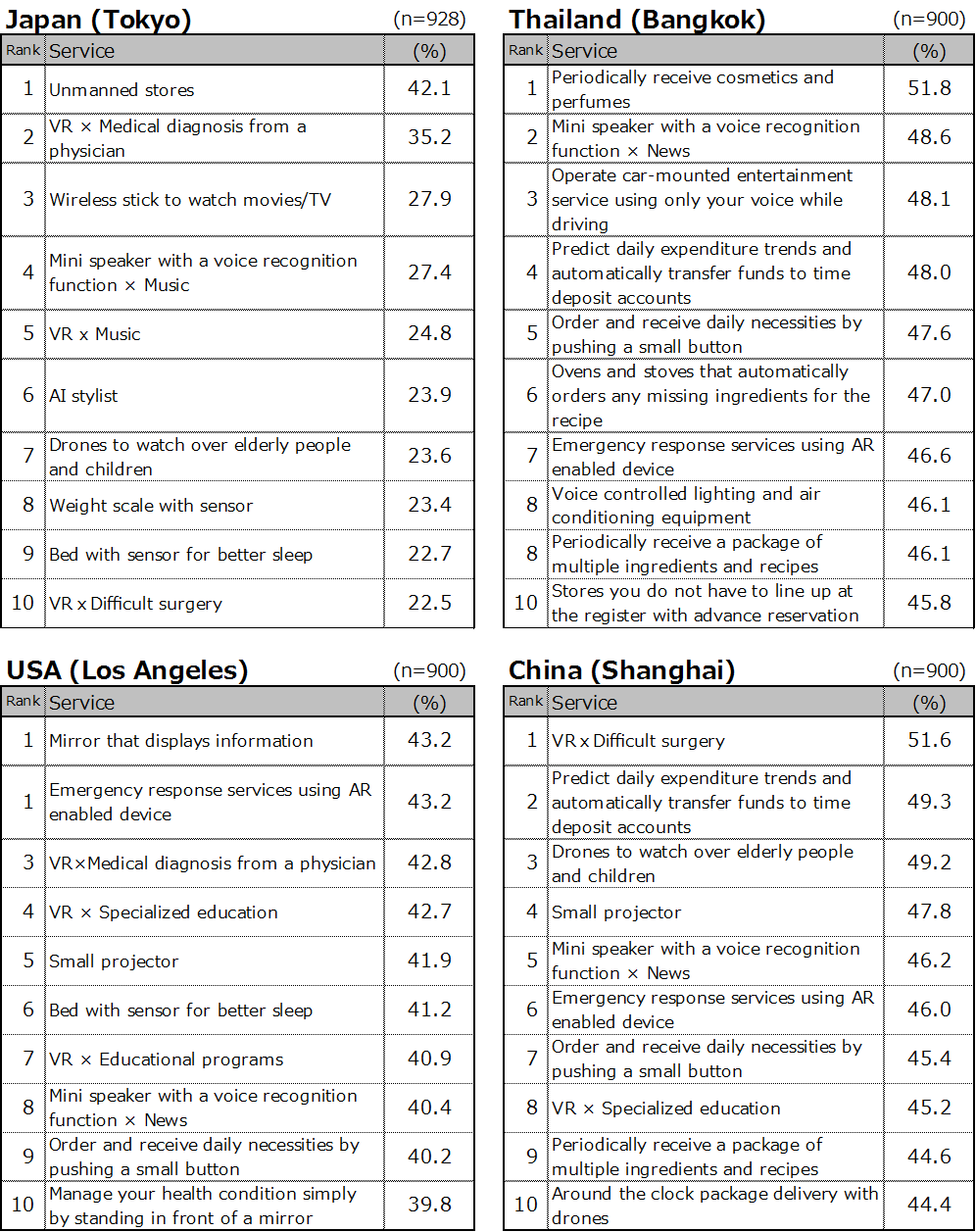 PROMPOHN SUPATARAVANICH (DEE), HILL ASEAN
When I saw the data on Thailand, I thought it was spot on. There were no items that I thought were off.

KOBAYASHI
A feature in Thailand is the high level of interest in the new services. If you add up the “Interested” percentages for all services, the total score for Thailand is 2,402.2, the highest of the four countries (Fig. 2). The average per service is 43.7. Why are scores for Thailand so high compared to the other three countries? The total for Japan, conversely, is 981.4, less than half the US level, and only about 40% the level of Thailand and China. The average per service is 17.8, which is extremely low. If you have a hypothesis, please tell us why interest is so low in Japan compared to Thailand.

DEE
Firstly, regarding the high degree of Thailand’s interest. Among the four countries, Thailand is the most developing country. Compared to the other countries, it is the least developed in terms of technology and innovation, so I think people are really excited about all of the technologies.

Our research shows that aside from Singapore, the most advanced ASEAN country, Thailand, Malaysia, Indonesia and other ASEAN countries tend to give all technologies high scores. I think the reason is that there are fewer new technologies in these markets.

YUKO ITO, HILL ASEAN
The difference between the reactions to future technologies in Japan and Thailand is that people in Japan tend to have doubts about safety, such as whether the payoff for the convenience is the collection of their data. Conversely, people in Thailand seem to have a strong ability to jump at and accept new things, which I think makes it easy for them to rate them as “convenient and fun! Interesting and good.”

Thai people like new things other than technology, too. When a new store or service launches, people will flock to it in droves almost immediately, but they also tend to tire of it quickly and look for the next service right away. Certainly, there are differences in national character: we have conducted various quantitative surveys to measure acceptance of various products and services previously and compared to data for Japan, purchase intention has tended to be very high. However, as to whether products actually sell as well as the data would indicate, they don’t; it’s just that respondents tend to give positive ratings in questionnaires.

KOBAYASHI
Is there a difference in what people associate with “new services” between people in developed countries like Japan and Singapore and people in Thailand, Malaysia, Indonesia, and other countries?

DEE
According to HILL ASEAN survey results, I feel that Singaporeans and Japanese think the same way. Among the 55 new innovations, respondents in both counties rated unmanned stores and other things that enable them to carry out transactions without dealing with a human highly. This may be because of the high cost of labor in those countries. Our Media Innovation Survey produced the same results, but interest in unmanned stores was low in Thailand.

KOBAYASHI
That’s right. The fact that Unmanned stores ranked No. 1 in Japan and dead last in Thailand at No. 55 is emblematic of this (Fig. 3).

■ Figure 3: Interest in unmanned stores in each country

ITO
I think that services that are already available in Japan and Singapore are still a bit further in the future for Thailand and Indonesia, that is, something that would be fun if they were available. Take smart speakers, which in ASEAN countries are not compatible with the Thai and Indonesian languages. Those that can speak English may buy smart speakers from abroad, but as they are not yet sold domestically, for most, they are something that would be convenient if available. This difference may be reflected in the difference in scores.

KOBAYASHI
They haven’t used one yet, so they can’t doubt them, right?

ITO
I think Thais in general aren’t very skeptical. You sense that many are positive and willing to give something a go without feeling uncomfortable or scared before using it.

Is the sense of “privacy” different between Japan and Thailand?

KOBAYASHI
There are some Japanese people who feel very anxious about being connected to the Internet at all times (Fig. 4). What about Thai people? Do they also think positively about this?

■ Figure 4: Views on connecting various devices and home appliances to the Internet in each country

DEE
I don’t think Thai people are too anxious. Thai people freely share on social media not only what they themselves are doing and where they are, but where their families and children are. Some even share the exterior of their homes and their telephone numbers, and this is perfectly normal.

I think that having used the Internet for many years, people in developed countries have come to consider privacy and security issues, but I think communicating by sharing a lot is more important for people in developing countries. Conversely, I was wondering why people in Japan are so anxious.

KOBAYASHI
I understand that location information and photographs of children are posted a lot. Does this not lead to crimes such as kidnapping?

DEE
It has. The media warns parents to be careful and not share location information, but they can’t beat Thai peoples’ desire to share. Compared to Japan and other countries, a lot more parents share their kids’ information publicly on social media accounts and pages, inviting people to follow their kids because they’re so cute.

ITO
I think that views on privacy and privacy literacy tend to differ between Thailand and Japan and the West.

KOBAYASHI
Incidentally, are there surveillance cameras in cities in Thailand?

DEE
Yes. The presence of surveillance cameras gives a sense of security that people are being protected. Even if something happens, there will be proof…

When I asked a Chinese acquaintance the other day whether they feel safe with so many surveillance cameras in Chinese cities or if they feel like they are always being watched, they replied, “I feel more secure with more cameras and have a high sense of security.”

If you ask a Japanese person, I think they’d give the opposite answer, but I think Thai people feel a somewhat similar sense of security to Chinese people. Perhaps safety is a higher priority than privacy because the general level of security is still not very high in the country.

ITO
About views on safety and security, these are already guaranteed in Japan and the West, so the cameras go above and beyond what is needed for peace of mind and may therefore feel more like “surveillance.” When we conducted home-visit surveys in not just Thailand but around ASEAN, ordinary households had multiple surveillance cameras installed (to prevent burglary) and I got the impression that there were more households with surveillance cameras installed and that there were more cameras per household than you would find with ordinary Japanese households. High-income individuals in ASEAN hire their own guards and upper-class neighborhoods have gates and guards between each area. I think that in ASEAN, people are looking for surveillance and security guarantees to prevent crime. 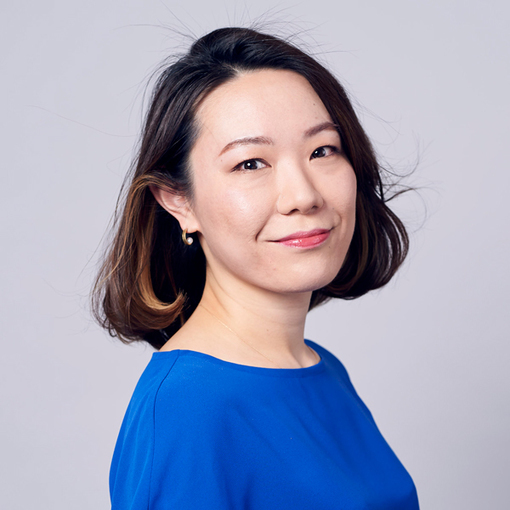 Yuko Ito
Regional Strategic Planning Director, Hakuhodo Institute of Life and Living ASEAN
Yuko Ito joined Hakuhodo in 2003. As a marketing planner, she was responsible for clients from a wide range of industries, including toiletries, automobiles, beverages, foodstuffs, and education. In addition to designing communication based on insights discovered by studying sei-katsu-sha deeply, she also carried out numerous jobs utilizing data management platforms. In addition, she was instrumental in establishing an in-house think tank dedicated to studying working women, Career Woman Lab, which provides knowledge on marketing to women both internally and externally. She has been in her current position since April 2018. 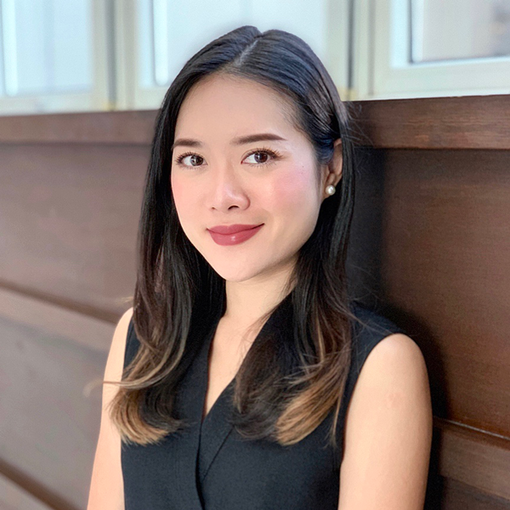 Prompohn Supataravanich (Dee)
Senior Strategic Planning Supervisor, Hakuhodo Institute of Life and Living ASEAN
Prompohn Supataravanich graduated from Ritsumeikan Asia Pacific University. Making use of her Thai, Japanese, and English language skills, after graduating from university she worked in Japan and at a Japanese company’s office in Thailand. She joined Hakuhodo Group company PRODUCTS (BANGKOK) in 2014. She has been in her current position since 2017, engaging in brand marketing and data-driven marketing for toiletries, automobiles, cosmetics, and other products. 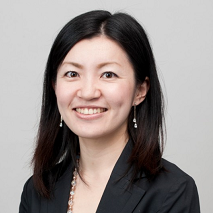