Hakuhodo Institute of Life and Living has conducted a survey of Japanese children, asking almost the same questions, every 10 years from 1997. The survey, which targets children in their low teens (aged 10–14), this time targeted children born from 2003 to 2007. For the most recent survey, we conducted analysis comparing data from each decade of the last 20 years.
How have Japanese children’s perceptions changed in the last 20 years?

Overview
In the last 20 years, the macro environment facing Japanese children has changed in many ways, including acceleration of the birthrate decline, increase in households where both parents work, and increased study loads at school, amongst other changes. But many things are unchanged from 20 years ago, too.
We observed significant changes in perceptions and behavior related to interpersonal relationships, spending, and information as a result of closer relationships between parents and kids, and advances in the digital environment.
Today’s Japanese kids have grown up thinking that access to free information, music, videos, games and other content via the net is perfectly normal. Using the net as an extension of their real-world communications, and accessing content regardless of whether it is new or old, they have developed a new style markedly different from that of the adult generation.

Firstly, let’s have a look at Japan today, a country that is said to be a society with a declining birthrate.

According to a 2015 government survey, Japan’s population stands at 127.11 million people. At 15.9 million, the youth population aged 0–14 accounts for 12.5% of the entire population, or one in every eight people. This means that whereas the population as a whole has increased by 2 million compared to around 20 years ago, the number of children has dropped by 4 million. The proportion of the population accounted for by kids has plunged. 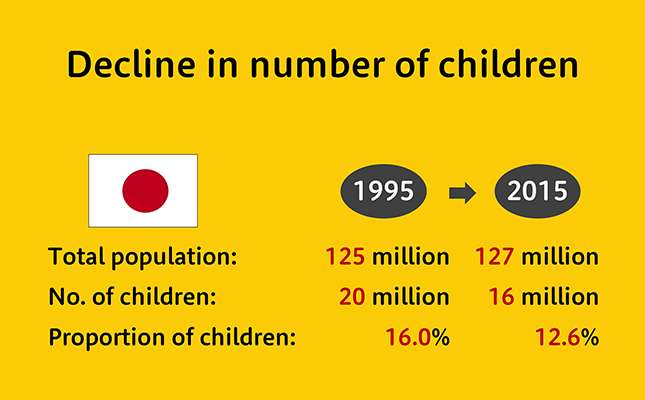 As for the generation that’s increasing, that is the aged. Japan is not only a super-aged society, it is also a society with a declining birthrate. 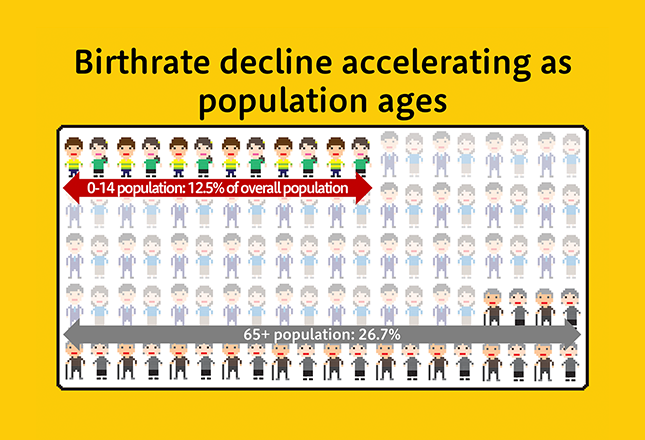 Since olden times, Japanese people have said that, surprisingly, children don’t change with the times. The idea is that since children are still under the protection of their parents, and being immature in both mind and body, they don’t differ fundamentally from era to era.

But, of course, they have changed in some ways. Today we will look at survey findings on perceptions and behaviors related to Interpersonal relationships, Spending and Information, areas in which change has been greatest.

In terms of personality, scores for “I think I’m kind” and “I think I’m polite” rose in 2017. In the past decade Japanese children seem to have become mellower. 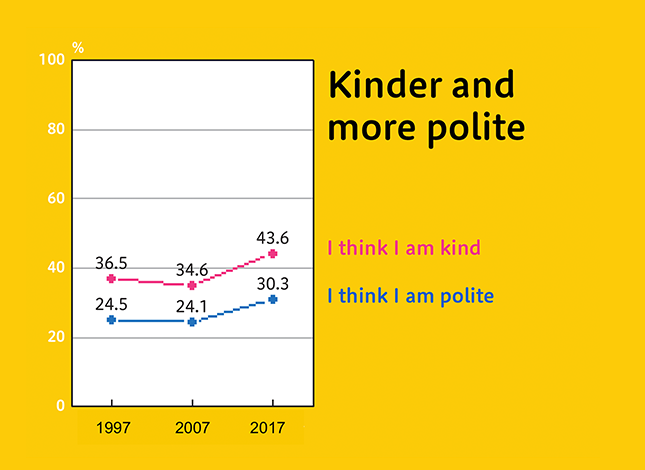 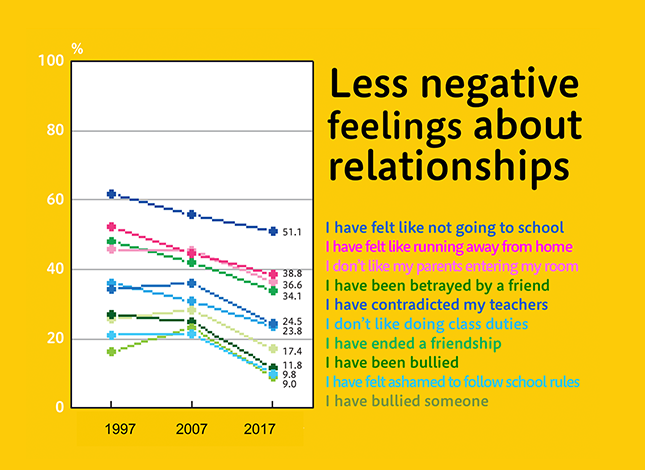 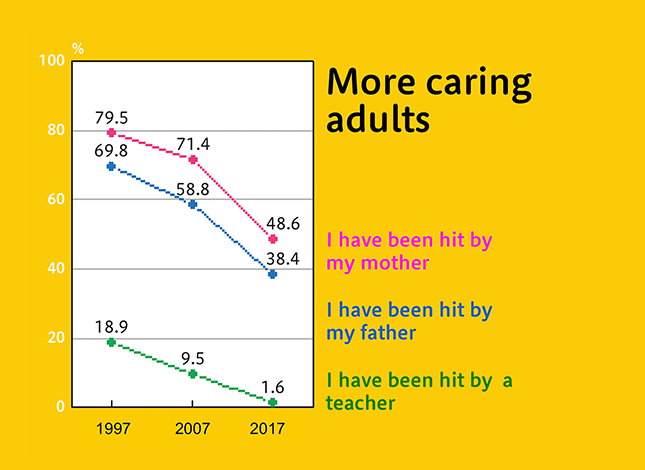 The parent-child relationship has become very close. Over 90% of children receive presents from their family on their birthdays. Scores for “My parents spend time listening to me” and “I often go shopping with my mom” are also at their highest level ever. Over 60% of children give presents to their parents on their birthdays, too. It would appear that the number of kids living peaceful lives surrounded by kind parents and teachers is on the rise. 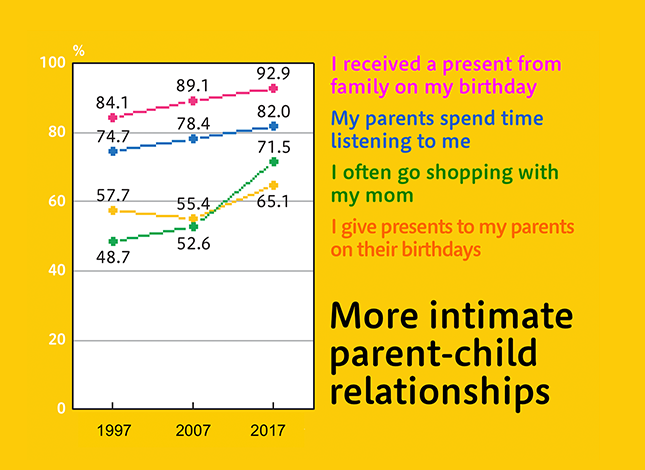 Children who “I try not to waste money” have been increasing gradually, and this score has never been higher. Meanwhile, scores for “I want to buy new products as soon as they come out” and “I want to buy better products even if they are more expensive” are at all-time lows. It appears that Japanese children are losing their desire to buy things. 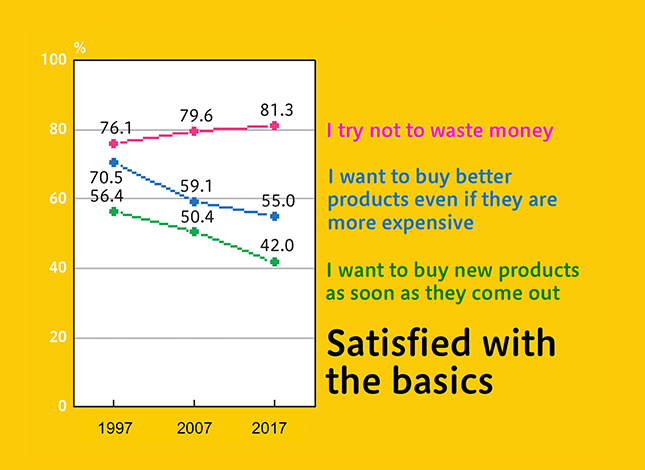 Less than half of children now receive an allowance every month, so the number of children receiving an allowance has dropped. There’s a reason for this: instead of giving them an allowance, more parents just buy their children what they want when they need it. And it’s not just parents doing the buying; some grandfathers and grandmothers do, too. 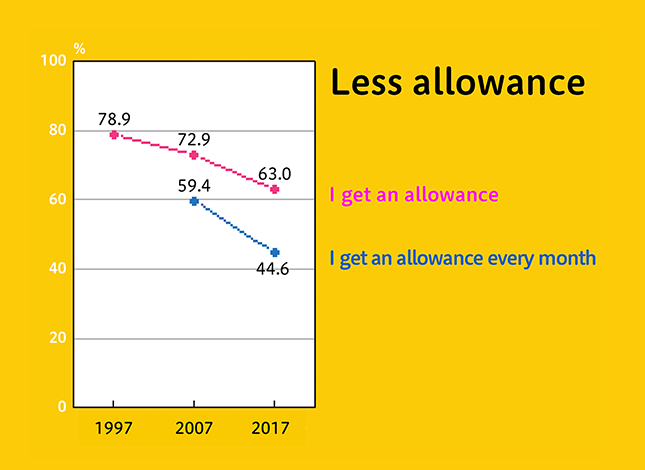 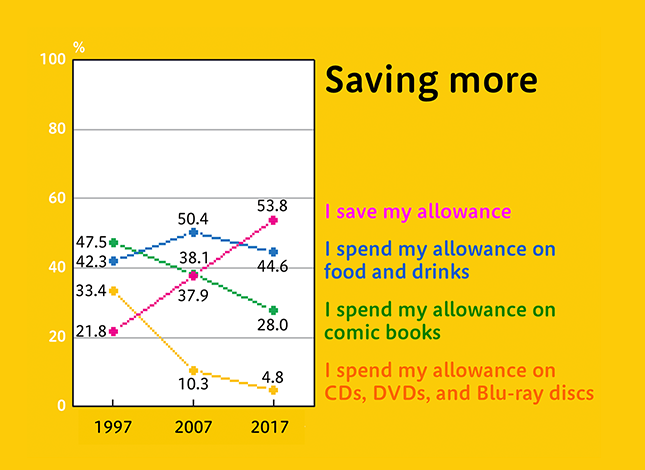 Scores for “I’m happy with my everyday life,” “I feel like I’m happy,” “I feel like I have a nice life,” and “I live luxuriously” are all at their highest levels ever. Today’s kids seem to be very happy with their current status.

Of the three sets of findings we examined, perceptions and behaviors toward information changed the most markedly, and the main reason is the advent of smart devices.

Looking at kids’ use of devices, we can see that they connect to the internet from multiple devices besides smartphones. In device usage, Smartphones are No. 1, at 56%. This includes using a parent’s smartphone. The next most commonly used devices are portable game consoles, with computers and tablets also scoring around the same. Also, around 16% of children use a net-enabled TV. Only 6% of kids don’t use the internet at home. Adding up these percentages, the average is close to two devices per child. In other words, the number of kids able to use multiple devices is on the rise. 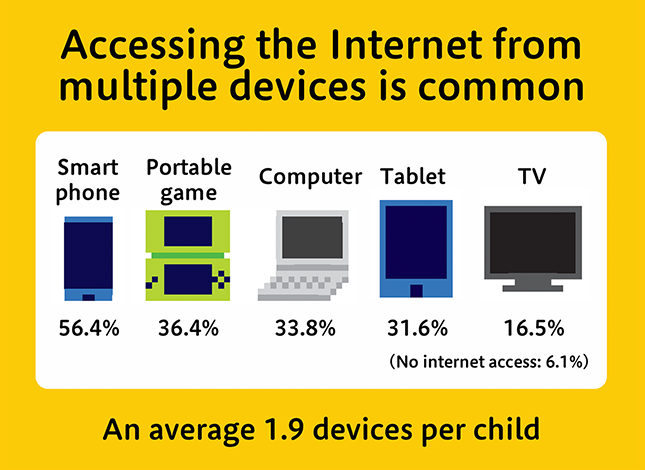 Changes to devices have also brought changes to perceptions about information. Scores for “I’m interested in following trends,” “I want to know about trends before others” and “I want to know more about trends than others” are lower than ever before. With the abundance of information on the net, it seems that fewer kids feel the need to go out of their way to look for and follow trends. They can receive recommendations without proactively searching for them themselves. 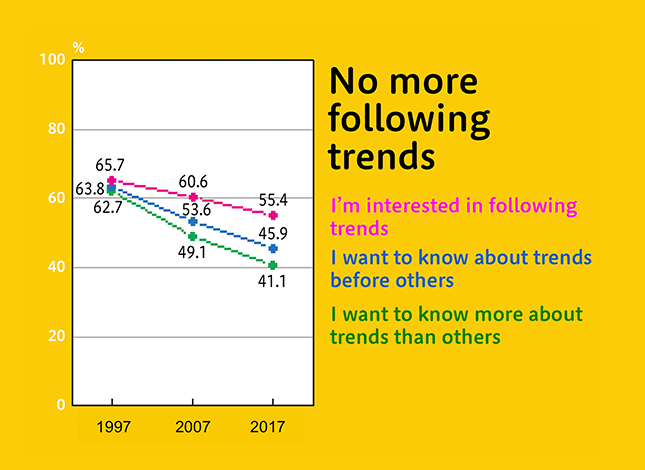 One reason Japanese children are not so interested in buying things and following trends is the environment where adults buy them whatever they want. But more significant is that there are plenty of games, music and comics that they can enjoy online for free via a smart device, and they are satisfied with these. 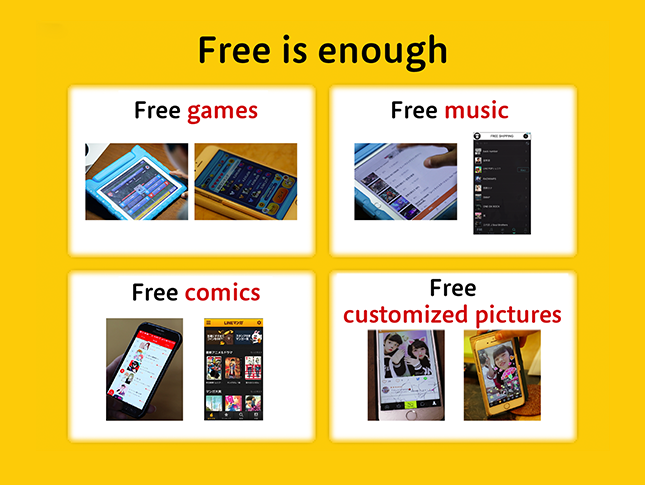 So far we have looked at changes in Japanese children over the last 20 years and what we’ve found is a generation that has had access to smart devices since they were born and views enjoying information and content for free anytime they want as perfectly normal.