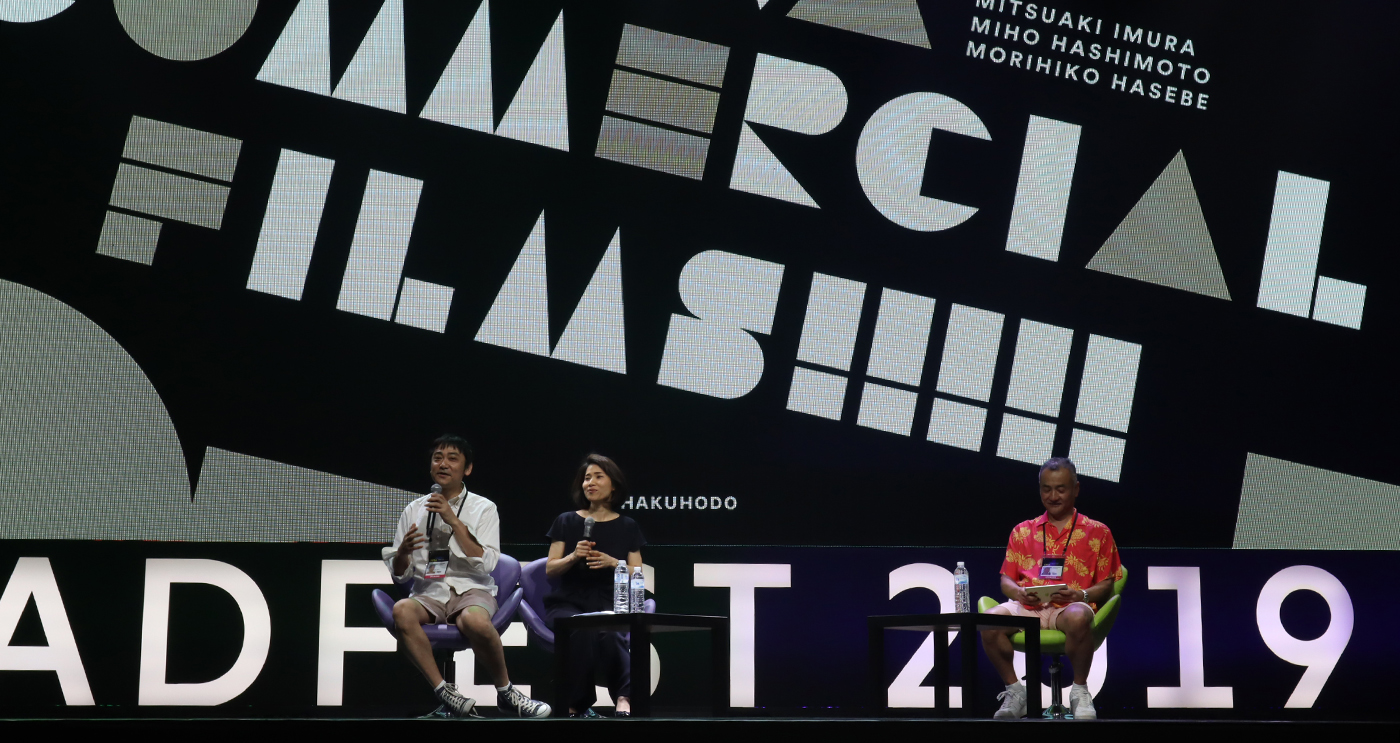 Held in Pattaya, Thailand, this year’s ADFEST was bigger and better than ever, providing an opportunity for Asia’s creative talents to network and learn about each other’s work. The Hakuhodo seminar on March 22 was the first time the company has offered such an event with the featured speaker conversing only in Japanese. Language was no barrier, however, as a leading simultaneous interpreter was among the trio of participants.

The featured speaker was Mitsuaki Imura, Creative Director of Hakuhodo Inc. in Tokyo. His Sakeru Gummy vs. Looong Sakeru Gummy campaign won a Bronze at ADEFEST 2019 and a Silver at Cannes Lions 2018. Imura drew on his experience and expertise to talk about why good filmmaking is more critical than ever in this digital/data creative age.

The session was moderated by Imura’s colleague, Tokyo-based Executive Creative Director Morihiko Hasebe. The third member of the panel was interpreter Miho Hashimoto, who served as Imura’s “voice” in English for the seminar. 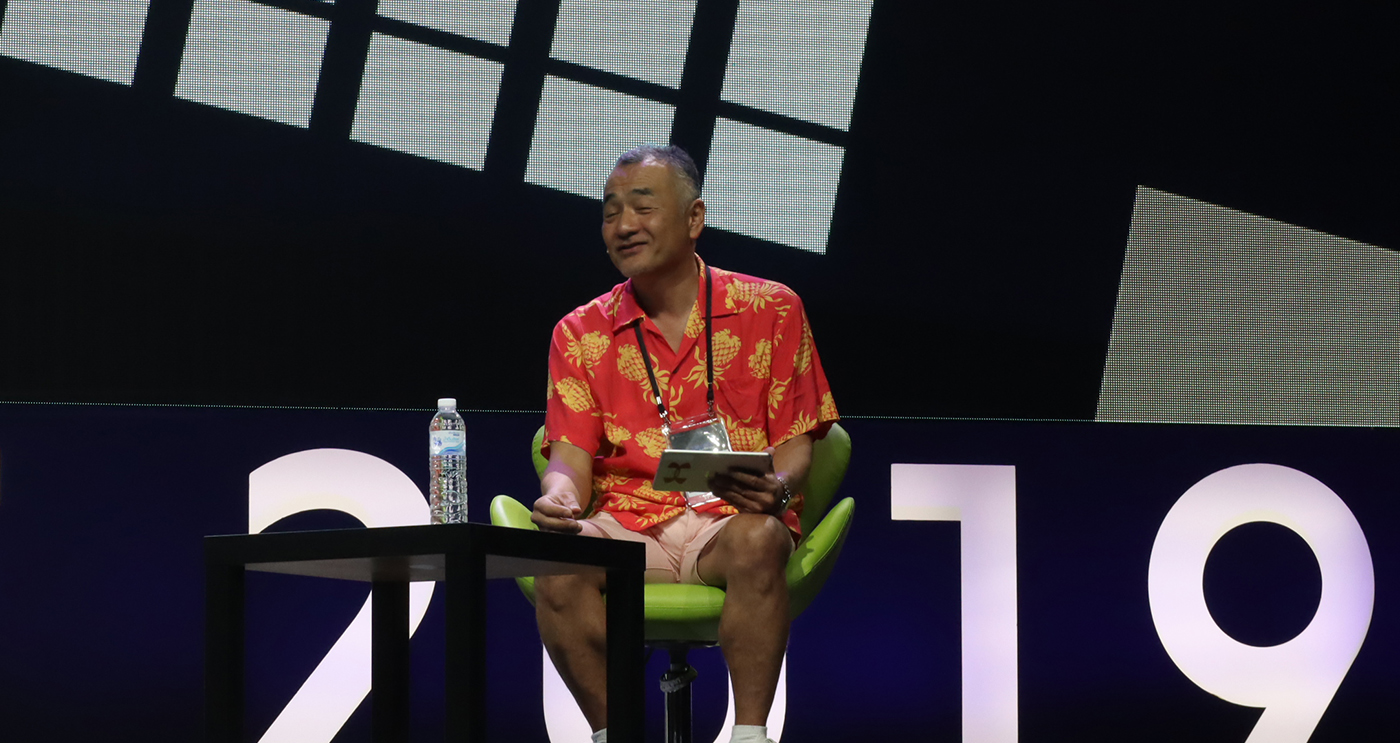 After Hasebe introduced the panel, the audience were immediately treated to a viewing of the first five episodes in Imura’s innovative series. Sakeru Gummy is colorful, fruit-flavored candy which can be torn like string cheese. The Sakeru Gummy series pits the conventional Sakeru Gummy against the new, super-sized Long Sakeru Gummy over a total of eleven commercials. The humorous campaign depicts the relationship of a young couple who bond over their shared love of Sakeru Gummy—until the woman lays eyes on an enigmatic stranger—the Long Man. The series puts a flirtatious and playful spin on the classic love triangle trope. 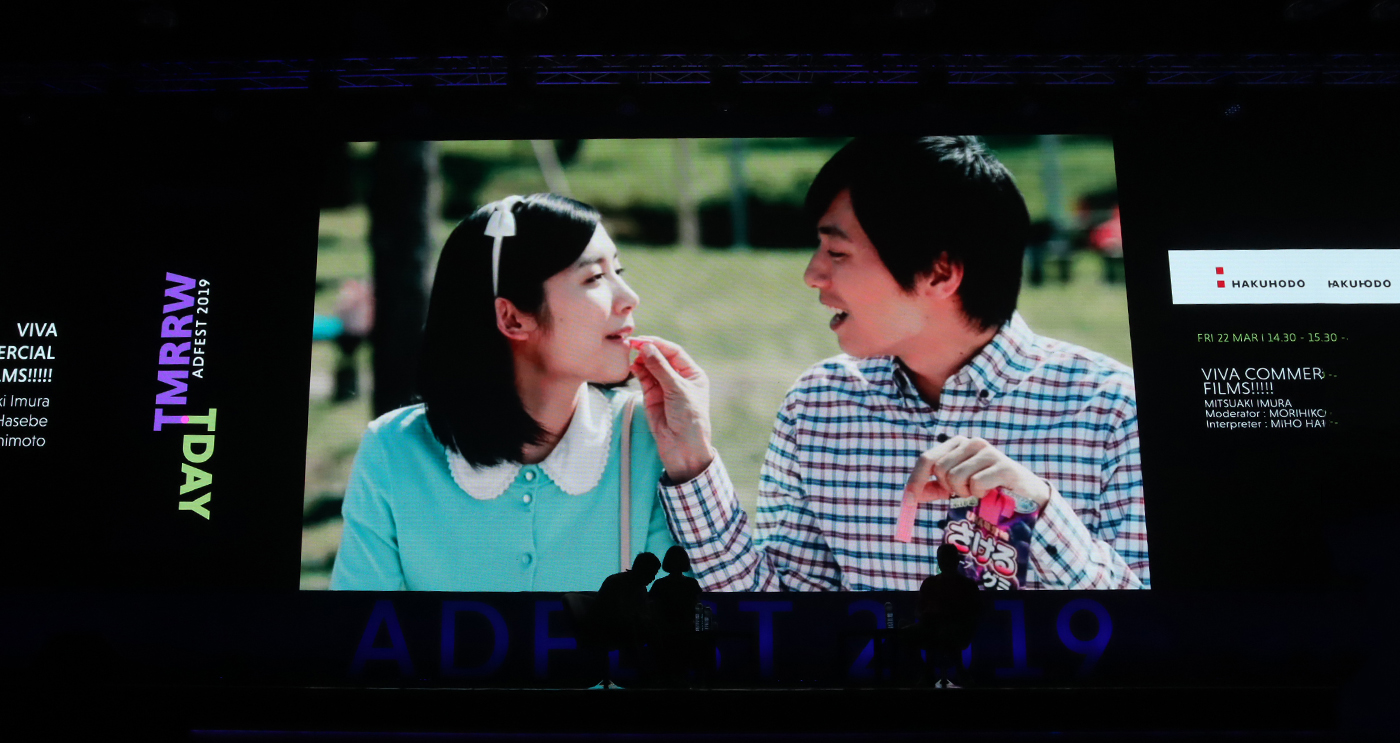 The initial brief for the Sakeru Gummy series was for just one commercial, but Imura wanted to maximize its potential and ended up making eleven episodes. He explained that if viewers’ interest is piqued by what they see on TV, then they’ll look online for more information. “It’s like the TV exposure has gone eleven-fold. I actually call this the ‘eleven-fold exposure strategy!’” he said.

Hasebe likened the first TV commercial to a “trailer” for the entire series. He then asked for Imura’s thoughts on the differences between TV commercials and online content.

“I don’t think they are so different,” Imura said. “The length is different, but it doesn’t matter what the media is.” He noted that while the industry puts a lot of onus on the concept of “media first” and creating a buzz around web content, he personally thinks this is overrated. 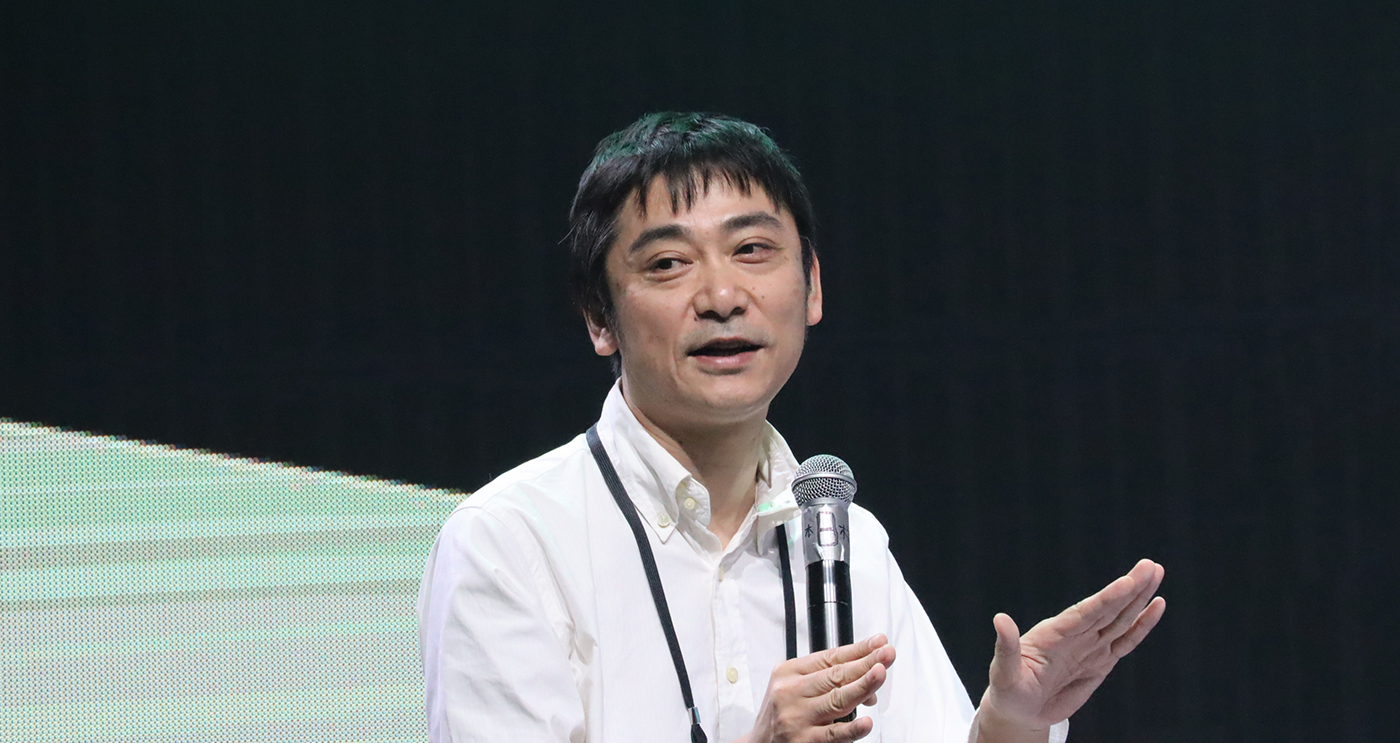 Advertising with an attitude

“This is clearly just a weird piece of candy for kids!” Imura said with a smile. “But we have this drama with the three-way relationship between the grown-ups. I think that the gap between the candy for kids and this three-way drama—the advertising attitude—is what made it interesting.”

“This is the only film on the web that is featuring Sakeru Gummy. Much rarer than films about cats!” he added playfully. “This advertising attitude makes it rare, because it is focusing on the product!”

The next three episodes in the series were then shown to the audience, who watched the heroine becoming increasingly conflicted over her feelings for the two men in her life.

Next, Imura commented on the role of the web in opening up possibilities for creators. Although in the past it was luck of the draw as to whether or not one got to work with a big client and a budget to match, these days a whole series of ads can be made on a very small budget.

Hasebe reiterated that this is particularly important for young industry talents, before turning to the topic of techniques. “Is there any key to making a good online film?” he asked Imura.

Wrestling in your own ring

Imura began by mentioning the old school idea that you had to keep the audience’s interest by introducing an element of surprise every few seconds. “But that sounds like a lot of work to me!” he said, “I think, ‘Why not just keep it short?’”

Added together, the 11 Sakeru Gummy spots run for a total of about six minutes, but instead of having one six-minute film, Imura decided to break it up into “bite-sized films,” which would leave the audience wanting to see more. He noted that creators who work in TV commercials should remember that brevity is one of their strengths. “It’s like wrestling within your own sumo ring!” he laughed.

The wrestling on home ground analogy clearly appealed to Hasebe, who commented, “Like fighting with your best skills. That’s very good!”

The final three episodes of Sakeru Gummy were then shown, ending with a round of applause from the appreciative audience. 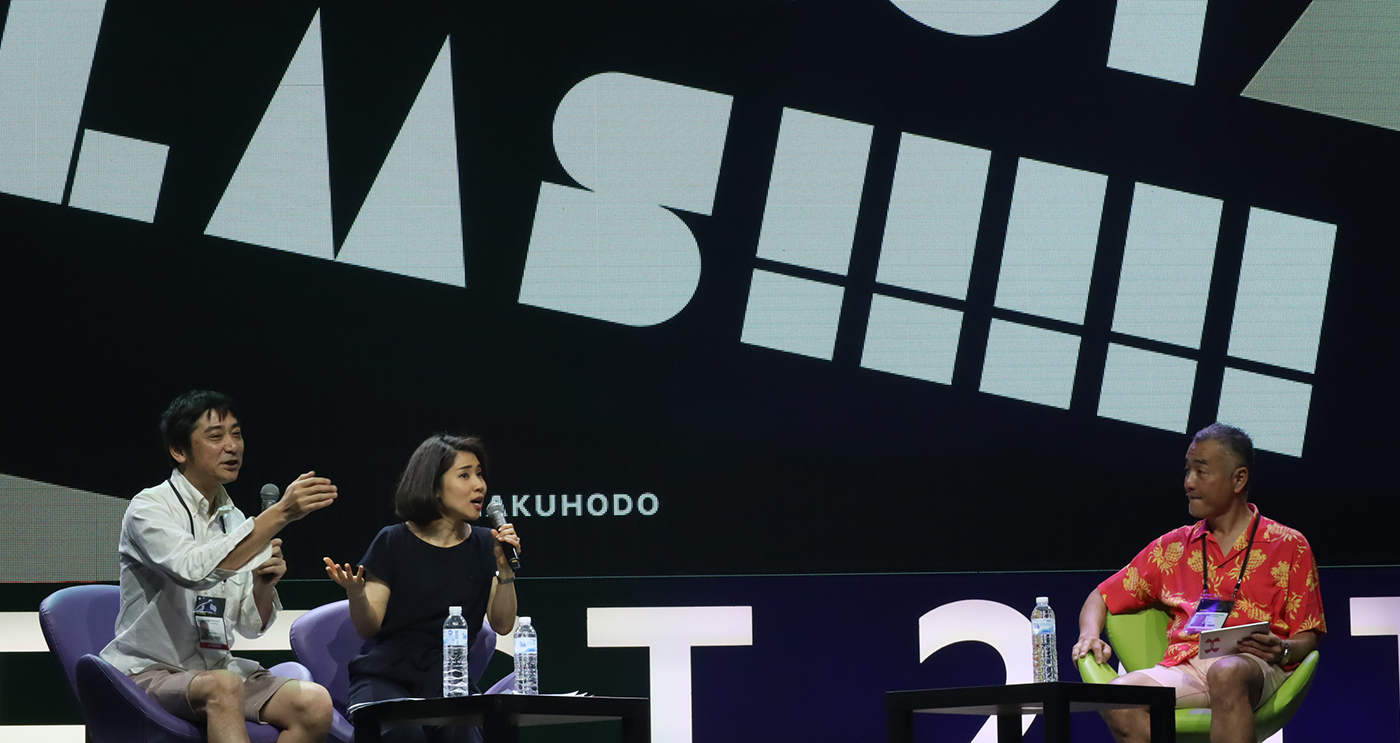 Asked to comment on his personal creative process, Imura said that he simply tries to come up with as many ideas as possible—hundreds of them, in fact. When trying to decide which ideas to pursue, he said it isn’t necessarily helpful to show them to others on the creative team, as they already “get it.” In this context, he recommends showing ideas to the account service people, as they will be more objective.

“However, if they tell me, ‘That’s interesting, but…,’ then I trash the idea!” he said firmly.

“So that’s the sign to kill the idea?” Hasebe confirmed.

Elaborating further, Imura said it’s actually very hard to decide which ideas are interesting. “Unless you’re some great genius, you never know! However, there is something we do know—the ideas which are boring.”

“Use your time to eliminate the boring ideas…. Just be very strict in eliminating something that seems conventional, or very typical,” he advised. “The ideas that are left on the table will be the ones that have potential.”

In closing this informative session, Hasebe summed up the key pieces of advice shared by Imura: 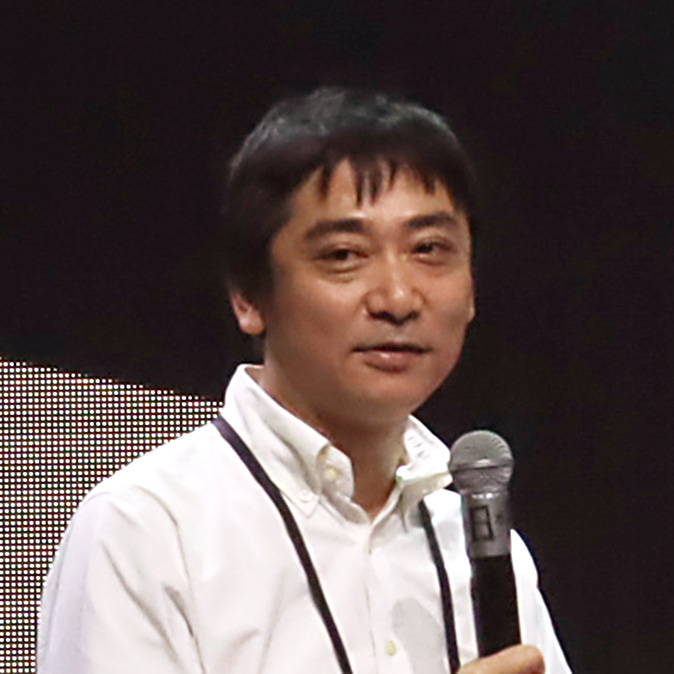 Mitsuaki Imura
Creative Director, Hakuhodo Inc.
The native of Hiroshima Prefecture joined Hakuhodo in 1991 and has worked with clients from an array of domains, including food and beverages, medical websites and local governments. Well known as a master in the field of TV commercials, Imura is the winner of the ACC Grand Prix, the TCC Advertising Award Grand Prix and Silver at Cannes Lions, among others. 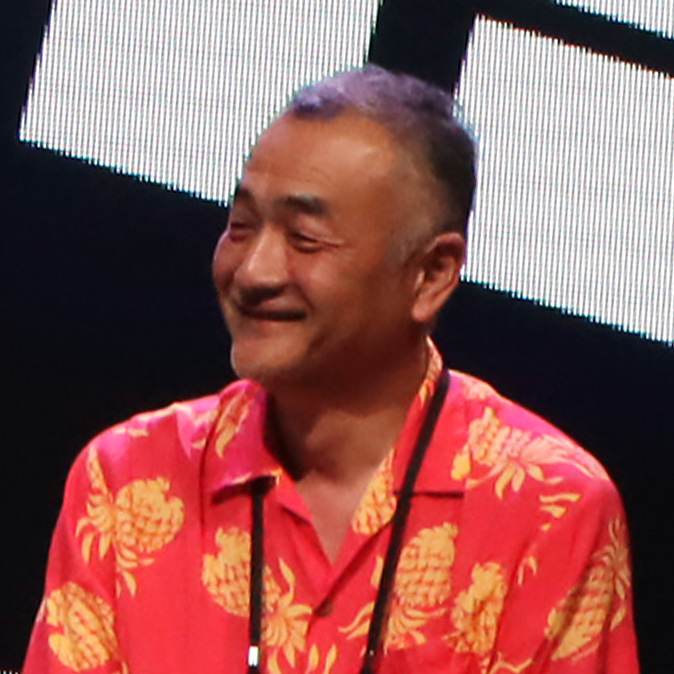