A world where women can live life with wild abandon

Hakuhodo Career Woman Lab, whose vision is to create a society where working women can live easily, is a forum through which we consult people who support diverse ways of living and working. This time, we consulted with Saaya Nakayama (CEO) and Eri Fukuda (CCO) of SHE inc., which has been in the spotlight for offering career support services for women, including a career school and co-working space. In Part 2, we discuss new workstyles for women. 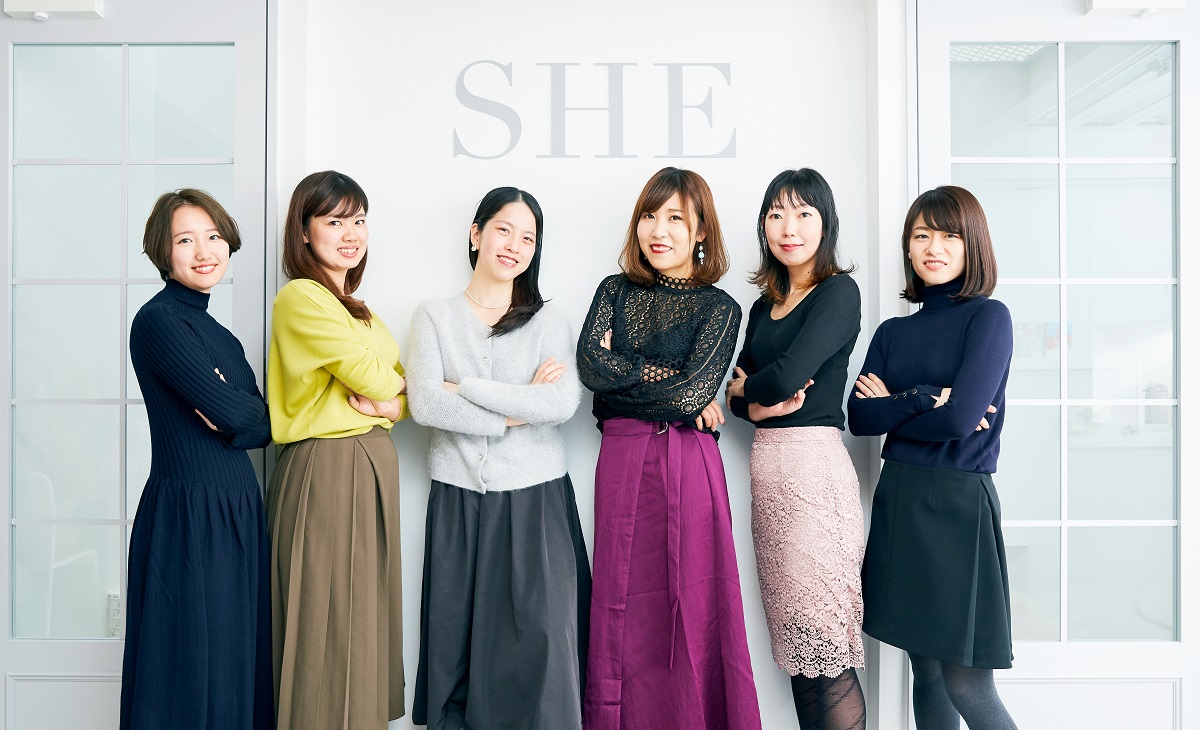 Role models: Women now pick and choose the bits that work for them

HIROYO MATSUI (Career Woman Lab): Is there a course that is particularly popular?

ERI FUKUDA (SHE): Overwhelmingly, our web designer course. And the writing and marketing courses. Around 80% of women that join us take the web designer course. I think it’s because many of them are hoping to go independent in the future and to work from anywhere, and that’s tricky with skills that are tied to one place. Also, web design is really broad and they start with the basics, and then develop their skills as they work out where they want to go, maybe going deeper into visual design, say, or strengthening their UX and information design skills, or perhaps working more on coding or programming.

CHISA UHIRA (Career Woman Lab): That sounds so now, but I still wonder why they are concentrated in the web design and writing courses. Not long ago, I think a lot of young women were worried about having no role models at their companies, say. Like they all left after starting their families, or that only the super women remained; you know the ones that can raise their children, look after their homes and have a career, all done perfectly. What people do the women that come to your course admire or want to be like? 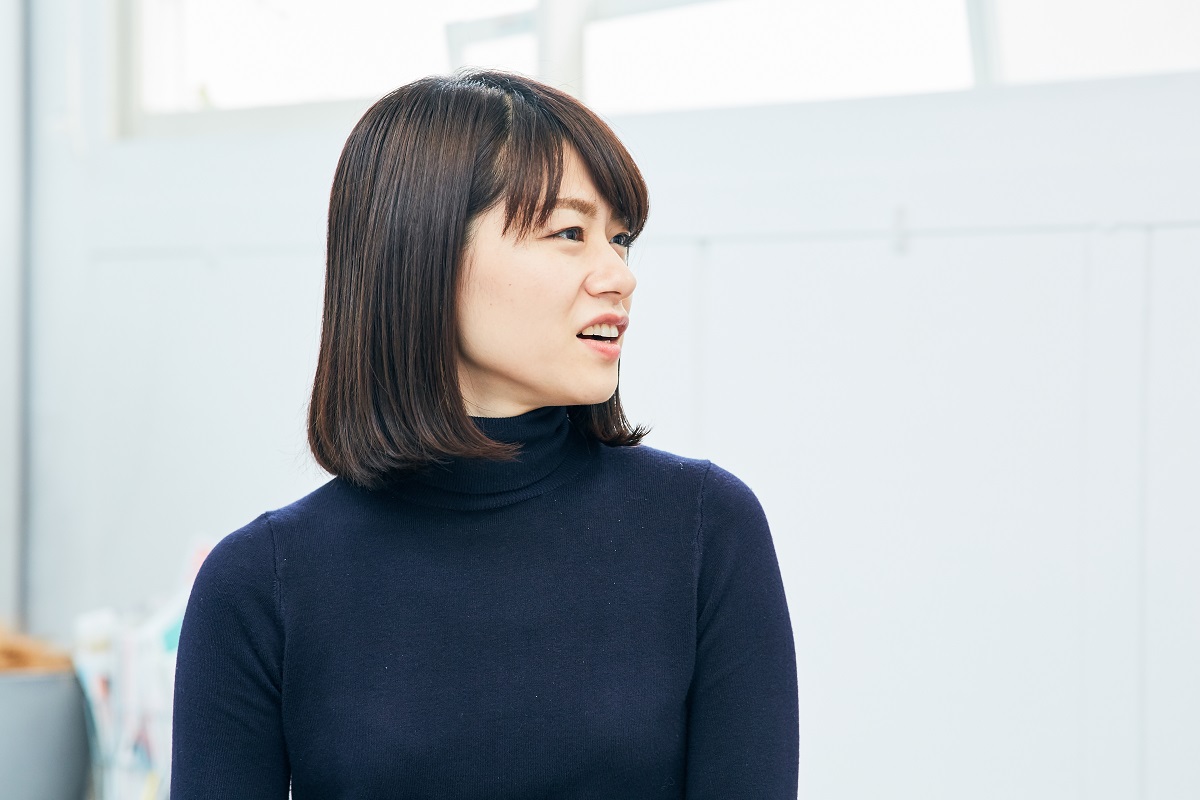 FUKUDA: I think very few of them name a role model. Most likely they are analyzing in their own ways the “amazing ways of working” of people who express themselves in various ways. When you look at people working under their own names on social media, a lot of them are illustrators and the like in design-related fields, so I think their influence is great. Among writers, there are now many who are not professional but earning one million, two million yen just with the web service Note.

YUKI HASEGAWA (Career Woman Lab): When having tea or whatever with my girlfriends, we often look at social media and comment on how great so and so’s life is or how cool the way they go about their work is. We are in an age where it’s possible to see how all kinds of people live and work, so rather than having one role model we want to emulate, we graze on bits and pieces we admire to create our own role models.

FUKUDA: Back in the day we aimed to be like celebrities and others that we could only admire from a distance, but these days micro influencers—people we could just about be if we tried hard—have taken over the role model mantle.

Work and kids and interests: All of these go into the mix to make one “me”

UHIRA: I think the world today is such that taking a step or not taking it can change things immensely. By the way, I have an 18-month-old myself, and there is a limit; absolutely I can’t do the same volume of work as a man. Do you have many participants coming to your courses that already have life plans like wanting to get married or have kids?

SAAYA NAKAYAMA (SHE): Most of them do, and we also have some mothers. Those feeling isolated running about looking after their children come here and seem to feel stimulated by interacting with women from all walks of life. They often end up with really positive outlooks, wanting to do their best at work so they can do their best for their kids.

UHIRA: If previously work was work and childcare was childcare, these days everything goes into the mix, with work and childrearing also for your own benefit, and all of these together make up one “me.” It’s a very now way of seeing things, and so freeing.

MATSUI: I think so, too. At the Career Woman Lab, we call the masculine way of balancing work and life the “slice of cake” type. If you cut the part assigned to work then the remainder is allocated to family and hobbies. So, when work gets busy, the other areas feel pressure. The feminine equivalent is the “bag accessory” type. Work and interests are independent entities, and women want to have them all in balance. But rather than completely separate entities like accessories, maybe they’re more an all-in-one kind of thing.

HASEGAWA: So, the “smoothie” type? [Laughs] 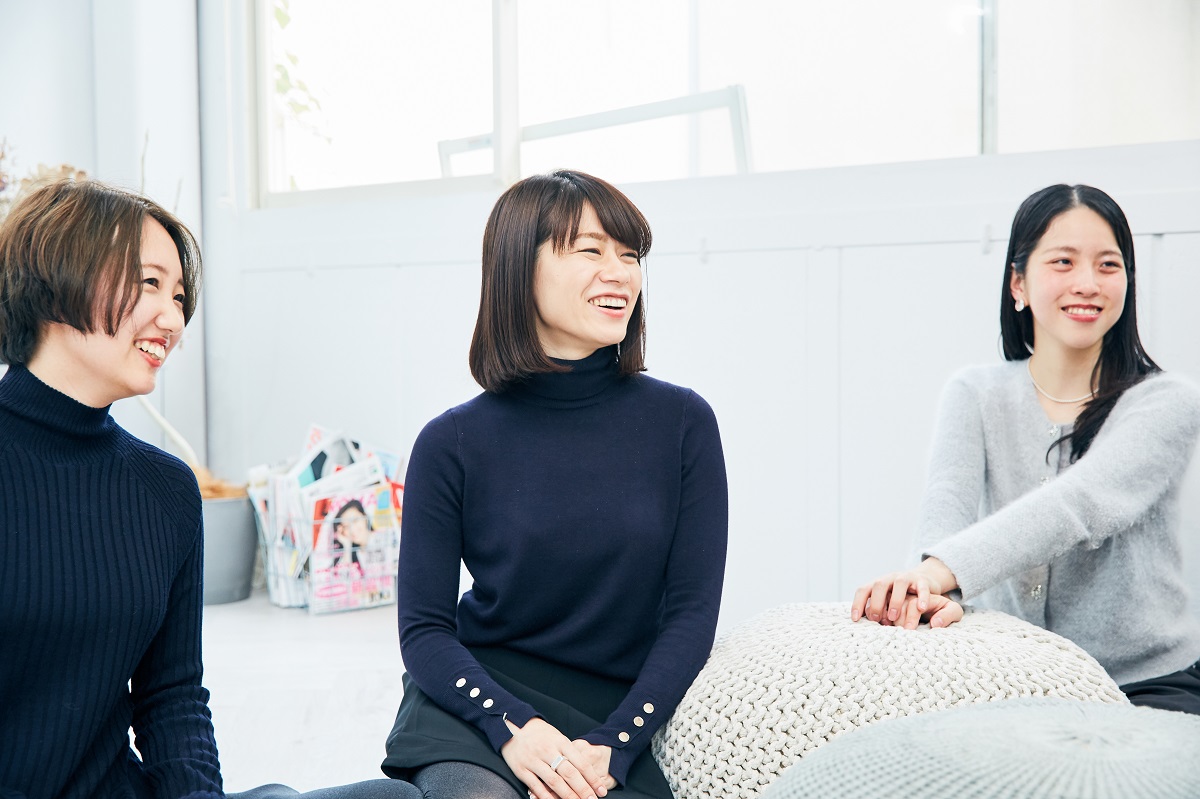 MATSUI: That also includes women with their own names at the companies they work for, right? They are likely hungry for work that only they and not just anyone can do.

NAKAYAMA: Talking to our members, they tell us that they want to do work that people would say to them, “I specifically wanted you to do this,” or “I’m glad I asked you to do this for me.”

MATSUI: We, too, think that it’s women that are more suited to parallel careers and weekend entrepreneurship, and that their numbers will rise. At man-centered companies, women can sometimes find it really hard to make their mark, to work the way they want to, and come to terms with it all. In that sense, I think that having separate outlets for things like self-expression and self-approval make it easier for women to live their lives.

TAKADA: Rather than having the goal of becoming number 1, I think women put emphasis on the process of working toward something. It’s “being” rather than “going.” I think that a lot of women want to work, have their friends and their families and study or take the next step so that each day they can feel that they really lived the day. 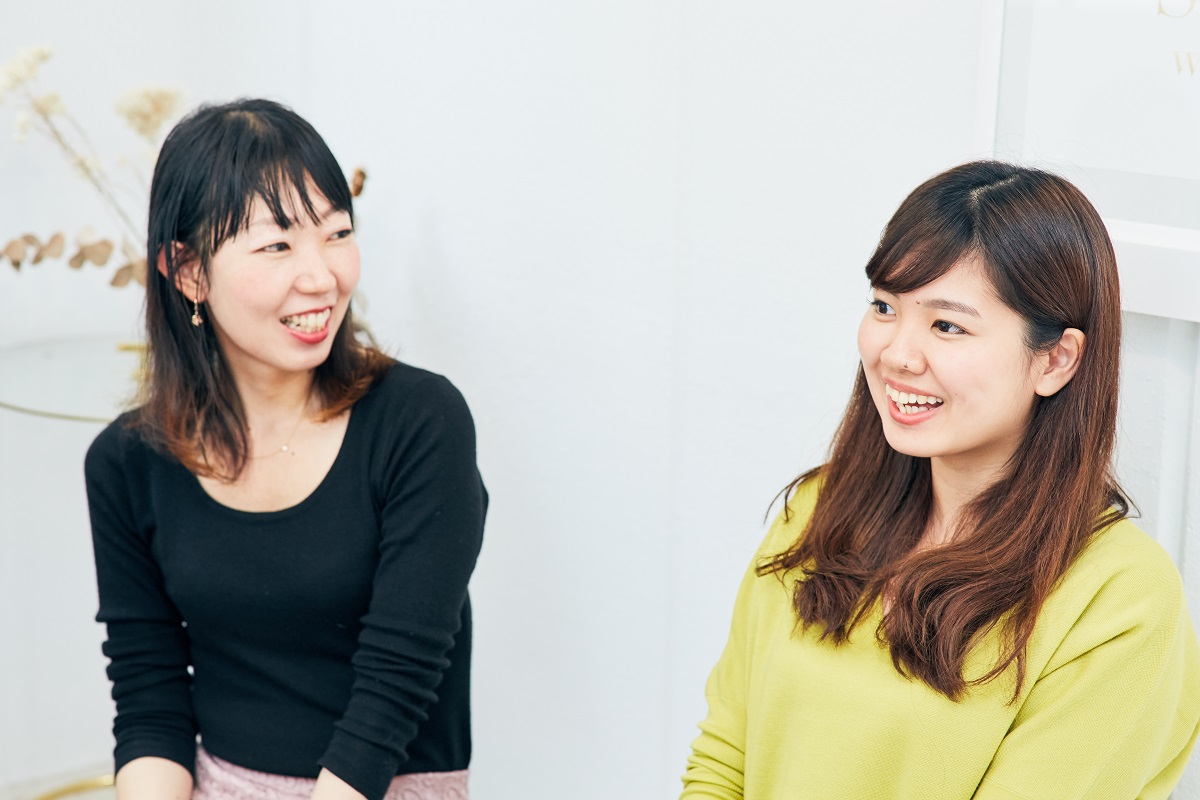 UHIRA: I agree. The masculine career path goes something like: next I’ll become department head, then division head, then unit head and finally president of the company, so if today was tough, then that’s just too bad. But women tend to look for everyday happiness from one day to the next. Perhaps they’re trying to make that reality by coming to SHE, taking courses, and doing work they love with people they love in a place they love.

NAKAYAMA: Absolutely. We want to be a help change society so that the way women work becomes freer, so we would be delighted to be able to work in some capacity with Hakuhodo Career Woman Lab, which shares the same vision.

MATSUI: We’d like that, too. I hope that by combining forces and putting the word out about women’s diverse values we can take the first step toward realizing a society that’s easy for women to live and work in. In closing, could you give us the outlook for SHE going forward?

NAKAYAMA: In terms of SHElikes, we are going to really expand the learning modules, and would also like to enhance the provision of job opportunities. We’d also like to go nationwide and international. Currently we are focused on helping women find answers to “what does a me-like workstyle look like?” But going forward, our target—the millennial generation—will move onto the next life stage, have kids, start getting older and, I think, start to think about issues in society such as food and the environment. At the right time along the way, we’d like for them to use the SHE brand to keep offering the value that only they can. 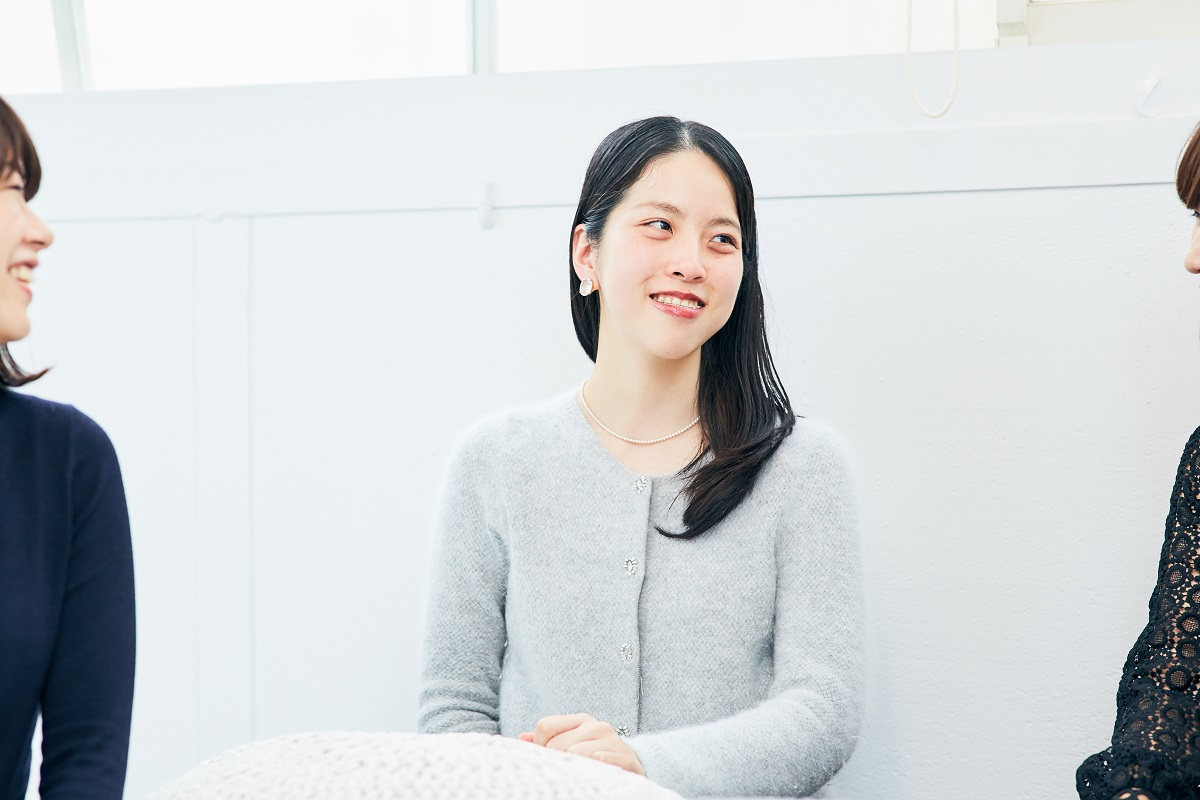