A world where women can live life with wild abandon 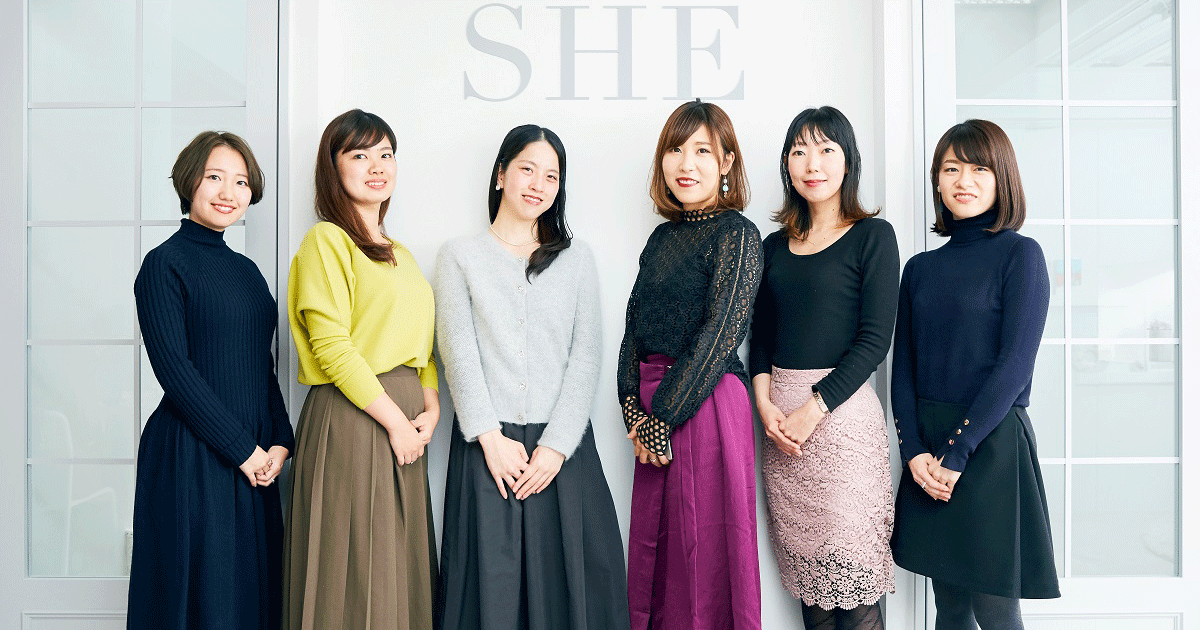 Hakuhodo Career Woman Lab, whose vision is to create a society where working women can live easily, is a forum through which we consult people who support diverse ways of living and working. This time, we consulted with Saaya Nakayama (CEO) and Eri Fukuda (CCO) of SHE inc., which has been in the spotlight for offering career support services for women, including a career school and co-working space.

“Live life with wild abandon”: A vision that came out of the pair’s formative experiences

YUKI HASEGAWA (Career Woman Lab): SHE is constantly mentioned as the poster child for people and organizations supporting working women, like we do at the Career Women Lab, and we were anxious to have an opportunity to speak to both of you. First, could you introduce yourselves and tell us what led you to establish SHE.

SAAYA NAKAYAMA (SHE): Absolutely. I’m Saaya Nakayama. I was born in 1991 and am currently 27. I have been involved in marketing and consulting work for women since I was at Waseda University, namely as proprietor of Pajacolle, a pajama fashion show that is used as media vehicle, doing marketing and product development consulting for companies. When I became unsure about whether I wanted to keep doing that permanently, I decided to look for a challenge I could to stake my life on a bit more—and comrades with which to do it—and joined Recruit, an integrated human resources services company. A month after starting at Recruit, I made it through a contest to propose new business ideas, and ended up staying for around two years. Then, after working as director of an educational startup, I established SHE with Eri in April 2017.

ERI FUKUDA (SHE): I was born in 1990 and am 28. As a university student, I had the opportunity to study in San Francisco and in Silicon Valley I met lots of local entrepreneurs and entrepreneurs who had come to study from Japan. Five or six years ago, it was still the early days of the social media age and out of the corner of my eye I saw entrepreneurs the same age as me programing on black console screens, saying they were creating a video version of Instagram. It left a big impression. People able to turn their ideas into reality by themselves will be greatly valued in the future, I thought. I, too, wanted to learn design and programming as a means to do that, and studied them on my own from the time I got back from the US. But no matter how much I studied, the opportunities for a female programmer in her 20s were extremely limited or should I say I came up against some really high barriers. Thinking it would be great if women could more easily study such things as design and programming, while still at university I started a school for women just starting out. This became the basis for SHE today. I wanted to go into business for myself based around this, so I first joined Recruit to get some “warrior training,” and there I met Saaya. 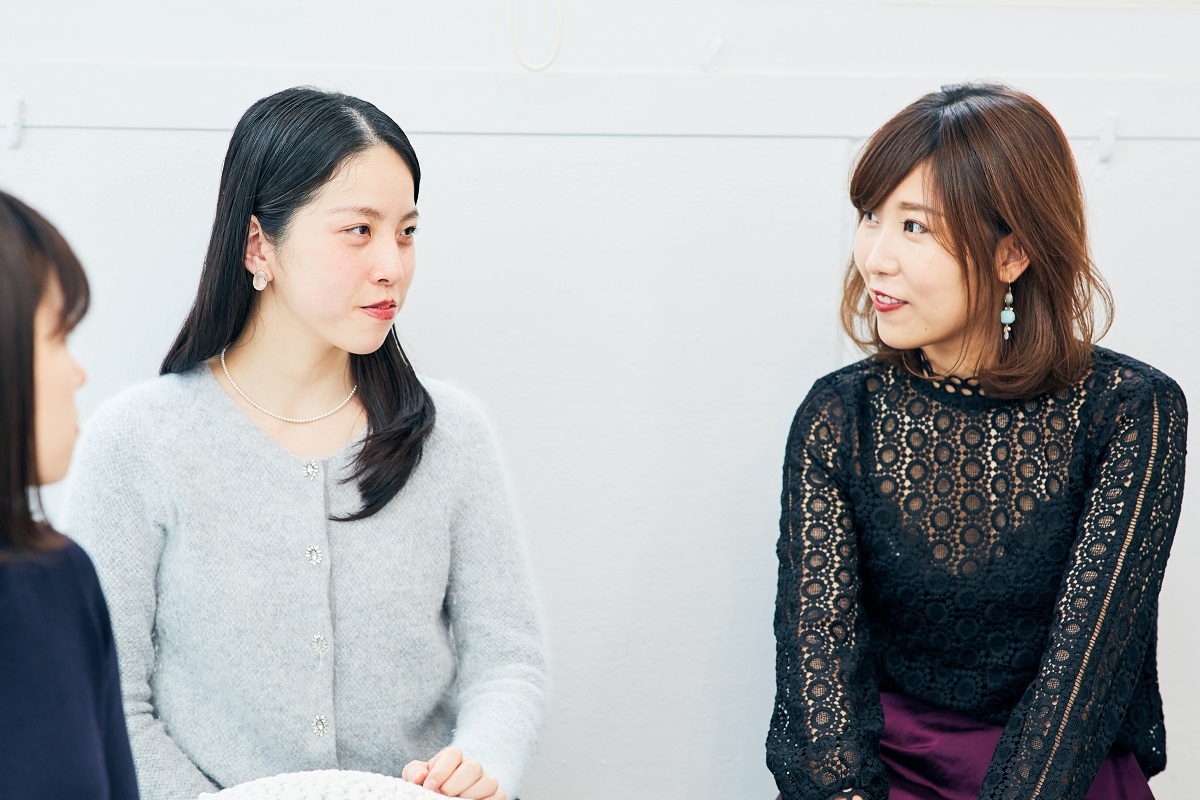 NAKAYAMA: The first thing our company established was not the content of its business or the domain in which it would operate, but its vision. That is “Each of us will give play to the value that only we possess to create a world where we can live with wild abandon.” I was educated at a girls’ school right through to high school, and the abiding worldview was that a woman’s happiness comes from being a full-time homemaker and supporting a man. I lived my whole life resisting such values, all the while just wanting to unleash my spirit and say this is what I think is best to the things I think best, without worrying about precedents or accepted wisdom, and then put them into action. From this early experience, I came to believe that if the world changed so that everyone could give play to the things that only they can do and live their lives with wild abandon, not only would each individual be happy, but everyone around them, and society as a whole as well. Together with Eri, who wanted the same thing, we operate SHElikes, a creative school that functions as place to think about ways of working that work best for the individual, and SHEcreators, which provides graduates of SHElikes with job opportunities.

TOMOKA TAKADA (Career Woman Lab): We understand that you started off as something like a community for Millennials. When I read the SHE press release communities focused on the Millennials were rare and I thought, “Something new’s happening here.” I’ve been secretly supporting you ever since [laughs].

HIROYO MATSUI (Career Woman Lab): The thing I’m interested in is the phrase “live life with wild abandon.” It’s really strong and unique. Why did you choose this phrase and not some other?

NAKAYAMA: In terms of the direction of this phrase, I wanted it to include my passionate determination, not some namby-pamby stance. Even glossing over the reality, making a living doing what you love in an honest way is not as easy to do as it sounds and you need strong determination. To support yourself doing what you love, you need a strong sense of responsibility and determination, I believe, and, I wanted words that would convey my commitment to supporting those who choose this path and that would stir the soul.

MATSUI: I totally get that. Making a living doing what you love is something that everyone would like to do, if possible, but you can’t just sort of do it as an extension of a hobby; you need to be determined, including about how you will support yourself. What kinds of woman attend your career school?

FUKUDA: In terms of age group, the largest group is those just under 30. They have been in the workforce for around five or six years since graduating from university, and have got some skills under their belts. But, I think, they are starting to give thought to whether they want to continue with their current career trajectories, or look at other options, such as changing jobs or going independent. Many of them are looking for advice on what they would be good at.

HASEGAWA: Amongst your offerings is a course on finding yourself.

FUKUDA: There is. We didn’t have it at first, but listening to women after starting our courses, we found that many participants still didn’t know where they wanted to go with their careers and we thought that helping them to understand themselves and get in tune again with what makes them happy would be the quickest way of sending them down their most satisfying career path. That’s why we started a course called “Finding Yourself.”

CHISA UHIRA (Career Woman Lab): Are they so keen to find themselves because they are starting to become that unhappy with their careers?

FUKUDA: I think so. It might be a characteristic of the women that come to SHE, but around 90% of them are unhappy with their current jobs.

MATSUI: Research conducted by the Career Woman Lab found that 59.8% of working women in their 20s and 30s want to make a living doing what they love. At the same time, 45.7% said they were unhappy with their current jobs. Some 52.9% said that they don’t have any particular goals or dreams for their jobs, so I think it’s easy to imagine the current situation, where many long to make a living doing something they love but don’t know how to go about it. 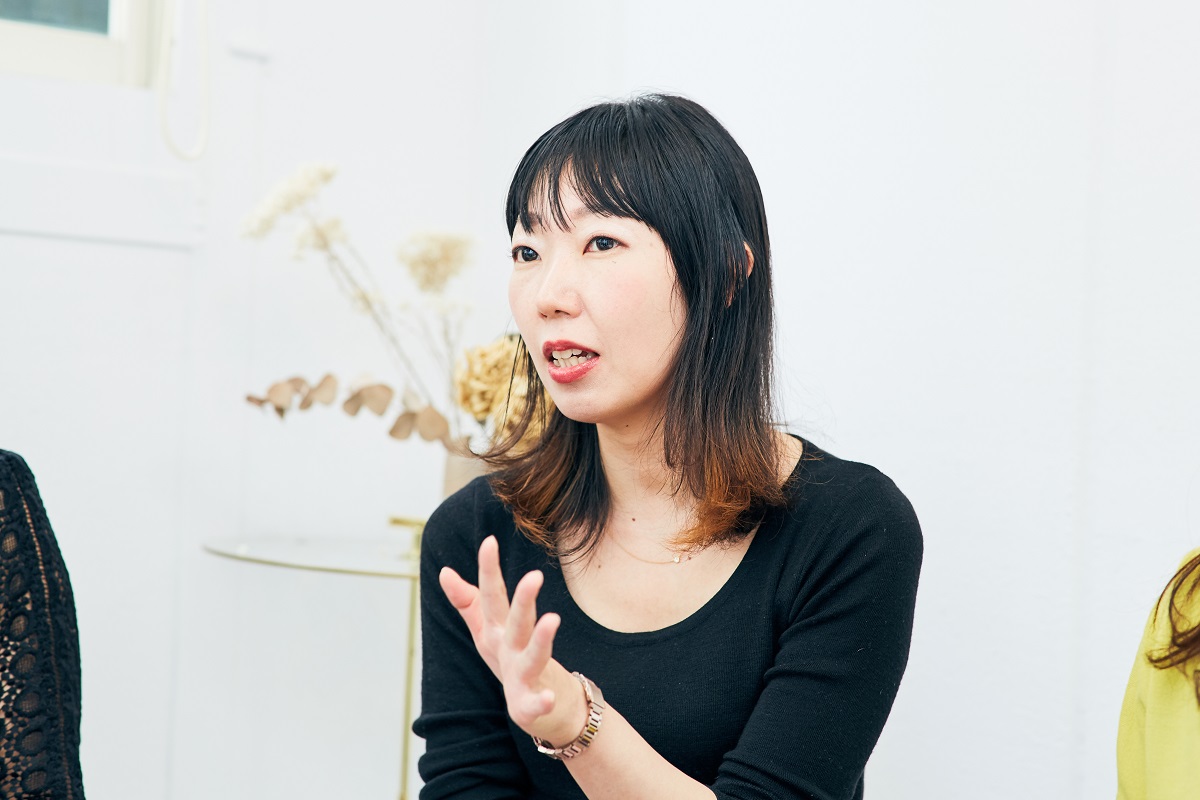 FUKUDA: I agree. But getting their thoughts in order by talking things through with others, many women find their answer becomes evident. At SHE, we also do extensive career workshops, and we start by asking participants to divest themselves of any sense of embarrassment or feeling that they are getting above themselves, just while they are at SHE, face their feelings honestly and talk about their dreams. When women get together, it’s really hard for us to talk about our careers and dreams for the future, right? But we make it a safe place for these women, who are all proactive about the future, to share their worries and dreams.

NAKAYAMA: We also have a workshop where women draw a picture of a flower as a symbol of the self they want to be, and it always puts great big smiles on all their faces.

HASEGAWA: Flowers vary widely, from sweet flowers like dandelions, to truly majestic blooms, so I’m sure they show the women’s diversity.

NAKAYAMA: It’s true, they’re all really individual. The women draw flowers that represent their own thinking, whether they want to keep their feet on the ground and just grow a small one or whatever, and we reach their hidden inner thoughts through them.

FUKUDA: When we ask women who come to SHE for the first time, the overwhelming response to this is that they now realize that they were not alone in having concerns. So many women are tough on themselves, knowing that they can’t go on as they are, but unsure of what to do. But they all tell us that by meeting others with the same worries in a real place, and being surrounded by women that are proactive about living life on their own terms, that this has become their new normal and they no longer fear taking risks. It’s like just knowing that they’re not the only one with worries makes it easier for them to take the first step. 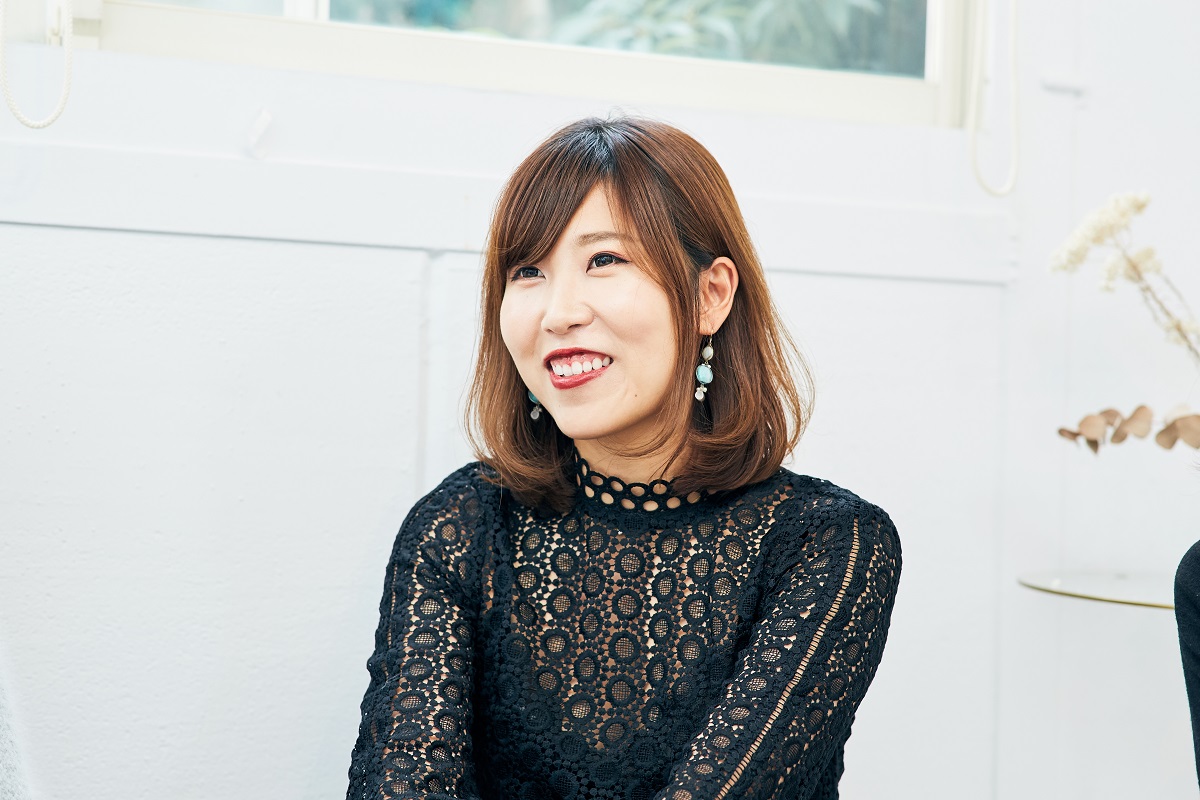 Parallel careers and weekend entrepreneurship are better suited to women!? In Part 2,we find out about new workstyles for women.