The need for staffers able to handle international work is rising rapidly in line with globalization. Accordingly, Hakuhodo has been training global personnel by sending Tokyo headquarters staff to Group offices around the world every year to work with local staff for three months. In 2018, a total of four staff were sent to Malaysia, Indonesia and Vietnam from October to December. Creative Director/Copy Writer Naho Manabe and Strategic Planner Mitsuru Murayama report on their experience of training in Vietnam. 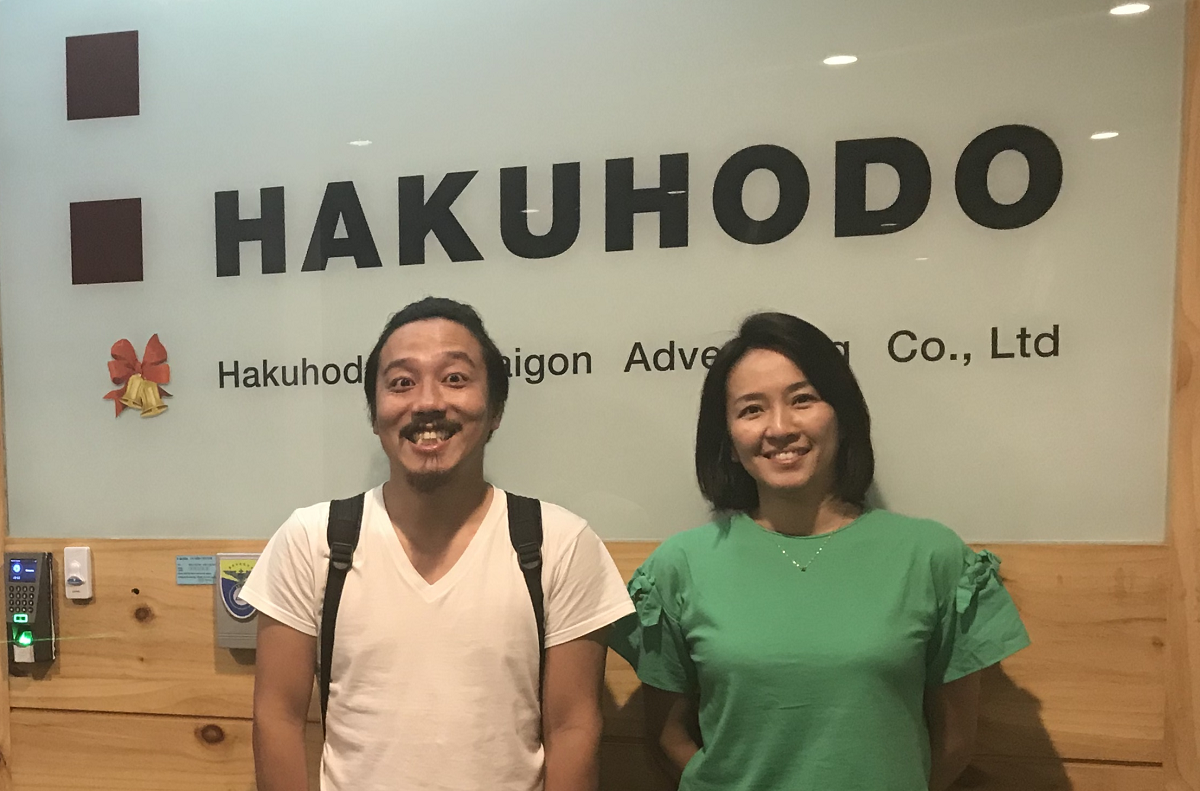 At the Hakuhodo & Saigon Advertising entrance

The Socialist Republic of Vietnam, a nation 88% the size of Japan that stretches long from north to south, is home to 92 million people (third most populous ASEAN country; 70% of the population of Japan). Mitsuru Murayama and I flew six hours to its economic center, Ho Chi Minh City, where we worked for three months.

Hakuhodo has five Group companies in Vietnam, and we were posted to Hakuhodo & Saigon Advertising (established 1995) and Hakuhodo Vietnam (established 2012). The two companies’ main business is communication for Japanese companies operating in Vietnam. They have a combined workforce of around 150, and the average age of employees is slightly under 30 years of age. They were hard-working, warm, vibrant offices. 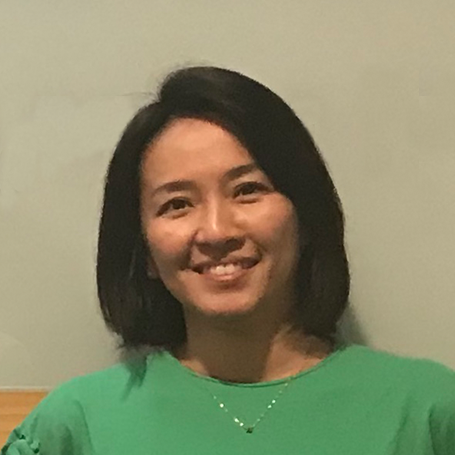 Getting my bearings in a multinational creative environment

The creative section I was assigned to had around 30 staffers, including three creative directors—one Filipino and two Vietnamese—and the Vietnamese copywriters and art directors that they oversaw. I was given a creative director-type position on new business. To enable me to give the clearest creative direction possible, as soon as I arrived, I walked around the city, got a feel for what gives people’s lives meaning, watched lots of commercials, tried out various apps and websites and generally did what I could to emotionally understand our targets and the media environment. I also talked lots to strategic planning and account service, and took care to gain consensus on the overall logic, in English. Ultimately, we would propose to the client in Vietnamese, so I also studied the makeup of the language and copywriting techniques a little.

Each birthday is celebrated with a whole cake. My birthday came while in Vietnam and I had a lovely surprise

The advertising industry is still very much in its infancy in Vietnam, and straightforward communication is preferred. The work was authentic, and the copywriters had better English language skills than me. But I thought my colleagues could further deepen their thinking and consider meaning to create output that didn’t sound “explainy,” so I spent time working through things with them. There was a moment when everyone had the same positive reaction to a good idea, and I really felt that creative is borderless.

I ventured beyond Ho Chi Minh City every second weekend. I went to Vung Tau by high-speed boat, Phu Quoc near the border with Cambodia, Da Nang and Hoi An in central Vietnam, and Singapore and Bangkok as well. Just traveling an hour or two, you can set foot in a city at a stage of economic development 30–50 years apart from the one you just left. This dynamism is something you just can’t experience in Japan and it was an eye-opener for me. I also felt a slight sense of foreboding, that though Japan may be a little more developed, it is an island nation not really central to Asia.

I have a daughter aged 10 and a son aged 8, but spent my three months in Vietnam alone. Before setting off, I created “household manual” for my mother and husband, asked the school and my mommy friends to help, too, and gave the kids their first smartphones (LINE Mobile phones) in preparation for looking after them from afar. Being able to talk on the phone without worrying about the cost was an absolute godsend, and thanks to this, the kids got through my absence without any real dramas. When I joined Hakuhodo, female employees accounted for only around 10% of the workforce, but now the figure is probably around 30%. I hope that my challenge (experiment?) will prove useful for other women that follow.

While I usually spend around four or five hours a day on the kids and housework in Tokyo, I didn’t have to do so in Ho Chi Minh City, and felt free to concentrate on my work, as though the day was 28 or 29 hours long. It was a strange feeling, like living two lives simultaneously, and the detoxing and recharging effect the vibrant go-go vibe of the city had on me both physically and emotionally was really huge. I am grateful to the many people who supported me.

Mitsuru Murayama
Strategic Planner
Hakuhodo Inc. Kansai Office
Mitsuru Murayama joined Hakuhodo’s Kansai Office in 2014 following stints at several other agencies. He has two bases, working in the city during the week, and spending his weekends on the coast. Sometime in the future, he’d like a different two bases: one in Japan and the other abroad.

The planning team I was assigned to had 11 staffers in total. There was a Japanese leader and the rest of the team was really young, in their 20s–30s. They were evenly split between those who came from research companies and those who’d joined from other agencies.

A rewarding market for a planner

The thing I thought most different when I started working there was that both creative and planning people were extremely focused on the product’s unique selling points. In which spec was it better than the competition? For instance, in the case of a car, there were lots of conversations like: “No other brand has this feature. How can we showcase it attractively?” I took this as a difference between Japan, which has reached peak maturity and saturation, and Vietnam, which is growing rapidly and people buy things in a straightforward manner. Vietnam is the sort of market where it’s possible to believe that even high objectives, like doubling the previous year’s figures, are possible and as a planner, this was exciting for me. 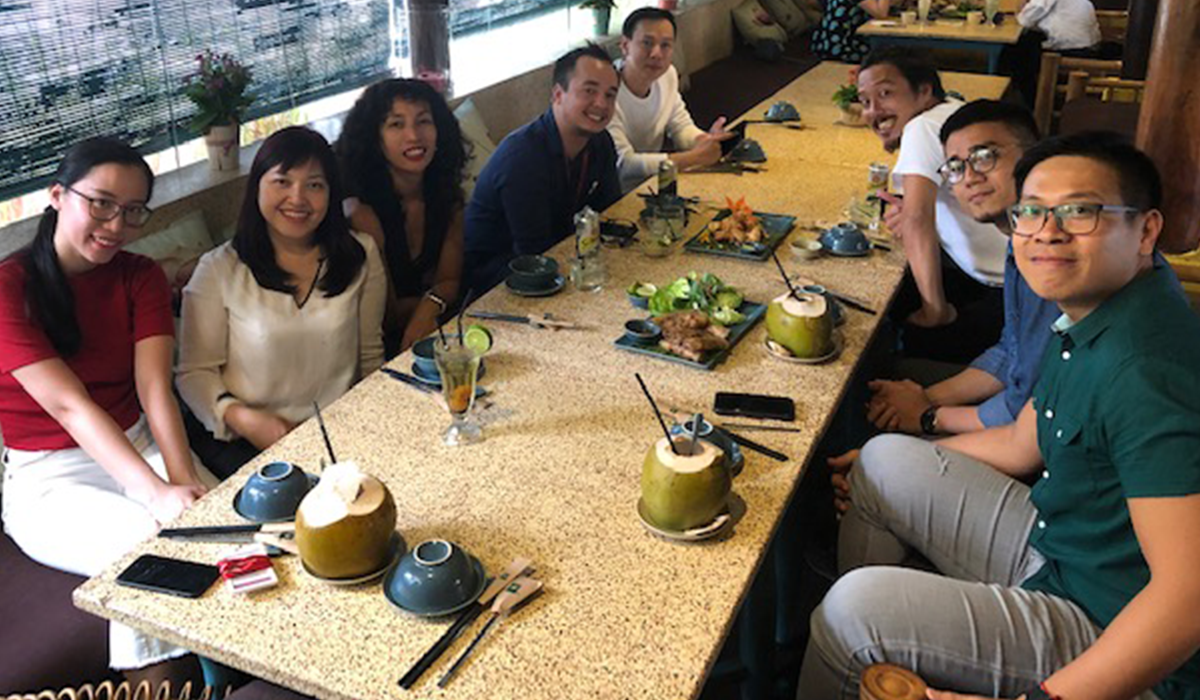 Lunch after a presentation

Local friends and the coast keep homesickness at bay

Ho Chi Minh City is a major center, but take one step out of the city, and you’re surrounded by tranquil scenes. I spent my weekends at nearby beach towns. You can easily stay somewhere for 1,000 yen a night. My weekends were full even though I was far from my family thanks to local kite surfing mates who waited for me on the beach every week.

With kite surfing mates at the seaside town of Vung Tau

I lived in the US for about 10 years and was somewhat used to working in English, but when I look back on my previous work, it was either for Japanese brands expanding into overseas markets, or work for international brands in Japan. I only did work where I could somehow leverage the fact that I am Japanese. But in Vietnam, around me I met a Filipino executive creative director, a French digital planner and others working without a thought about their nationality or first language.

Thanks to this, during my three months in Vietnam I found my next goal: to work as a planner in an environment where I can’t hide behind my language or nationality.