Enjoying the feeling of being out of place: OJT in Indonesia

The need for staffers able to handle international work is rising rapidly in line with globalization. Accordingly, Hakuhodo has been training global personnel by sending Tokyo headquarters staff to Group offices around the world every year to work with local staff for three months. In 2018, a total of four staff were sent to Malaysia, Indonesia and Vietnam from October to December. Interactive Director Daiki Nishihama reports on his experience of training in Indonesia. 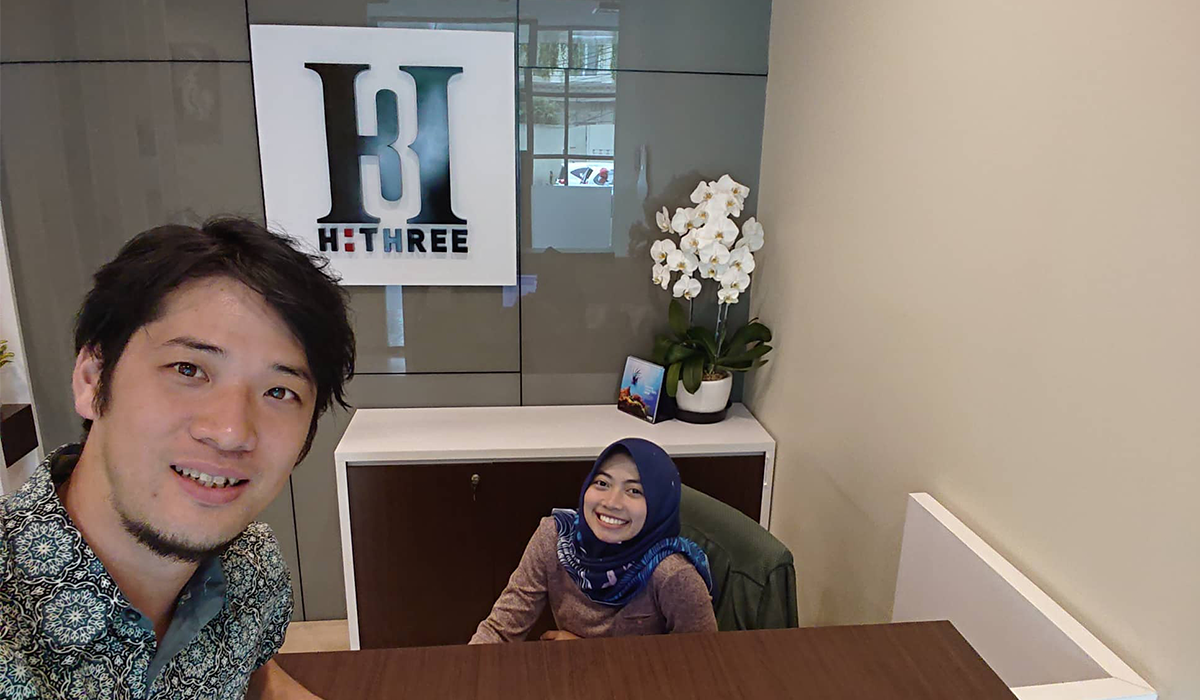 Including Hakuhodo Indonesia, which is renowned for its creative having been named Indonesian Advertising Agency of the Year and collected awards at various international advertising festivals, Hakuhodo has four brand agencies in Indonesia. I worked at another of these, PT Hita Wistara Mahir (H:Three).

H:Three comprises around 30–40 diverse staffers, from strategic planners to creative to account service, and though it is small, it is powerful. It is young and active, and full of smiles.

Thirty is older than average

How much do you know about Indonesia? In all honestly, I went there without too much foreknowledge. In fact, the country is comprised of over 10,000 islands and is the world’s fourth most populous, with over 260 million people. The official language is Bahasa Indonesia, but as a multiethnic country made up of many islands, I understand that there are many languages, too. The average age of the population is young: just 29 years of age. It’s a figure that speaks to the youth and vitality of the cities and offices.

Is “matching” part of a country’s infrastructure?

Cars and motorcycles are king in Jakarta, and you only rarely see people getting about on foot or by bicycle. Supporting this are Grab and GOJEK. Grab is a ride-sharing service like Uber of the US, and GOJEK is a motorcycle ride-sharing service that has grown into a multi-service platform like China’s WeChat. In addition to taxi and delivery services, it enables all sorts of transactions, from ordering a maid or laundry service, to arranging a massage or delivery of gasoline, all via one app. I was surprised that something that was initially a service to help people get from place to place had grown to support everyday life in all kinds of ways. This made me realize that the trend of matching and trading individuals’ time, skills and property through the internet is a world-wide phenomenon. I also learned that the functions that users want are simple, and that when those functions work, they can become part of a country’s infrastructure.

The smartphone knows no national boundaries

It’s said that Indonesia’s internet-using population has increased by over 100 million since 2010, growing explosively to 150 million people today. I was curious to know what “the Internet” means in this country and undertook an independent internet survey to find out. The top scoring items were music, movies and other entertainment, Messenger, then online banking and shopping apps. While there may be issues with speed, my findings were that the vectors of the convenience of the Internet tend toward the same direction all round the world. Using the Internet is, I became convinced, more like communicating across borders than across generations.

While you can travel the world on your smartphone, some roads cannot be traversed. During my stay in Indonesia, I was told on a number of occasions, “If I want to see if there are advertising campaigns like this one in your country, I can’t search for them as I can’t type in Japanese.” Naturally, I understood this in my head, but it was an eye-opener nonetheless. As I said earlier, my knowledge of Indonesia was sparse, and I’d certainly never searched in Indonesian. It is common to look at case studies from other countries, but it is not possible to search for all creative and services in your own language only. I realized anew that even if the need is there, the fact you can’t search for it on the Internet means that something essentially doesn’t exist.

There are needs that cross borders. Therefore, just making search possible will quietly open the doors to a global market, allowing people to look in. The small support of language is, I thought, a key step in marketing to the world. 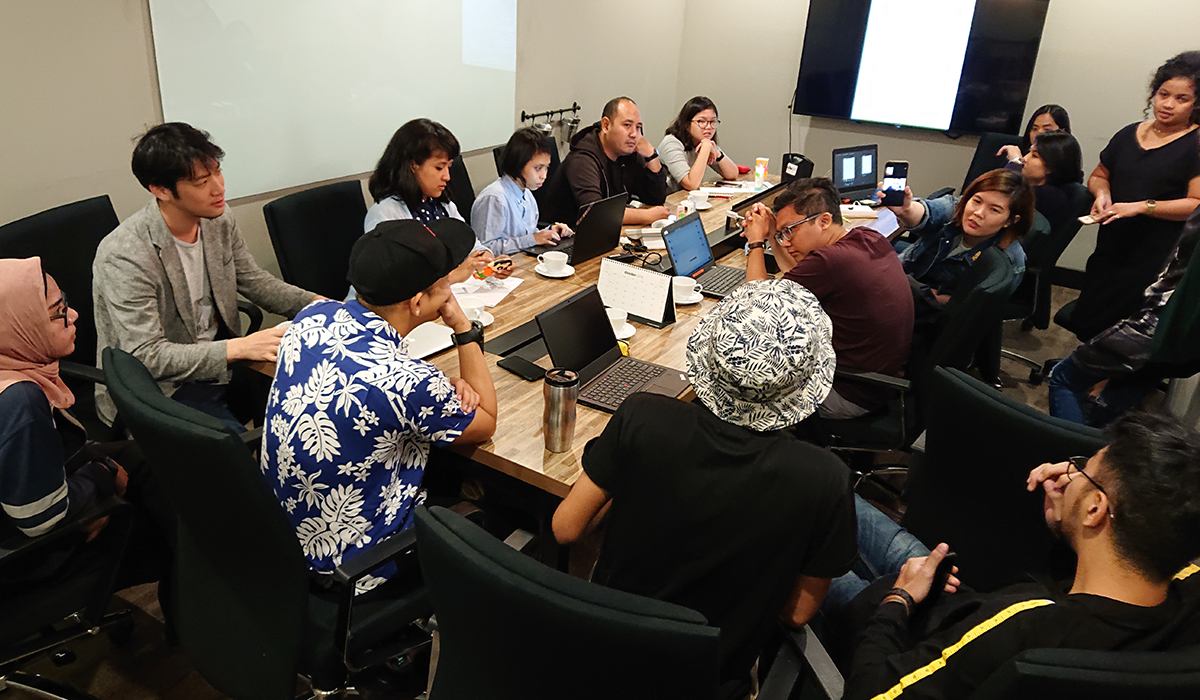 Meetings are attended by everyone

The fresh feeling of being out of place creates new value

My Indonesian colleagues teased me that since “sei-katsu-sha” is Hakuhodo’s philosophy, I needed to experience what my Indonesian colleagues did. These words affected more than just my work. For instance, they made me proactively get about by motorbike taxi, take a rocky four-hour ride on a local train that even the locals don’t ride, negotiate with a wholesaler in Indonesian only, and eat hot morning glory with my hands, all experiences I’d never had in Japan.

Emulating local ways opens your heart and invites a deeper experience. Dismissing things as not relevant to you or a bother would be to throw away valuable experiences. I feel strongly, too, that experiencing the way people live in Indonesia and thinking about the differences with my own life and why things are the way they are was really important for seeing my own values in an objective light. The feeling of being out of place that came from that was mine alone, and an important raw material for developing new points of view.

I made some realizations about work, too. In Indonesia, it is common to have music playing and to play musical instruments during the work day. At first, I thought it was distracting, and was surprised when they said to me, “Do what you wanna do!” I realized then that silence is not a prerequisite for doing your job—and also that I did not immediately know what I wanted to do. The reason my workmates were always smiling was because they create a fun environment for themselves as a matter of course. It was a shock that just tapping away on a computer could look so different. 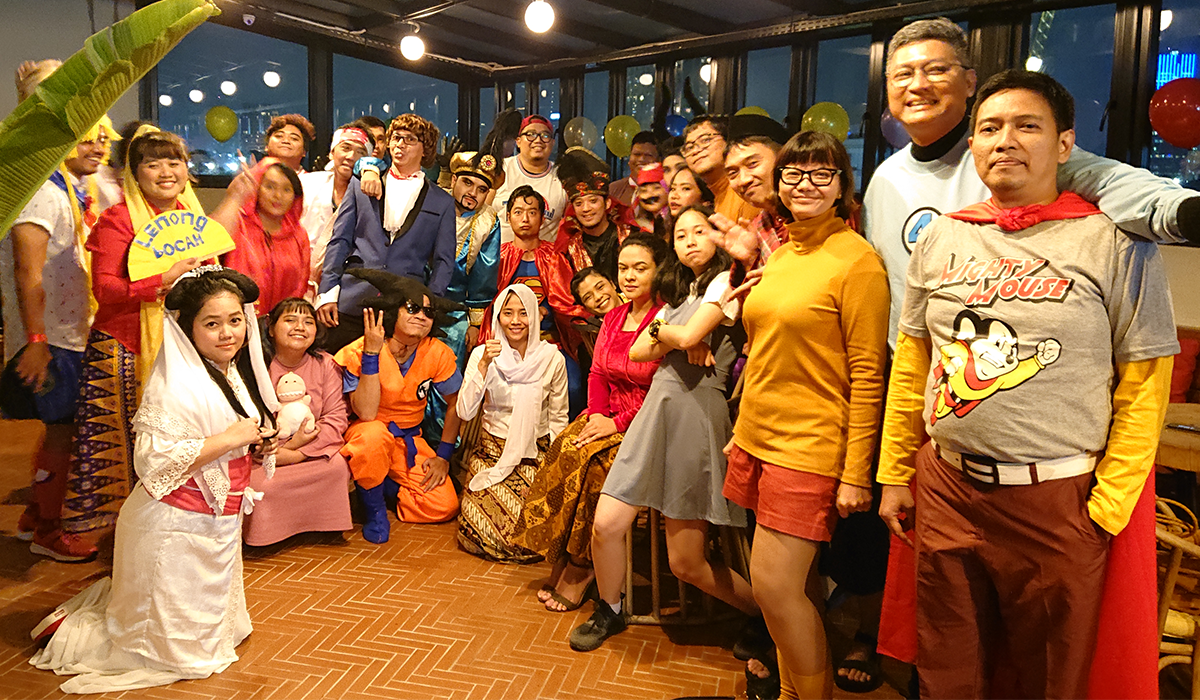 Everyone, including company directors, dressed up for the year-end party

The world has its own rules and some things can be done and some things can’t. These change what we hope to achieve. But be that as it may, we all have the same goal somehow. My three months in Indonesia may have been short, but I gained a big perspective. 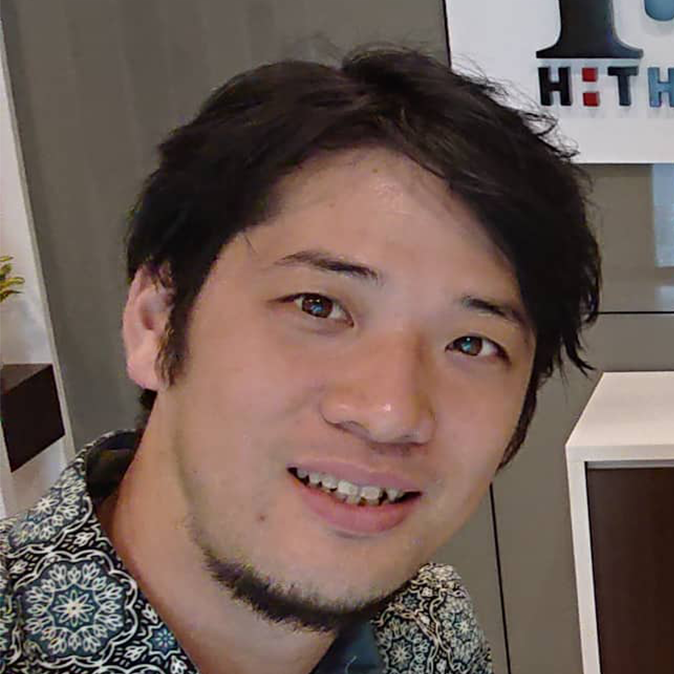