Hakuhodo Institute of Life and Living ASEAN (HILL ASEAN) unveiled its research findings on gender equality in the ASEAN home in Bangkok on December 14, 2017. This is the fourth time that HILL ASEAN has released its annual findings on ASEAN sei-katsu-sha—our term for the holistic person. Here Goro Hokari, Institute Director of HILL ASEAN, reports on what the results reveal about the true state of ASEAN couples today. 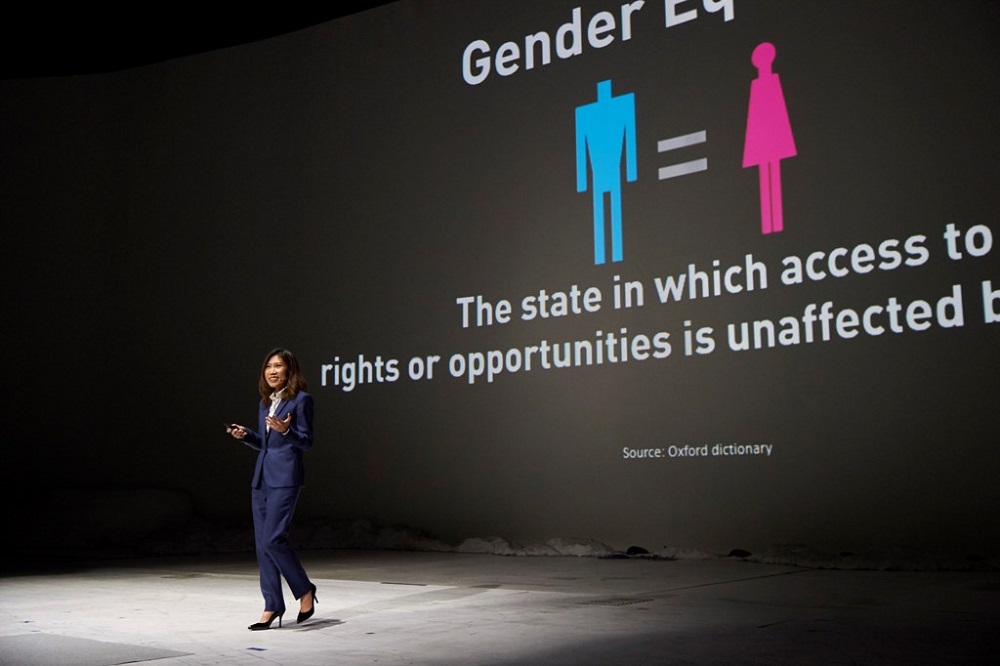 Hakuhodo Institute of Life and Living ASEAN (HILL ASEAN) hosted the fourth ASEAN Sei-katsu-sha Forum in Bangkok on Thursday, December 20, 2017. The topic of the forum was “New Perspective of Gender Equality at Home: Who Rules the House?” More than 400 guests attended, including clients, media representatives, and partners.

Where the ASEAN countries rank in gender equality

Gender equality is a hot-button issue these days.

These rankings suggest that the ASEAN countries still lag behind in gender equality. But does that hold true also of actual ASEAN households? 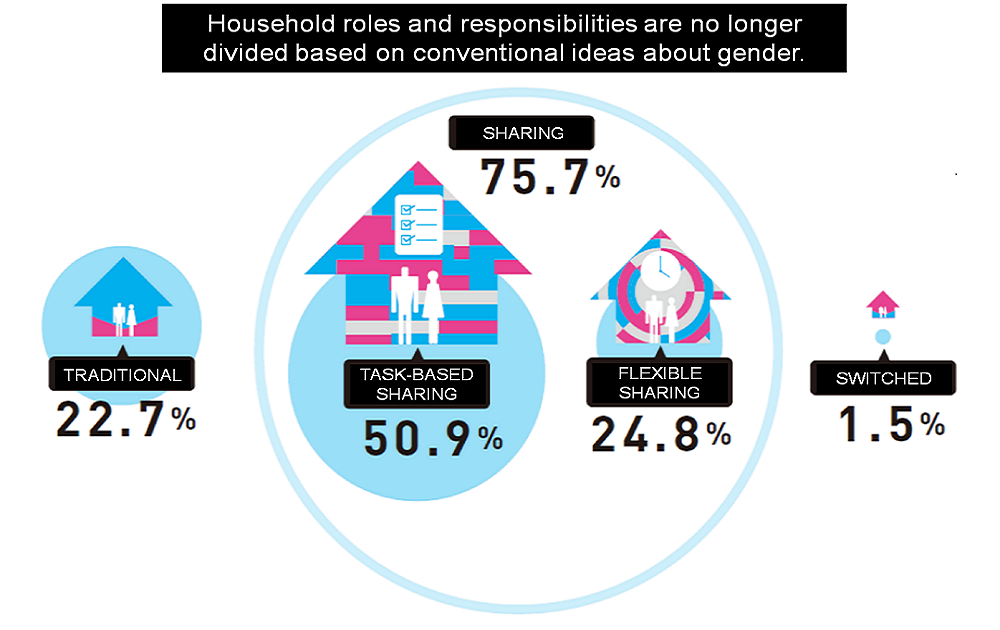 Leaving aside the question of gender equality, when the task-based sharing and flexible sharing types are added together, husband and wife share household and childrearing responsibilities in some 76% of ASEAN households. So the fact is that households in which husbands and wives equally divide tasks between themselves already account for more than half of the total.

Three reasons can be cited for why sharing households are in the majority. First, in the ASEAN region as a whole, over 80% of married couples both work. Second, women have become empowered as attitudes to work and relationships have changed. And third, technological advances have helped blur gender boundaries as more and more people use the Internet and social media for work and childrearing purposes.

How satisfied are ASEAN couples with their division of roles and why?

The different types of households were compared to determine how satisfied husbands and wives were in each with their current division of roles—though this is not to imply that one type is “better” than another. Here are their respective satisfaction levels. 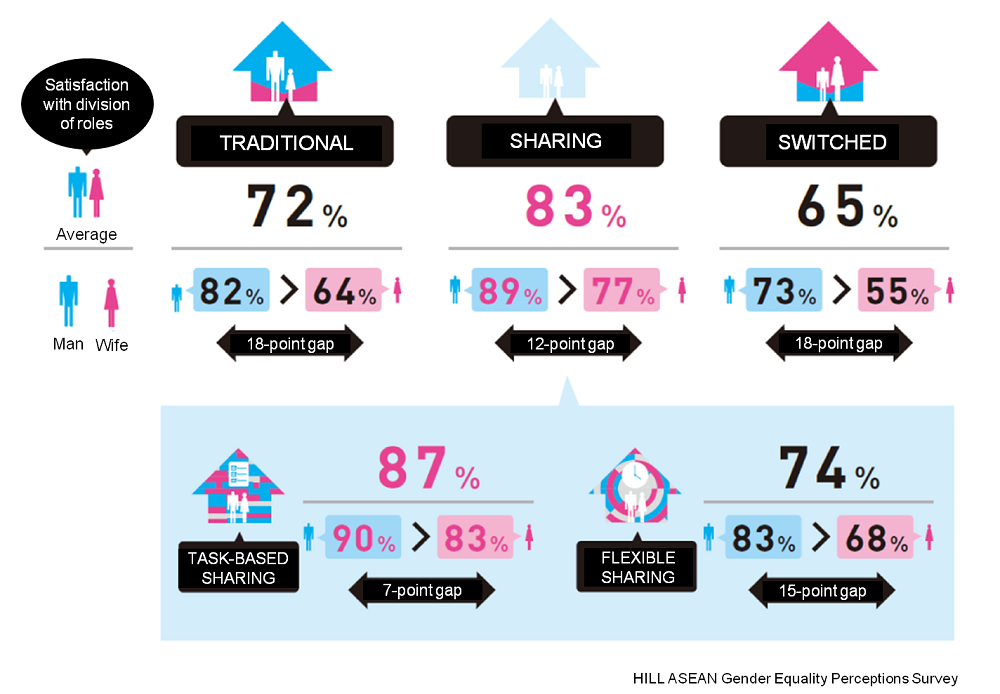 Task-based sharing households are the most satisfied overall and have the smallest gap in satisfaction between husband and wife, though in all types of households husbands are more satisfied than wives.

Where does this difference in satisfaction come from?

Women in this type of household are not very happy with their current role and have a strong desire for change. This is because their husbands firmly believe that the man, as the head of the family, should go out to work, while the woman should look after the home; they therefore seldom help with household chores or bringing up the children. That tends to leave wives dissatisfied.

Wife: “My husband helped a little with the housework when we first married, but now he starts drinking as soon as he gets home at five and goes straight to sleep. The other day he broke his finger while drunk, so I posted a photo of him on social media. I figured it served him right.” (Thailand)

Both parties are highly satisfied with the status quo and strongly desire to continue their task-based division of roles. This is because couples of this type frequently communicate and typically help each other with childrearing and household chores. That results in a high level of satisfaction.

Husband: “We subdivide tasks so we can keep track of who has done what and when.”
Wife: “We’re both so busy that we don’t have time to update each other, so this is a handy thing to have. We also draw up a chart of our travel plans so we can discuss them.” (Singapore)

Both parties basically want to continue flexibly sharing roles, but women are considerably less satisfied with the division of roles than their husbands. This can be attributed to a gap between perceptions and reality. While husbands are strongly committed to sharing in household and childrearing chores, wives in fact bear the heavier burden, which often leaves them dissatisfied.

Wife: “I sometimes wash the car when I have the time.” (Indonesia)

Both parties have a low desire to maintain the switched division of roles, since it is perceived as not being widely accepted in society.

Husband: “When we bought the car and the air conditioner, I swallowed my pride and asked my wife’s opinion. The person up there [pointing upstairs, meaning his wife] usually makes the decisions.”

Wife: “I like getting out of the house. The other day I went shooting, which is my hobby, and blew off stress.” (Indonesia)

The above survey findings reveal that while attitudes to gender equality vary considerably among the ASEAN countries, couples equally share household and childrearing responsibilities in the majority of households; and the more equally duties are shared, the higher the level of satisfaction.

In order to capitalize on these findings as a source of new perspectives, HILL ASEAN recommends that marketers (1) try strategically targeting sharing households; (2) focus on the fact that purchasing decisions are made by husband and wife together; and (3) consider targeting couples in their marketing communications.

What type of couple are the strategic customers who you most want to buy your products? What decision-making process do such couples follow? Those are the kind of questions that companies should be asking themselves when marketing to the ASEAN region from now on.

That brings to an end our review of our latest survey findings. What type of household do you belong to? HILL ASEAN will continue to undertake new and challenging initiatives like this, so stay tuned. 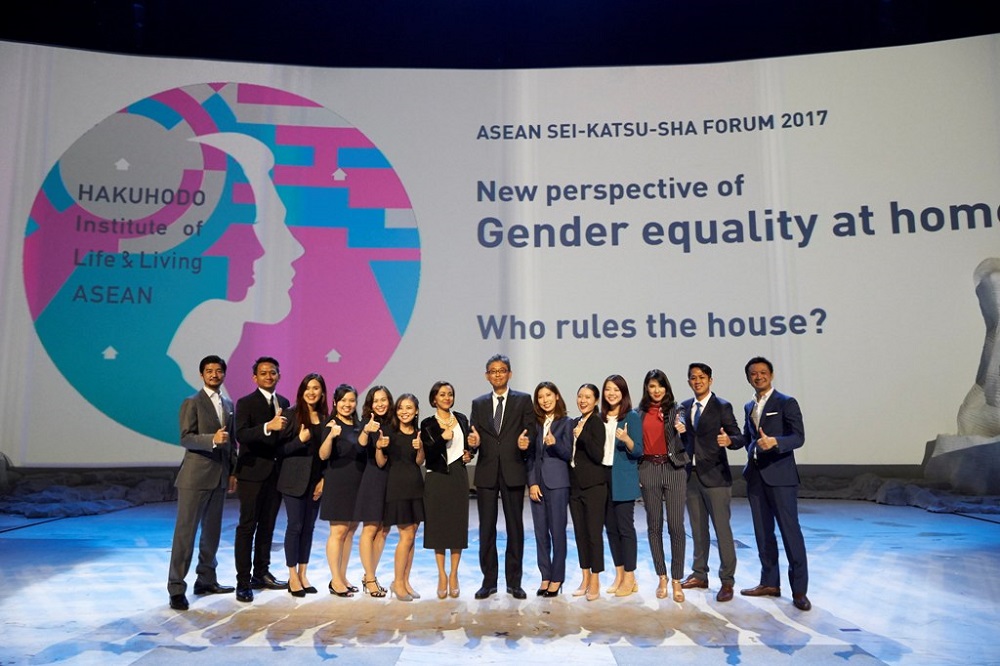 The members of Hakuhodo Institute of Life and Living ASEAN 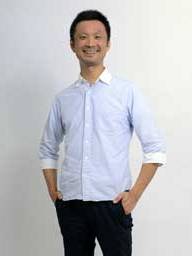