For Japanese and other outsiders working in the ASEAN region, the Southeast Asian attitude to time can seem a little unusual. You may have found yourself wondering:

“Company meetings never start on time. Just how late is too late for these people?”

“We’re already well into January and the Christmas tree is still up. When will it finally be taken down?”

“A new tenant is renovating and there’s a ‘Coming soon’ notice up, but the job shows no sign of being completed. Just how long do they think ‘soon’ means?”

And those are just a few examples. Thus attitudes to time differ from country to country. For its first issue, therefore, ASEAN Sei-katsu-sha Magazine decided to examine ASEAN sei-katsu-sha’s sense of time. 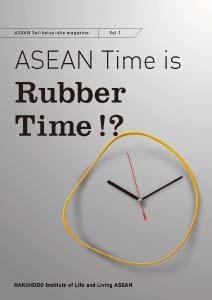 “Time is money” is a familiar phrase in Japanese as in English, but in several ASEAN countries people speak rather of “rubber time” (jam karet in Indonesian). This phrase implies that time, like rubber, can be stretched and shortened and bent, so just stay cool.

We therefore decided to conduct our own survey to determine how flexible rubber time was in each of the ASEAN countries. To that end we asked two questions. Having arranged to meet a friend at a certain time:

“How long would you wait for them?”

“How long would you feel it’s okay to keep them waiting?”

Even more interestingly, Indonesians would wait only 27.6 minutes for a friend (upper half of the blue box in the illustration). Thus they’re the only people in the five ASEAN countries who feel entitled to keep friends waiting longer than they’d wait themselves.

Thus in Indonesia you could well arrange to meet a friend and end up missing each other, since people won’t wait as long as they’d keep others waiting. In fact, when I visited Indonesia on business, a Japanese living there told me that he was once 15 minutes late to meet someone, so the other person started watching a movie and conversely kept him waiting for two hours.

To corroborate this quantitative research, we also conducted an experiment. One of a pair or group of friends who had arranged to meet was asked to deliberately arrive an hour late, and the behavior of both the party waiting and the person keeping them waiting was observed.

In the case of Indonesia the person waiting turned up fairly late as well, bearing out the quantitative survey findings (see the illustration below).

What happens if someone intentionally arrives late?!

The following conclusions about rubber time in the ASEAN countries can be drawn from these survey results.

All the details, along with information on the rest of the surveys conducted, are contained in ASEAN Sei-katsu-sha Magazine, Vol. 1, so be sure to have a look. You can download it as a PDF file in either Japanese or English from the “Magazines” section of the HILL ASEAN website.