Hakuhodo Institute of Life and Living Shanghai (HILL Shanghai), a wholly owned subsidiary of Hakuhodo Inc., unveiled its findings on the new Chinese middle class’s enjoyment of the finer things on December 20 and 25, 2017, in Beijing and Shanghai respectively. Once a year HILL Shanghai releases the results of its research on the habits and wants of Chinese sei-katsu-sha—the term Hakuhodo uses in place of “consumer” to mean the holistic person with a lifestyle, aspirations, and dreams—under the title “The Dynamics of Chinese People.” Here Zhong Ming, Chief Researcher and General Manager of HILL Shanghai, describes what the findings reveal about China’s new middle class.

I am Zhong Ming of Hakuhodo Institute of Life and Living Shanghai (HILL Shanghai). HILL Shanghai has for the past several years been conducting joint research with the Communication University of China’s School of Advertising, and in December 2017 it unveiled the project’s fifth set of findings in Beijing and Shanghai. The subject: “Enjoying the Finer Things: New Cultural Consumption in China.”

The explosion in cultural consumption

In China, it has in recent years become commonplace for long queues to form outside exhibitions of artworks from renowned overseas museums. Tickets for theater performances that are being talked about abroad usually sell out in an instant. Visitors to museums and art galleries have doubled over the past five years; the number of cinema screens has increased 4.5-fold. These figures indicate how rapidly the market for culture has expanded in the past few years.

But is culture restricted to appreciation of the fine arts, music, and other aesthetic pursuits?

The number of Chinese coffee drinkers has soared of late. Insisting that your coffee be brewed a certain way, and enjoying a few blissful moments savoring it, is surely also a form of culture. Over the past several years there has been an increase in people who regularly visit the gym or practice yoga. It is, I believe, fair to use the term “culture” to describe the exhilaration of working up a sweat, and the pleasure of leading a mentally and physically fulfilling lifestyle by staying active. Video game and anime aficionados are also multiplying, and not just among the young either. That has led to the emergence of fan communities. Video games and anime, too, may reasonably be described as forms of culture. 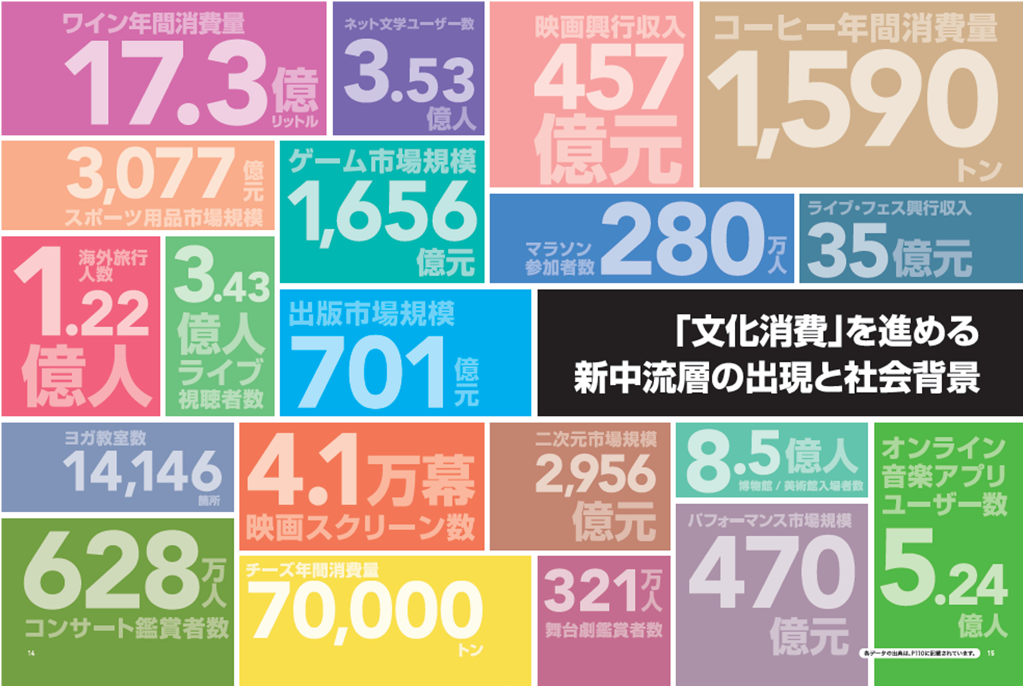 One factor driving cultural consumption is greater affluence. China’s per capita GDP crossed the US$8,000 mark in 2016. Meanwhile the new middle class* is growing. It numbered 320 million in 2017 and is forecast to reach 480 million by 2022. The middle class is defined as individuals with a household income of US$9,000-34,000, and people at the upper end of that bracket, whom we classify as the new middle class, are on the increase.

But is greater affluence the only factor driving cultural consumption? We have concluded that besides the growth of the new middle glass to 300 million, there are several social factors at work relating to the state of China today: a shift in people’s interests to culture as economic growth has slowed; a massive influx of cultural information due to increasing globalization and advances in digital technology; and the extra push provided by the government’s policy goal of turning China into a cultural giant.

Cultural consumption takes many forms. We focused specifically on distinctive types of cultural consumption that have become pronounced over the past several years, and interviewed Chinese sei-katsu-sha who actually engage in them. Here I will describe the seven consumption trends that we identified as a result.

An increasingly common form of cultural consumption is using high-quality, tasteful items in everyday life:being a stickler for stylish stationery, for example, or buying enamelware that’s not only highly functional but also beautifully designed.

Ms. Zhao (33), who works at a foreign-owned company, spent over 2,000 yuan on enamel cookware. She told us, “Before I would spend money on stuff that others would see, like the handbag I took to work, but it never occurred to me to pay lots for the dishes and pans I used regularly. Now, though, I also spend money on the things I use every day. Not only do they have to be eminently functional, I’m really picky about the design. I’m particularly fond of cooking, so I want to use kitchenware that appeals to me personally. I’m in sheer bliss when I’m surrounded by my kitchenware.”

Having fun learning the story behind a product or item that intrigues you is another form of cultural consumption that has become prominent in the last year or two. Visiting a factory or industrial museum when traveling abroad, for example, has been popular for the last little while.

Mr. Chen (31), who visited a whisky distillery in Japan, recalls, “I started drinking whisky because it kind of seemed like a cool thing to do. As I tried different brands, I started to realize the difference in flavor, and I became interested in how whisky was made. Seeing the actual production process at the distillery and listening to it being explained has deepened my appreciation of whisky’s flavor.”

Over the past year or two there seems to have been an increase in people taking up French or starting oil painting or a musical instrument as a hobby, even though such pursuits are not directly related to their work.

One of them is Ms. Zhou (30), who recounts, “I’m interested in art and design, and I’ve started studying online. I used to study English, which would be useful on the job, but everyone around me was studying the same type of thing, so I began thinking I should master something that would give me an edge. So I began studying art history, which has long interested me. That’s not of course going to be of immediate benefit in my present position, an office job at a manufacturing company, but it may prove handy somewhere or other in the future. Plus being considered knowledgeable about art would be cool, like I’m a person of culture.”

There has of late been a surge in cultural events where people with common interests come together to share in the excitement, like so-called 2.5 dimensional events and e-sports events.

Mr. Li (25), who was attending an anime song event, told us, “The spread of the Internet means you can make lots of friends who share the same interests, but it’s more fun to meet people in person and play. You make even more friends by taking part in an event like this, but that’s not all. It’s great fun to be one with the crowd—to get carried away in the excitement and, at the risk of sounding exaggerated, create something together.”

There’s a person at our office who enjoys brewing a cup of pour-over coffee each morning, starting with grinding the beans in a hand grinder. There’s another person who goes around with a portable tea flask and loves a leisurely cup of tea, even when on a business trip. The market for such coffee and tea accessories is expanding.

“There’s a coffee chain location on the ground floor of our office building, and if you want a coffee, all you have to do is buy it there, but I like grinding the beans myself and carefully brewing a cup,” says Ms. Liu (27). “Having those leisurely moments before work, I feel, lets me switch gears and get smoothly into work mode. It’s part of my morning routine.”

Chinese sei-katsu-sha have typically shown a strong preference for products featuring the latest technology. Over the past year or two, however, the word “craftsmanship” has become something of a buzzword, and things that are not cutting-edge or high-tech are back in the limelight.

Mr. Lin (37), a worker at an IT company who had his shoes custom-made by a shoemaker, relates, “It all started when I decided to purchase a pair made to order, because I dislike stuff off the assembly line. But when I actually had my shoe size measured and saw the shoemaker at work, I became completely enamored of that warm, human quality that only handmade items have.”

A new design sensibility combining things quintessentially Chinese with fresh elements has taken root around town and in people’s lives. Over the past several years there’s been a growing interest in furniture possessing a “modern Chinese design”: basically Chinese in character but with a contemporary twist. And at Chinese restaurants, wine bottles line the walls, jazz plays on the speakers, and the dishes themselves consist of traditional cuisine with Western ingredients added.

Ms. Zheng (27), a lover of such furniture with a modern Chinese design, told us, “I used to admire foreign-designed chairs and tables, but when I saw furniture designed in the modern Chinese style, it struck me as something completely new. I’m Chinese myself, and I like things Chinese. And when they have a modern twist to boot, they look really appealing. I plan to look for more such designs.”

A survey of these seven trends that characterize cultural consumption reveals certain traits of those who engage in it. In seeking to educate themselves, they have no specific goal in mind. They enjoy the slow life and go out of their way to spend time on things. They value craftsmanship and the time that goes into it. And they delight in the superfluous and time-consuming. What underlies these traits, we have concluded, is a desire for the leeway (yú) to take pleasure (lè) in expanding their emotional and intellectual horizons. We have combined those two Chinese words into a neologism, Yúlè, to describe what they seek: enjoyment of the finer things in life. Instead of pursuing what others might consider efficient and convenient by conventional standards of utility, they are true to themselves, and find meaning in enjoying the inessential and spending time and effort on it.

We have examined how the new middle class is spearheading cultural consumption in China and stands poised to engender new forms of it. Chinese sei-katsu-sha, especially the new middle class, are not mere consumers of products and services; they are increasingly attuned to the culture underlying them. That affects their overall lifestyles, including their information behavior and shopping habits. We at HILL Shanghai intend to continue studying the attitudinal and behavioral changes brought about by their enjoyment of the finer things. Stay tuned!

*Defined as individuals with an annual household income of US$16,000-34,000 based on McKinsey data. 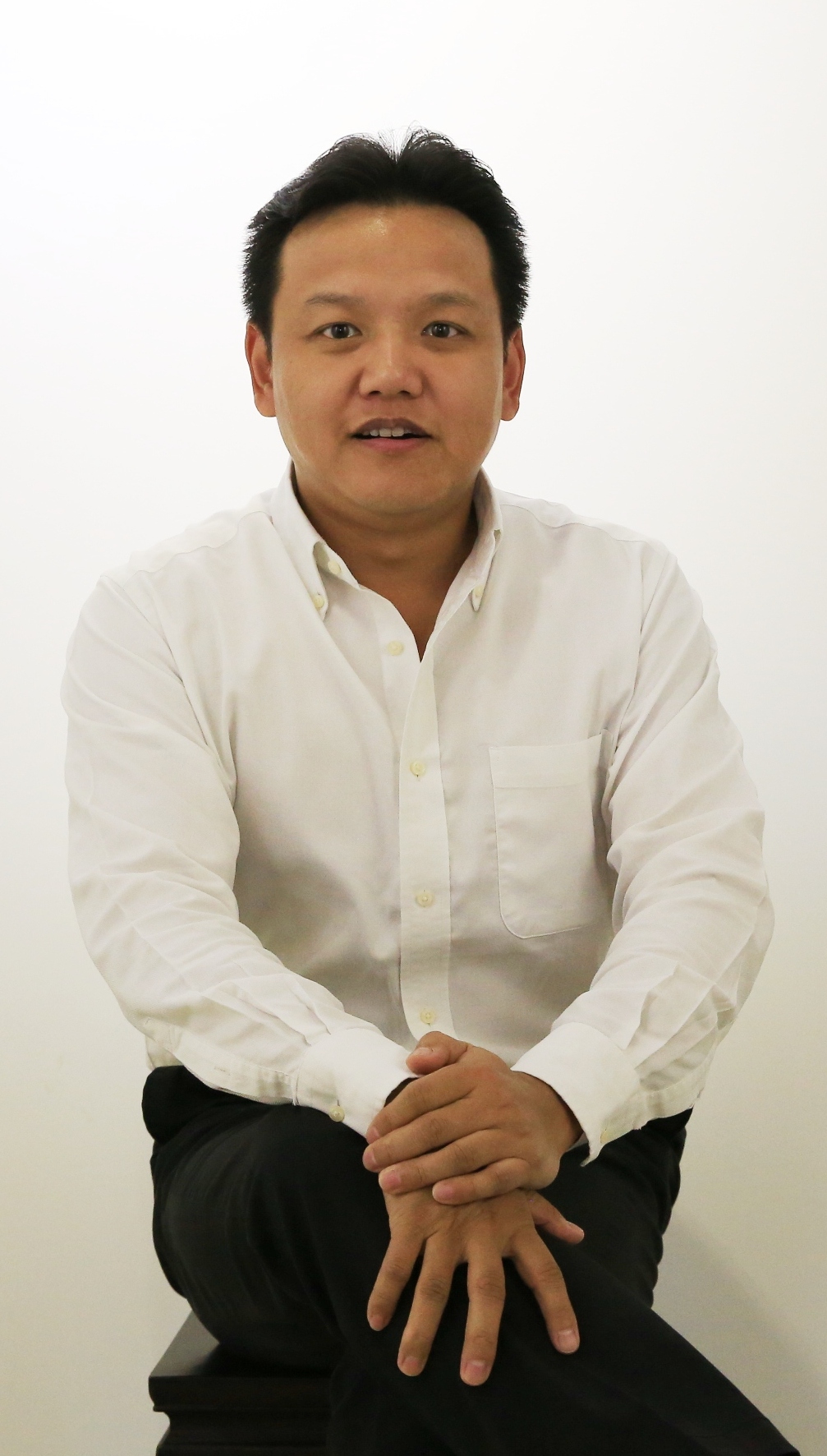 Zhong Ming
Chief Researcher and General Manager, HILL Shanghai
1998 Becomes a copywriter at Hakuhodo C&D.
2002 Is transferred to Hakuhodo, where he works as marketing planner in a wide range of sectors including automobiles, luxury items, beverages, and cosmetics.
2012 Relocates to Shanghai with the establishment of Hakuhodo Institute of Life and Living Shanghai (HILL Shanghai), where he engages in research, gives talks, and offers brand consulting services.
2016 Appointed General Manager of HILL Shanghai.
SHARE
Back to News & Insights