Not looking for answers 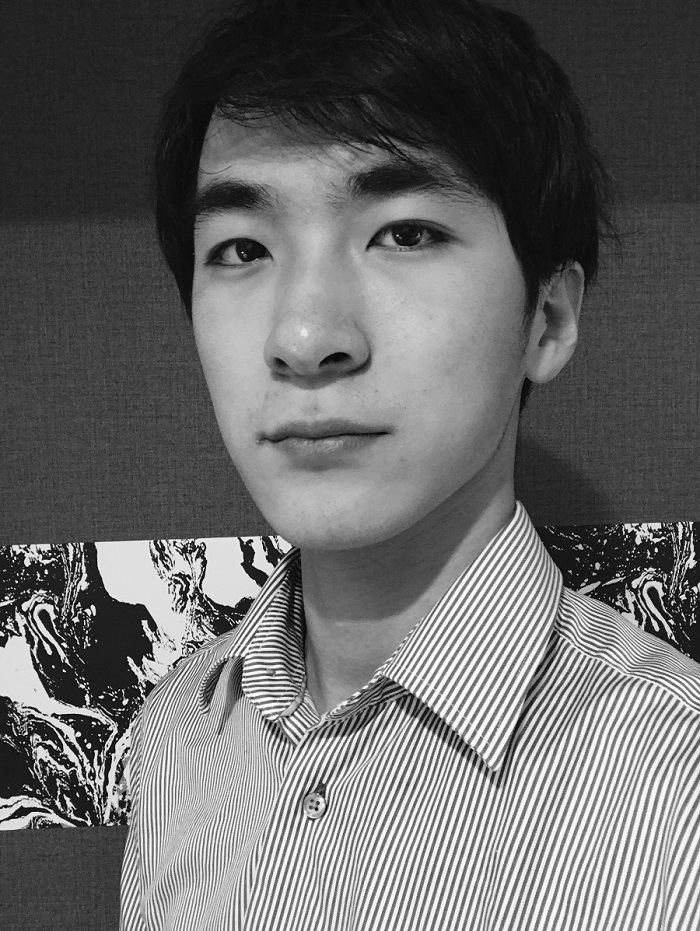 Seikatsu Teiten is a proprietary fixed-point observation survey conducted every other year since 1992 by the Hakuhodo Institute of Life and Living. The results of the 2016 survey were recently released and the website has been updated. Seikatsu Teiten Survey — My View is an essay series in which different authors share insights and discoveries resulting from their analysis of the Seikatsu Teiten data.

The season when you hear Christmas songs at every street corner is here. It’s December, and the end of the year is fast approaching. Stop and look around, and you can’t help thinking there’s a high percentage of couples among the crowds milling about. When did it become the custom in Japan for lovers to spend Christmas together? I’m in my twenties, and spending Christmas with your sweetheart has been the norm ever since I can remember—though I myself usually spend it alone.

A new term has recently arisen in Japanese, kuri botchi, to describe spending Christmas (kurisumasu) alone (hitoribotchi). According to Hakuhodo’s timeline of contemporary Japanese, the term botchi (a shortened form of hitoribotchi) meaning “lonely” or “loner” is first attested around 2014*, so kuri botchi, evidently a derivative, must have started being used around the same time. What a forlorn-sounding word!

More people, perhaps, are enjoying Christmas alone these days, since a bevy of services have sprung up for the unaccompanied customer. If that’s indeed the case, maybe it’s more acceptable than it used to be to spend the special day by yourself. With that in mind, I turned to the dedicated Seikatsu Teiten website.

When asked what special occasions they had celebrated over the past year, some 60% of respondents answered Christmas. Thus it seems that the majority of Japanese celebrate Christmas. 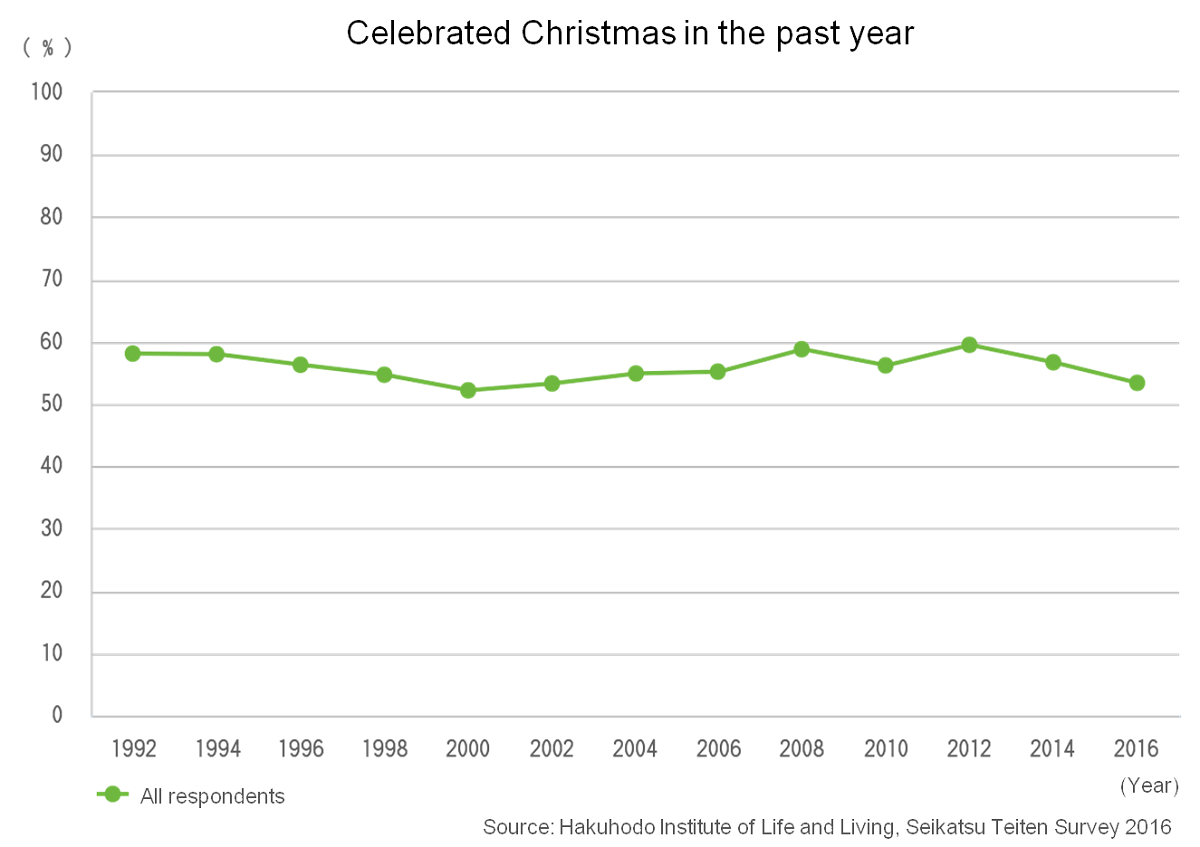 But when you look at the figures by sex and age group, you notice a sharp decline among males 20-29—indeed the sharpest decline of any cohort. 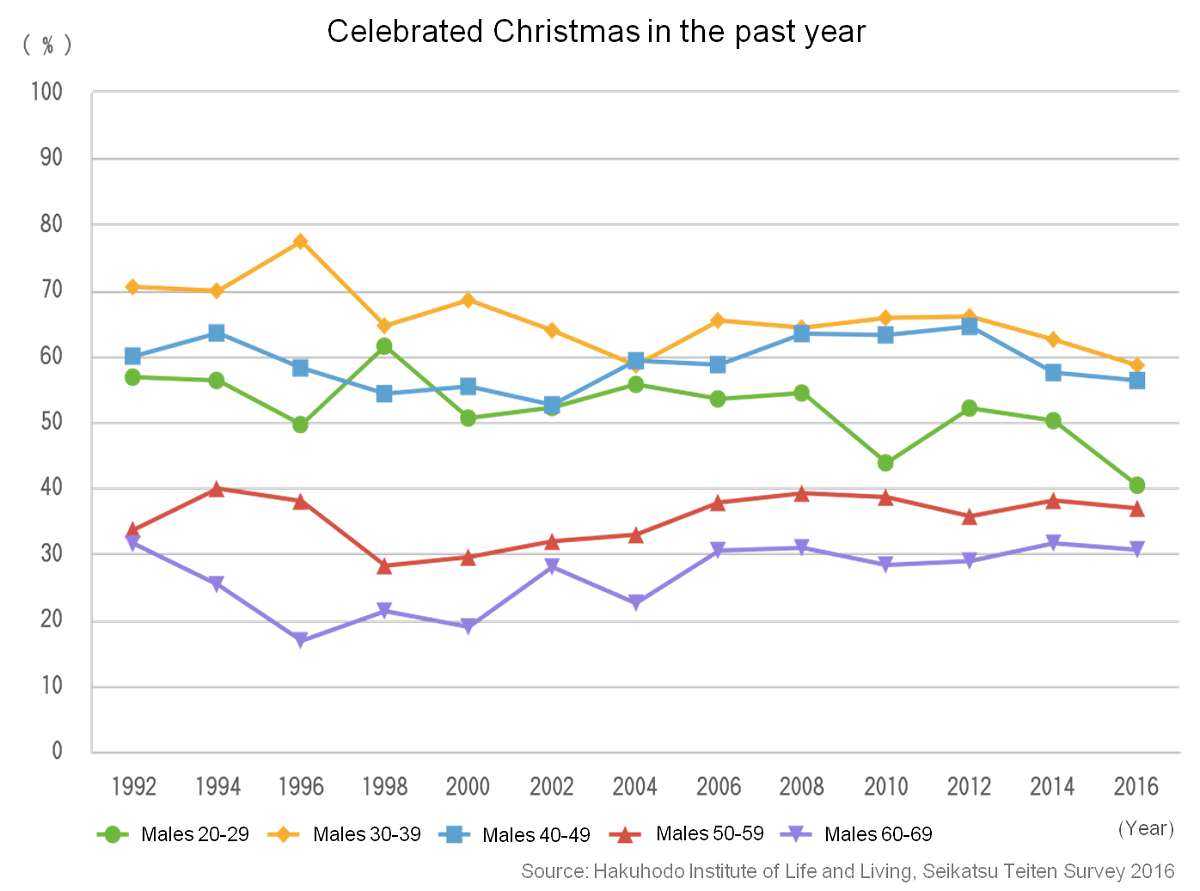 So it’s not just a question of whether people who celebrate Christmas alone enjoy it. Doesn’t this data suggest that males in their twenties have lost interest in Christmas altogether? This trend is characteristic of my own age group, so let’s investigate further.

Consider the question from a different angle. Under “Things you want to spend more time doing,” for example, how has the percentage changed for “Spending time with close friends”? If an increasing number of men in their twenties want to spend more time with close friends, then they might well cease to celebrate Christmas altogether, since in Japan Christmas is apparently assumed to be for spending with your sweetheart. 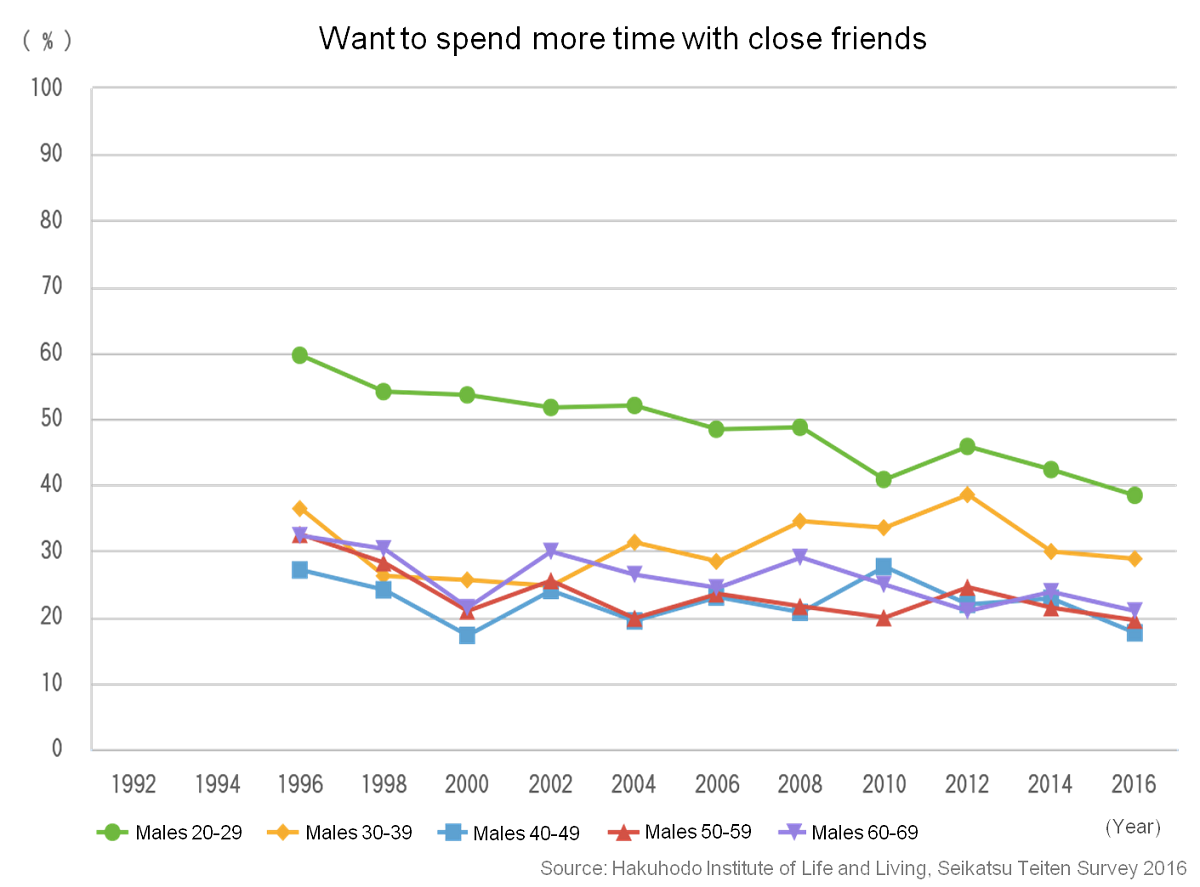 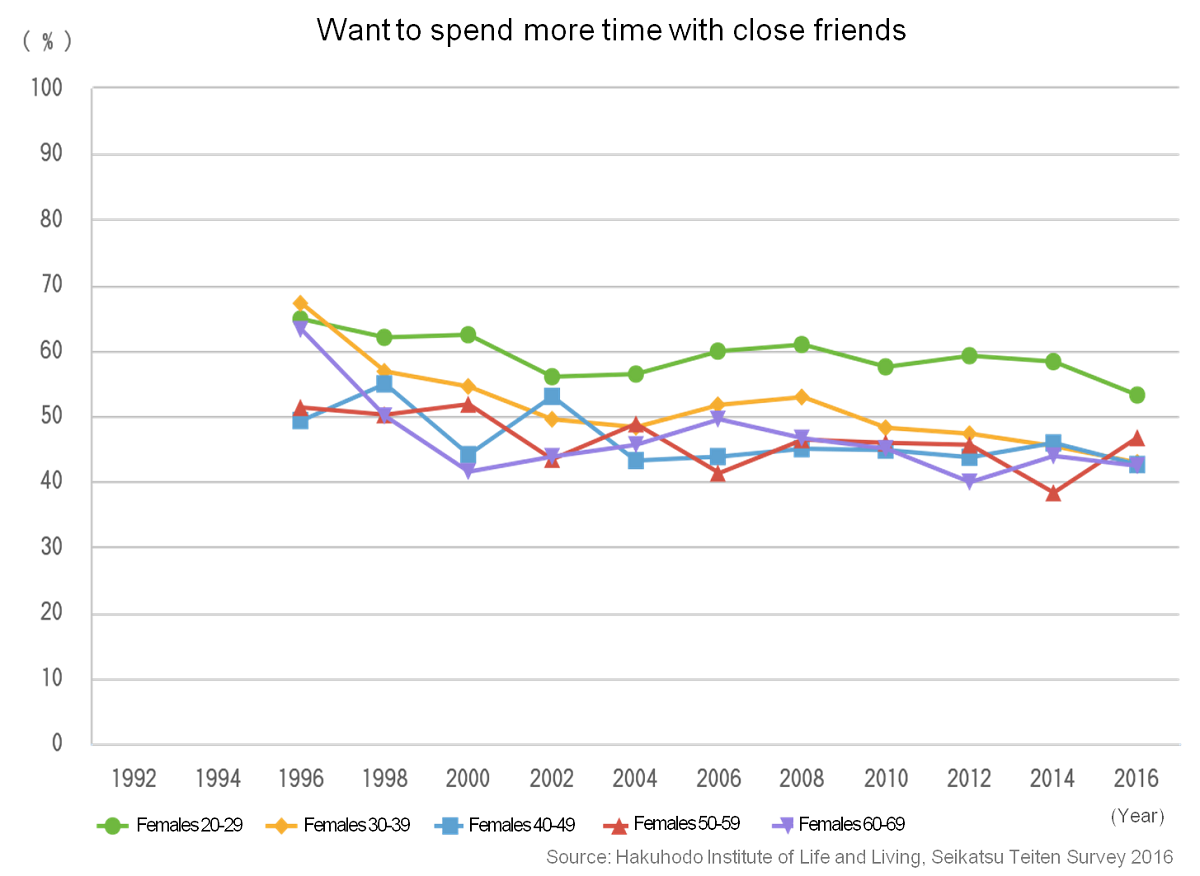 But contrary to expectation, the percentage of males aged 20-29 has plummeted in this category. Apparently they’re not particularly interested in spending more time with close friends either.

I was completely baffled. Then I happened to notice another graph.

The percentage of females aged 20-29 wanting to spend more time with close friends has also decreased, but much less so than among their male counterparts; they still record the highest percentage of any cohort in this regard. (The decline among women in their twenties between 1996 and 2016 is roughly half that among men in their twenties.) Furthermore, the percentage of females celebrating Christmas has remained consistently high over the past decade compared to that of males. Perhaps Christmas today in Japan isn’t so much an occasion for couples to spend together as for the girls to get together and party, and young men are given the cold shoulder—hence their waning enthusiasm for Christmas.

But I’ve let my imagination carry me away. My original goal—to ascertain whether the number of people enjoying Christmas on their own has indeed increased—completely slipped my mind. That, in my personal opinion, is one of the great things about the Seikatsu Teiten survey.

Most of the survey data available out there merely suggests an answer to an unknown; but I feel that the Seikatsu Teiten survey, while pointing to an answer, also tends to get you asking more questions.

You might not always find the exact answer you were looking for, but perusing the data can spawn a new hypothesis that you have never thought of before, which can be gratifying in its own right. So why not try using the Seikatsu Teiten data not to look for answers?

A Merry Christmas to you all you.