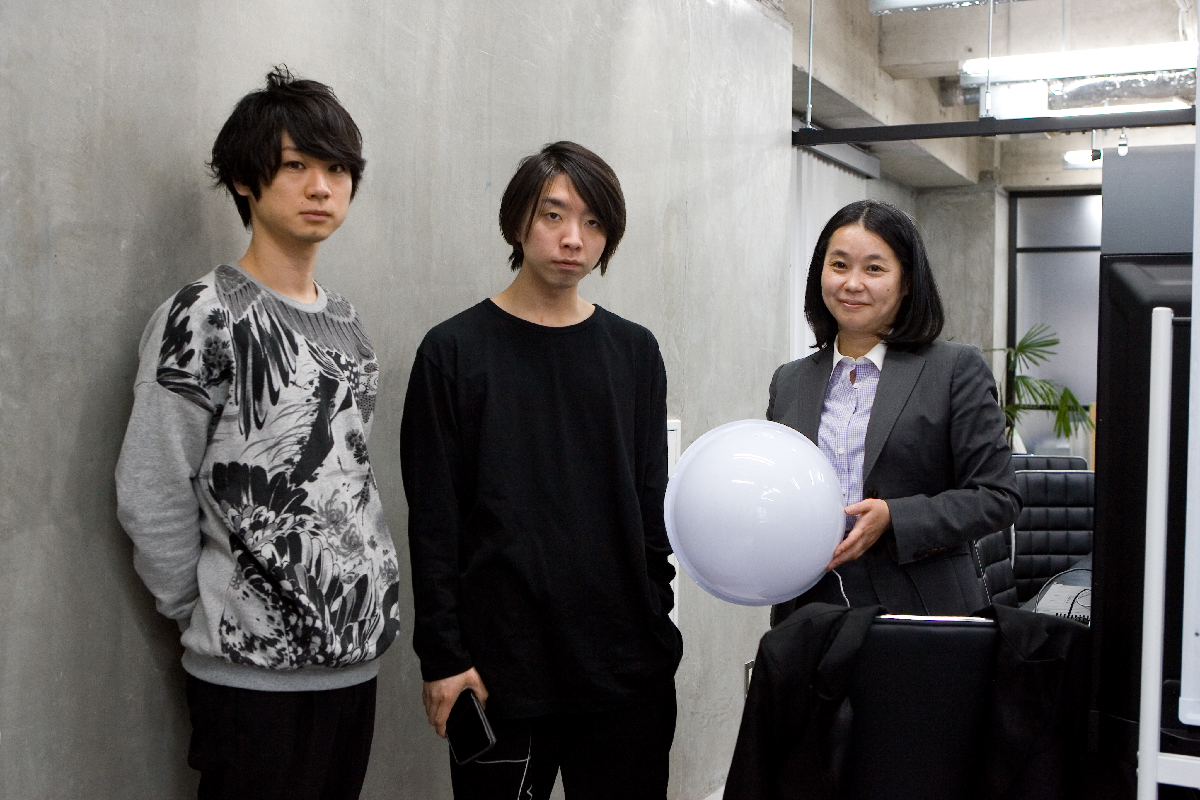 The Japan Philharmonic Orchestra will host a “sound-free concert” on April 22, and Hakuhodo has developed a new hi-tech hearing aid system for it in partnership with Pixie Dust Technologies, which is headed by media artist Yoichi Ochiai, Assistant Professor at the University of Tsukuba.
(See further http://www.hakuhodo.co.jp/archives/announcement/45283 [in Japanese].)
Here Yoichi Ochiai, who last year worked with Hakuhodo on development of the Orchestra Jacket, talks with Junko Yamagishi of the Japan Philharmonic Orchestra and Hakuhodo’s Masatoshi Usami talk about this unusual collaboration between media artist, agency, and orchestra. How did it come about? What did they pay particular attention to in designing this completely new, interactive form of concert that people with hearing disabilities can enjoy too? And how might it evolve in the future?

YAMAGISHI: Besides giving concerts, the Japan Philharmonic Orchestra has long worked to share the joy of music with people of all stripes through its educational and community programs. Two developments in particular gave rise to the upcoming Sound-Free Concert. 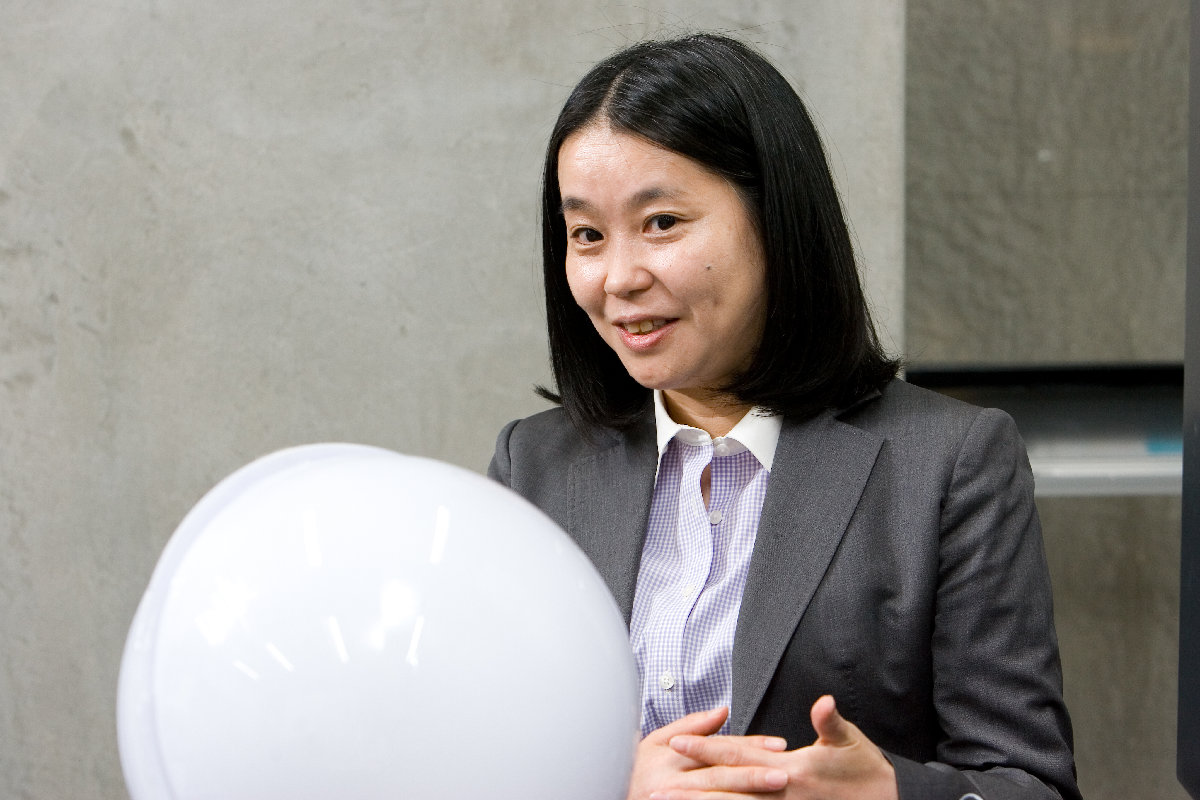 First, I myself experienced the Orchestra Jacket unveiled by Ochiai-san and Usami-san last April, and I was mightily impressed. I tried it on at the exhibition, and I was just stunned at how incredible it was, so I started wondering whether there was something we could work on with Ochiai-san and Usami-san. Second, deaf soccer player Kento Nakai commented on social media about his own experience trying on the Orchestra Jacket. “We were dancing to the rhythm before we knew it.” “Music isn’t relevant to us, yet we kept saying to each other how much we’d love to have one.” I later met him, and he told me how much the experience had moved him. So I thought I’d just love to do the same in the form of a concert. 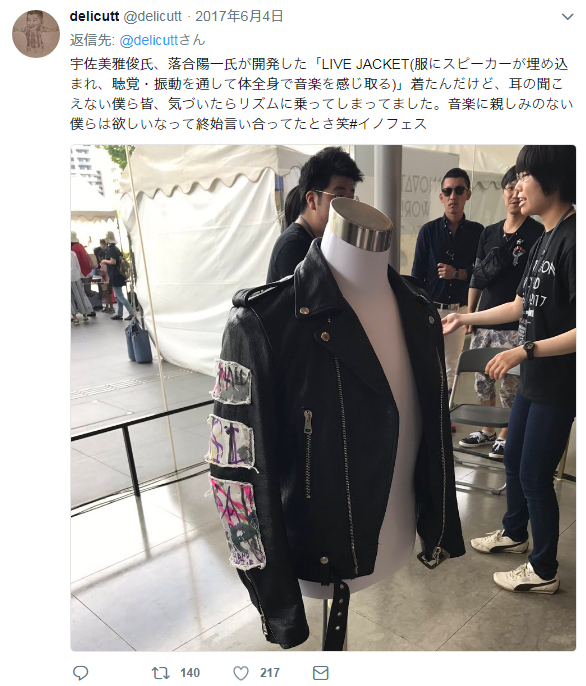 The tweet from Kento Nakai with which it all began

USAMI: I shared that tweet with Ochiai-san, and the project got off the ground in earnest last fall. There are only two Orchestra Jackets in the whole wide world, and it can’t easily be mass-produced. Another problem was that for operational reasons, experiencing it takes manpower and time. So we started by discussing what to do. The idea came up of vibrating balloons with air so the audience could feel them, and then the discussion really took off. With balloons, we agreed, you don’t have to spend a fortune on materials, and lots of people can take part in the experience. And so, with a bit of imagination, we came up with the Sound Hug. The Sound Hug, which might be called a stripped-down version of the Orchestra Jacket, is a balloon-shaped device that transmits tempo and rhythm through vibrations and changing colors. If you’re hearing impaired, you experience the concert by holding it in your arms and, as the name suggests, literally hugging the sound.

OCHIAI: In designing the concert we also enjoyed the assistance of Fujitsu, in the form of device by the name of the Ontenna. We succeeded in enlisting the support of Fujitsu’s Tatsuya Honda, who is constantly working on ways to improve the musical environment for the disabled. I’d previously collaborated with him on a project on physical diversity for the Japan Science and Technology Agency (JST).

YAMAGISHI: To be honest, I suspect that the musicians on stage will have no idea what’s going to happen until they actually experience it. We’ve given a lot of performances at special needs schools and elsewhere, but only some of the audience members had hearing disabilities. This is the first time that the audience will consist primarily of the hearing impaired, so we haven’t a clue how they’ll feel about it. We’re really looking forward to it. 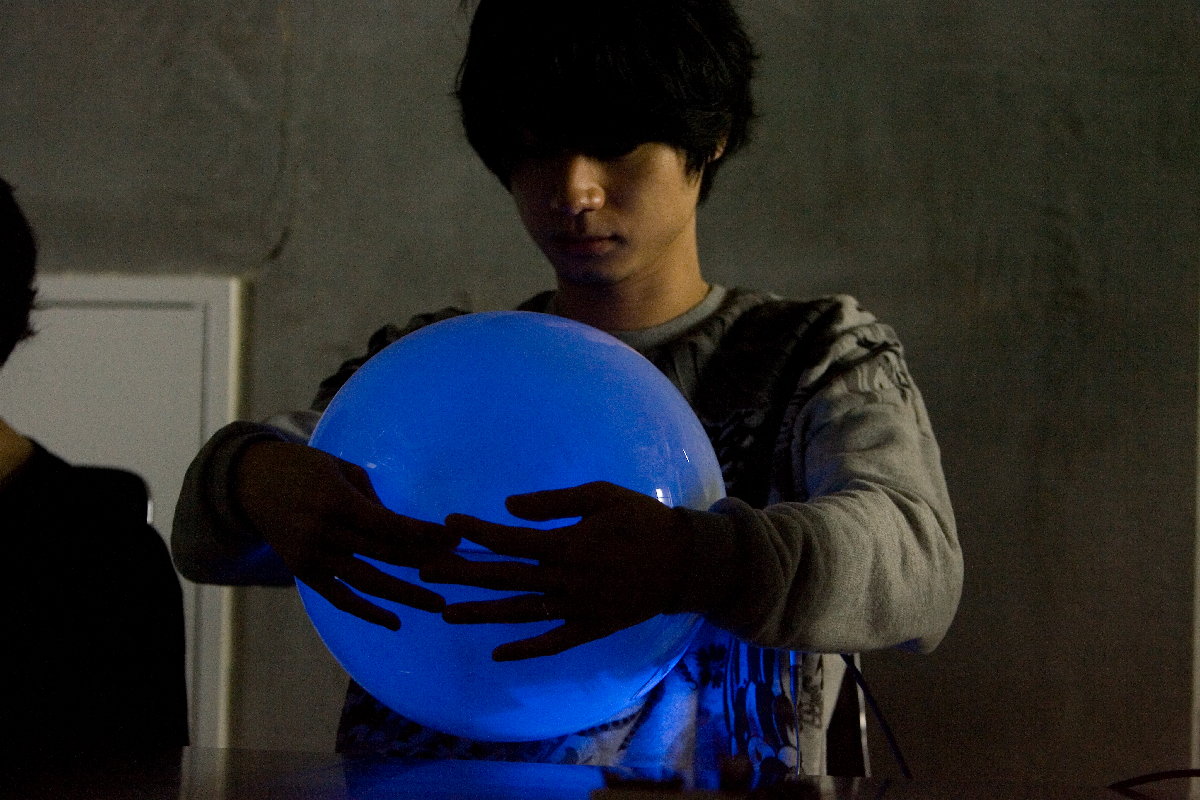 The Sound Hug, which was newly created for the concert. It changes color depending on the sound.

OCHIAI: The word “deaf” itself is in fact misleading. Most hearing-impaired people have what in the case of vision would be called astigmatism: they do to an extent have a blurred perception of things. So if they only detect frequency bandwidths in the core range at which they can hear, will the performance still work as a piece of music? That’s still an unknown. To rephrase the question, if, conversely, they hear something at that bandwidth that doesn’t work as a piece of music, will they still enjoy it? If any of it is blurred, as if it’s been pixelated, will they find it fun to listen to in that form? That I think is the crux of the matter.

USAMI: Plus a sound range that’s audible to one person may be inaudible to another. We’re currently getting feedback on that issue with the cooperation of Kayoko Yamamoto, a teacher at Special Needs Education School for the Deaf, University of Tsukuba, and her students.

OCHIAI: The students, I imagine, find it all very interesting, but what we need to concentrate on is how to transfigure that interest into fun. I have a hunch that maybe half the audience will find the bonding experience of creating something together as a crowd entertaining. The key question is how we capitalize on that. 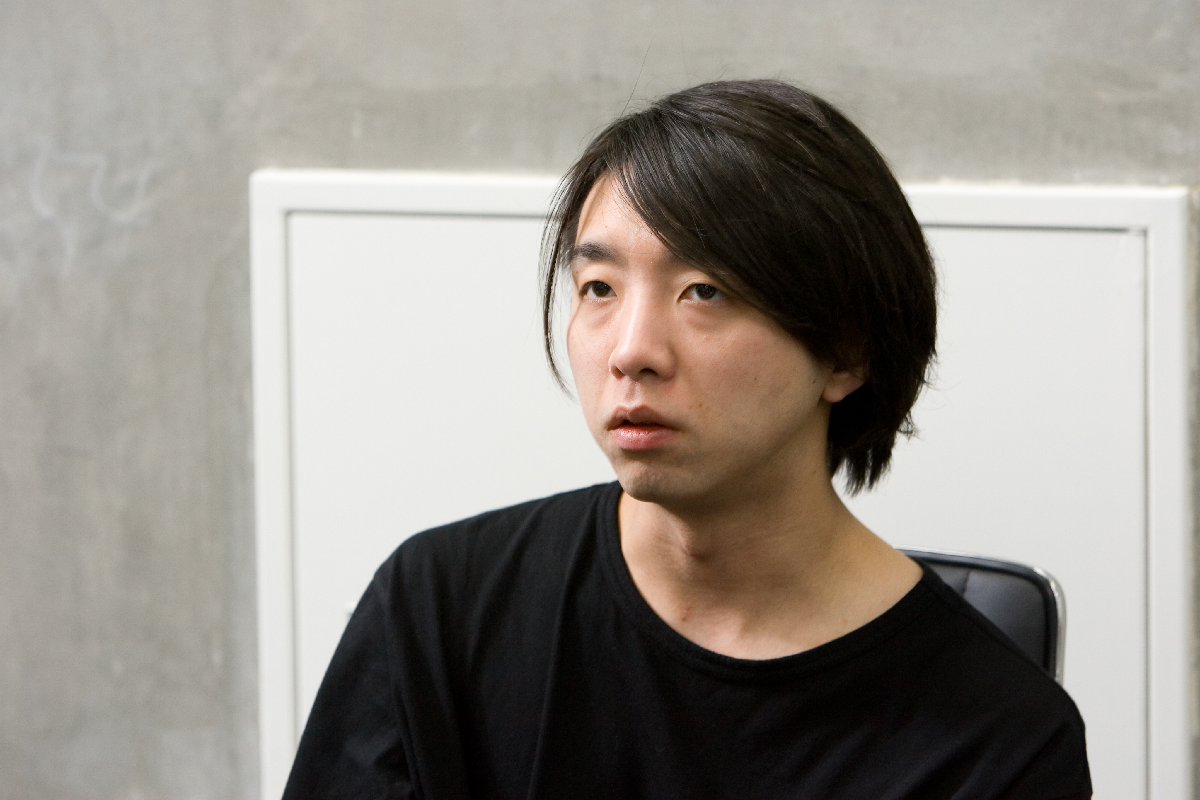 YAMAGISHI: Your point is well taken. I agree that the psychological element is extremely important. Much of the audience, being hearing impaired, will have had almost no opportunity to experience music or develop an interest in it. Hopefully the experience of all being in the same place listening together will lead them to embark on something new.

USAMI: Really symbolic for me was what one hearing-impaired woman said when she was being interviewed by a certain media outlet about her impressions of the Sound Hug. She answered, “It makes the world bright, like turning a black-and-white world into color.” It would be just great if we could make that happen for everyone in the audience. 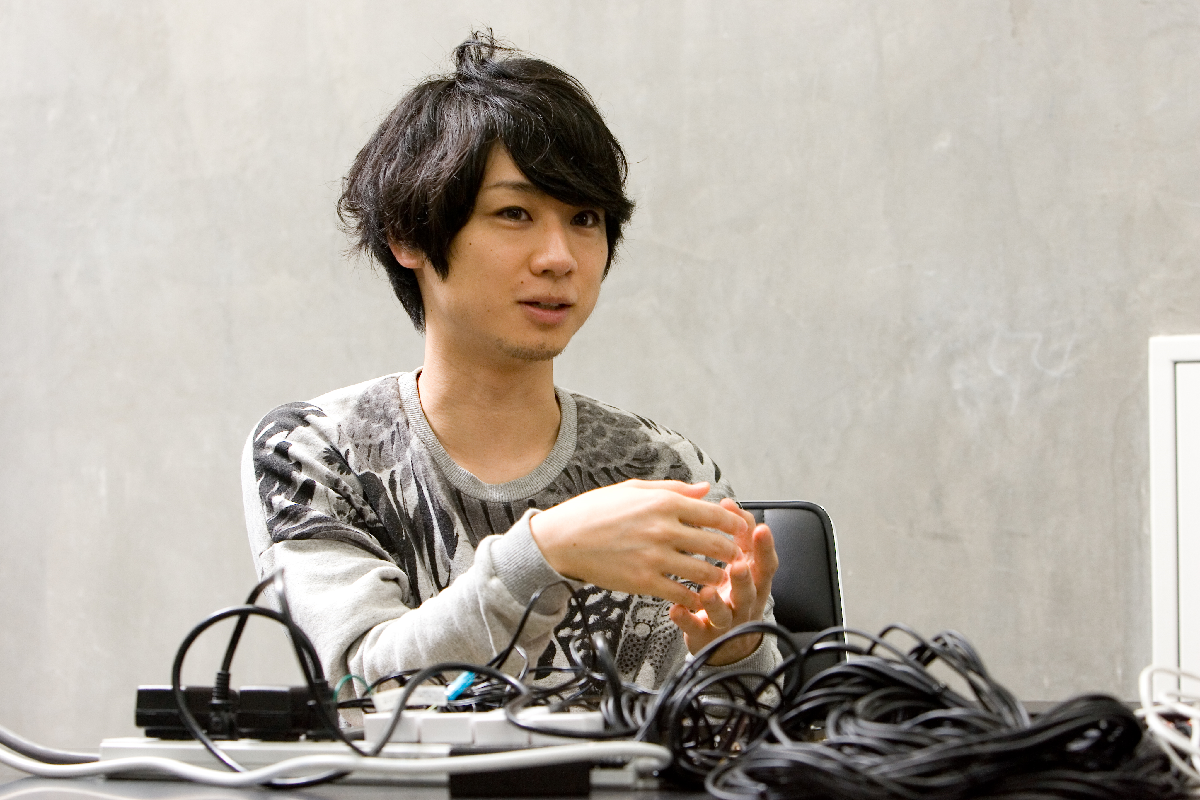 Hakuhodo’s Masatoshi Usami, with the Orchestra Jacket equipment in the foreground

YAMAGISHI: The music industry is extremely interested in the concert, because it’s an unprecedented initiative in two ways. For starters, it’s the first collaboration between Ochiai-san and the Japan Philharmonic Orchestra. And it’s intended primarily for the hearing impaired.

USAMI: I get the sense that the project itself is snowballing as all sorts of people join in of their own accord in pursuit of a common goal.

OCHIAI: In the way of reaction to the project, I imagine the kind of people who keep track of the Japan Science and Technology Agency (JST) must be pretty interested; and besides, there must be a lot of people who simply want to see something they’ve never seen before. Actually there have been people in the past who have had a go at the same type of thing, like dance music producer Martin Garrix, who put on a concert for the deaf. But we’re probably going about it with a completely different logic. We’re asking ourselves how to use technology to capture the very nature or aesthetic of an orchestra—a collection of different instruments, each with its own distinctive timbre, all playing in harmony. You could say that we’re engaged in the task of exploring the orchestra’s essence, so even its profound magic can be appreciated in circumstances where the ability to hear can’t be taken for granted. That’s a really fascinating challenge. 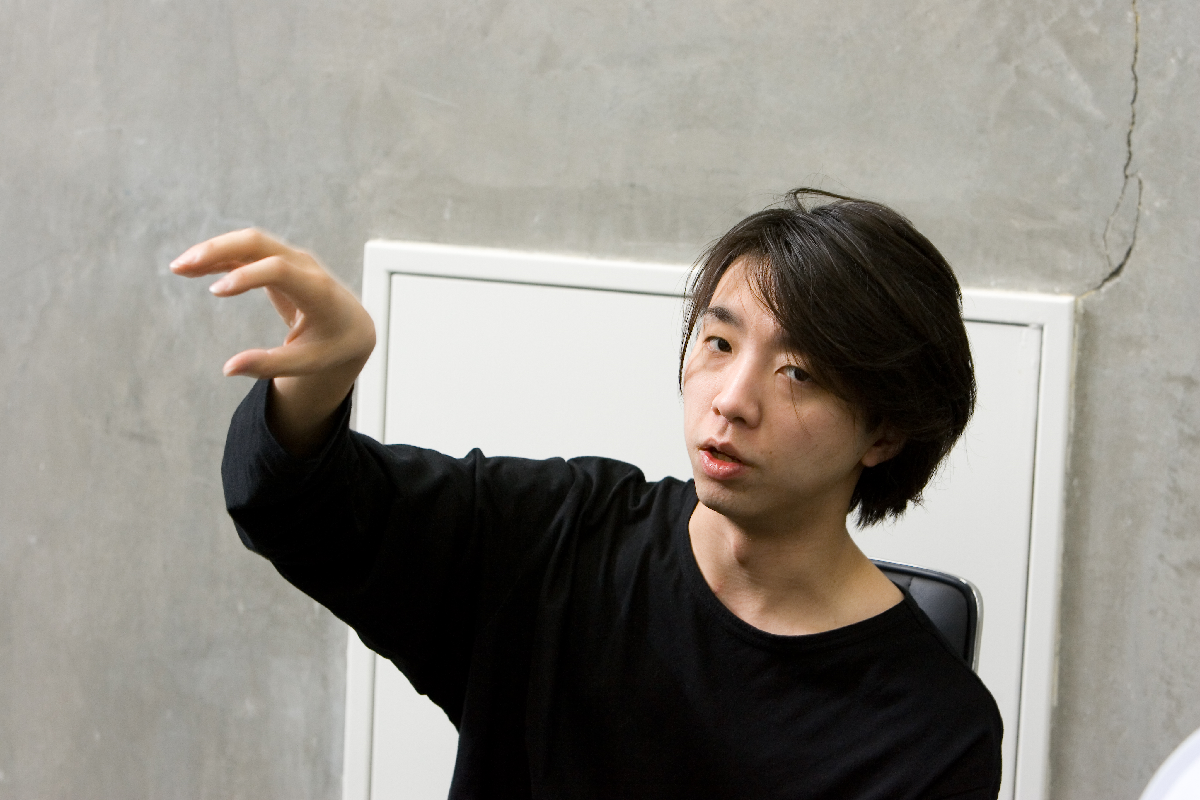 YAMAGISHI: You’re on the same wavelength with us, Ochiai-san, right down to understanding the orchestra’s 300-year history and how it operates as a medium, so I believe that we should be able to further explore its possibilities together.

USAMI: Incidentally, we’ve arranged an area during the concert where you can actually put on the Orchestra Jacket and try conducting yourself. The orchestra plays exactly as you conduct it with your baton. The sound of each instrument is picked up by the microphones and heard in real time from the jacket.

YAMAGISHI: We want to make the effect as vivid as possible. One of the concert’s big attractions will be that the handicapped will control the live music themselves and realize it at their own tempo.

OCHIAI: To repeat myself, if we get reactions like “It was fascinating to be able to experience something I would normally never listen to” or “An orchestra must be enjoyable for someone who can hear,” then I think we’ve failed. We want them to transcend the level of understanding and just enjoy the music.

YAMAGISHI: This project has made me feel much closer to people who are hearing impaired. It would be wonderful if, through the medium of music, by tapping the power of technology, we could turn this into an opportunity to become closer to one another.

USAMI: It all started with a single tweet from Kento Nakai, and from there the project has ballooned into this. It would delight me if, as initiatives like this catch on, more and more people discover new worlds they never knew of before, just as I have, and are inspired to imagine things that have never even occurred to them.