Classical chamber music and corporate organizational development—an odd combination? For sure. But these are exactly the two components Hakuhodo Brand & Innovation Design put together to inspire innovation and transformation in its client businesses. Yasunori Mori, Director at the division and a student of the clarinet, talks about why and how they mix the two elements and the significance and outcome of such an endeavor. He is joined by members of the Amicus String Quartet, which takes part in making the program. 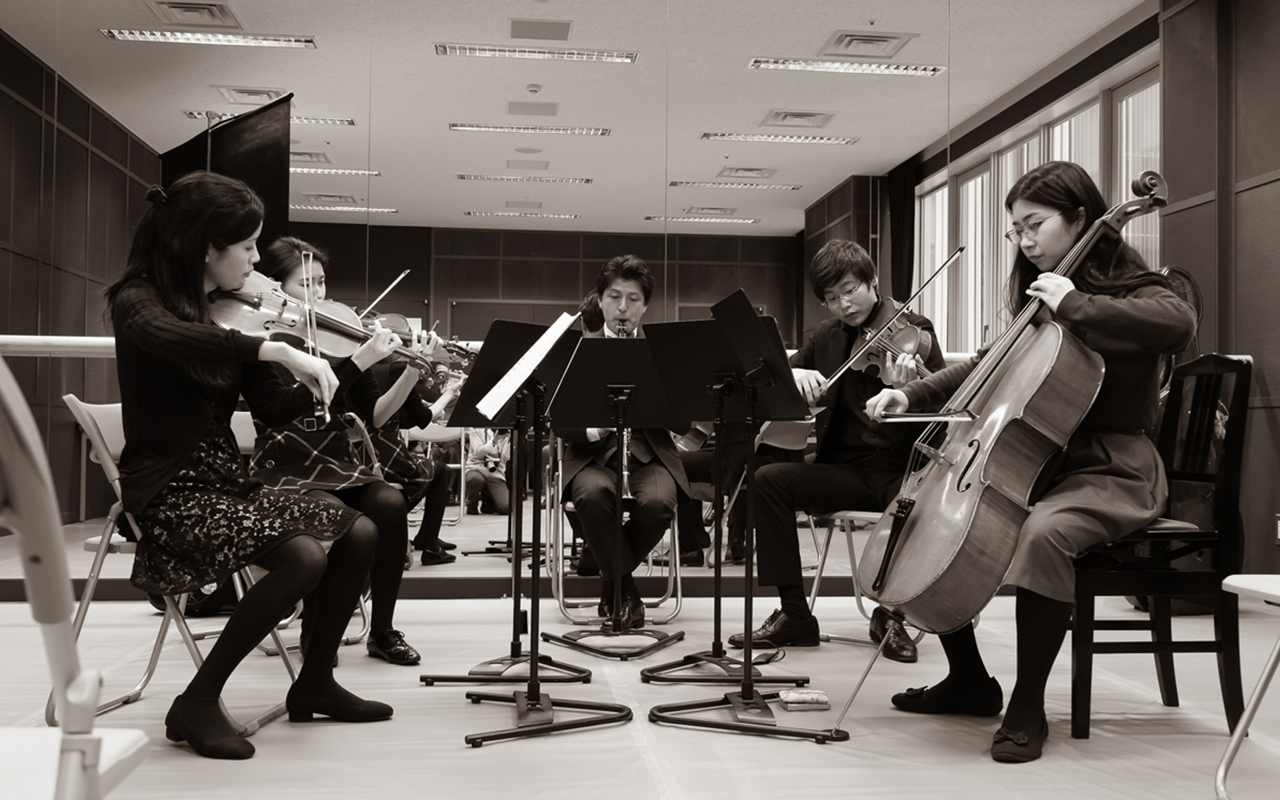 How did you come to the idea of applying chamber music to solve organizational issues? It almost seems bizarre.

MORI
We at Hakuhodo Brand & Innovation Design help create new businesses for clients and encourage social transformation. But creating a new business takes a lot of effort and time, and puts extraordinary stress on those carrying the project. This is why we recommend that they start with something they are truly passionate about, and see business and social change as an extension of their passion.

And you are walking the talk yourself.

MORI
Yes. I started playing the clarinet in junior high school and still study it with great teachers like Masayoshi Ubukata and Tomomi Takahashi. Also, I have long been inspired by Orpheus Chamber Orchestra, an orchestra based in New York that is known for its conductor-less performances. The Orpheus Process, a unique approach that invites its members to take the lead in turn, has since been adopted by businesses and organizations in their management and training. It also attracted attention in Japan about two decades ago but did not become popular.

MORI
I’m not entirely sure. Possibly because the outreach activities were not accompanied by convincing musical performances or explanations. But I was riveted by the idea. I think it could have gained momentum had it been introduced in a different way.

Three years ago for an internal branding project, I had the opportunity to introduce to my client the theme of Self-leadership with reference to the concept of Teal organization championed by Frederic Laloux. “Self-leadership” refers to individual leadership taken by each member, aiming to exercise collective intelligence in which the hierarchy and chain of command might change in any way, as if they did not exist at all.

There is no better example than classical chamber music, typical of which is the string quartet, to exemplify this fluid style of leadership. An excellent performance never fails to show signs of this. Contrarily, a performance in which there is one “boss” whom others simply follow like it’s a job somehow does not have the same appeal to listeners. I thought the idea of combining methods of organizational development and chamber music performance can be particularly useful for businesspeople. So, I proposed the concept to the client who fortunately was willing to accept it.

This led me to meet the Amicus String Quartet when I asked them to play with me on this occasion. A musician is an expert in his or her instrument, but a bunch of experts does not always translate into an excellent team, whether in a quartet or a company. We performed pieces of chamber music to illustrate how an organization might be successful while respecting each person’s specialties and personality, and how they might exercise individual leadership toward each other. The performance was designed to demonstrate this concept in a tangible way. We also presented to the client’s board of directors what Self-leadership and Teal organization would mean in their business.

The string quartet workshop aimed to provide guiding principles for developing a new business and extended applications of the Orpheus Process, both in close relation to the clients’ internal branding.

How does the program work?

MORI
First, and very importantly, we expose the participants to the power of performing arts. The quartet simply plays the music, and the participants listen. In the subsequent workshop, we use a method called the Thematic Apperception Test where each participant chooses one of the 240 concept-visualizing cards that best describes the relationship between themselves and their organization to tell a story about the evolution of their relationships. This exercise builds self-awareness and clarifies the vision of the organization, helping to verbalize the future they want. 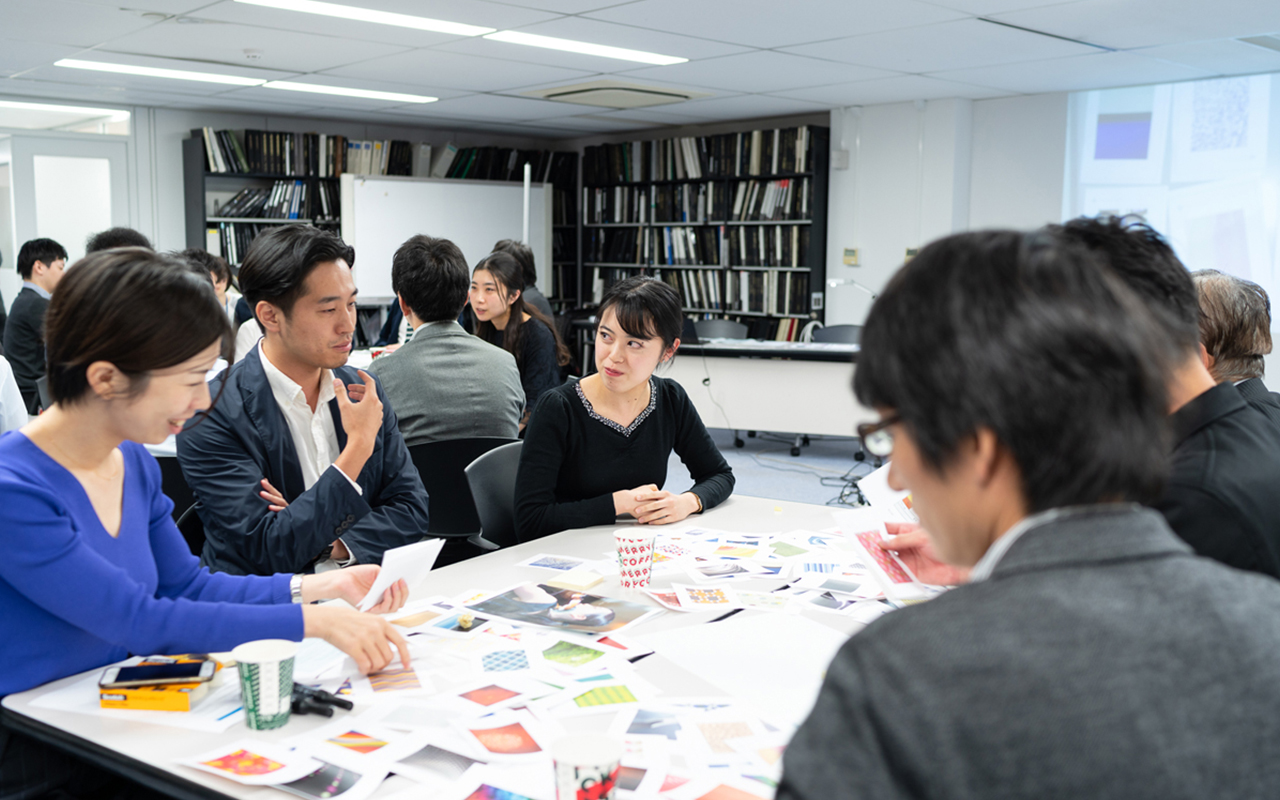 Listening to the musical performance is effective?

MORI
Most of all, I simply want the participants to feel the power of art by actually experiencing it. This opens up their minds and true selves, helping them to explore what they really want in life in relation to work. Second, we propose the power of Social Capital through the group performance. Simply put, Social Capital is improving the quality of a company by strengthening the quality of relationships among its members. Thanks to the research by US sociologist James Samuel Coleman, the theory has been shown to apply in Japan by two surveys I conducted with 3,000 samples.

There is a good example to showcase the power of Social Capital in a research conducted by AnnaLee Saxenian (https://www.hup.harvard.edu/catalog.php?isbn=9780674753402), which compared the levels of success between enterprises in Silicon Valley and Boston. Given comparable levels of talent and research funding, researchers affiliated with different institutions in Boston rarely worked with each other, possibly due to the strict requirements for confidentiality or their competitive mindset, whereas Silicon Valley thrived through active and dynamic interaction among researchers, and we already know the rest of that story.

The performance by the quartet is meant to illustrate the core concept, which is that organic interpersonal connection and collaboration lead to excellent results. Needless to say, the musical performance must be compelling enough to serve that purpose. The Amicus String Quartet never fails to impress us with performances beyond one’s expectations. 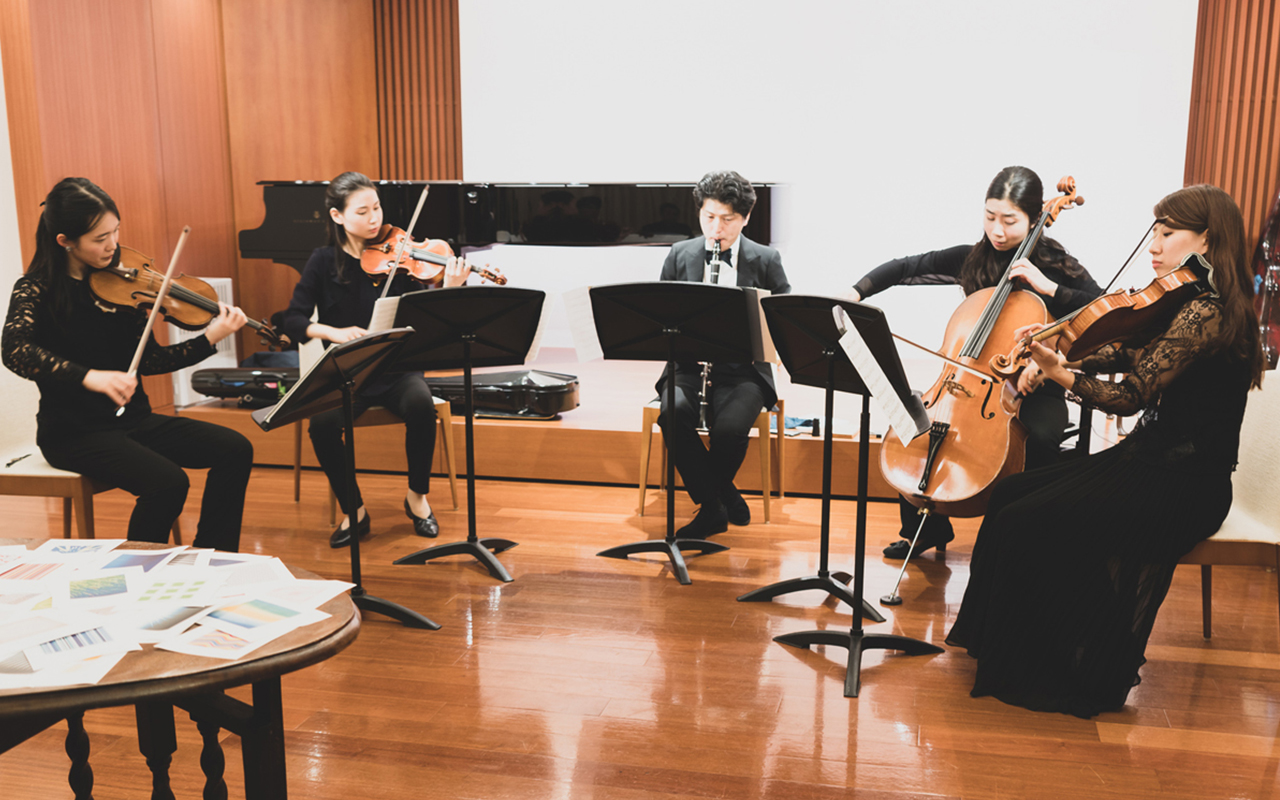 I heard that you sometimes have experiments in your performance.

Does that change how it sounds?

YAMAMOTO (Viola)
Yes, considerably, and it definitely sounds different to the audience. Not only that, as players we hear unusual sounds because different instruments are positioned next to us. Sometimes that’s distracting, but sometimes it makes us feel brand new. I’m sure it affects our performance.

MORI
A small change in the seating positions makes a big difference. Sometimes it works better, but sometimes it seems to distract the attention of the players.

Is this a metaphor for saying changing the configuration or composition of people has a substantial impact on the organization?

MORI
Exactly. An organization with fluid structure can improve its performance or create a new atmosphere. We often ask participants to reconfigure the quartet as they think fit, and see what difference emerges.

MIYAGAWA (1st violin)
The audience often notices the changing leadership in our performance. The first violin does not always take the lead throughout a piece of music; the second violin or cello may take the lead in some parts. That can surprise the audience because leadership rarely changes during a project in a business organization.

MORI
Sometimes we demonstrate a section where the second violin, which usually plays a supporting role, takes the lead of the ensemble. In other cases, we change the part originally allocated by the composer to each instrument. For example, the viola plays higher notes than the cello by function. But Johannes Brahms, a 19th century composer, often wrote duets in which the cello plays the higher notes, accompanied by the viola playing the lower line. He intentionally turned around the intrinsic registers of the instruments.

As an experiment, we switched the viola and cello parts to bring the instruments back to where they normally belong. Interestingly, we found that the character of the composition drastically changed as the intensity of sound gained by the original instrumentation was lost. You don’t have to appreciate classical music to hear the difference. This shows the structure of power and order within an organization should not be immovable.

Is there a common ground between musicians and businesspeople?

MORI
Yes. There were some skeptics who initially suggested my attempt would not succeed unless the participants were well-versed in music but we found this to not be true. When effectively facilitated, we saw that we can achieve meaningful interactions among the participants. Even those who are not familiar with classical music may be highly sensitive to music in general. When one of the quartet members was a substitute, for example, a participant shrewdly noticed who the replacement was, even though there was no observable difference in the quality of performance. Some of the workshop participants became regular concertgoers: attendance at Amicus recitals has been increasing.

What kind of organization can benefit from this program?

MORI
The program is not targeted toward any specific industry. The only prerequisite is that the client embraces the idea of leveraging art for organizational change. So far, most of our contacts have been in corporate planning, human resources, or R&D departments. Having said that, however, I believe that this program is most effective for junior employees below middle management or top executives at the board level. 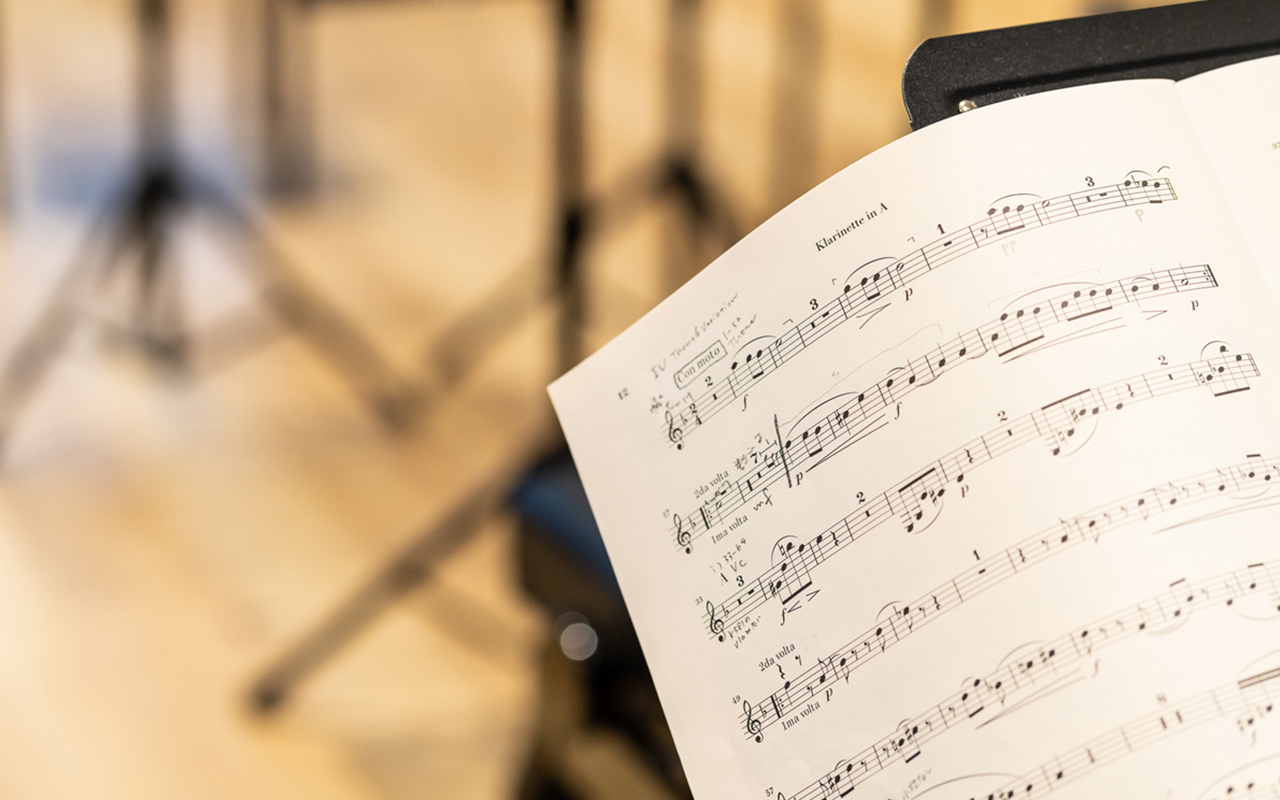 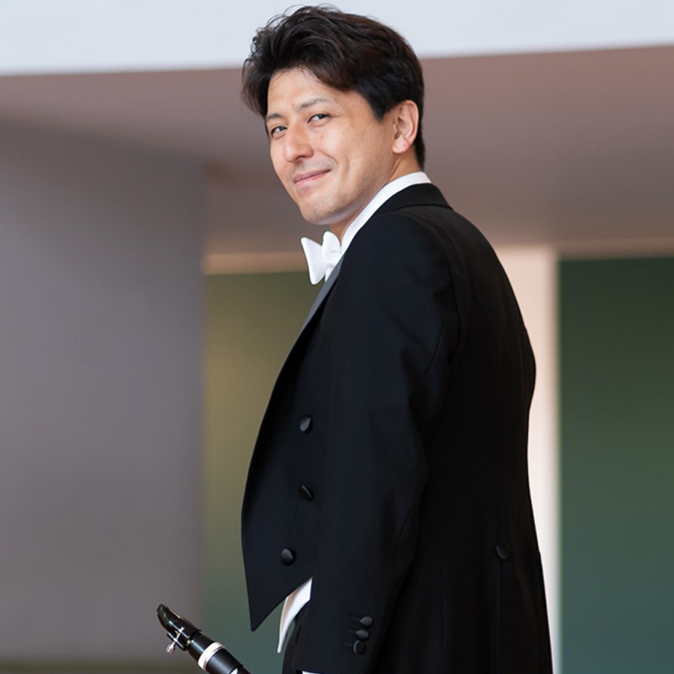 Yasunori Mori
Director
Hakuhodo Brand & Innovation Design
Yasunori Mori was involved in PR strategy and public events/exhibition work prior to commencing branding work as he does now. He specializes in B2B brand management, executive coaching and organizational development, while receiving clarinet lessons from Masayoshi Ubukata and Tomomi Takahashi. He uses his analytical perspectives on fine arts and organizational development techniques in his work. 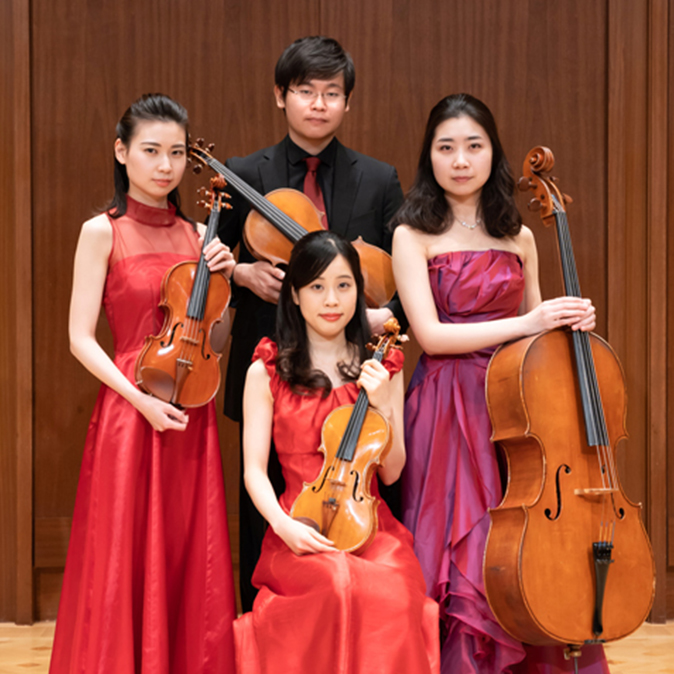 Images of Amicus String Quartet by Naoya Ikegami. All other images by Reiko Hayakawa.