“What do we see in a decentralized future?”

UNIVERSITY of CREATIVITY (UoC) recently hosted a four-day event entitled Creativity Future Forum, bringing together people of all ages from the arts and science, industry and academia to explore and exchange ideas. One of the livestreamed sessions invited participants to consider an intriguing question: “What do we see in a decentralized future?” Conducted on December 2, 2021, the session featured creative minds from UoC in Tokyo and ATÖLYE in Istanbul and Dubai, who shared their insights from the perspectives of business, urbanism and education. 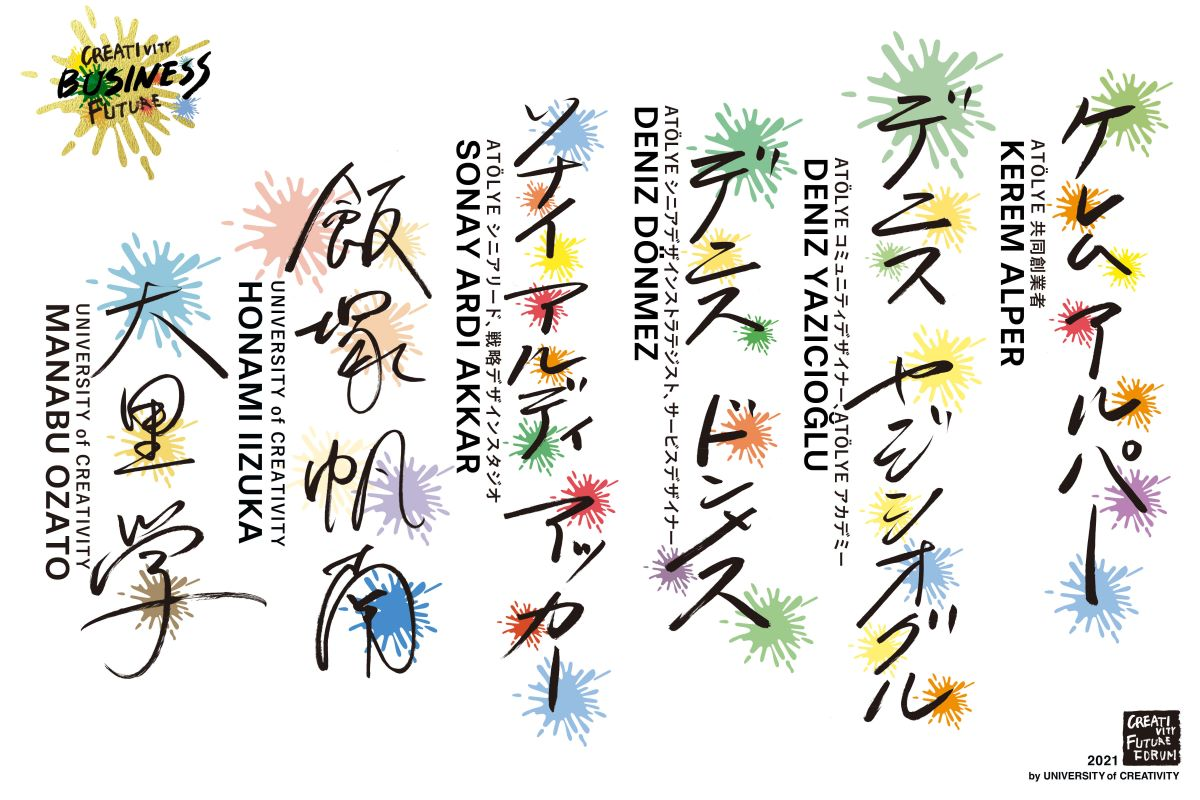 UoC’s speakers were Manabu Ozato and Honami Iizuka, while ATÖLYE was represented by four members: Kerem Alper joined in from Dubai, along with Deniz Yazicioglu, Deniz Donmez and Sonay Ardi Akkar from Istanbul.

Honami (Producer at UoC) opened the session by welcoming everyone, and then asked Kerem (ATÖLYE’s Co-founder) and Manabu (Field Director at UoC) to set the scene by introducing their respective organizations.

ATÖLYE—harnessing the power of collaborative creativity

“The purpose of our existence is to create an environment where individuals and organizations can collaborate for a better world. This is where our four divisions come into play,” Kerem explained. ATÖLYE harnesses the power of creativity to tackle the challenges faced by business and society with an academy, a strategic design studio and a vibrant creative hub. The fourth division, ventures, is focused on incorporating long-term perspective into existing projects.

In line with the theme of the session, Kerem pointed out that ATÖLYE is always striving to think of ways to achieve a more decentralized system. One concrete example from their organization ecosystem can be found in a learning community in the ATÖLYE academy. This community has its own tokens—or incentive system—through which participants can actually share in the value that is created and retained.

Then it was over to Manabu, who introduced UoC. Established in September 2020 by Hakuhodo, the UoC is located in Akasaka in the heart of Tokyo. With the mission of serving as a lifelong learning hub for people of all ages, UoC aims to cultivate human creativity and reimagine the future. Both adults and children come to UoC to participate in seminars, workshops and study groups.

Manabu noted that including the perspectives of stakeholders from various sectors and getting input from everyone is of great importance. “We are an organization for researching and implementing creativity, but at the same time, we are an open innovation platform of creativity,” he said.

He used the production of soy sauce as a metaphor for explaining two inextricably linked challenges within the field of creation—it is very field-dependent and difficult to scale, and diversity is still limited. Soy sauce is traditionally made in small batches in wooden vats, with an emphasis on quality over quantity, while modern mass-produced soy sauce is made in stainless steel vats, which ensures uniformity but lacks diversity.

Manabu noted that UoC takes the “wooden vat” approach. However, under the DAO (decentralized autonomous organization) approach— community-led entities with no central authority—it may be possible to combine the characteristics of wood and stainless steel through autonomous operations for the best of both worlds.

In the second part of the session, participants from UoC and ATÖLYE responded to questions, sent to each other in advance, about what a decentralized future might look like in terms of business, urbanism, and education.

The first topic was business, and Manabu responded to a question about the future of work in Tokyo—what life would be like if everyone was a freelancer. Although today’s jobs are predominantly skills which can be converted to monetary value, Manabu suggested that a decentralized system would lead to greater diversity. “With decentralization, we believe that how we define value will differ and that the ways in which we exchange value will increase—as we are starting to see with bitcoins and NFTs (non-fungible tokens),” he said.

Honami added that Japan’s employment scene has diversified significantly even in the past five years, with increased numbers of freelance workers and less emphasis on being tenured for life at one corporation.

Community, ownership and transformation in cities of the future

Discussion moved onto the second topic—urbanism and the role that decentralization might play in shaping both Istanbul and Tokyo in the future. Deniz D. (Senior Design Strategist & Service Designer at ATÖLYE) explained that Istanbul is currently very centralized in terms of governance, and introduced two fundamental needs to make decentralization possible—a sense of belonging to a community and ownership of one’s space. 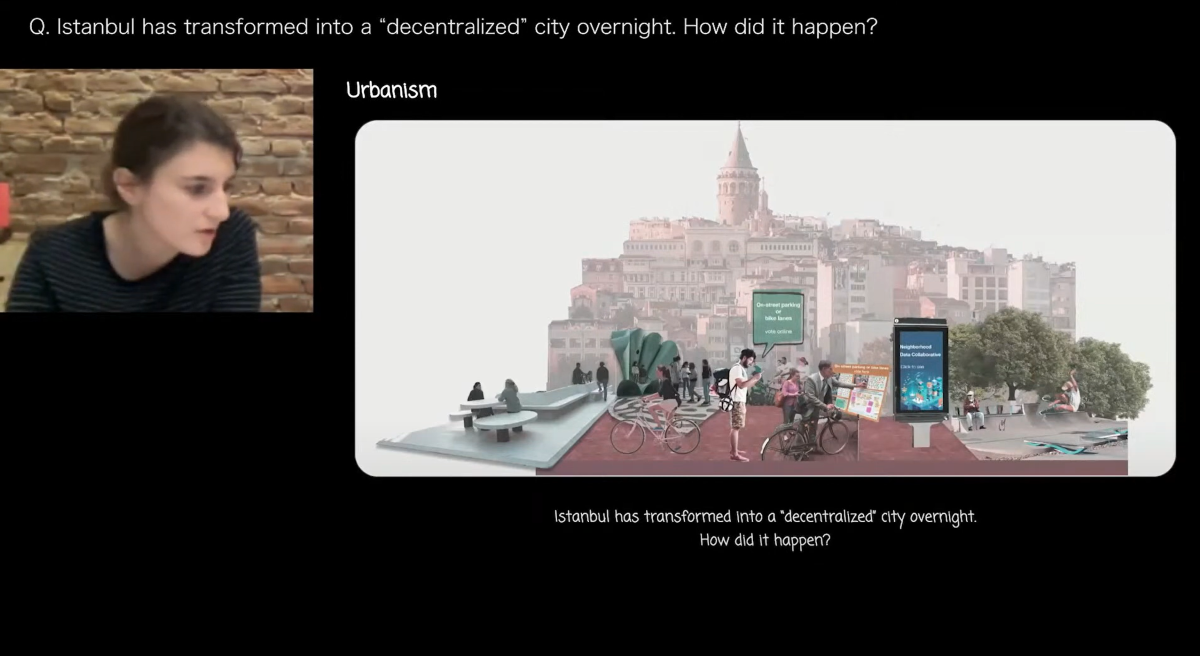 By way of example, her team envisage multifunctional public spaces which users can transform to suit their needs. Deniz D. also commented on the data currently being collected on citizens and the issue of ownership. “Is it on blockchain? Is it on some sort of network where you don’t need to trust some authority to make sense of it for you? Maybe it could be left in the hands of the citizens themselves,” she suggested.

Honami then remarked on the commonalities in the idea of having spaces open for people to interpret freely—already a core concept at UoC—before handing over to Manabu. He presented the UoC team’s vision of what a futuristic public space and a fully decentralized neighborhood in Tokyo might look like. The National Diet, Japan’s parliament building, was used to symbolize their vision. 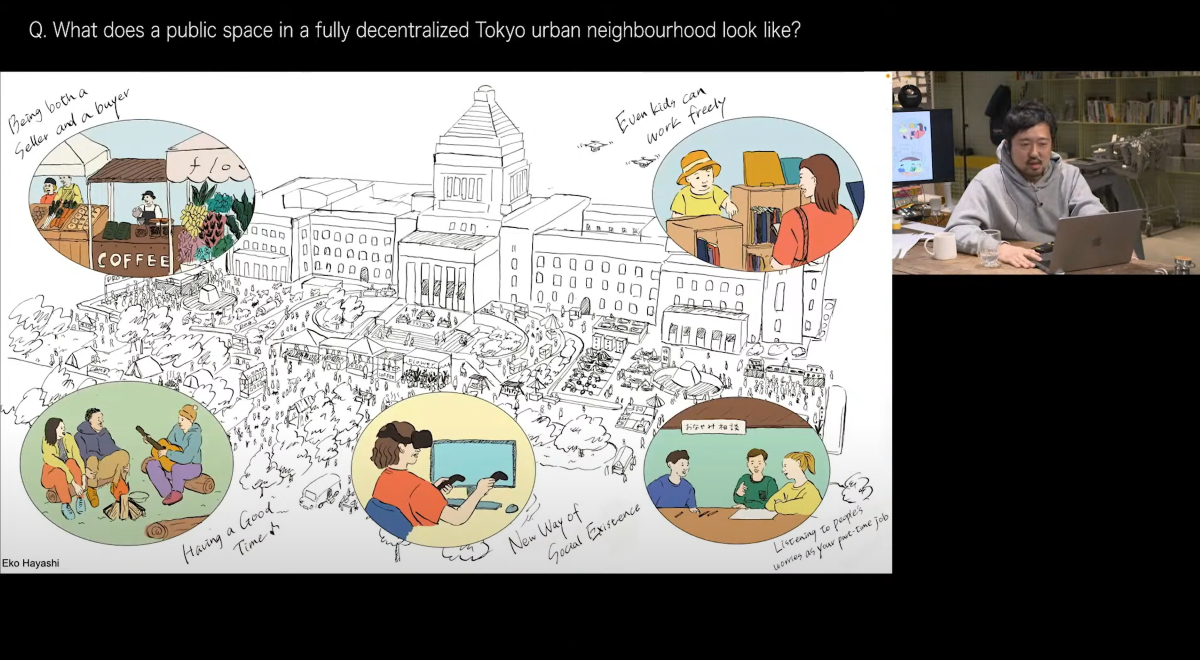 “As this building is a representation of all Japanese citizens, it should be the most public place in Japan. However, currently this is not the case. The front gate of the Diet building only opens on the first day of Congress,” he explained. “So, in a decentralized Tokyo, we would like for the National Diet Building to become a fully public and open space, bustling with vibrancy and action.”

Facilitating learning spaces for all with DAOs

Moving on to the third and final topic, Deniz Y. (Community Designer at the ATÖLYE Academy) kicked things off with the Turkish’s teams thoughts on how decentralization could shape the educational sector. Noting parallels with current gaming technology, she described a metaverse with various kinds of spaces designed specifically for a certain learning material, where learners participate using IDs and can personalize the space to suit their own needs. 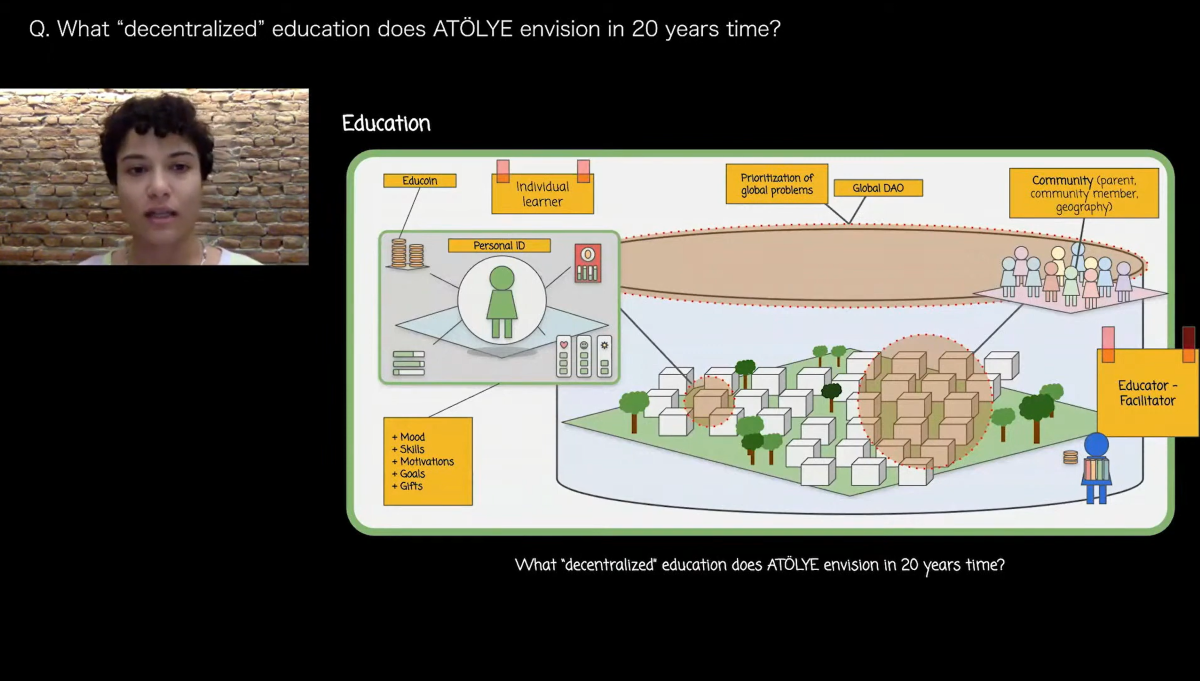 Individuals would collect some kind of tokens or points which would allow them to have a stake in whichever organization they are learning with. She explained that the same concept would apply to educators, who could take ownership and profit from their own curriculums and research without being tied to a specific institution.

In terms of the broader picture, she suggested that a DAO system will allow communities to come together to create learning spaces where they can review and solve their problems themselves. “In short, a combination of total social tokenization and various DAO scales is the future of education,” Deniz Y. said in summing up.

Next up was Honami, who presented some ideas from UoC, beginning with the possibilities that could arise if universities became decentralized autonomous organizations and any location could become a space for learning. Universities—currently the domain of those aged 18 to 22 in Japan—would be more accessible to any age group. 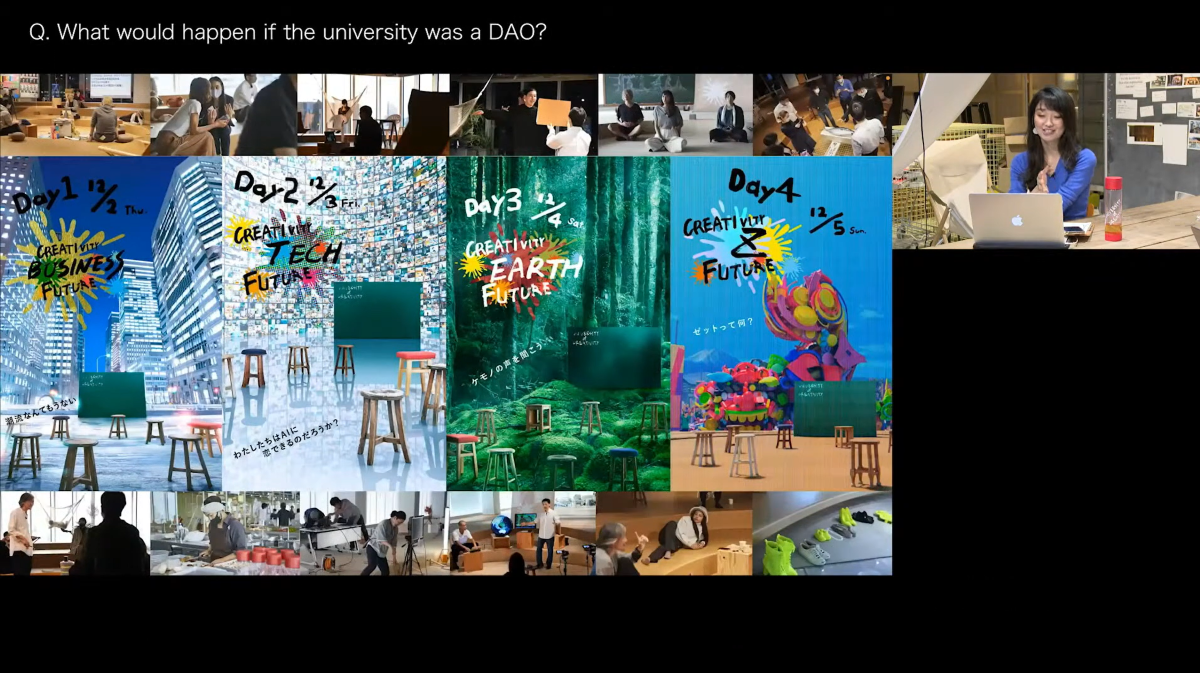 She also mentioned the current trend towards a blurring of the intersection between businesses and academia. “If universities become a DAO, we think it would be possible not just for traditional universities, but also for businesses to issue credits. And those credits can be interchangeable, no matter which country or organization,” Honami said.

As the session drew to a close, hopes were expressed on both sides for continued synergy and future collaboration on common themes. “It has been interesting to see how there are local differences while talking about the same things globally,” Sonay (Senior Lead at ATÖLYE’s Strategic Design Studio) observed. “I’d like to see how these local differences emerge in the future and how we can benchmark or compare the results of what we have talked about today.” 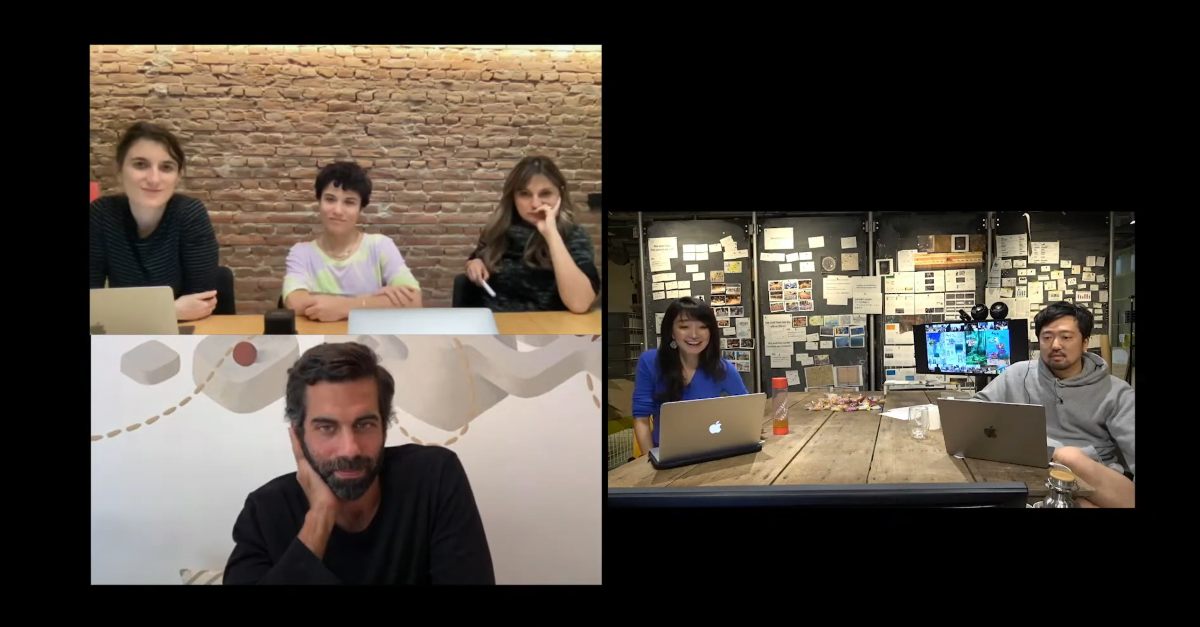 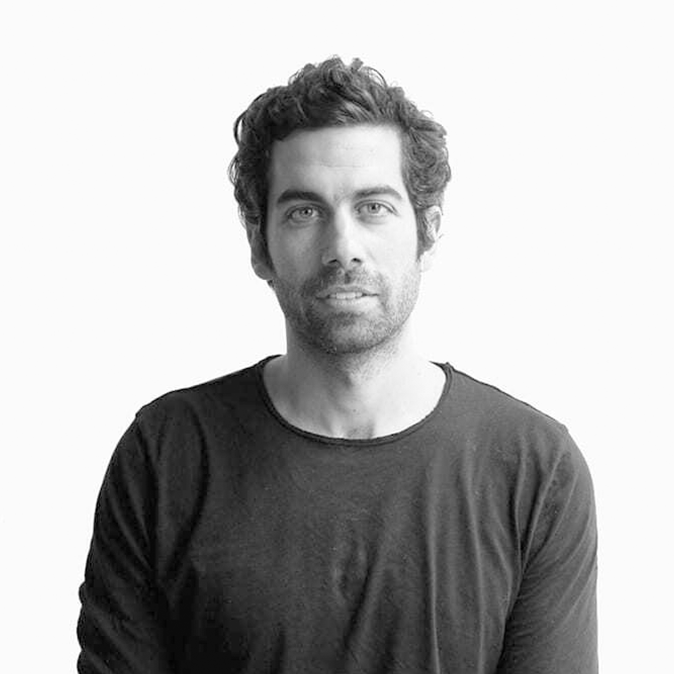 Kerem Alper
Co-founder, ATÖLYE
As a multidisciplinary systems thinker with a background in entrepreneurship, sustainability and design, Kerem is driven by a deep commitment to unleashing the creative confidence in communities and enabling meaningful change in the world. He is primarily responsible for imagining the next stages for ATOLYE, whether it is paving the way for a transformative Academy or a new-generation Venture Building into the ATOLYE organization, or facilitating explorations in other parts of the world such as Dubai, London and Barcelona. 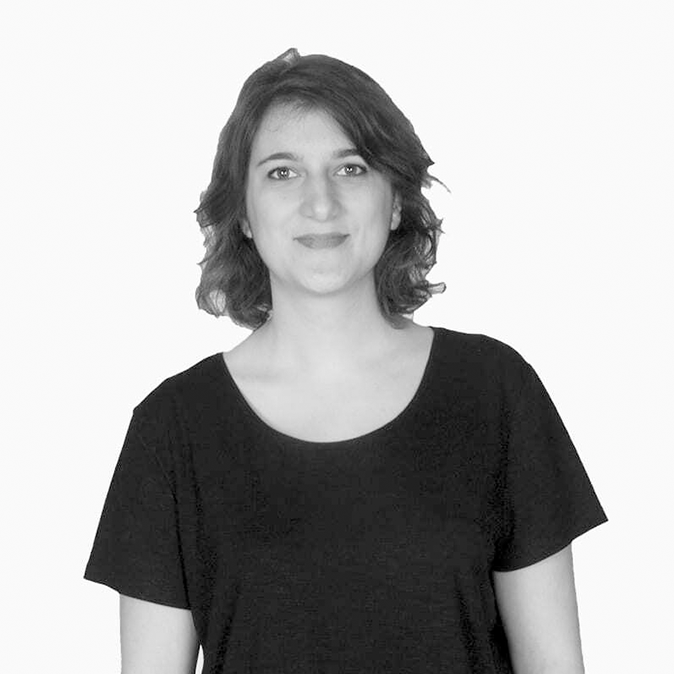 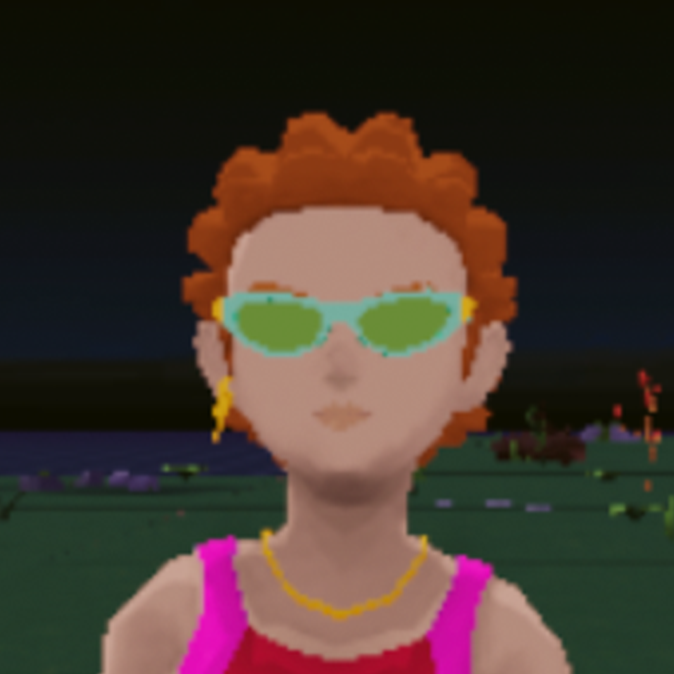 Deniz Yazıcıoğlu
Community Designer, ATÖLYE Academy
Deniz works in the intersection of entrepreneurship, education, and community. In addition to her role at ATÖLYE, she is also a community manager in a DAO and NFT project, applying her learning to web3. Deniz designs experiences for ATÖLYE Academy’s Learning Community, managing the community, building strategy and streamlining operations. 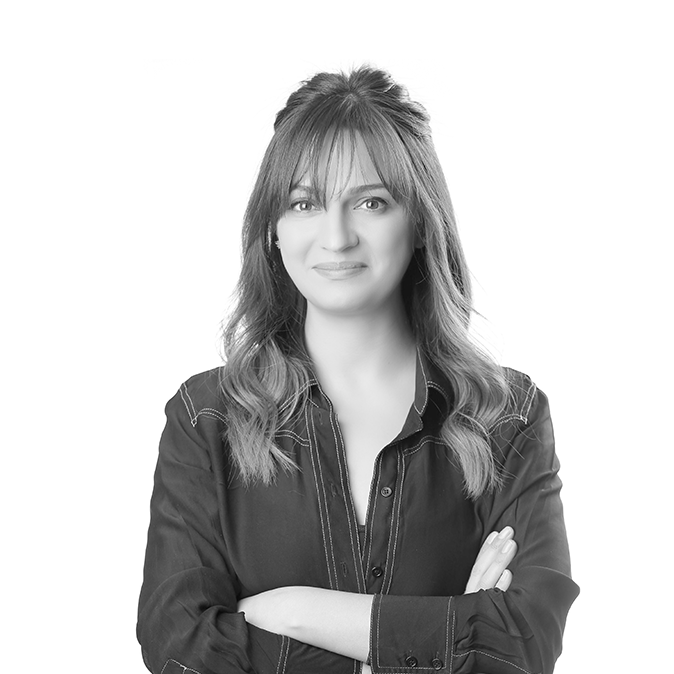 Sonay Ardı Akkar
Senior Lead, Strategic Design Studio
Along with her deep experience in the automotive field, Sonay enjoys solving problems and designing new products and services in various fields of experiences. Drawing on her passion to impart information on design and her role as a part-time lecturer in Özyeğin University, she is leading the studio’s service design team in terms of learning and development. 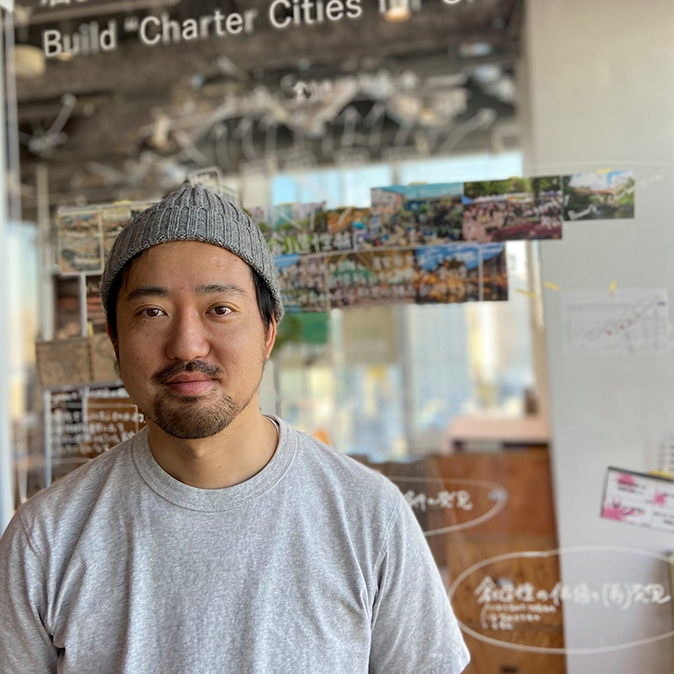 Manabu Ozato
Field Director, UNIVERSITY of CREATIVITY
With 13 years of experience at Hakuhodo in accounts, media and creative, Manabu has been leading UoC’s “Charter Cities for Creativity” Project, which redesigns administrative policies to be more creativity-friendly. 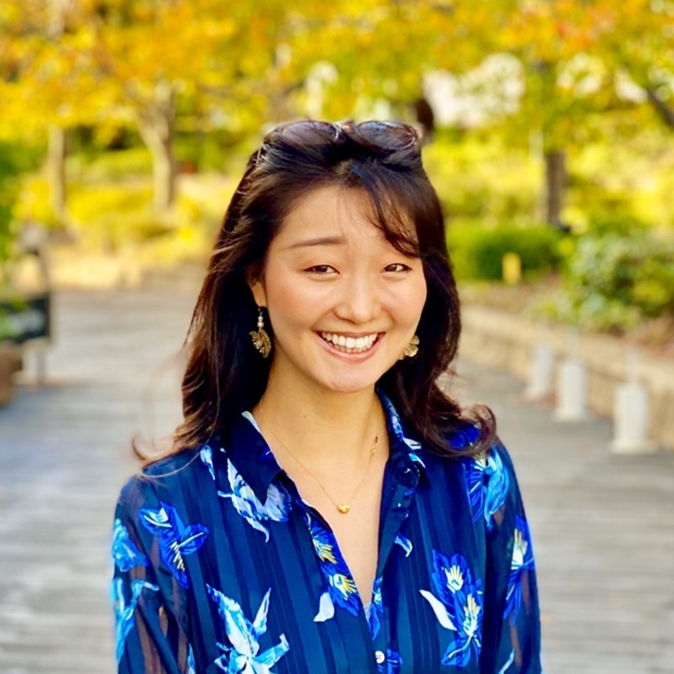 Honami Iizuka
Producer, UNIVERSITY of CREATIVITY
Honami is a Japanese national but spent her youth in Taiwan, Shanghai, Pennsylvania and Vermont. She previously worked for a real estate company which managed the Athletes’ Village for the 2020 Tokyo Olympic and Paralympic Games. She currently works on a freelance basis, serving as a producer for the global team and young talents engagement team at the UNIVERSITY of CREATIVITY in Tokyo.
SHARE
Back to News & Insights