How can we reframe the “errors” that don’t fit with optimization as something worthwhile?

Ars Electronica Festival, a media and art event, was held again this year from early September in Linz, Austria. It drew over 105,000 visitors across five days, a new record for the event. Over 1,300 artists, scientists and technologists from 54 countries also participated, making for a huge Festival. 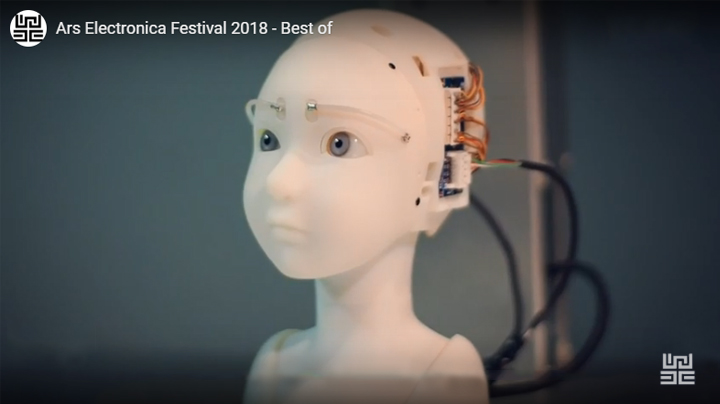 Footage of the Festival

The Festival theme was “Error—The Art of Imperfection”

As an aside, I first heard “Error,” the keyword of the theme of this year’s Festival, at the beginning of the year. I was doing a research residency at Ars Electronica Futurelab at the time and was fortunate enough be present when Ars Electronica’s Artistic Director Gerfried Stocker and members of Futurelab were brainstorming themes for this year’s Festival, which would follow on from last year’s Artificial Intelligence theme. 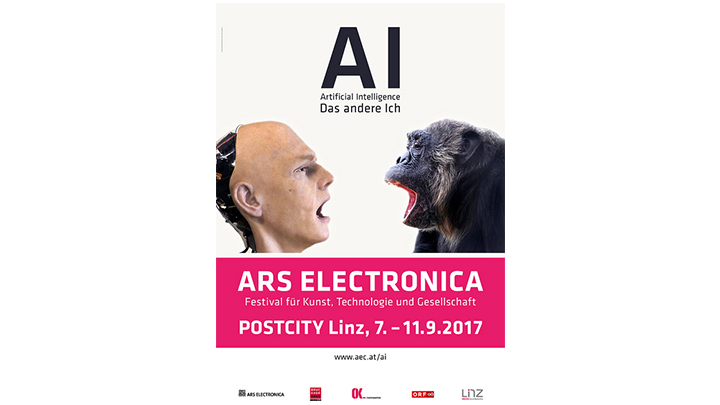 As various keywords were bandied about, discussions became animated as we tried to come up with something more encouraging, something that would better convey human potential.

Then the word error suddenly popped up and time stopped for everyone present. A picture of Linz City with posters with the word Error on them for the Festival formed in my mind’s eye. I’d wager that everyone there at the time was picturing the same scene.

After that, ideas came thick and fast: “Error can be used for both humans and machinery (machine error, human error),” “Human error is human creativity,” and the like, and the meeting came to an end with everyone smiling, as it seemed that it just had to be error!

Then, happily, a few months later, in September, the Festival was held with the theme Error. My apologies for straying off topic. 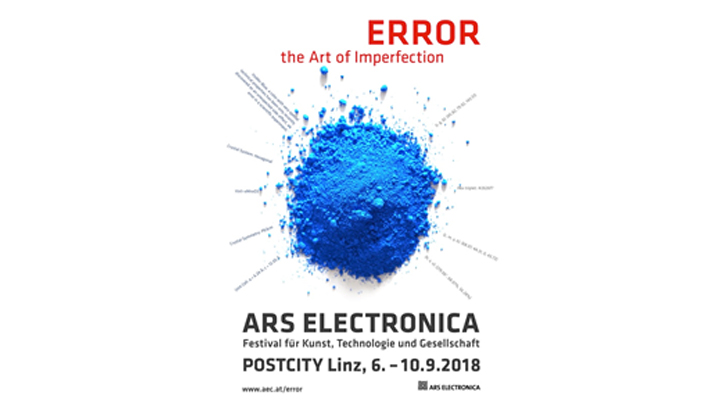 Poster of the main visual for this year
Credit: Ars Electronica / Martin Hieslmair 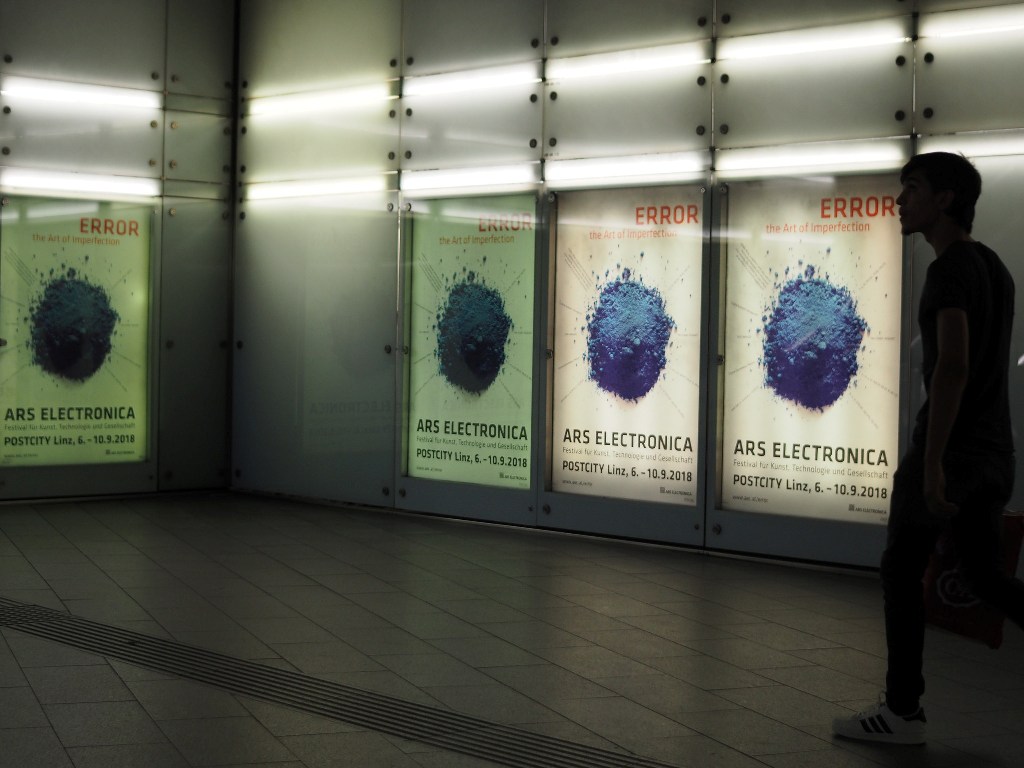 This year’s theme focused on the potential for seeing human endeavors as errors in an age that, with AI, is pushing us toward an optimized society. We proposed to the world that that which is considered an error is in fact an opportunity for human beings, if not our trump card, and that we should embrace our imperfection with courage. It was a very Ars Electronica-like perspective.

Error: A gaze with which to view society

The Hakuhodo team interpreted the theme thus: Amid rapid changes in society, how can we create a positive attitude to that which goes out of the bounds of “optimization”—that is, the gap with what is expected. In other words, we looked to reframe errors not as failures but as something of value.

In a society with a multitude of value systems, one where things that were not previously visible and that we did not previously see have come to the surface, we have entered an age where each one of us is required to be tolerant. We are approaching an age where the relationship between people and information will make a great leap forward through embracement of the Eastern philosophy of animism. Digital communities are appearing that are almost equivalent of physical communities, and we are being required to update existing systems accordingly. And so on.

As we discover all kinds of portents for the future in art, our eyes have been opened to the fact that the future will be greatly affected by whether those of us living today reject new values due to our existing thinking or see them as fascinating and an opportunity. It’s a theme, I think, that exhorts each of us to realize that we are smack in the middle of an age of great change.

Reviewing the Festival as a whole now, after its conclusion, I’d like to offer the following three perspectives for reframing errors. I’ll introduce a very small number of the exhibited works in line with these perspectives. I hope that this will allow you to feel the atmosphere of the Festival, even if only in a small way. 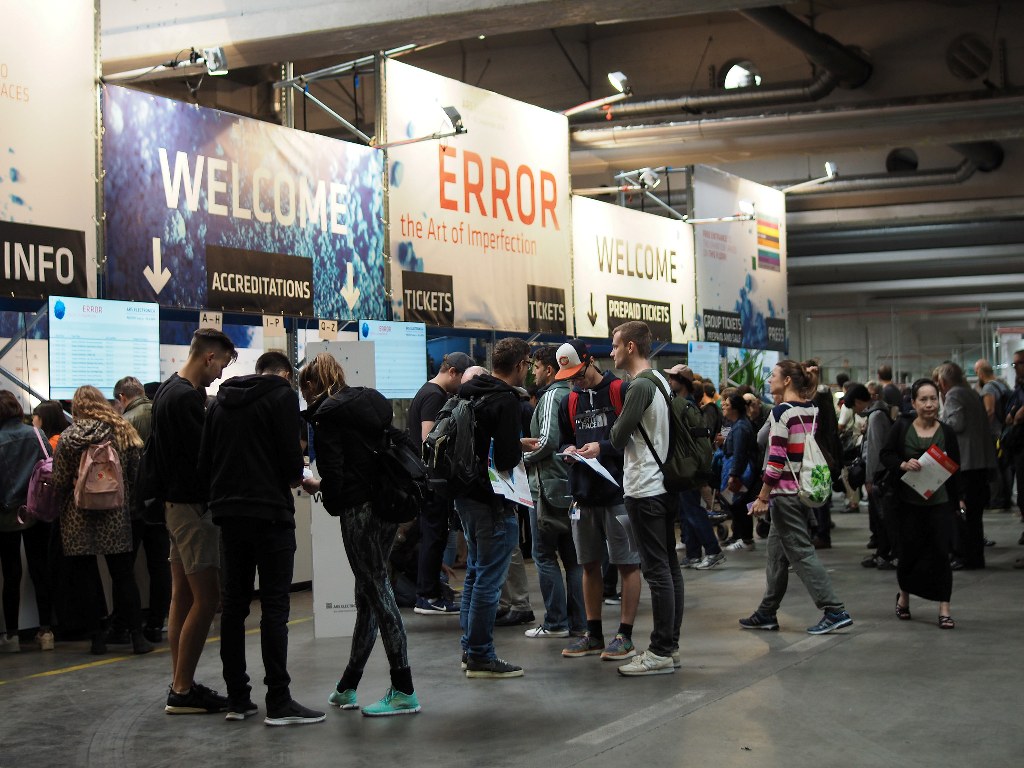 In front of the information center at POST CITY, the main Festival venue
Credit: Martin Hieslmair

Works and projects that ask where the places where human ways and human creativity can be demonstrated are, and what the axes for determining errors should be in a rapidly changing digital age. There were many works that cast criticism at society and the age, giving visual and experiential form to things that we have been blind to until now. We determined that this was the artists’ view of what journalism looks like today.

An initiative to alter 3D data for weapons available on the dark web so that it becomes unusable—and playful. The work reveals a current error—that not everything shared is necessarily good. 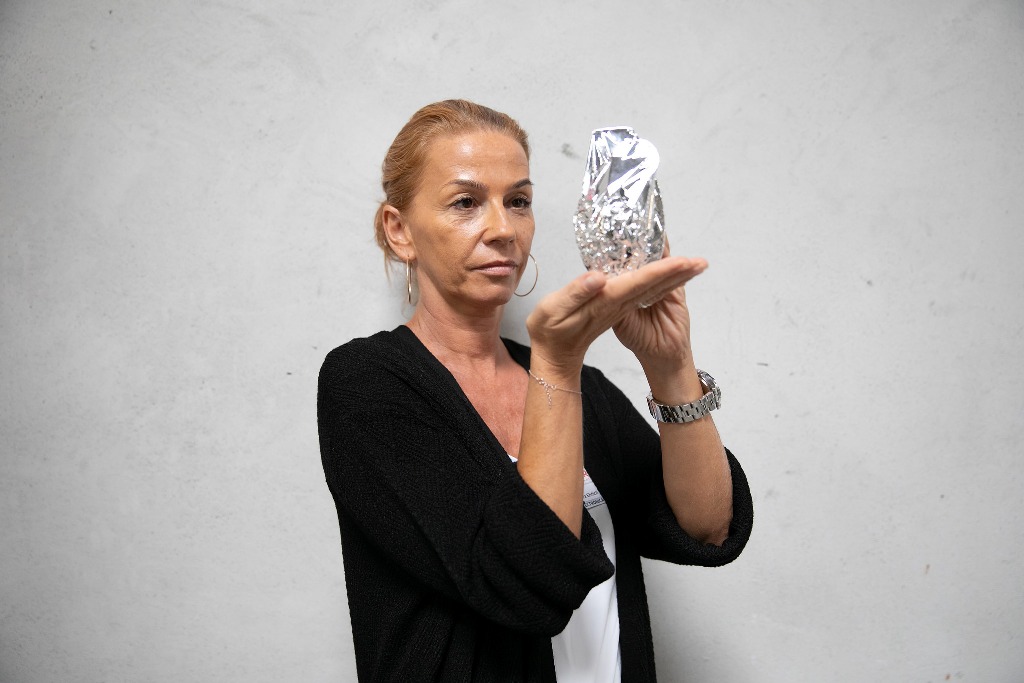 What if the day comes when we can shape and design our insides—even our hearts—the way we can have plastic surgery on our faces today? Beautifully decorated (pigs’) hearts express the potential ability to escape from our present condition from inside ourselves (causing an error). 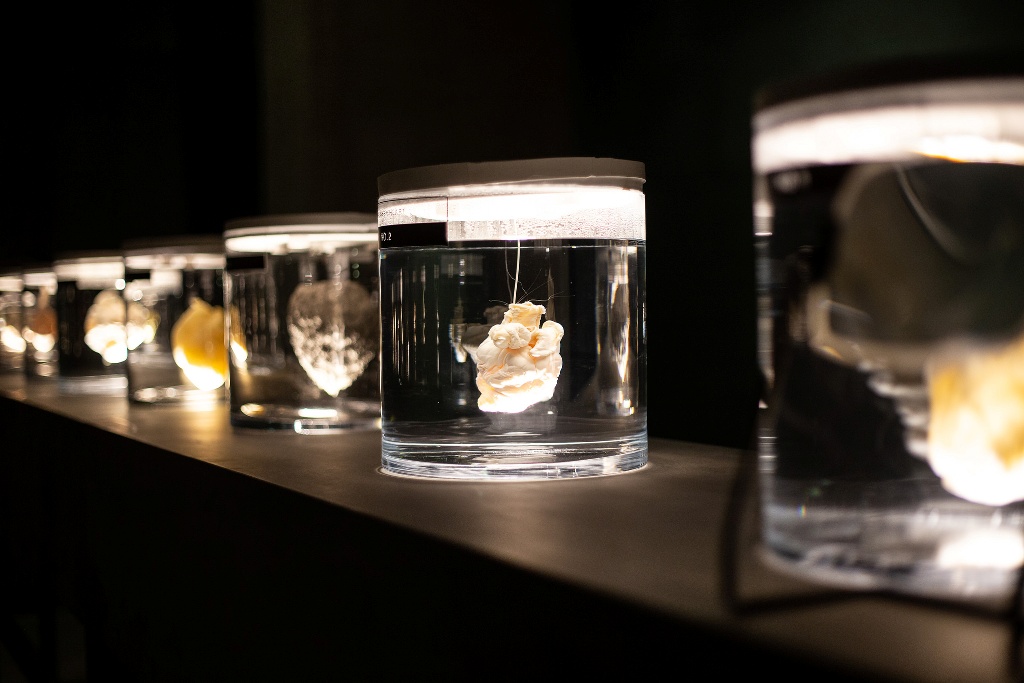 Sustainable leather products generated from mycelium (fungal filaments). A project that impressed with the artist, himself, discussing how it was the unexpected product of an error. It speaks to turning discoveries and errors that would never occur in optimized experiments into opportunities. 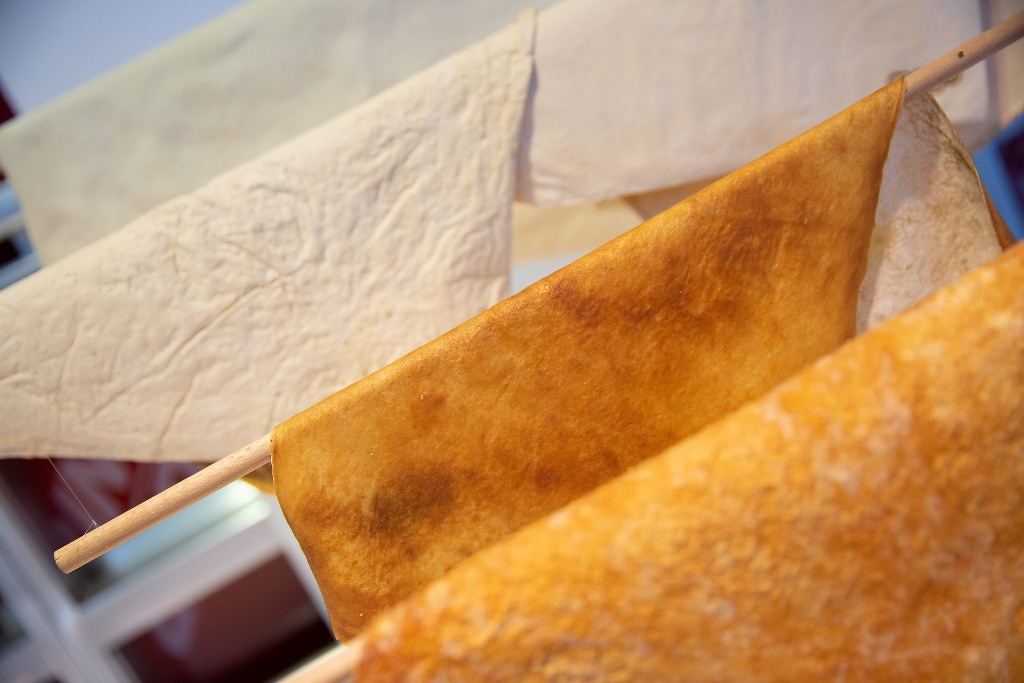 What relationships will people and information build in the future? Domains that stimulate the part of our nature that likes to find life in things that behave like human beings or were simply programmed to move that way are becoming more prominent. These works foresee the radical changes to come in the contours of the society we live in. At the pointy end of the optimized society, what will we be able to love and what will give us joy? Let us think forward to our future emotions.

Human beings are able to clearly distinguish the borders between themselves and others as individuals, but this robot recognizes and judges people who view it depending on their motherliness and shares its assessments with those around it via the screen behind it. It openly has a perspective different from that of human beings. The artist that created the robot declares that she loves and is “raising” this child. (For the record, I was 8% Mammy.) 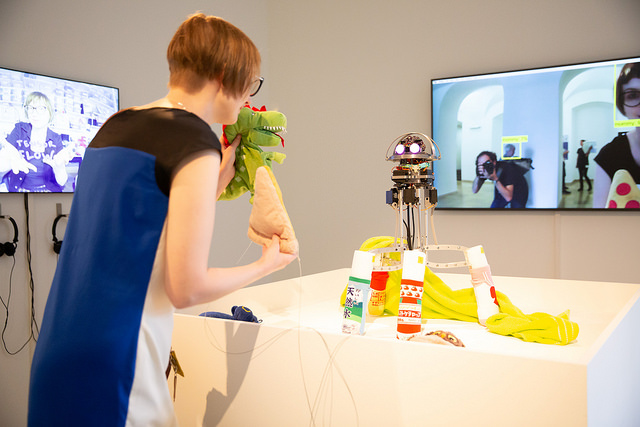 A work where breathing life into a digital device turns on a light. The light turns on when a bubble touches it and goes out when the bubble breaks. It speaks to forms that devices could take to enable us to feel attachment for and humanlike qualities in things and spaces. 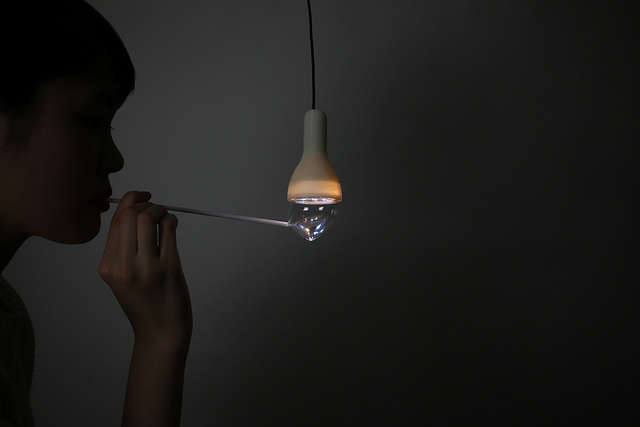 Projects that redefine information value and return the benefit derived from citizens’ personal information to them fairly, and works that make techniques for identifying fake news public on the web, or that satirize the fact that communities aren’t born just by connecting people without a purpose: there was a trend toward showing mechanisms for turning individual citizens’ connections into something beneficial to society.

For the sake of brevity, I will reluctantly refrain from introducing more works here, but please have a look at the 2018 Prix Ars Electronica winners in the Digital Communities category here!

What is “the real world” in our age?

As we move toward an optimized society, that which we ourselves believe to be our creativity and talents may in the future come to be viewed as errors.

Through its festival, Ars Electronica continues to provide a venue for the curation of works that offer glimpses into the times through the perspectives of art, technology and society and for thinking about and implementing things that we can do here and now. It has been endorsed on global level for this endeavor for going on 40 years.

Ars Electronica Festival is a place where you can learn what is going on in the world today while thinking about tomorrow. We, ourselves, create the real world we live in, so it is up to us to try to make it a better place with our own hands. I felt that the great power of the works exhibited at the Festival was encouraging us to do just that.

This year’s Error theme can’t easily be squared away as “tough spots equal opportunities,” but it did provide an opportunity to feel the potential for bringing forth innovation that lies there.

The Festival proper was overflowing with energy thousands of times more than I’ve spoken about here. Aside from the enthusiasm of the people it drew, the whole city was abuzz with discussions sparked by the creative environment, and experiential programs, symposiums, concerts and other events.

We also conduct tours for companies in Linz, so please contact us if interested.
I look forward to seeing you again next year in Linz! 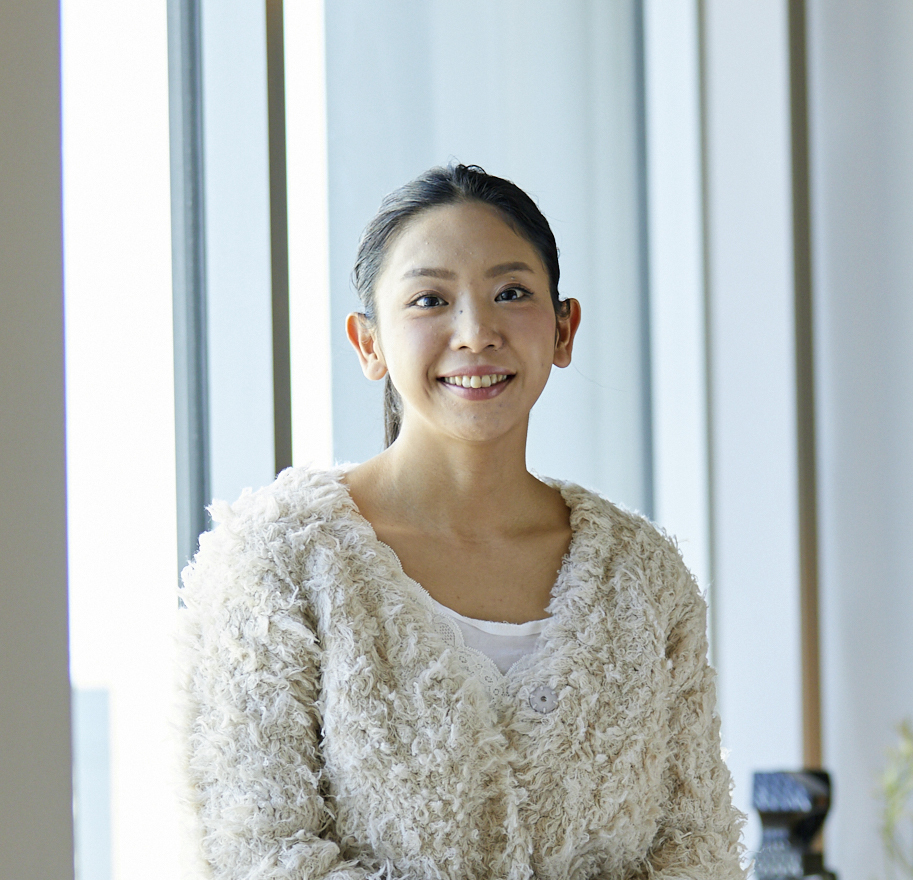