The chief creative officer at United Communications Group in Taiwan, part of Hakuhodo Group, explains how a chance find of David Ogilvy’s ‘Ogilvy on Advertising’ pushed him into the industry

As a youngster and like so many in the industry, Michael Dee didn’t know a career in creativity existed. He grew up in Taiwan as an ‘unruly student’ with a huge capacity for imagination. It was this that helped him stumble upon a book by David Ogilvy that began his fascination with the advertising industry. And, despite having no experience with being a creative, when he spotted a job ad at Ogilvy Taiwan Michael decided to create an advert about himself to land the gig. It paid off and was the start of a career that has lasted 30 years.
To hear more about this serendipitous moment and what three decades in advertising taught him, LBB’s Natasha Patel picked Michael’s brain.

LBB> Tell us about your early days in Taiwan? Was there an idea that creativity would be a part of your life?

Michael> When I was in elementary school, I was defined as an unruly student. I hated being asked to stay in the classroom all the time. When I couldn’t sit still anymore, I would sneak out of the classroom, and I was therefore often being caught by the teacher and punished. Consequently, I felt what I learned while sitting in the classroom was boring. By contrast, everything outside the classroom attracted me.

Yet I was often forced to sit in, so sometimes I would only sit in the classroom, and use my imagination to play outside. I would even put myself into the worlds of the comics, movies, or puppet shows I had just read or seen. After class, I would share with other kids the experiences and stories I made up in my mind. They enjoyed them, and sometimes they even believed they were real. Back then, I always enjoyed this sort of unrestrained imagination. Maybe it was one of the factors that prompted creativity to sprout in my life.

LBB> What were your experiences studying Mass Communication at university and how did this prepare you for the advertising world?

Michael> At that time, the department at the university mainly cultivated talent to work at TV and radio stations. I often sought opportunities to work as an intern at TV stations. Most of the time during an internship I could only help the film unit set up cables and help carry props and equipment. It seemed that that would be my work in the future.

After I graduated and completed my military service, I was still waiting for the opportunity to work for a TV station. A friend of mine who was a popular learning centre teacher invited me to run the learning centre business with him. And so I started working as a learning center manager. Because the job involved creating student recruitment advertisements, I went to bookstores to look for some references. I found a copy of Ogilvy on Advertising. That book became the key that inspired me to join the advertising industry.

LBB> What was it about David Ogilvy’s book that inspired you so much?

Michael> When I bought the book, I only intended to learn how and what I needed to do to create recruitment ads for the learning centre. However, I stayed up all night finishing this wonderful book on advertising. It made me realise that the ad industry was full of cleverness and fun, and I came to see the amazing impact advertising can create. I suddenly had the idea that I should join the ad industry instead of a TV station or the learning industry.

LBB> How did you land your first advertising role?

Michael> As luck would have it, several months later I saw a recruitment ad in the newspaper titled “Create Advertising Together with Ogilvy.” That was an ad posted by Ogilvy Taiwan as Ogilvy established a branch here. They were looking for copywriters with at least two years of experience. Obviously, I was not qualified.

However, because I desperately wanted the opportunity to join the industry, in addition to carefully preparing my resume, I wrote an ad for myself, hoping to convince Ogilvy Taiwan to give someone like me with zero experience a chance. The headline of my ad was “Green Apple? Rotten Banana?” and the content involved a metaphor to emphasise that a person with no experience in copywriting and no copywriting portfolio was the one most deserving of their decision. I was lucky enough to win an opportunity to the written and oral parts of the interview because of it. In the end, I joined Ogilvy Taiwan as a copywriter. Thus, my life in advertising, which is full of a sense of freshness, began, and continues till today.

LBB> What were your biggest learnings from that job?

Michael> Ogilvy Taiwan placed a lot of emphasis on training and I was able to sit in on many advertising courses, which helped me rapidly come to understand the industry. This learning period was profoundly meaningful to me. I discovered that in this industry, continuous learning is critical and helpful. Thus, to this day, I still consider myself a greenhorn in the industry, and keep learning new methods and possibilities.

LBB> How much has digital and social media altered the industry in Taiwan in recent years?

Michael> Because of the development of social media and the digital world, the ad industry in Taiwan has generated more diverse content. From videos to comics, memes, games, augmented reality, and virtual reality, people in the industry utilize increasingly diverse tools, and their work becomes even more fun. Many barriers have been broken.

For example, videos mostly are no longer limited to 15s, 30s, or 60s. Creative people and directors are given more than sufficient time to depict characters and build up stories. In the meantime, as the power of social media rapidly shapes topics, the content of advertising also needs to induce enthusiastic discussion and sharing on the internet. Likewise, clients have gradually dared to try unconventional advertising.

LBB> Tell us more about the Braun Formosa Chang campaign that used a famous beard to sell more of the shavers.

Michael> Braun × Formosa Chang (AKA Beard Chang) was one of the two bonus ideas with our annual proposal to our client. The client liked it so much that it became our annual campaign. However, back then, we were not certain Formosa Chang would be willing to allow its logo to be altered, since it is a famous fast-food chain brand in Taiwan with 60 years of history, and its Chinese name is literally “Beard Chang.” Would it be willing to let Braun shavers shave it off and change its style? Surprisingly, after discussing it with them, our client Formosa Chang was highly interested in this bold collaboration campaign.

We were also very fortunate to have been able to get a famous graffiti group in Taiwan to work with us, and so on a rainy, windy night, they stealthily shaved the big beard on Formosa Chang’s sign and turned him into a stylish-looking man. The whole process was recorded as a viral video and immediately caused a sensation on Taiwan’s social platform. As the topic went viral, the two brands clarified that it was a marketing event collaboration. Each of them launched joint promotion activities that drew a large number of young people to participate in the activity of creating new looks for Formosa Chang, thus achieving a win-win marketing effect for the two brands. 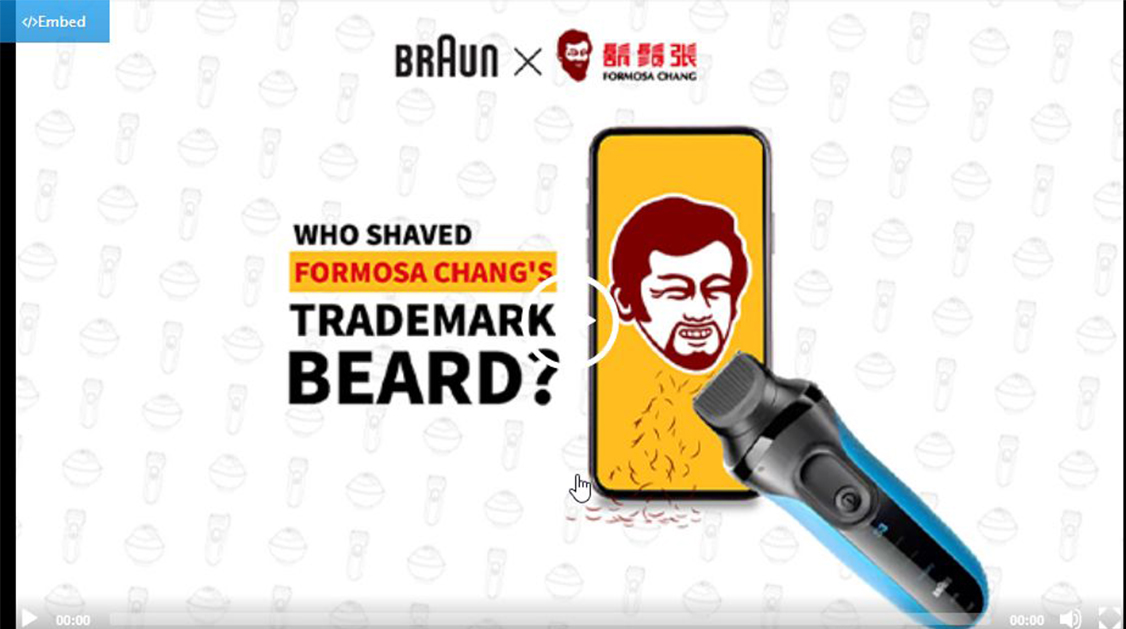 LBB> You’ve been in the industry for 30 years – what have been key moments that stood out to you?

Michael> The moment that had a significant impact on me was when I decided to join DDB China as CCO. This was a critical change that pushed me to leave the comfort zone I had worked in for 20 years and step into a very different market. I also started learning how to work with professionals and clients from around the world, as well as with exceptional local talent. This has broadened my horizons, and increased my ability to participate in international operations. I even obtained a variety of digital work experience and made many good friends during that time. I have always been glad I made this decision back then.

LBB> Who is your creative hero and why?

Michael> There are many creative heroes in my mind. Some of them are pioneers and masters in our industry. Some are artists, architects, movie directors, musicians, chefs, photographers, mangaka, fashion designers, scientists, and so on. I believe that anyone in any field who bravely creates new possibilities and brings changes that other people never thought of can be my creative hero.

LBB> Outside of work, how do you pass your time?

Michael> I like traveling. Traveling to me is a pleasant exploration involving the body and the senses. I prefer to stay at an unfamiliar place for a period of time to immerse myself in it and to feel different cultures and life inspirations. When I am in an unfamiliar place, my senses become sharp, and I can absorb a lot of things that act as nutrients for my mind. During the lockdown period, I even tried to learn from Alain de Botton and travelled in my apartment. But I feel it’s the most challenging tour I’ve ever had.