The rise of a sei-katsu-sha driven society in China

China’s market economy is set to undergo major changes, and ordinary people will be driving them. 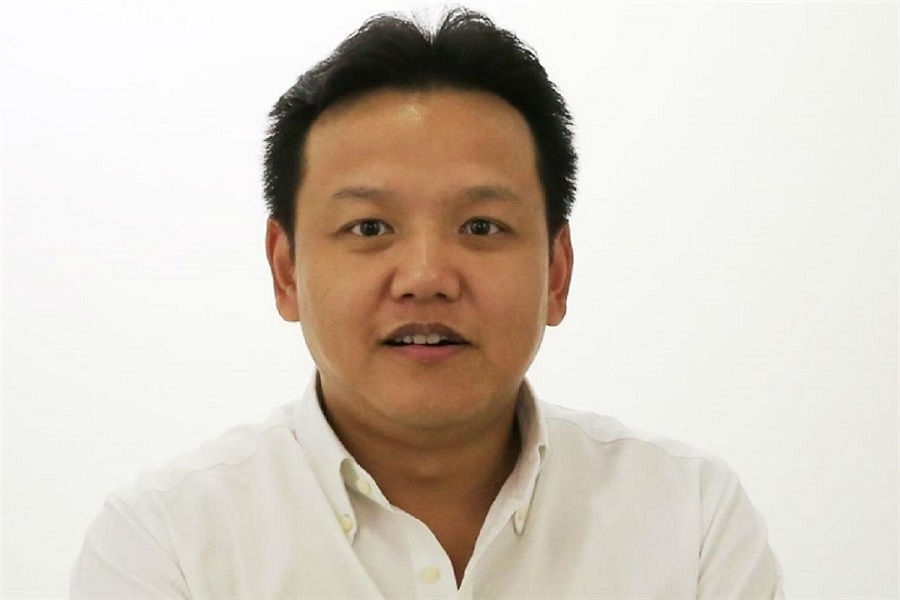 In 2016, for the second year in a row, the number of sei-katsu-sha—the term Hakuhodo uses in place of “consumer” to mean the holistic person with a lifestyle, aspirations, and dreams—living in mainland China who traveled abroad (whether for business or pleasure) shot past the one hundred million mark, reaching 122 million. The total amount spent annually on overseas travel, meanwhile, hit the US$100 billion level, according to data released by the China Tourism Academy.

The Chinese economy continues to grow briskly even as it plateaus—a situation described as the “new normal.” The spending power of Chinese sei-katsu-sha has risen steadily thanks to the economy’s growth. Average personal disposable income in municipal areas (see Fig. 1) has increased by a factor of 2.4 over the past decade to 33,616 yuan per capita, according to figures released by the National Bureau of Statistics of China. 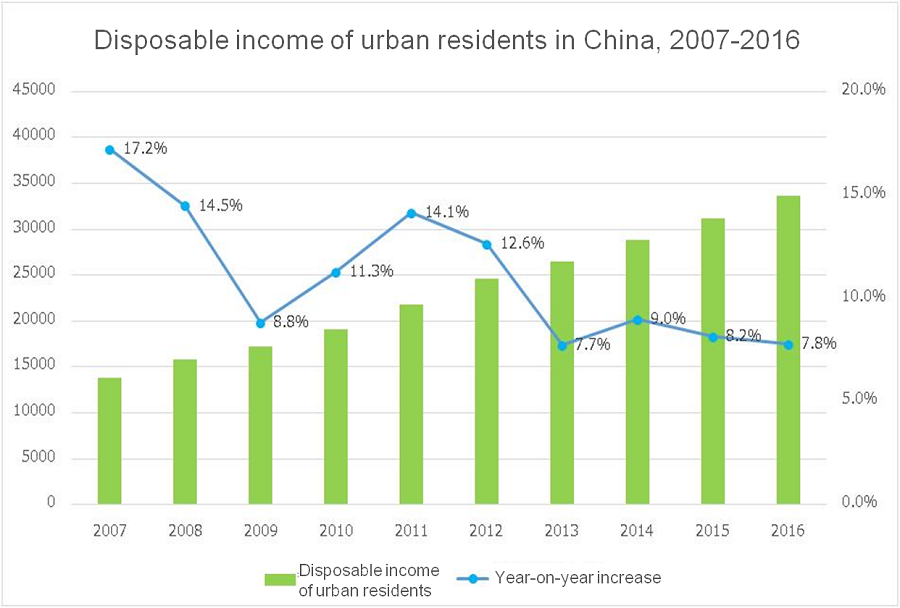 As incomes rise, dynamic changes are to be observed in what Chinese sei-katsu-sha consume and how they do so. Overseas travel affords a case in point. Whereas before many people wanted to purchase foreign goods during their trip, that has changed over the past two or three years. Touring various attractions at one’s destination, and turning one’s stay into a learning experience, is starting to catch on as a new form of vacation. The spread of such “intangible consumption” from the wealthy to sei-katsu-sha in general has been palpable.

The increasing diversity of what and how people consume

As what and how people consume become more diverse, so too do their ideal lifestyles and values. Sei-katsu-sha are no longer content with consuming exactly the same things as everyone else wants, and in the same manner; they have become eager to enjoy the new items and ways to buy them that keep appearing.

Those feelings manifest themselves in sei-katsu-sha’s consumer behavior: they willingly venture beyond the bounds of their present knowledge, abilities, and way of doing things—their existing limits, so to speak—in search of fresh discoveries and experiences that continuously expand their horizons. We have coined the term “Un-framing Consumption” to characterize that set of behaviors and desires. (“Un-framing” here is used in the sense of going beyond the bounds or “frame” of one’s present knowledge, abilities, and way of doing things. “Un-framing Consumption” is defined as expanding one’s present lifestyle and perspectives by means of consumption, and enjoying the resulting freedom.)

Sei-katsu-sha as both buyers and sellers

A fad for starting your own business or working a second job has been sweeping China since last year. Looking at the news and sei-katsu-sha’s actual behavior, it is obvious all around us. A total of 5.53 million new companies were registered in 2016—more than double the 2013 level—according to data from China’s State Administration for Industry & Commerce. That works out to over 15,000 companies being established per day. Thanks to the spread of the Internet, smartphones, and electronic payments, coupled with the expansion of service platforms of all types, it is now easy for anyone to offer goods and services over social media and other platforms.

That trend is being accelerated by increasingly voracious demand among sei-katsu-sha and the growing role of quanzi, a closed, tightknit circle of acquaintances that is a distinctive feature of social relationships in China. Products are often sold through a quanzi network, for instance. We have devised the term “Light Entrepreneurship” to define this new lifestyle pattern whereby anyone can easily start their own business or work a second job, and have fun doing it too. Light Entrepreneurship turns sei-katsu-sha into sellers as well as buyers of goods and services. We regard the rapid proliferation of sellers among China’s sei-katsu-sha as the most salient feature of the Chinese consumer landscape in recent years.

For “The Dynamics of Chinese People 2016—Title Energy,” another set of findings released by HILL Shanghai, we conducted a survey in China, Japan, and the United States on how interested people were in using various services offered by ordinary individuals (see Fig. 2). Chinese sei-katsu-sha displayed a considerably higher level of interest in all the types of services asked about than did their Japanese and American counterparts. That evidently is what underpins the burgeoning of Lite Entrepreneurship in China.

Fig. 2. Services offered by individuals online or via an app that people are interested in using in future: China, Japan, and the US compared 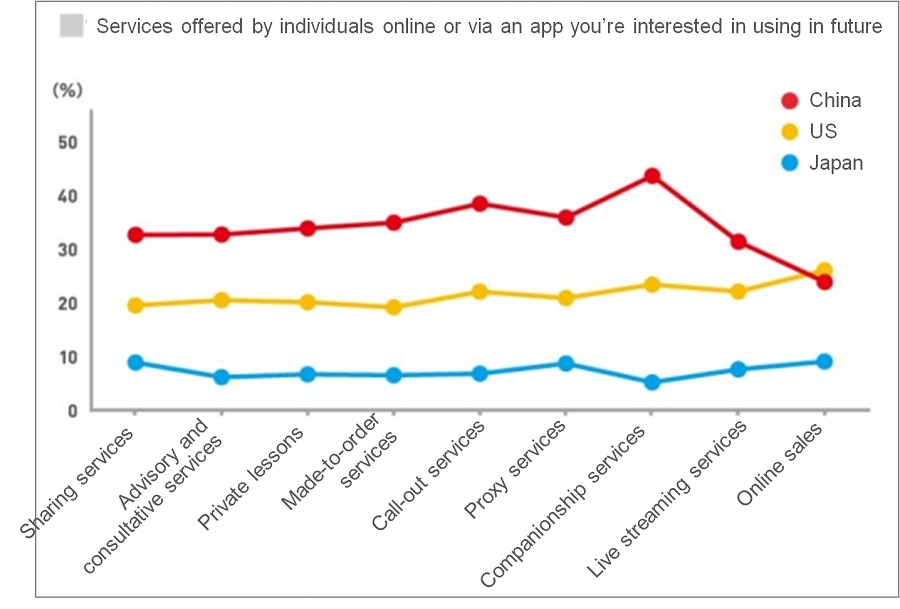 The number of respondents interested in using “companionship services” exceeds 40% in China, making this the top choice there. People use “companionship services” not simply because they want someone else’s help with solving a problem, but also out of a desire for pleasure and friendship. The high level of interest in using such services is typical of China, where personal interaction is cherished.

In addition, a quantitative survey was conducted of 1,968 individuals who sell goods or offer their knowledge and skills to others, and forty were separately interviewed. Based on the findings, we then analyzed the motives that lead sei-katsu-sha to engage in Lite Entrepreneurship in today’s climate—a climate where previous levels of economic growth will be difficult to attain as Chinese society matures, yet technological innovations and the advance of globalization constantly spawn new opportunities.

Some “lite entrepreneurs,” having become aware of new needs among the public in the course of their activities, have assumed a new role in making society a more pleasant place to live, including for themselves, and adopted job titles to match. These lite entrepreneurs with their new titles are unleashing their energy everywhere, and that energy is a massive force for positive change in the lives of the people around them and society as a whole. We have coined the term “Title Energy” to denote the energy with which sei-katsu-sha who play that role in society, and bear associated titles, are working to improve the living environment.

The consumer boom of the past few years and the concurrent fad for starting your own business or working a second job are not in our view separate phenomena. They are, we would argue, two sides of the same coin. One stems from a desire to expand your horizons by seeking out fresh discoveries and experiences; the other stems from a desire to furnish goods and services in response to those new needs, and thus make society a more pleasant place to live, including for yourself.

Sei-katsu-sha have become providers as well as consumers, and the interplay of supply and demand among them will generate a groundswell that brings fundamental changes to China’s market economy while greatly expanding its potential. New forms of lifestyle infrastructure and new business formats will keep appearing, with sei-katsu-sha taking the lead. What we are witnessing in China is the rise of a sei-katsu-sha driven society.

Written by Zhong Ming and edited by Ryoko Tasaki.

Zhong Ming is Chief Researcher and General Manager of Hakuhodo Institute of Life and Living Shanghai.