The Ars Electronica Festival, a vast experience of media art held every September in Linz, Austria, took place September 8-12, 2016. Here is a report on the festival by Kazuko Tanaka of Hakuhodo Group company VoiceVision, who facilitated at the Future Innovators Summit cohosted for the past three years by Hakuhodo and Ars Electronica, and Rena Tanaka of Hakuhodo Creative Human Capital Planning & Management Division.

Ars Electronica: Where our agendas for tomorrow are generated

Have you ever wondered what questions you should be asking yourself about the near or remote future? “How on earth can we set agendas for the future when we can’t even find the answers to the questions we have today?” you may protest. Well, there’s an institution that since its foundation in 1979 has continuously investigated better ways for society to evolve by exploring new trends in art, science, and technology and boldly creating experimental works: the future-oriented Ars Electronica located in Linz, Austria, a city built of stone with a romantic medieval air.

You may have heard of Ars Electronica as a celebration of media arts. But it differs greatly from other art shows and media art festivals in that it focuses on the future issues facing society and poses questions about them in the form of agendas for tomorrow.

The History: the making of the world’s leading center of creativity

Let’s take a brief look at Ars Electronica’s origins. Launched thirty-seven years ago as an arts festival, Ars Electronica was the brainchild of four individuals active in the fields of technology, art, and journalism. Back then the decline of the steel industry had cast a dark shadow over Linz’s future, and the festival began as an effort to breathe new life into the city by making it a center of technology and art.

The festival brings together cutting-edge technology, works of art, and people. The constant focus of the founders’ interest has been identifying the societal impact of media arts applying the latest technology, as opposed to so-called fine art, and in 1987 they instituted the Prix Ars Electronica, which is awarded to best of the works featured after a rigorous evaluation.

The next milestone was the establishment of the Ars Electronica Center-Museum of the Future (photo), jointly run by the city of Linz. As the name indicates, this is, the organizers of Ars Electronica explain, a “center” and “educational facility” where futurological knowledge is amassed and residents young and old are stimulated by experiencing the future, becoming better and more conscious citizens in the process. Thus it differs from other museums in that it is more than just an exhibition facility.

The concurrently founded Ars Electronica Futurelab originally functioned as the content development arm of the festival and Center, but it now engages in interdisciplinary research and development projects spanning academia and industry, seeking to combine cutting-edge scientific knowledge with advanced networking capacity. The Futurelab and Center are located in the same building with only a wall to separate them, which allows them to take quick action: depending on how visitors react to an exhibit one day, it can be modified and redisplayed the next.

Ars Electronica thus consists of four elements functioning as a single ecosystem, which constantly prototypes the future while directly monitoring the impact on living citizens.

Viewed in this light, Ars Electronica, you realize, is more than merely a conglomeration of the latest technology and art. 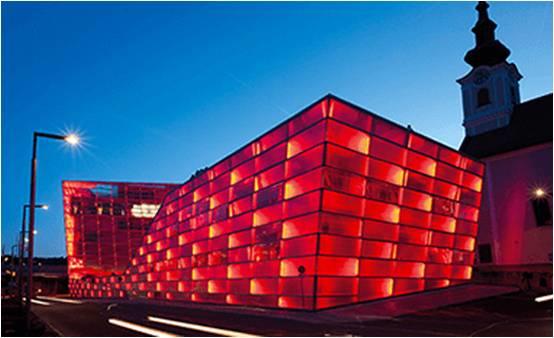 The Ars Electronica Festival: when creativity is unleashed on the future

The Ars Electronica Festival takes place every September, the most pleasant time of the year in this city on the banks of the Danube. It brings together media artists, performers, and scientists from around the world, and each year the exhibits are curated on a specific future-related theme.

This year’s theme, “Radical Atoms,” focused on the fusion of the digital information and the real (tangible objects). It asks what outcomes might await humankind if, for example, information could be stored at the atomic level, leading to radical advances in our concept of what constitutes a physical object. The title was taken from a concept propounded by Professor Hiroshi Ishii, Associate Director of MIT Media Lab at the Massachusetts Institute of Technology (MIT). The festival showcased every form of artistic expression — biotechnology, smart textiles, digital interaction, performances, robotics — ranging from the avant-garde to the experimental. The theme may sound a bit abstruse, but think of it as a question of turning information into tangible objects: then you may cotton on. 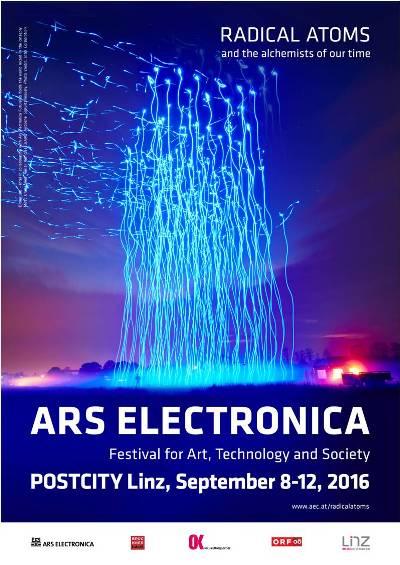 The festival brought together more than 500 exhibits from across the globe and attracted some 90,000 visitors.

“Ars Electronica is a forum for dialog, which is why I come every year no matter how busy I am,” says one Japanese researcher-cum-artist. There are exhibitions matching the subject of her research in Japan as well. But she still insists on flying from Japan to Linz at the busy beginning of the academic term in September, changing planes on the way, because the festival lets her share and discuss her questions as a researcher with other artists and thus obtain pointers on how to proceed next.

Ars Electronica members use the term “dialog art.” Participants explore future-related concepts by asking each other questions, which dialog is itself prototyped as art; hence the long list of conferences on the program that bring together people from many different backgrounds. It’s almost as if the Futurelab has designed this series of events to set off chemical reactions between people as one of the festival’s creations; a colossal artwork where individuals interact.

In the next issue we will report on the Future Innovators Summit jointly organized by Hakuhodo and Ars Electronica. 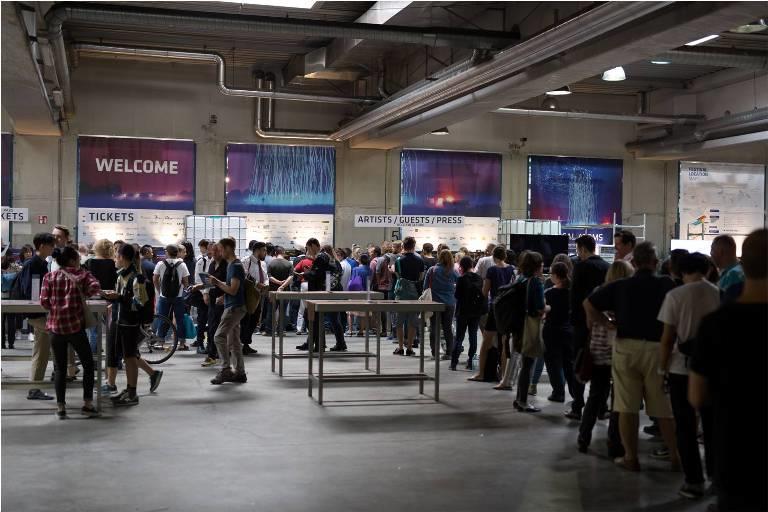 One of the venues is the PostCity, which used to be the Central Post Office. The photo shows the ticket booth at the entrance. Here you can buy a festival pass that also gives you access to the other exhibition and conference sites in Linz. Photo: Florian Voggenedeer. 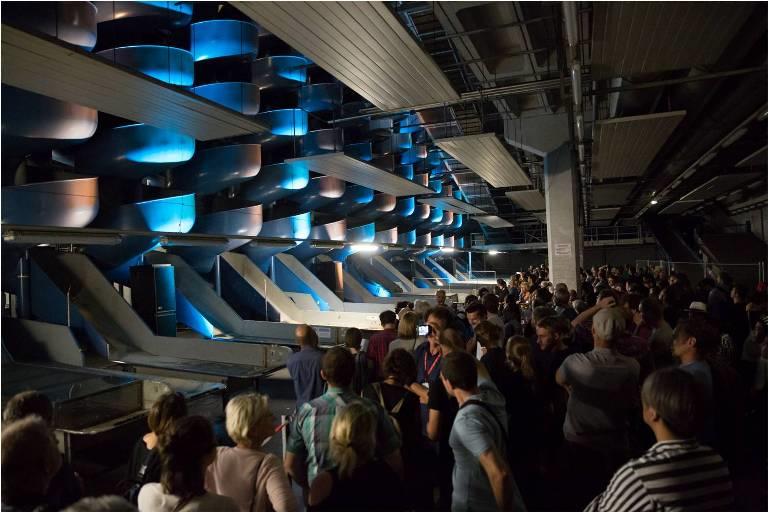 Audience waiting for the show to begin at the old post office’s distribution center. Here in this massive interior space, christened Spiral Hall, a performance was staged using the slides down which letters and parcels were once sent. Photo: Tom Mesic. 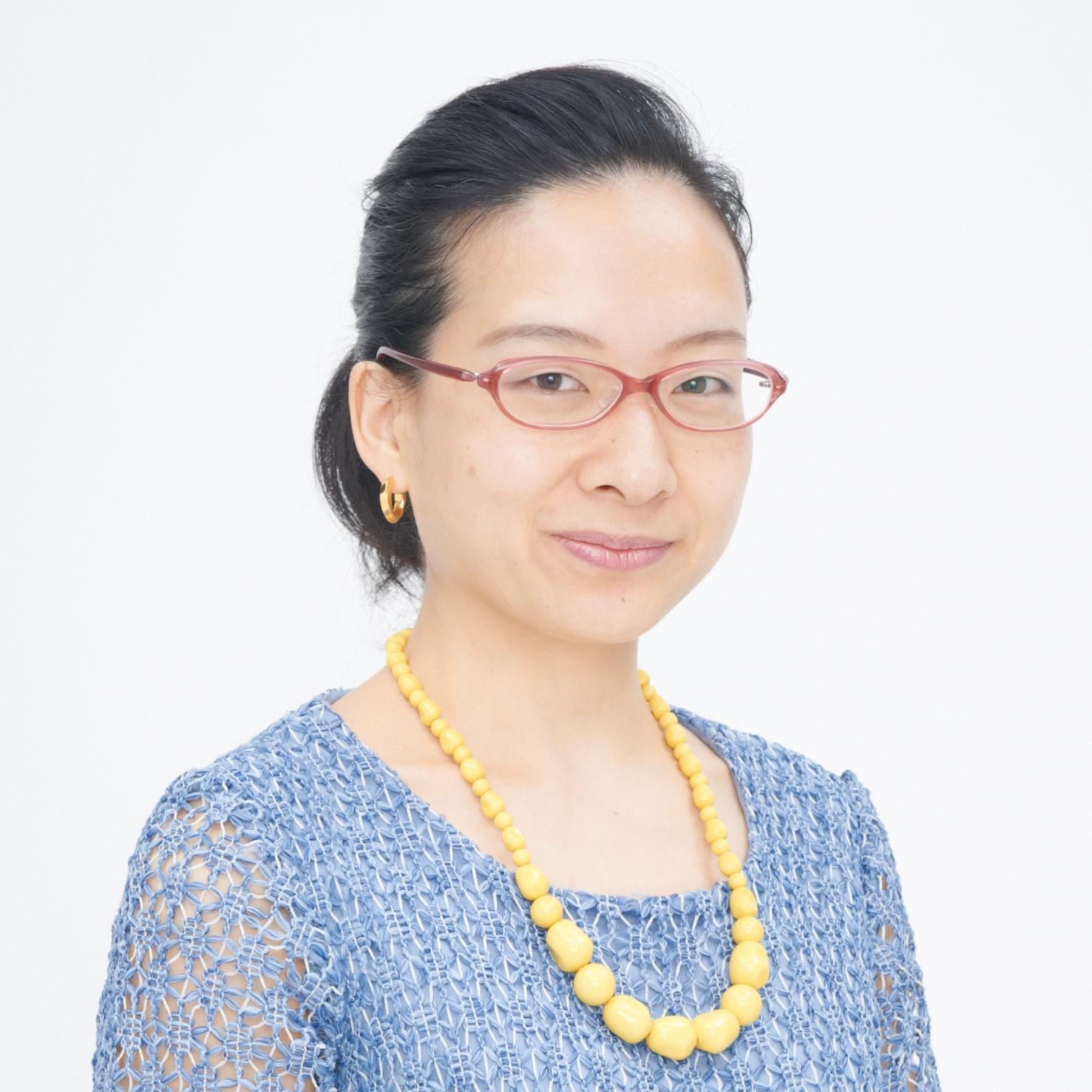 Kazuko Tanaka
Executive Community Producer, VoiceVision Inc.
Leader, Hakuhodo Working Moms’ Link
Kazuko Tanaka joined Hakuhodo in 1998 and, after a stint in foreign client services, worked on collaborative projects with leading foreign marketing firms. In 2012 she established the network Hakuhodo Working Moms’ Link to champion the cause of working mothers, drawing on her own experience bringing up children. To date the group has organized lunchtime get-togethers for more than 500 working moms at 50 companies. In 2014 she joined in the set up of VoiceVision Inc., which specializes in sei-katsu-sha co-creation. She advocates a new culture of working and parenting through a Facebook site designed to give working moms a voice, which now has nearly 30,000 likes. In April 2014 she served on the jury in the digital community category at Ars Electronica. She is the co-author of To Working Moms: Thirty Words to Energize Working Moms (published by Kadokawa). She is the mother of two sons and a daughter. 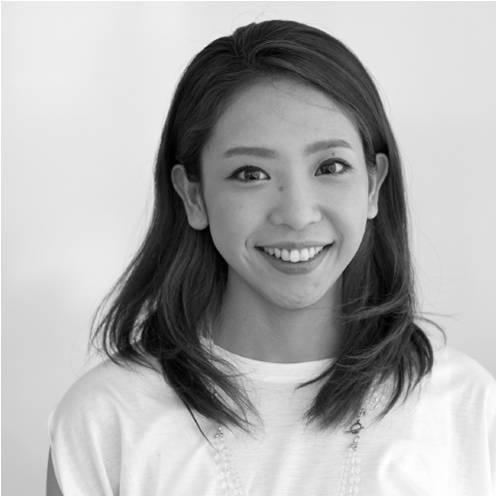 Rena Tanaka
Creative Producer
Hakuhodo Creative Human Capital Planning & Management Division.
Rena Tanaka joined Hakuhodo in 2007. As a member of an account team, she conducted brand communication planning and worked with a wide array of companies on production of advertising, new product development, strategic branding, and media planning. She assumed her present position after becoming interested in ways to turn ideas into business.
SHARE
Back to News & Insights