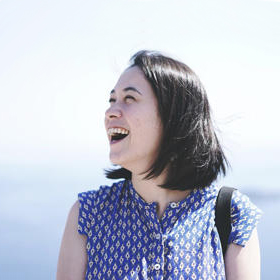 The Institute of Elder Knowledge and New Adult Culture is a Hakuhodo think tank specializing in researching and marketing to people aged 40 and older, who we refer to collectively as the adult generations.

Today we are witnessing the rise of new contemporary adults, particularly among people aged 60 and older, drawing a sharp distinction from past notions of “seniors” and “old people.” This group is distinguished by a rich proactive and pioneering spirit and a sensibility to go out and enjoy life. This group is also large, as it begins with the baby-boom generation. Our role is to identify and make visible the values and attitudes of these new contemporary adults and make use of this information in marketing. See our website [http://www.h-hope.net/ (in Japanese)] for more details. In this essay, I will present one of our research topics using data from the Seikatsu Teiten Survey.

One topic we’ve been paying attention to recently is relation-driven consumption. This might be an unfamiliar term to most of you, but what it means, simply put, is consumption behavior triggered by word of mouth or recommendations. Relation-driven consumption includes things or gifts purchased after hearing about them from someone. Tendencies among younger generations are easier to spot by following their behavior on social media or with attitude surveys, but they are harder to visualize for adult generations because there are few survey panels for these generations and they are not as active online. So data from the Seikatsu Teiten Survey are a natural fit for analyzing past and present adult generations because they provide a bird’s-eye view of people aged up to 70 over a long period. Without further ado, let’s look at trends in relationships and consumption among adult generations.

Seniors and older people in the recent past have tended, after retiring, to join existing groups or organizations like neighborhood associations or seniors’ clubs. The generation of new contemporary adults, however, starts to build new individual relationships of their own free will. In 1997, 67.7 percent of people in their 60s said they participate in a group or organization, a figure that dropped below half, to 48.6 percent, in 2016. 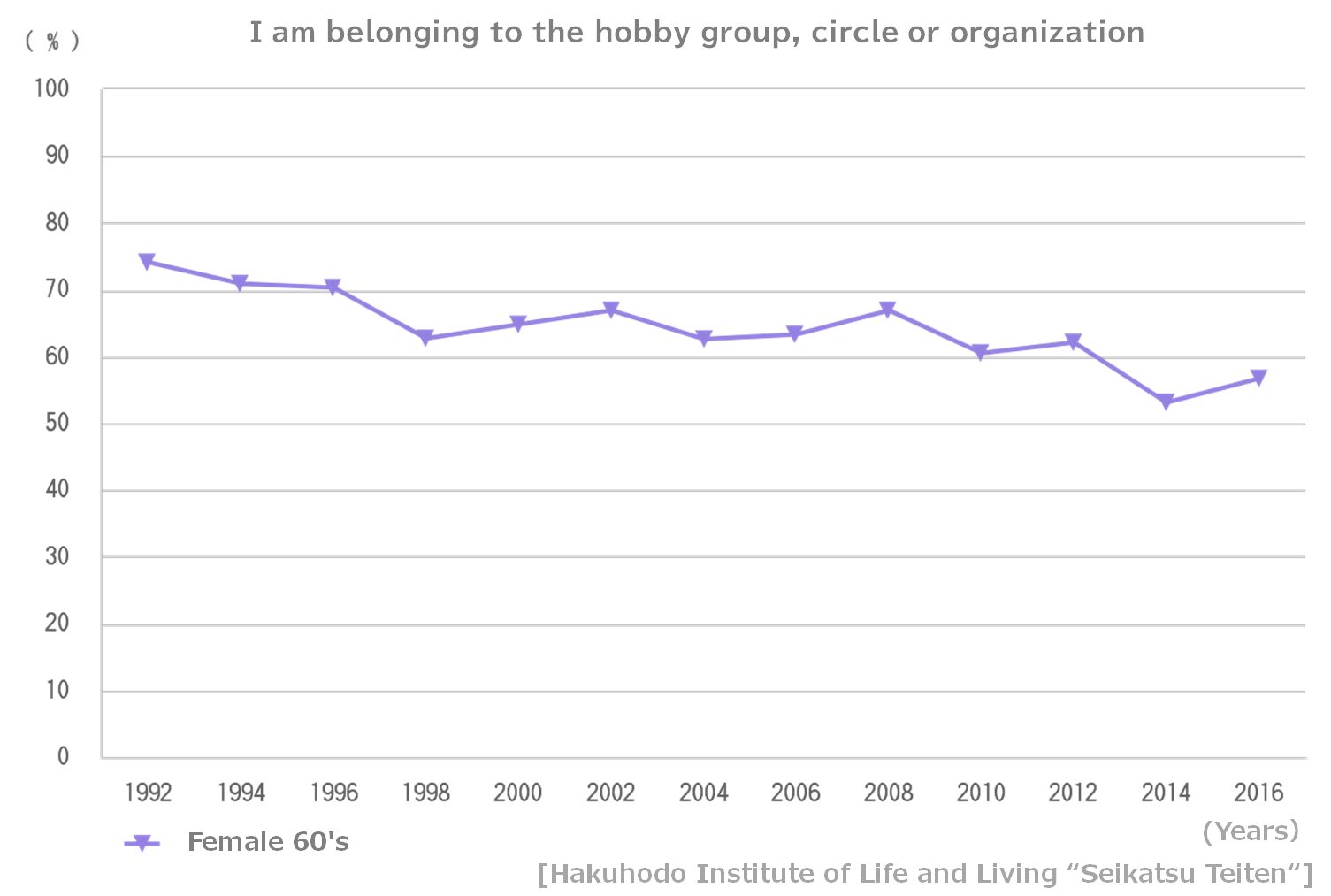 It appears that the generation of new contemporary adults, who don’t affiliate with established organizations, are more active socially than previous generations. For example, consider this finding. The percentage of people in their 60s who answered “I consciously differentiate how I contact people according to our relationship, even with friends” doubled in 18 years from 10.2 percent in 1998 to 19.8 percent in 2016. We have corroborated that new contemporary adults have a multitude of relationships — not just neighborhood friends but also gym friends, hobby friends, and old classmates, to name a few — in recent qualitative studies on relation-driven consumption run by the Elder Business Development Division.

Another aspect of this generation is their take-up of efficient means of communication using social media and digital devices. The number of people in their 60s who answered “I have friends I communicate with only by email or social media” has grown in just the last two years. These findings together paint a picture of a shift from relationships in which one joined an existing group and socialized with everyone on an equal basis to an orientation in which one picks and chooses who to associate with and efficiently manages multiple relationships. 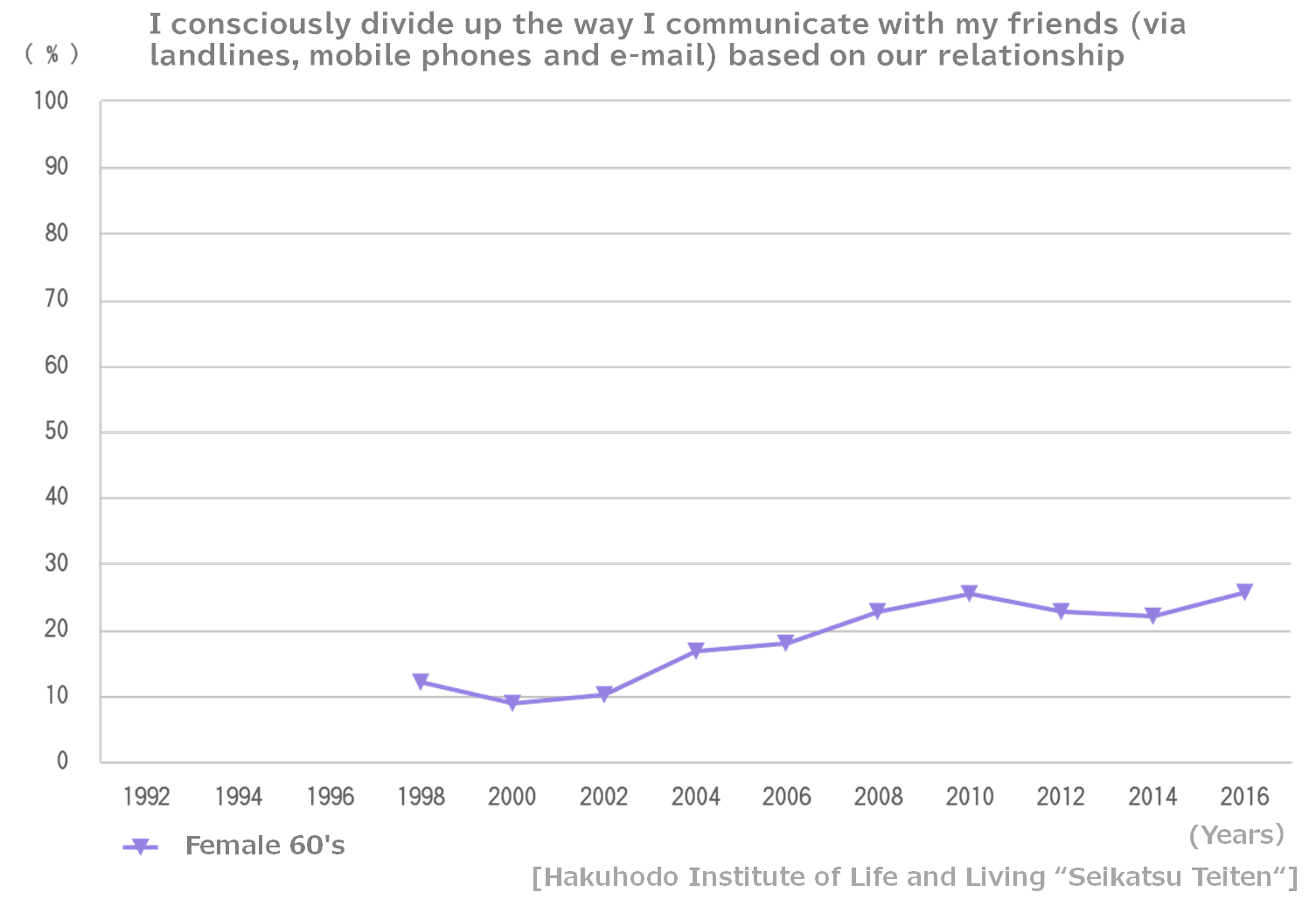 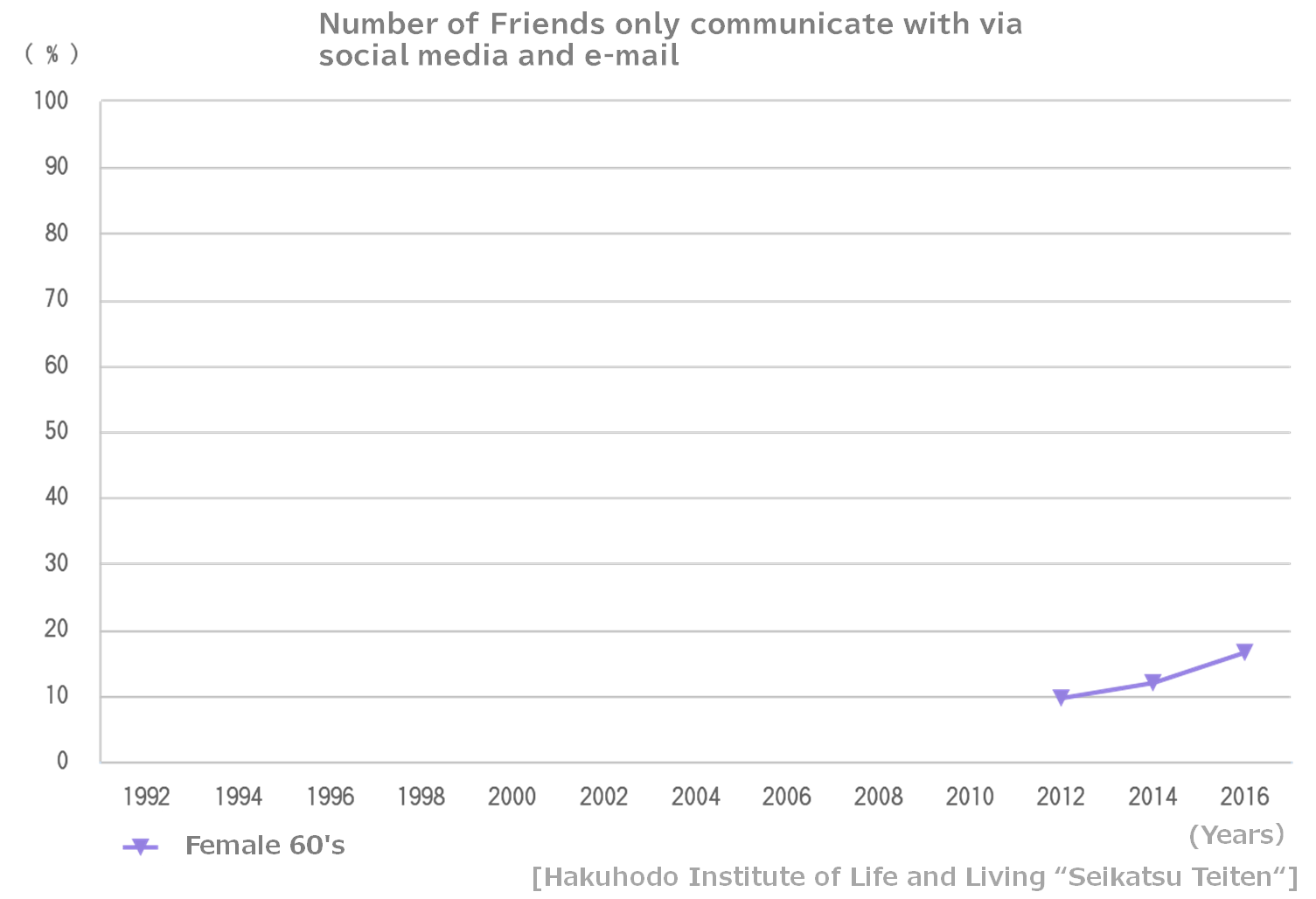 From the relationships of new contemporary adults that I’ve described so far, what changes have surfaced in the form of relation-driven consumption as far as recommendations and gift exchanges? There are some intriguing data about exchanging presents and gift-giving among the generation of new contemporary adults. In 1994, 75.2 percent of people in their 60s said “I give o-seibo year-end gifts without fail every year,” a figure that fell to 55.6 percent in 2016. The same trend held for o-chugen Bon Festival gifts. 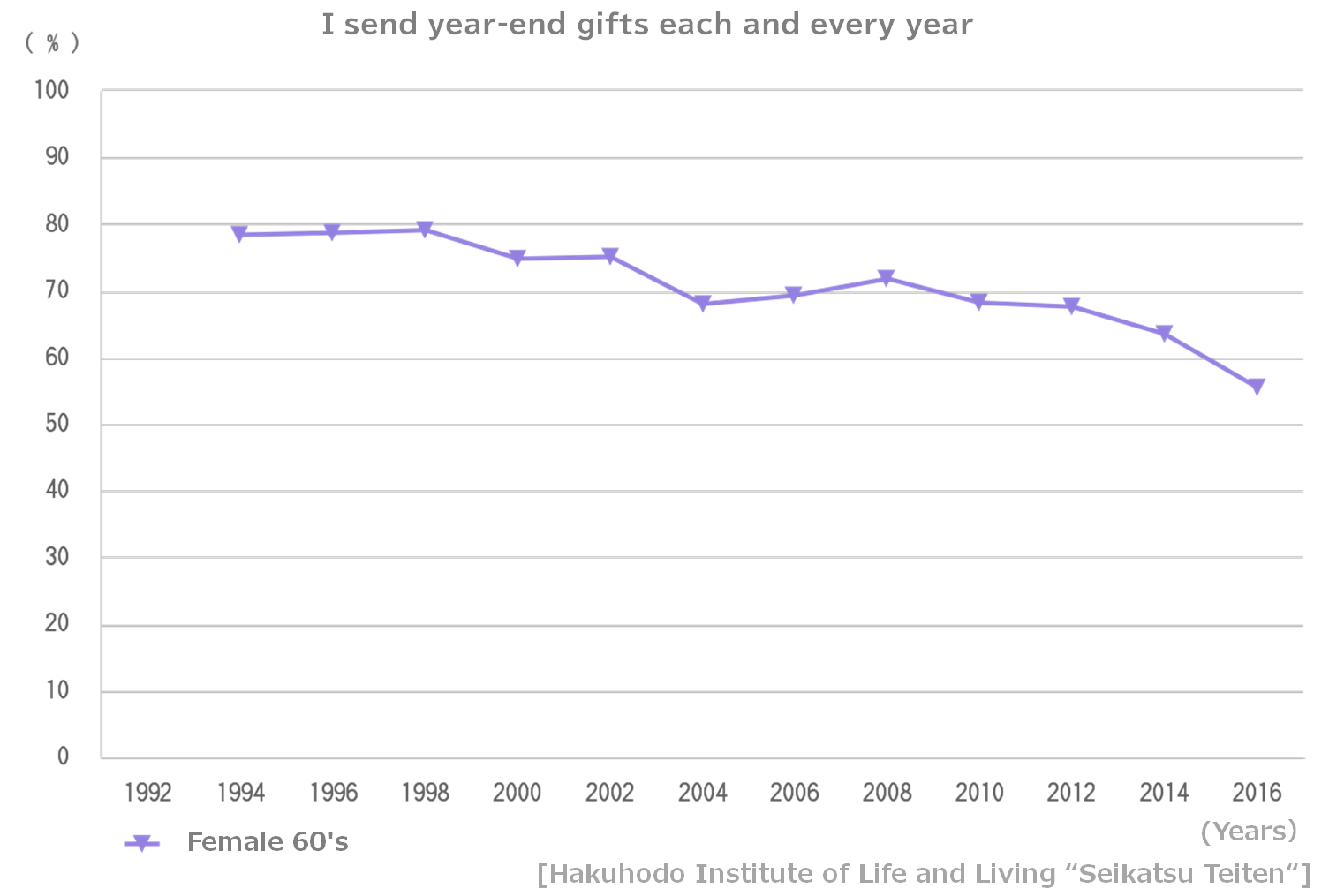 On the flip side, more people in the generation of new contemporary adults give birthday presents. Looking at people in their 60s, the percentage jumped about 16 points from 48.6 percent in 1998 to 64.4 percent in 2016. Where relation-driven consumption among seniors and older people involved o-seibo year-end gifts and other gift exchange customs, new contemporary adults give gifts to celebrate the birthdays and other accomplishments of individuals. This demonstrates that changes are occurring in the approach to consumption that gives form to relationships. 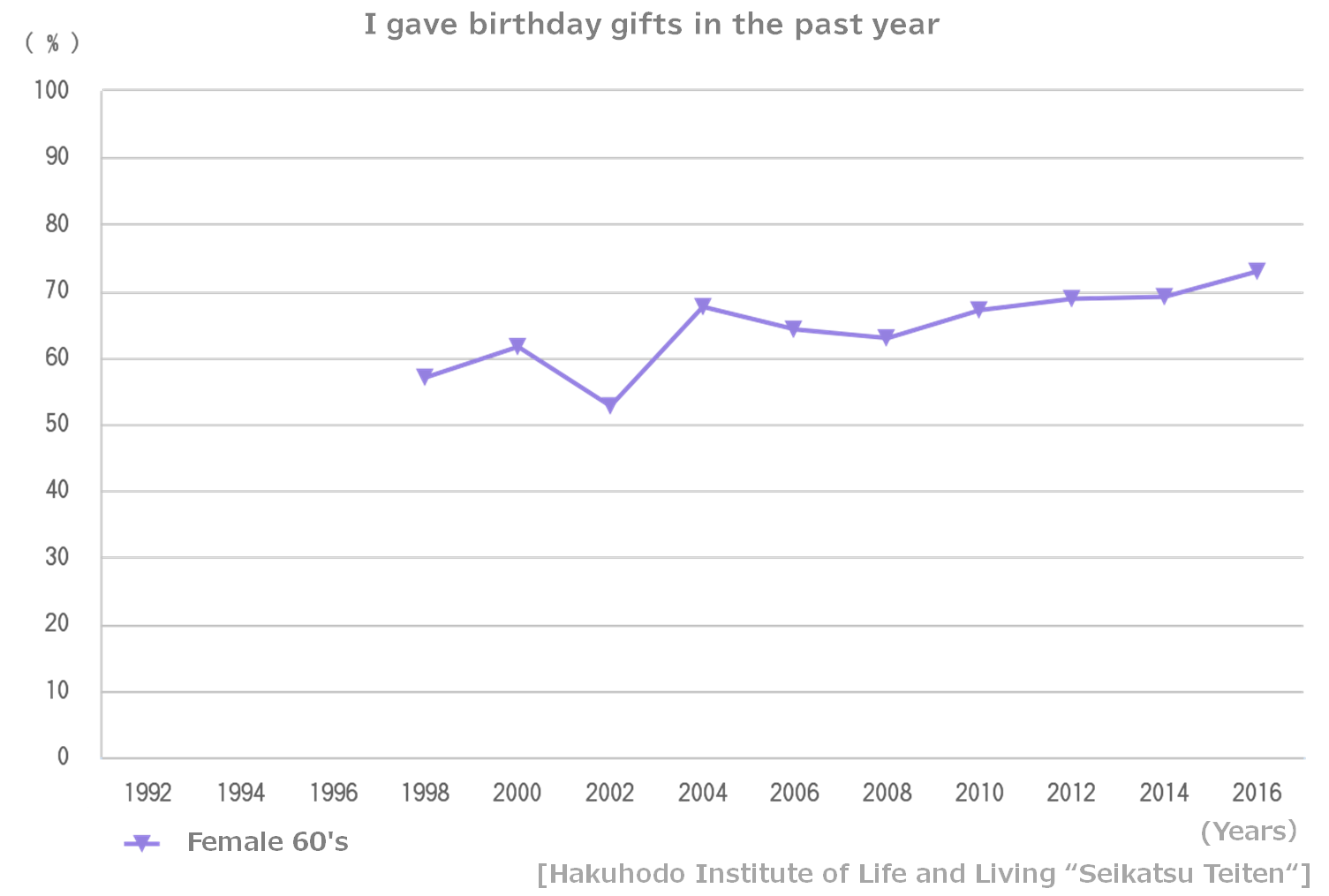 For new contemporary adults, relationships are infrastructure and consumption is the lubricant to maintain and affirm relationships

This essay has looked so far at current and past relationships and consumption among adult generations with a focus on data from the Seikatsu Teiten Survey. I’d like to end with a short sidebar on the Institute of Elder Knowledge and New Adult Culture’s hypothesis on why these changes have occurred. Previous seniors and older people took for granted that they would lead lives of leisure in retirement, given the solid infrastructure of their family and community. For the generation of new contemporary adults, including those in lower-income brackets and those living alone, such infrastructure is not necessarily guaranteed; indeed, they are coming face-to-face with the reality that they must build and maintain such infrastructure on their own. The Institute of Life and Living defines friends who improve the quality of each other’s lives and support each other as infrastructure friends. I believe the new relationships the rising generation of new contemporary adults is forming are very similar to this kind of infrastructure-building.

In this context, there may be a growing role for gifts and other relationship-driven consumption to act as lubricant to affirm and maintain these infrastructure-like relationships. This is precisely why birthday gifts that celebrate individuals and cement relationships, and not customary gift exchanges, are better suited to the needs and circumstances of new contemporary adults.

The orthodox view would tend to see the current adult generation in a negative light, due to the anxiety, compared to past generations, of not having guaranteed infrastructure. But another part of the equation is the freedom the adult generation enjoys with the end of caring for their children and their corporate careers. Moreover, this generation finds the idea of spending the rest of their lives bound to a specific organization or group somewhat suffocating. They would rather choose for themselves whom they will associate with and enjoy shared interests and conversations, while recommending products and services to each other and celebrating each other’s achievements. And it appears more than anything, they want to truly embrace life.