Service developed jointly with Cybermart Group of China. In its initial run, will attract customers visiting Japan from China, Taiwan and Hong Kong to stores during the Chinese New Year holiday.

CyberGO is a solution that simultaneously promotes store visits and stimulates sales among visitors from China, Taiwan and Hong Kong by providing them with store information and discount coupons for discount electronics stores, restaurants, drugstores and other retail outlets through a smartphone app. Combining free Wi-Fi router rental for international visitors with an app they download, CyberGO sends a wide variety of information to several thousand*1 international visitors.

CyberGO conducts lottery campaigns involving free Wi-Fi router rental and app downloads in the departure countries at major local travel information sites, airlines and airport terminals, financial institutions and other places where large numbers of Japan-bound tourists gather. By acquiring participants and registering them as members before they depart, CyberGO exposes visitors to information early, promoting decisions to visit stores and purchase goods before they even reach Japan. Location-based store information search, and discount and other push notifications are also sent to members (visitors) during their stays, making it possible to further increase motivation to visit stores while they are in Japan.

The solution was trialed at an electronics discounter in Tokyo in December 2014 to great success, with many shoppers deciding which stores to visit and what products to purchase on the basis of the discount coupons and incentive information they received. The service has now commenced full.

*1 2,000 Chinese visitors/month expected in the first Chinese New Year period. This number is expected to increase
progressively with the expansion of the service area, etc.

operation, attracting customers to many client companies during the peak Chinese New Year holiday sales rush in mid-February, when international visitor numbers soar. With numerous companies, including an electronics discounter, restaurant information provider, drugstore chain and department store already signed up, expectations are high. The service area in Japan will be gradually expanded, with the Kansai region (Osaka, Kobe, Kyoto and surrounding prefectures) to be added in May, and Hokkaido in October.

Hakuhodo and Cybermart’s goal for FY 2015 is to attract 70,000 customers to its client companies’ stores, creating 7 billion JPY in client sales. The goal for FY 2016 is to create 20 billion in client sales on the back of increasing visitor numbers from Korea and ASEAN countries, and the expansion of client company numbers and CyberGO’s service area.

Provide notice of lottery campaign involving free Wi-Fi router rental and product discounts when traveling in Japan at major travel information sites, airlines and major airport terminals, financial institutions, in magazines, and on the Internet and social media, etc. in the departure country.

Select winners who will receive free Wi-Fi router rental from among applicants based on where they will stay and other criteria. Winning travelers pick up their Wi-Fi routers and download the CyberGO app at special counters set up in the airport they will depart for Japan from. 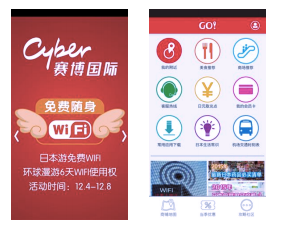 CyberGO app screen shots. In addition to discount coupons, a variety of information of interest to travelers is sent

(3) Promotion of store visits, stimulation of sales with discount coupons

Send location-based push notices containing information about stores to members based on location information obtained by the app. The app also allows searches for stores and products at the member’s location. Discount coupons for relevant stores appear on members’ screens. 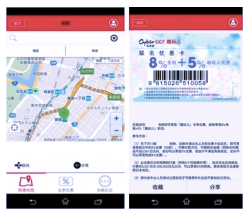