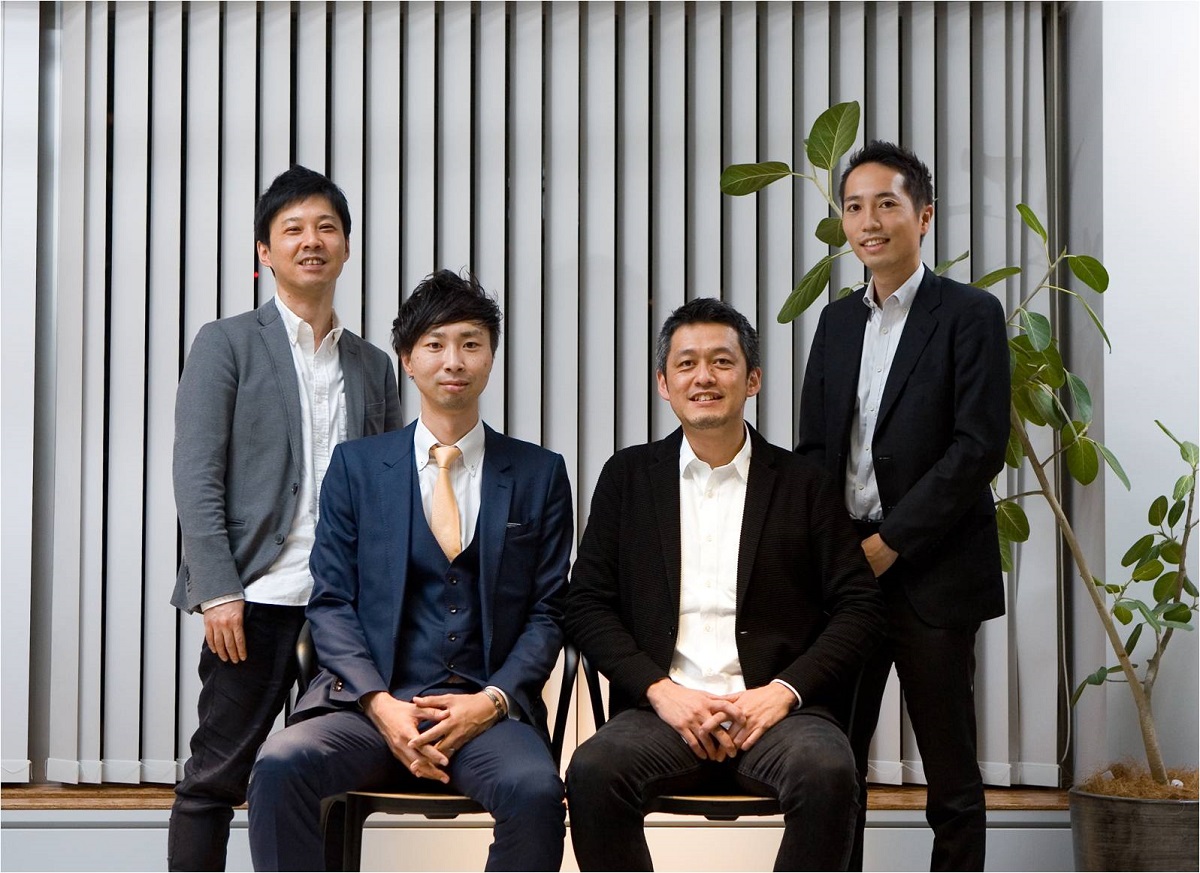 Hakuhodo has recently teamed up with astamuse company, ltd., which has access to data on new enterprises and new technology and investment information possessed by research institutions and business ventures in eighty countries across the globe. The two companies have formed the Connecting Dots Action Program to provide end-to-end support with innovation.
(For further details see http://www.hakuhodo.co.jp/archives/announcement/41432 [in Japanese])
Astamuse prides itself in its critical eye for technology. Hakuhodo has a flair for ideas underpinned by its philosophy of Sei-katsu-sha Insight, which sees people not merely as consumers but as individuals with real lives. What services might emerge when the two meet? We asked Shintaro Shimazaki and Tomoya Hatano of astamuse and Ken Donoue and Sho Otsu of Hakuhodo’s Business Development Division.

DONOUE: While we’re both with the Business Development Division, we’re constantly pondering business possibilities outside the field of advertising and publicity. We’ve talked to people at over 3,000 client firms, and we’ve found that in recent years there’s been a huge increase in clients seeking advice about research and development, business development, and business planning. It’s certainly fair to say that innovation is all the rage these days. Many clients are under pressure to innovate, no matter how, but they have no idea where to start. And each company faces multiple challenges. They don’t have people to spare for innovation. They don’t know what to research. Their ideas never reach commercialization. Given that state of affairs, we concluded that they must need someone to be with them for the entire journey from initially selecting a research topic to taking actual action, whether business incubation or service development.

OTSU: Hakuhodo has experience identifying target audiences, working with clients on actually generating customers in society, and carving out markets. That, we believe, is for Hakuhodo the equivalent of innovation. When it comes to creating new markets, what we excel at is always being right alongside the client as an agency while working with different professional players, whether they specialize in marketing or events or commercials. During development of new business, there are players who draw up business plans and players who mock up prototypes and players who do matching, but right now, I understand, they often operate in isolation and aren’t well coordinated. I believed we had the ability to be the one that brought them all together, that focused on the big picture.

SHIMAZAKI: As you just mentioned, Mr. Donoue, terms like innovation and open innovation have taken on a life of their own. I think several challenges exist today, including the failure of the players involved to work out why exactly innovation is needed, and the inability to go beyond research and development to the next stage—what is called the “Valley of Death.”

Based on our experiences to date, I get the impression that consulting firms are good at putting the finishing touches on something existing but aren’t very good at creating something utterly new. Companies that provide matching services are good at building relationships by gauging the chemistry between the different parties, but they don’t have a deep understanding of the technology each company possesses, so that innovation fails to scale up. So unless those who provide support with innovation and those who receive it get back to the basics, innovation won’t take off in Japan. Of that I’ve long been convinced.

HATANO: Working in corporate communications, I often find there are similar challenges to those that Mr. Shimazaki has noticed in his job in business operations.

Astamuse provides support with developing new business, applying technology, and recruiting personnel by tapping data on new technologies and enterprises required for innovation, which is amassed from eighty countries worldwide. We take pride in the strengths we possess and the services we offer. But we’ve also come to feel that astamuse can’t provide the full range of innovation support on its own, having observed how we’re reported on in the media and how outsiders react to that. 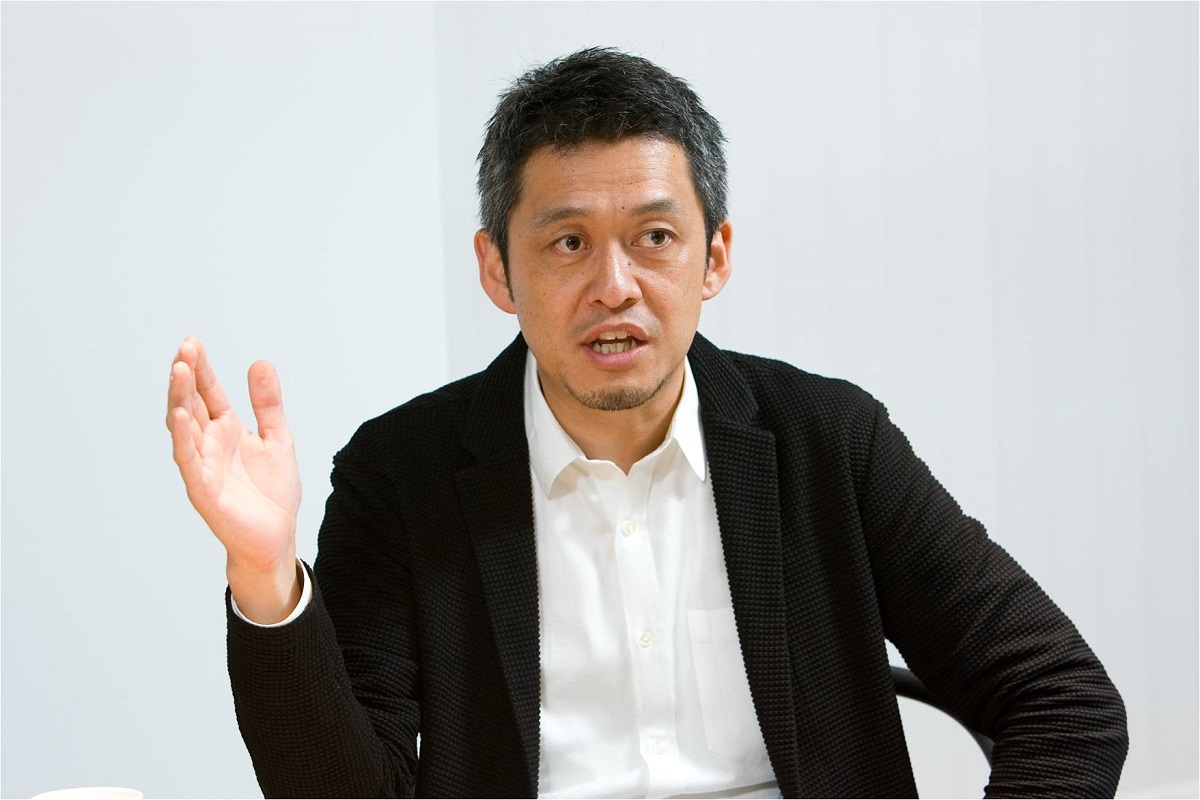 Ken Donoue of Hakuhodo’s Business Development Division, leader of the project at the Hakuhodo end

DONOUE: Clients turn to us for advice in two broad categories: first, technology-driven initiatives, and second, sei-katsu-sha driven initiatives. Being an advertising agency, we’ve been working on sei-katsu-sha driven projects for a long time, and naturally we’re good at partnering with clients in advertising and marketing. But to be honest, we don’t have a very good knowledge of the former—technology-driven initiatives in the business development and R&D fields. So we were looking for a company to work with us, and that’s when we discovered astamuse. I was like an unrequited suitor: I kept pestering them to meet me [laughs].

SHIMAZAKI: Even before I met Mr. Donoue, I’d already decided, in fact, that if we were going to partner with anyone, it was going to be Hakuhodo. Astamuse possesses an abundance of objective factual information and fact-based materials in the form of data analytics, as Mr. Hatano has described, and it occurred to me that if we could add a human touch to that, we could offer lots of interesting ideas.

I’d always liked the feel of Hakuhodo’s creative work when I looked at its advertisements, so it was like the cogs meshed at the moment I met Mr. Donoue.

OTSU: The first thing we did was work together identifying our respective strengths, capabilities, and weaknesses in terms of providing support in the innovation field—strategy, R&D matching, and so forth. We drew up a list of some fifty items in Excel and marked each with a checkmark or an X, and discovered that we were remarkably complementary. It was really like the pieces of a puzzle fitting perfectly. 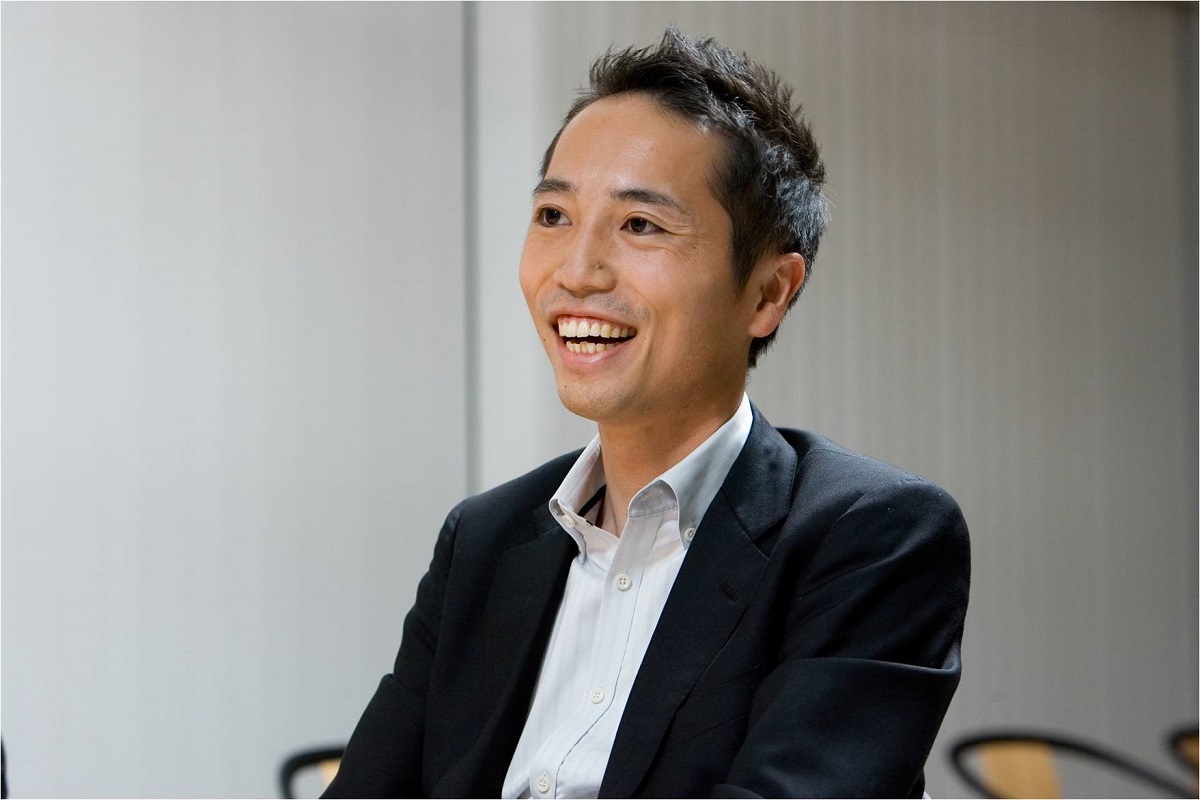 HATANO: Not only did the pieces of the puzzle fit perfectly, personally I also had a favorable impression of Hakuhodo because of its support with bringing Ars Electronica (a festival of cutting-edge technology and art held in Linz, Austria, since 1979) to Japan. I was of the opinion that in order to identify and overcome the challenges facing society, cutting-edge technology and art, and initiatives in which ordinary people themselves were involved, would be essential at the stage when changes were implemented in society. So when I learned what Hakuhodo was doing in partnership with Ars Electronica, it struck me that we had very similar ideas indeed.

SHIMAZAKI: Definitely. When suggesting a possible new enterprise or coming up with ideas for a business or service, we must never forget to ask ourselves what challenge that new enterprise or service will help solve. It’s vital that the new enterprise be essential to or of benefit in solving a challenge society is grappling with. Overcoming society’s challenges helps bring happiness to ordinary people in their daily lives. This is one of our aims in doing business, and in that regard we’ve maybe been similar to Hakuhodo from the start. 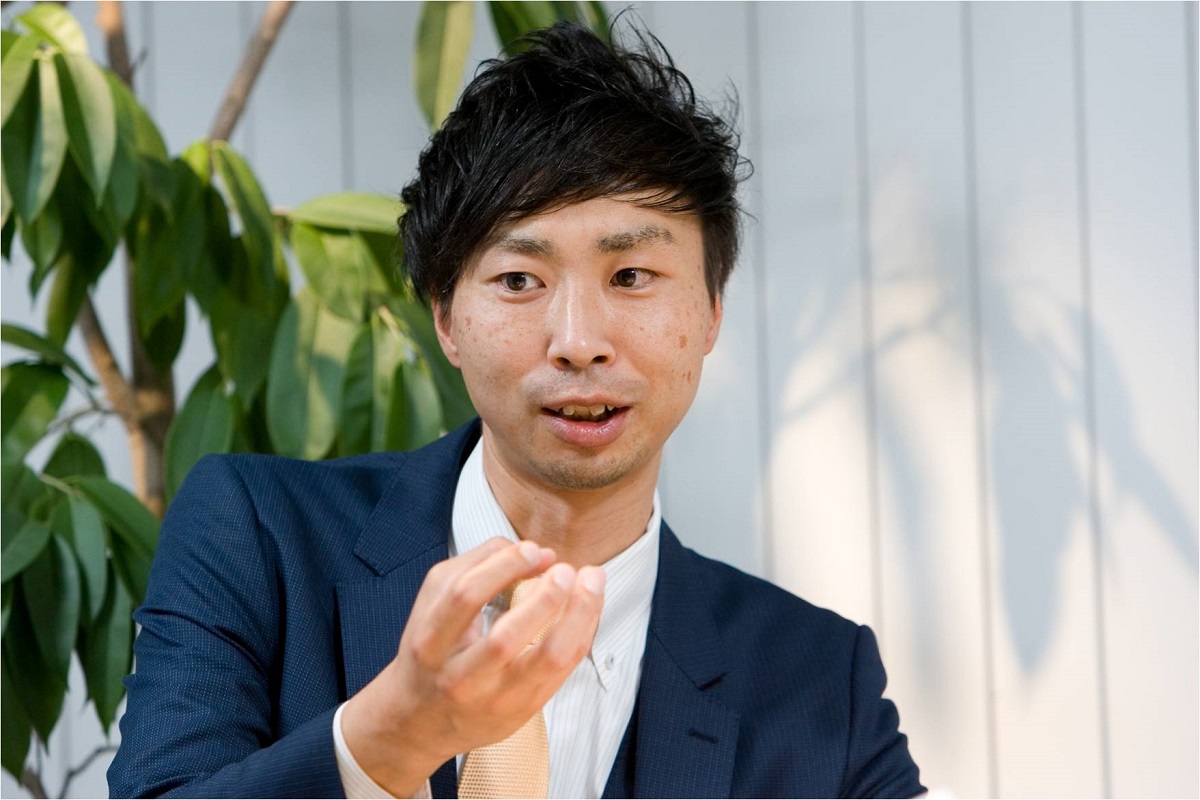 Implications of the word “Action” in the project title

HATANO: We first met around June, and the partnership was announced three months later. One thing that really struck me was the way you moved the discussions along at virtually the same speed as we’re used to, and we’re a startup with just fifty people.

OTSU: It’s gratifying that you feel that way. We didn’t bring out the news release until we’d set up the Connecting Dots Action Program, which may be fairly rare. If I may digress for a moment, we’ve already applied to trademark the name of the program. We want to make this program work really well in the medium to long term.

DONOUE: Incidentally, the name of the program, the Connecting Dots Action Program, didn’t originally include the word “Action.” We stuck it in when the two of you mentioned that the biggest challenge facing clients was translating ideas into actual action. We did so to express our commitment to offering viable proposals and seeing them through to action, up to and including the creation of new markets.

Specifically, we focus mainly on assisting companies of a certain size in developing new businesses while introducing clients to each other. We look forward to working in our respective fields of excellence in accordance with our clients’ concerns, while relying on each other as partners.

SHIMAZAKI: Conventional innovation support is almost always sporadic in nature. A service like ours that does it all, from kickoff and planning to bringing the thing to market, must be quite novel. Hopefully we’ll be able to change traditional perceptions of innovation support, and set off a trend that attracts numerous individual and corporate players. 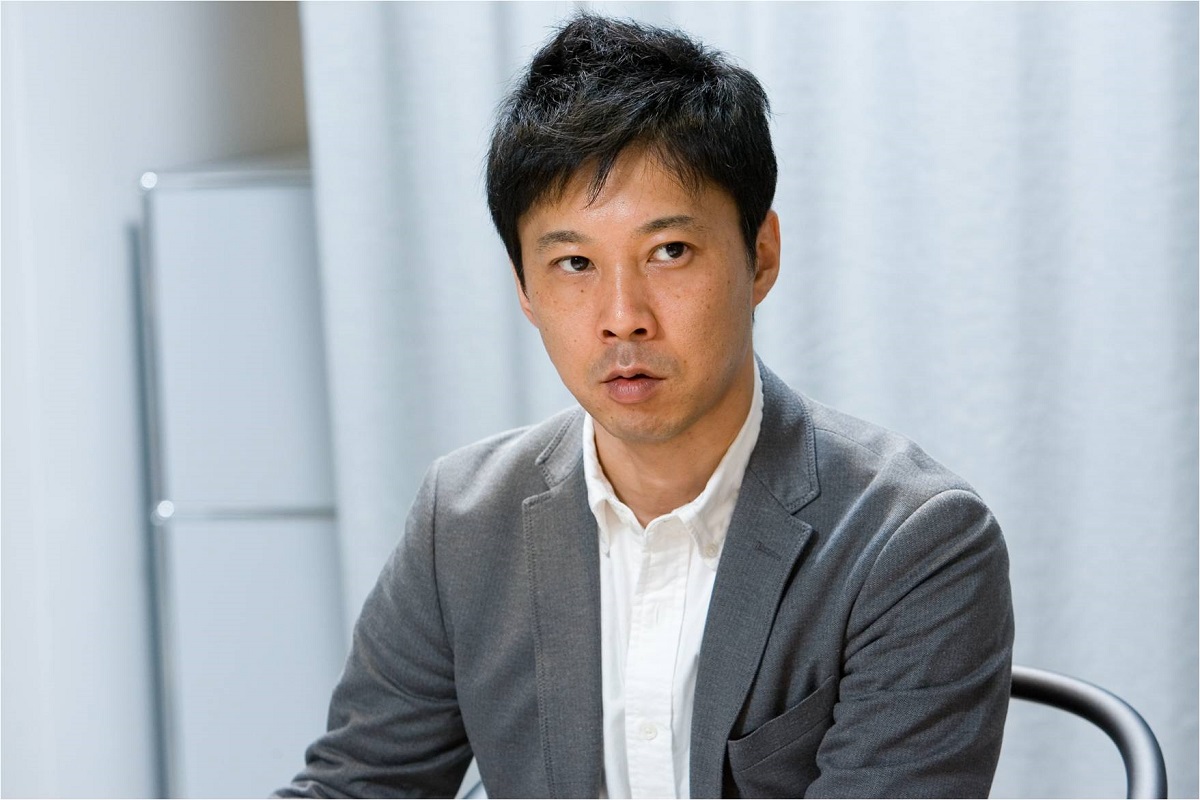 Innovate by backcasting from the society we envision in the future

SHIMAZAKI: This program has a lot of potential. What we’re interested in now is providing support to big corporations that have only engaged in B-to-B transactions before but want to expand into B-to-C as well. What new businesses could they move into by leveraging the technology they already have? We have expertise in commerce with both businesses and consumers, and that should be an endless source of cool ideas. For example, a company that has spent decades exclusively in the B-to-B field probably has no idea how to reach consumers and ordinary people; but we can offer one-stop help with how to promote their business or service to the public and how to brand it, from both the technology-driven and sei-katsu-sha driven standpoints. The same applies to large corporations that have for years focused mainly on B-to-C but want to give B-to-B a go as well.

DONOUE: Japan today has completely lost the innovative edge that once amazed the world and spawned new markets. Looking ahead to 2020 or 2025, what kind of a society do we want to build in the future? Backcasting from there, we need to create innovations right here in Japan that transform society. Of that I’m absolutely convinced. How nice it would be to pull off a few coups that get the children of today thinking in the future, “We’re so well off today because Company X came up with this great idea back then.” The greatest obstacle to innovation is doing nothing for fear of failure. Let’s hope companies screw up their courage and start forging ahead with us.

HATANO: Your remark about the children of today in the future reminds me of something. We regularly deal with large numbers of researchers and startup entrepreneurs. Many of them are in their early twenties, the same age as the undergrads Hakuhodo offers jobs to and the newly minted graduates it hires. Talking to them, they give the impression of looking at the future realistically and with a sense of their own role in it. In pursuing a research or development project that will take decade or two, they are motivated by a clear awareness that they will be the ones inhabiting the world after it comes to fruition. It would be great if the Connecting Dots Action Program could respond to the enthusiasm of young people who are tackling innovation so energetically and provide support.

DONOUE: For sure. At the same time, it’s also vital that people at the CXO level assume leadership in furthering innovation. It’s hardly likely to yield fruit if it’s done on the side as part of the company’s existing business or left to chance.

OTSU: There’s lots of Japanese technology that attracts international interest. The now-ubiquitous smartphone, for example, is to a considerable extent underpinned by Japanese technology. But for all its excellence, Japanese technology today doesn’t yield output that successfully translates into business, that has an impact on society. That’s really such a waste. By coupling astamuse’s expertise in technology with Hakuhodo’s philosophy of Sei-katsu-sha Insight and our vision for the future, we hope to be able to create business success stories that have a global impact.