What the movie experience means today

What does the term “movie experience” conjure up in your mind?

For many people it conjures up the idea of watching a movie at the movie theater. Indeed, box-office revenues from movie-theater admissions are regarded as a key indicator of which movies are hits and how the film industry as a whole is faring.

Take the past three years, for example (Fig. 1). Two years ago, in 2016, the Japanese movie market set a new record with revenues of \235.5 billion thanks to a pair of historic blockbusters, Your Name and Shin Godzilla (AKA Godzilla Resurgence). And while 2017 was not as sensational as the previous year, it still placed second with revenues of \228.5 billion as hits such as Beauty and the Beast were released.

These quantitative indicators of box-office revenues give the impression that Japan’s movie industry has been booming over the past several years. But what qualitative changes has it witnessed?

Qualitative changes in the movie experience as seen in the data

This survey contains a number of questions about movies, including what respondents consider priorities as movie watchers.

Particularly striking is the fact that the percentage of people who consider the story a priority fell by 20 points between 2015 and 2017 (Fig. 2). A drop of 20 points over a three-year period is significant indeed. On the other hand, the priority that recorded the largest rise between 2015 and 2017 was the movie theater where the movie is shown (up 11 points). This suggests that people attach importance to the accessibility of the movie-watching experience (in terms of time and ease of getting there).

These two changes give rise to a hypothesis: that sei-katsu-sha—the term we at Hakuhodo use in place of “consumer” to mean the holistic person with a lifestyle, aspirations, and dreams—are now more interested in the movie-watching experience itself than in the movie’s content, such as the story.

To examine this hypothesis, let’s look at some further data. 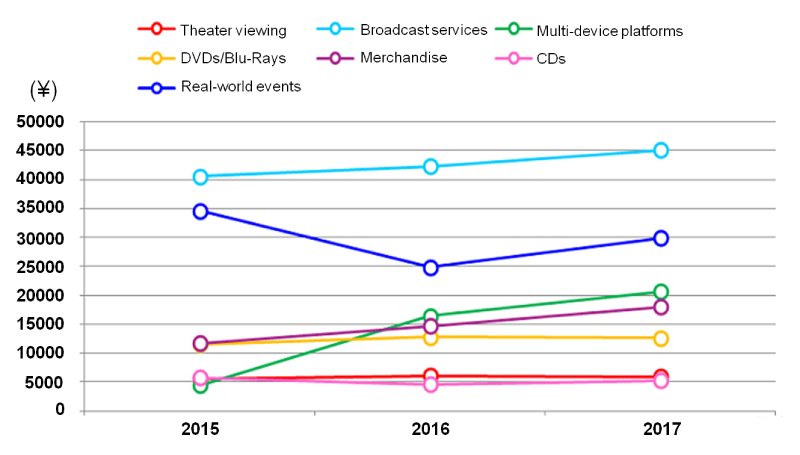 The survey asked not only about spending on viewing movies at the theater but about a variety of other movie-related expenditures as well. Fig. 3 gives a comparison of the average amount spent annually on each item per spender. The largest expenditure was on broadcast services, which climbed from approximately \40,000 in 2015 to \45,000 in 2017. Broadcast services here means satellite TV channels and cable TV.

The second largest expenditure was on real-world events, which stood at approximately \35,000 in 2015, then declined in 2016 before rising again in 2017. This category includes attending movie-related events and visiting movie locations and facilities, as opposed to simply going to the movie theater. One gets the impression that over the past few years there has been an increase in such events and post-moviegoing activities (screenings of Shin Godzilla where the audience gets to scream and shout, screenings of King of Prism where the audience cheers the characters on, La La Land in concert, pilgrimages to locations that appear in Your Name like Suga Shrine).

The third largest expenditure was on merchandise in 2015 but on multi-device platforms in 2017. Spending on the latter quadrupled between 2015 and 2017 from approximately \5,000 to \20,000. Subscription streaming services have spread like wildfire in recent years thanks to the increase in smartphone ownership. Before going to a movie that particularly intrigues me, I now often prepare myself by watching related works first on a subscription streaming service; I did so less often before. That is the kind of change that has shown up in the numbers.

Redefining the movie experience around time and spending

As we’ve seen, there are now more ways than ever to enjoy movies thanks to the evolution of media devices and the advent of new services. Of course, going to the movie theater, where you can immerse yourself in the film’s world in spacious surroundings complete with audio equipment, undoubtedly delivers a rich movie experience. But we often tend to think of the movie experience as being virtually synonymous with going to the movie theater.

Now that there are so many different ways to enjoy a movie, going to the movie theater is only one aspect of the movie experience. 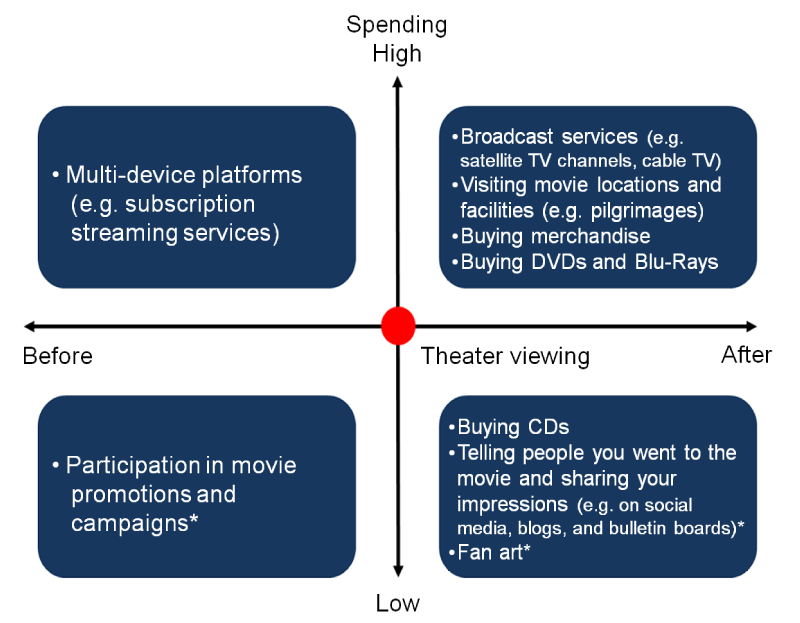 *Participation in movie promotions and campaigns, telling people you went to the movie and sharing your impressions, and fan art were not included in the survey, but they are added here as typical elements of the theater experience.

Fig. 4 roughly plots the expenditures asked about in the survey and other elements that make up the movie experience. The horizontal axis represents time and the vertical axis represent spending, with theater viewing at the center.

Before you go to a movie, watching related works on a subscription streaming service or other multi-device platform, or simply taking part in a movie promotion or campaign, is a vital part of the movie experience in that it stokes your theater-going expectations. And after going to a movie it is now common, thanks to the spread of social media, to post images of yourself showing you’ve been, and share your impressions and upload fan art. Information behaviors like these have, alongside highly visible forms of consumption such as purchasing merchandise and DVDs, Blu-Rays, and CDs, become an important part of the movie experience unique to our day and age.

Above I postulated that what sei-katsu-sha want from a movie has changed: they are now more interested in the movie-watching experience itself than in the movie’s content.

Movies have long enjoyed an unassailable position as an entertainment experience that stimulates all the senses to the full. That experience will doubtless be further enriched through the use of virtual and augmented reality, as well as other technologies that have yet to see the light of day. For example, virtual reality can be used to deliver an experience that truly immerses you in a world on film. Designing an experience that better capitalizes on how a movie theater enables people to enjoy a movie with others in real time and space (e.g., a VR system for multiple users or a movie experience that varies depending on how people interact) could add value to the movie experience.

But it’s not just a question of high-tech theatrics. Redefining the movie experience around time and spending suggests that sei-katsu-sha’s movie experience these days goes far beyond mere movie watching to embrace much more.

Given today’s rapidly changing media landscape, ways to enjoy a movie will doubtless continue to multiply. I am convinced that as long as those who make movies, and those who watch them, enthusiastically embrace these expanding possibilities, more people will enjoy movies than ever, and in a more profound and enduring way. 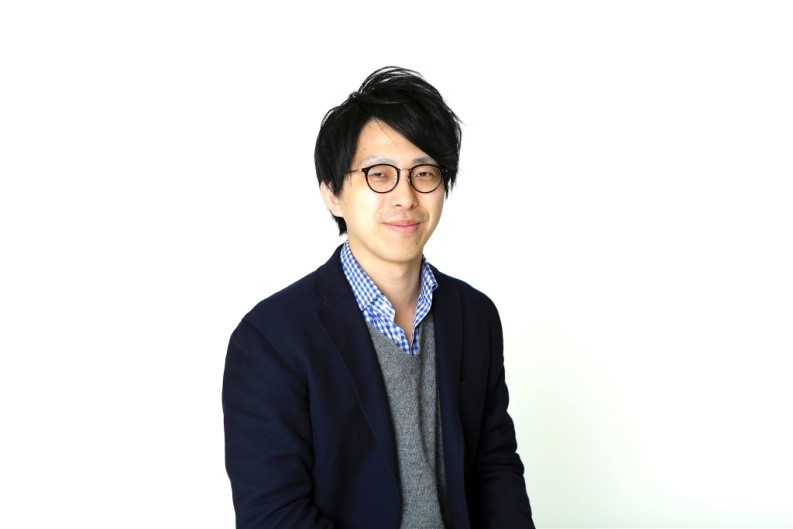 Suguru Kawai
Content Business Lab
Media Content Business Center
Hakuhodo DY Media Partners
Suguru Kawai, who joined Hakuhodo in 2011, spent six years in marketing working on product development and communications strategy for retailers, distributers, broadcasters, food companies, and startups. He has held his present position since 2017, where he provides business solutions to media companies and content owners. He watches almost a hundred movies a year at the theater.
SHARE
Back to News & Insights