Hello. I am Ikumi Baba of the Hit Habit Makers.

The weather was still so hot until the other day, but now it’s gotten chilly all of a sudden. The temperature has dropped so much that long sleeves are no longer enough; you need a jacket too. I haven’t just been complaining about the cold, though; last weekend I dropped by a spa facility near home to get warm. It was a delight to soak in the hot spring after so long. No experience to be had in the neighborhood could be more satisfying.

In this installment we’re going to examine a new phenomenon—background location—related to such neighborhood outings. When relaxing at home or driving, a lot of people are in the habit of putting on background music (BGM) that suits their surroundings. Background location (BGL) is the reverse. It’s the practice of deciding where to visit based on the content you’re enjoying, in the form of music, fiction, or whatever.

Let’s take a look at some specific methods. First, you can choose a destination for its musical associations. An app has already been released that lets you search for somewhere musically suitable. It’s linked with a music app so you can search for recommended locations by song title or whatever. It even has a feature that recommends locations frequented by people with similar musical tastes to yours. It’s long been the norm to search for a coffeeshop by googling the name of the district and “café”; now more and more people have gotten in the habit of searching with song titles instead.

Second, you can decide your destination based on a novel you like. I know a real bibliophile, and once when she and her fellow booklovers were going to get together, they looked for a retro café that would match the tone of a novel they were really into, which was set in the Taisho period (1912–1926). Apparently they had a great time chatting away, not least because of the ambience. There are many other genres of books besides fiction, so readers could visit different locations depending on their book mood at the time.

As for dining, while there have always been restaurants devoted to specific cuisines, today there is a growing tendency to prioritize location and the ambience of the surroundings more than ever. Especially now when it’s almost impossible to travel overseas, it’s becoming more and more common for people to visit Chinatown and immerse themselves in a single culture both before, during, and after their meal. Others, conversely, enjoy the illusion of hopping from country to country by visiting a neighborhood with lots of restaurants in close proximity serving different national cuisines.

The spread of the background location phenomenon can be attributed primarily to changes in people’s outing habits as a result of COVID-19. Now that traveling domestically has become so difficult, let alone travelling overseas, it appears there’s a growing desire to seek out attractive places not too far from home. Indeed, a survey of tweet volumes using a custom Hakuhodo tool reveals that tweets including the world “daytrip” have risen steadily in Japan since the state of emergency was lifted. Many people are posting on social media about the fun they’ve had despite being unable to travel very far and take their time. 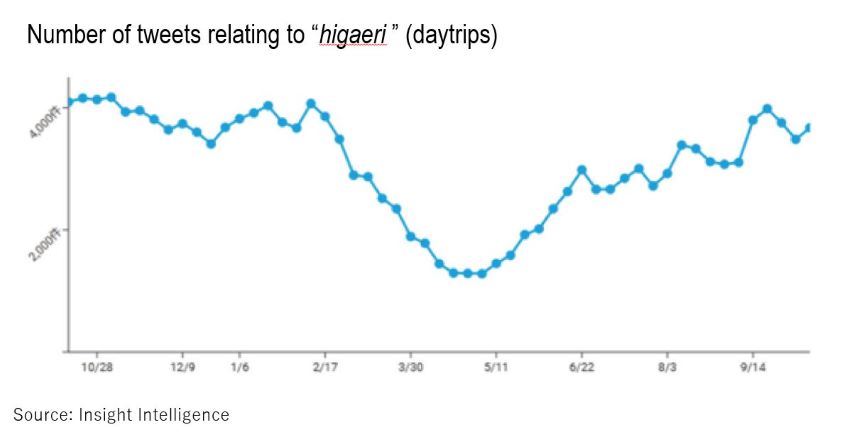 It’s fair to say that, because people’s options when it comes to choosing a destination for a trip or outing are now so limited geographically, they’re using a new criterion to decide where to go: content. A new pattern of travel has thus emerged from the COVID pandemic, one resembling the “color trip,” where people decide where to go based on their favorite colors or colors they want to see.

Finally, let’s consider what business opportunities the background location trend might lead to.

Examples of “background location” business opportunities
■ A travel agent offering a service that lets you search for a travel destination using the title of a piece of music or book, or using photos
■ When releasing a new novel, attaching a list of the best coffeeshops for reading it at
■ Developing a VR content service that displays video optimized to music
And so on.

If any of you reading this is wondering what to do with your next day off, why not try finding somewhere new close to home by trying background location? 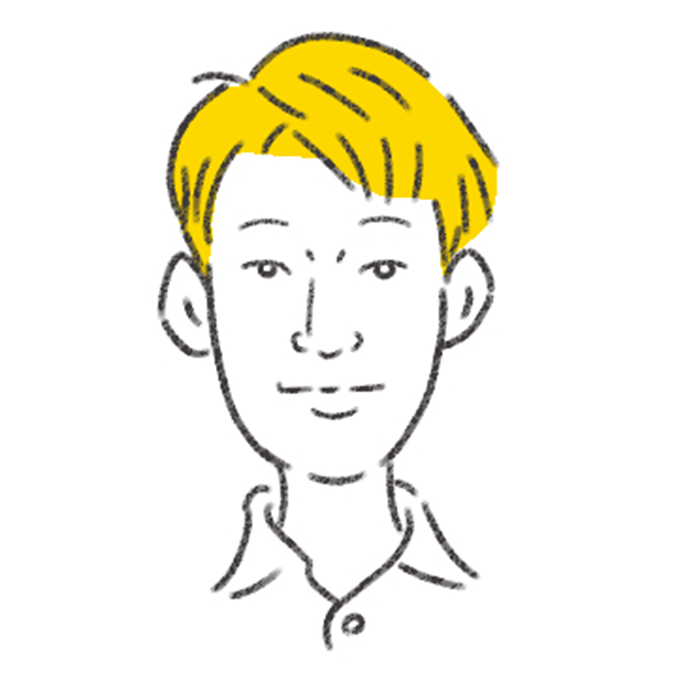 Ikumi Baba
Member of the Hit Habit Makers
Marketing Operations System Consulting Division
Hakuhodo Inc.
Ikumi Baba joined Hakuhodo in 2016. Since then, he has been engaged in data marketing work. He participates in the Hit Habit Makers to leverage the knowledge he has gained in the course of his work to create new habits.
His goal right now is to find the best locations for listening to the soundtracks of musicals.
SHARE
Back to News & Insights