Xì yuǎn: The desire to develop oneself by tapping the power of distant third parties

Hakuhodo Institute of Life and Living Shanghai (HILL Shanghai) unveiled its ninth set of findings on “The Dynamics of Chinese People” in December 2021. The study, which is a joint research project conducted by HILL Shanghai and the Communication University of China’s School of Advertising, uncovers the desires and new lifestyles of sei-katsu-sha—Hakuhodo’s term for the holistic person—and makes recommendations. The theme this year was “The Real Lives of the Post-00s, China’s Future.”

In this article, Ming Zhong, HILL Shanghai’s General Manager, summarizes the content of the presentation. 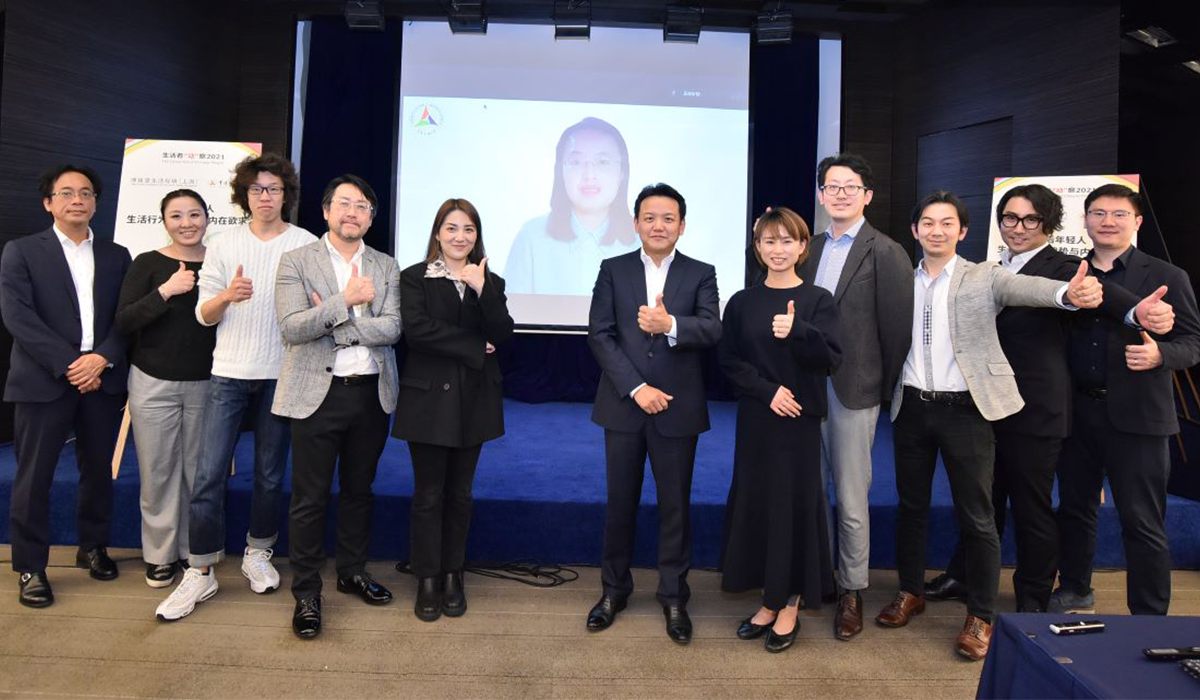 Why is research into China’s Post-00s generation (born in the 2000s) important?

The young Chinese of the Post-00s generation are said to be the most influenced by the evolution of digital technology and, as the generation that will lead the consumer market and trends in the future, they are becoming one of the most important marketing targets for companies. Given this, Hakuhodo Institute of Life and Living Shanghai narrowed in on the Post-00s, focusing on changes in their lifestyle behaviors and attitudes. The presentation spotlighted changes in the desires of China’s youth generation. 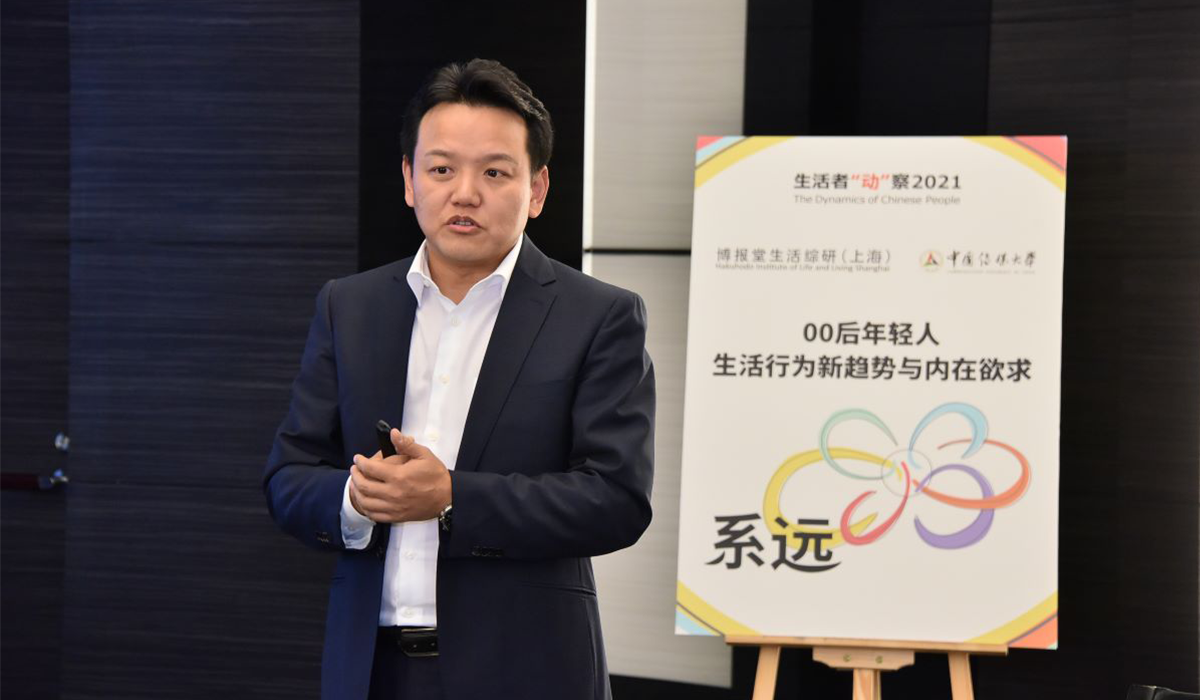 • An increasingly competitive society
Two years after the onset of the COVID-19 pandemic, there have been big changes for Chinese sei-katsu-sha of every age group, but change in the environment for the Post-00s generation, particularly those who graduated from university in June 2021, has been unprecedented. The number of students graduating in mainland China has been growing year by year, and last year that number reached 9.09 million. At the same time, the impacts of a slowing economy and the pandemic have seen companies scale back their recruitment plans, further squeezing the job market for college graduates.

• The number of young Chinese who see their standard of living as “High” shot up approx. 2.5 times in approximately 10 years
So what values and preferences do the Post-00s who find themselves in this harsh society have?

To uncover changes in the last decade, we compared findings from HILL Shanghai surveys targeting young people aged 18–21 conducted in 2012 and 2021. We asked respondents to rank their standard of living on a nine-point scale from Upper high to Lower low. While 11% said they were in “High” category (Upper high, Mid high, Lower high) in 2012, in 2021 this figure soared by nearly 250% to 27%. 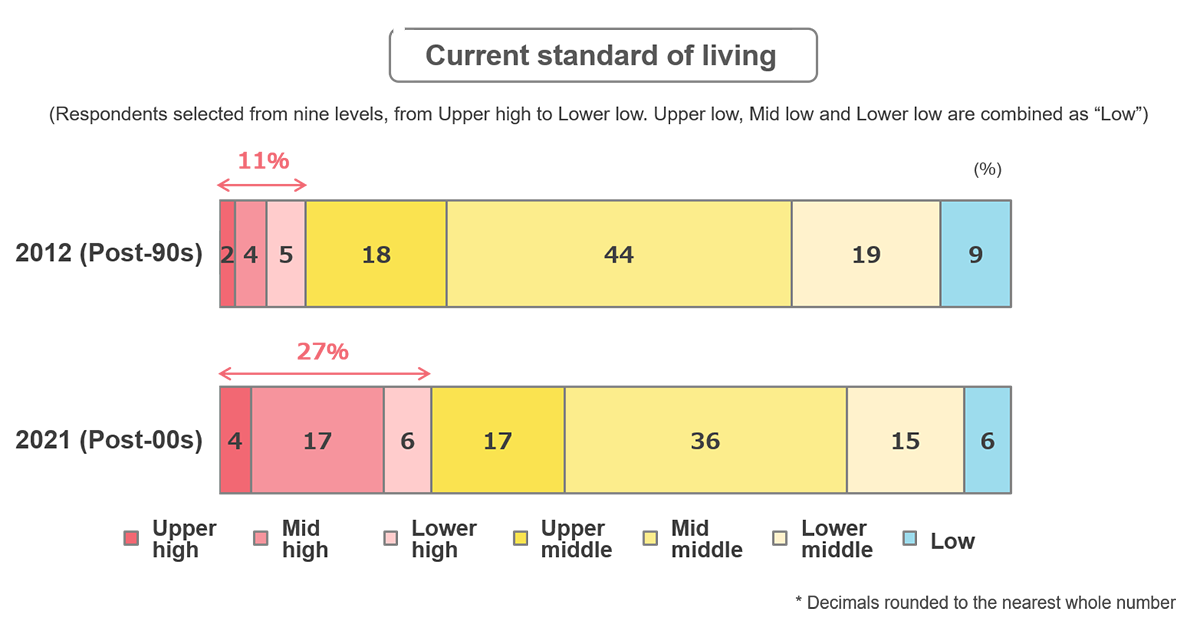 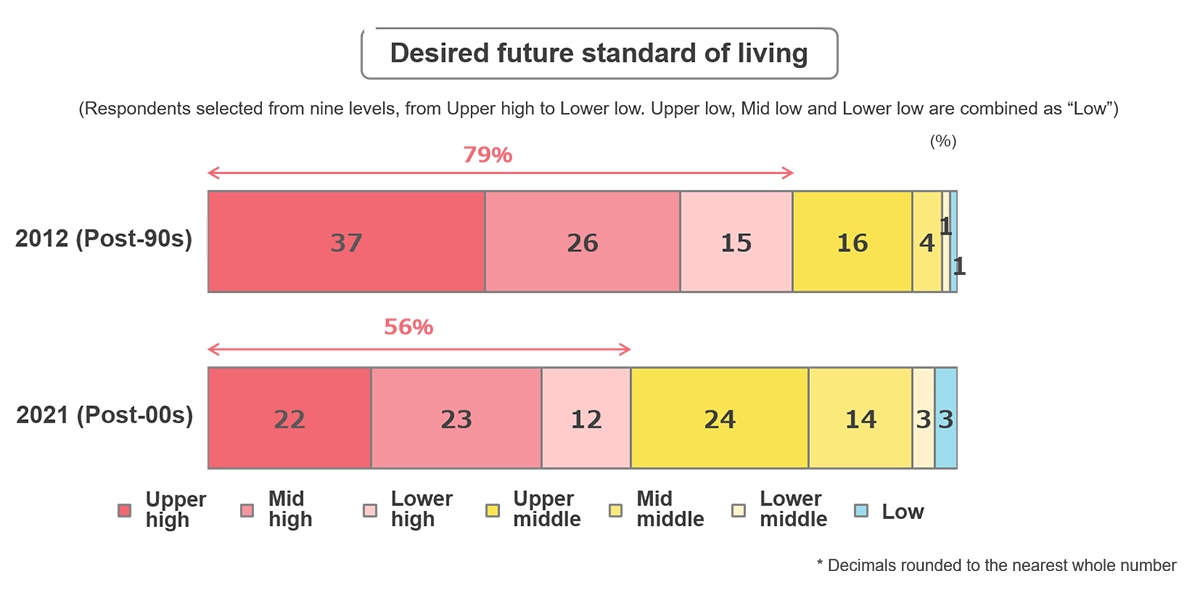 What we see in these findings is that the Post-00s are not excessively driven to reach the highest echelons and, while being aware of their privileged environment, have modest hopes for success and want the same happiness as everyone else.

Recently, the word tǎng píng (躺平; literally “lie flat”), meaning to seek a simpler life with lower professional and economic ambitions, has been popular among young people in China. But through this research, we have learned that young Chinese have not lost the desire to improve themselves, per se. This is evidenced by the fact that only around 20% of all young respondents agreed they would be happy to maintain the same standard of living as they have now or accept a lower standard of living than they have now. Put differently, it has to be said that some 80% of today’s young Chinese still want to improve themselves to succeed in this competitive society.

In that it allows them to avoid coming into conflict with their peers with the naked competitiveness that the generation before them did, tǎng píng can be said to be a secret to successful interpersonal relationships for today’s Post-00s.

Xì yuǎn: An essential desire of the Post-00s

HILL Shanghai’s research theme in 2012, the year of its establishment, was “Whirlpool Creation: Insights into New Behaviors of Young Urbanites,” which looked at the behaviors and desires of Chinese then in their 20s (the Post-90s). Young Chinese back then looked to put themselves out in the world, receive sympathy and to draw near to and become involved with people with similar values, thereby magnifying their own existence value. Since this could also be seen as a desire to grow by influencing and being influenced by others in a whirlpool, the research was titled “Whirlpool Creation.”

So how have Chinese people in their 20s changed in the decade since then?

Analyzing the attributes of Post-00s behavior from information gathering, self-development and communication behavior perspectives, we distilled their behaviors in these areas into the keywords Shū (梳; combing), Huàn (喚; summoning) and Tiào (调; adapting).

■ Shū: A focus on creating their own methods of acquiring reliable information
■ Huàn: Skillfully stoking their own motivation by expressing their own skills in a visible manner and tapping the power of third parties
■ Tiào: Cleverly compartmentalizing and adapting themselves to foster smooth interactions with various communities

From these three behaviors, it seems that Post-00s Chinese interact nimbly with their friends, family and other people in their close circle, while collecting information they need, getting support for their self-development and enjoying communicating by tapping the power of distant third parties. 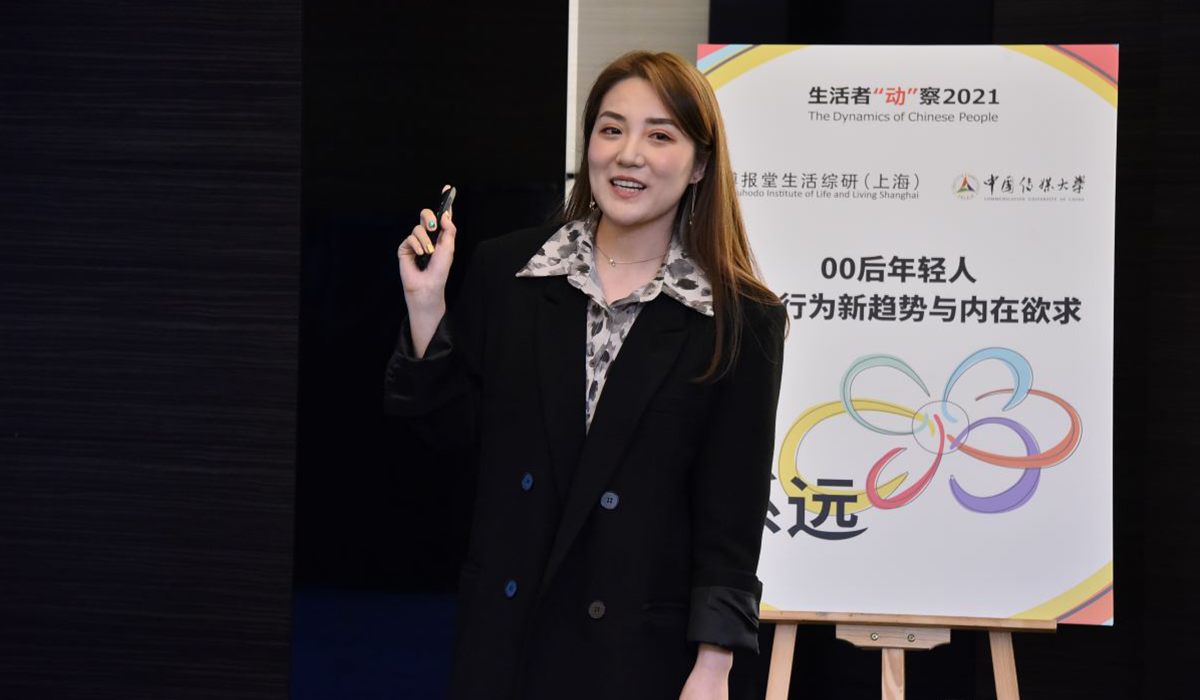 Feeling competition with others in their close circle growing fiercer by the day, Post-00s Chinese are tapping the power of distant third parties. While their close circle (acquaintances that they see from time to time) are companions they get on well with, they can also be potential rivals. Wishing to avoid becoming the targets of comparison or jealously for each other, they apparently have less desire to lean on their close circle, and don’t reveal their true feelings to them.

Conversely, the value of their “far circle” (distant third parties) is growing. Because these relationships are distant, it is easier to contact third parties in their far circle who appear to possess specialist information they are interested in, and to get impartial opinions from them, thanks to advances in social media. Relationships with people in their far circle, which release Post-00s from their real-world interpersonal relationships for a moment and allow them to interact without restraint, are extremely attractive to these young people.

In Chinese, Xì represents relationships and, as a verb, means “to connect.” Yuǎn means “far” or “distant.” Together, the two characters of Xì yuǎn express Post-00s Chinese people’s desire to connect with their far circle.

Post-00s Chinese people will exert an increasingly powerful influence on consumption and work styles in the years to come. This Xì yuǎn desire of the Post-00s generation will, we believe, also spread to other generations, impacting the consumer behavior and information gathering habits of sei-katsu-sha overall, which will ultimately compel companies to change their marketing activities.

The key to marketing to young people going forward will be the extent to which a company or brand understands the essence of the Xì yuǎn desire among young people, has its finger on their pulse, and becomes indispensable to them. 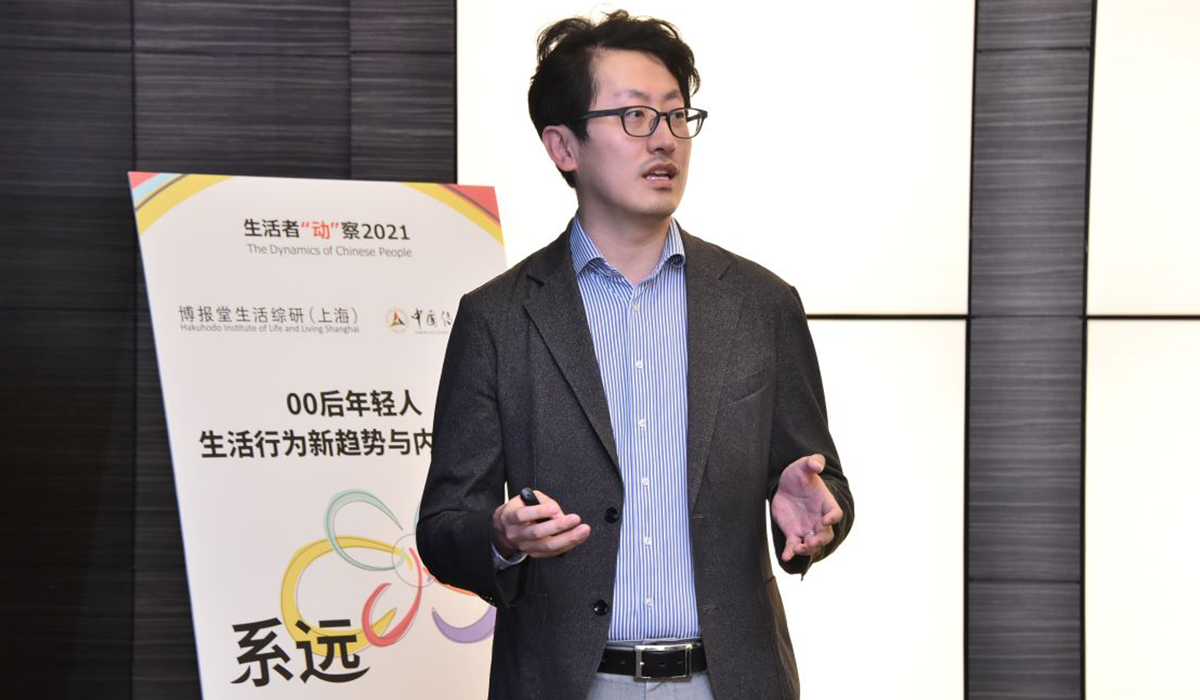 HILL Shanghai was established 2012 in Shanghai, China as the first institute outside of Japan of the Hakuhodo Group’s flagship think tank, Hakuhodo Institute of Life and Living. It marks the 10th anniversary of its founding in 2022. While actualizing the Group’s corporate philosophy, Sei-katsu-sha Insight, it also supports the marketing activities of companies in China, while developing local insights and making proposals on future new ways of living in China.

“The Dynamics of the Chinese People” is a joint presentation of research findings by Hakuhodo Institute of Life and Living Shanghai and the School of Advertising at the Communication University of China. 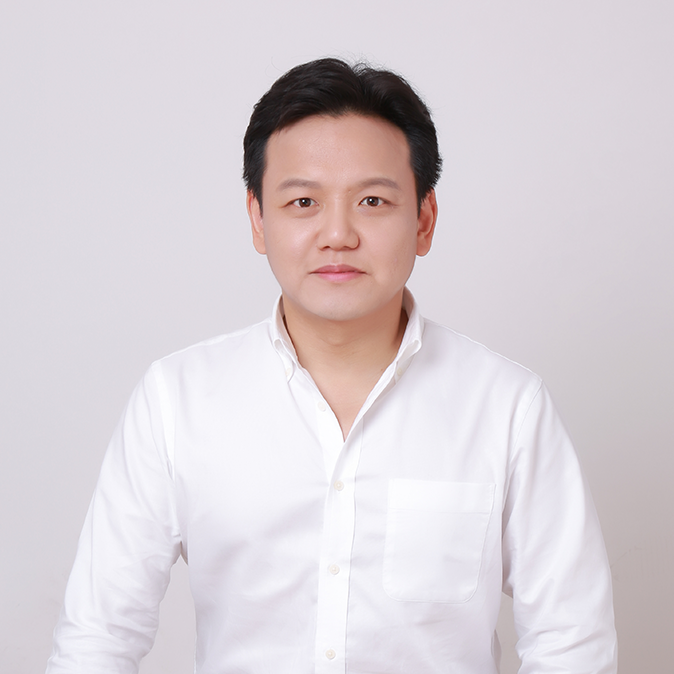 Ming Zhong
General Manager, Hakuhodo Institute of Life and Living Shanghai
Ming Zhong joined Hakuhodo C&D as a copywriter in 1998. After transferring to Hakuhodo in 2002, he engaged in planning for clients in a broad array of industries, including auto, cigarettes/alcohol, beverages and cosmetics, as a marketing planner. He has been based in Shanghai since April 2012, when Hakuhodo Institute of Life and Living Shanghai was established. He is active in a variety of research, lecturing, brand consulting and other activities.
SHARE
Back to News & Insights