Hakuhodo Marketing Executive: Have we lost sight of the goal of innovation? 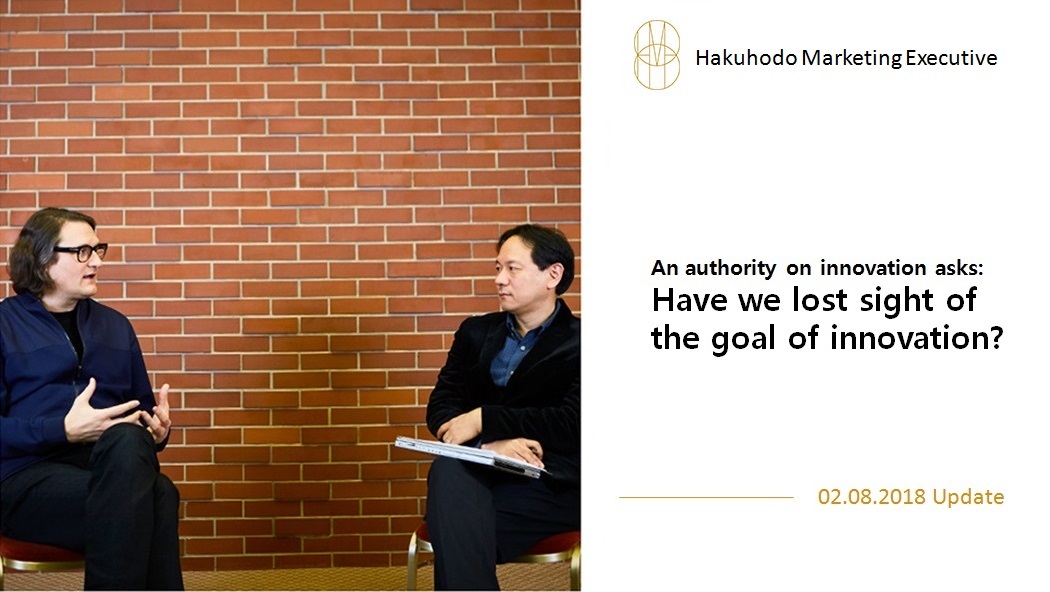 To many people, the mention of innovation brings thoughts of technological revolution and drastic change. But according to innovation authority Professor Robert Wolcott, innovation doesn’t necessarily require new technology. So what does innovation really mean? Are we Japanese being constrained by our own preconceptions? What do we need to learn to succeed as innovators—and what do we need to throw away?

Miyazawa: A lot of Japanese businesses are looking to innovate right now. That’s difficult to do successfully, but what do you think is the most important ingredient to success, Professor?

Wolcott: I can’t boil it down to just one thing, but the first thing to do is to clarify your objective. What are you trying to innovate to accomplish? You need to work out whether you are trying to improve efficiency or to grow your business.
These days, almost anything that looks new gets called an innovation. Actually, innovations that improve efficiency are different from those that lead to growth. But many businesses don’t differentiate, they use the same tools, the same approaches and the same teams for every kind of innovation.
That strategy can produce incremental improvements in efficiency for existing operations. Most established businesses are fairly good at incremental improvements in efficiency for existing operations. That’s something both Japanese and American businesses excel at, but radical improvements in efficiency require a different approach, different technologies, different processes, and sometimes new rules.
The same is true of innovations that lead to growth. If you want to innovate to build a new business, that takes a different approach from innovation to improve an existing operation.

Miyazawa: The bigger a business gets, the more we tend to focus on efficiency improvements. Even when we know how important it is to innovate for growth as well, it’s difficult to put that into practice. If it takes a different approach, does that mean innovation for growth requires much more determination to succeed?

Wolcott: Exactly. However, it’s important to recognize that innovation can be wasteful in the short term, and that it isn’t free. When we look at examples of successful innovation, many people misinterpret them as sudden successes, when they’re actually built on the backs of hundreds of failures.

Failure isn’t loss, it teaches us how to succeed

Miyazawa: Japanese companies aren’t especially tolerant of failure, and that can make it difficult to take drastic action or try differing approaches. How should we think about failure?

Wolcott: To accomplish innovation, we need to accept failure not as a loss but as the cost of learning. And it’s important to manage things to increase your chances of success, by applying logical processes. In concrete terms, the process goes like this: explore ideas, run low-cost experiments, test your ideas, apply them, then launch a pilot program.
In the beginning, you need a wide variety of ideas. Next take some of those ideas and clear up any uncertainties with low-cost experiments. Discard the ideas that don’t perform well or fail to function, and try different ideas instead. These aren’t failures, they’re tested hypotheses. That’s a wonderful thing. By repeating this trial-and-error over and over, you get closer and closer to success.

Miyazawa: You wouldn’t realistically expect to win a hundred-million yen lottery, a million-dollar lottery, with just one ticket. I think it’s incredibly important to experience many failures in the pursuit of successful innovation. Those failures, combined with the kind of management you’re talking about, will increase the chances of success, and make the company itself more innovative as well.

Diversify your portfolio of ideas

Wolcott: There is one more thing I’d like to add regarding failure, which is that among the ideas you gather in the first stage, you never know which will perform well and which will fail until you test them. You really can’t guess.
There are all sorts of reasons why new ideas fail, so most people hesitate to put them into practice. The trouble is, the more innovative an idea is, the more likely it is to change in ways you don’t expect. The more doomed an idea looks at the beginning, the more true this becomes. So if you’re afraid of failure, you’ll throw away every idea that could lead to a big hit, and discard anything that could revolutionize your business.
You have to try a lot of different types of innovation, because you don’t know what will work. It’s the same as investment. Financial advisers will tell you to spread your investments when planning for retirement, right? That’s because if you invest everything in Japanese stocks, or in real estate, you incur a lot of risk if that market crashes. You should manage your innovations like an investment portfolio, using diverse combinations to ameliorate the risk.

Miyazawa: The word “innovation” was first translated into Japanese as referring specifically to technological innovation, and since then has taken off most in the context of disruptive innovation, so there is still a tendency to think of it as huge, groundbreaking reform brought on by transformative new technology. I agree with you completely on the importance of smaller innovations, not just technological ones, but market-side innovations as well, to things like target demographics and sales approaches.

Throw away the idea that innovation has to be completely original

Wolcott: One more important step to successful innovation is to throw away the notion that your ideas need to be completely original, things that nobody has ever thought of before. Having an idea that nobody has ever thought of is more or less impossible. Someone somewhere has already had every idea imaginable, in one form or another. All we can do is apply, update, and combine ideas.
The essential mission of every business is to make a profit by selling things that customers want. A business doesn’t need to worry about how new its ideas are.

Miyazawa: I agree with you, Professor. Recalibrating old ideas into new combinations is the basis of innovation. Do you know of a good way to identify which ideas to recombine?

Wolcott: One way that I like to identify good component ideas is to observe other industries and identify traits of their successful businesses. For example, you could research how the military accomplishes its missions, or the way an artist solves problems, and apply that technique in a different field. Find out what the system is, and why it works, and then see if you can’t adapt it to your own company. Most of the time, introducing that foreign system unaltered will not go well. But if you can identify its essence, the core of what makes it work, then you can adapt it to your own situation.

Miyazawa: Japanese businesses usually do get news and information about their own industries, but I don’t think there are many that strategically collect interesting news about other industries. Just creating a way to periodically collect that information might be enough to make them more innovative.

Japan has everything it needs to compete globally—except self-confidence

Miyazawa: Many Japanese businesses are struggling to innovate, but in international surveys, it ranks as one of the most innovative countries in the world. It seems that the world has a very different impression of Japan than the Japanese themselves do. How do you think Japan compares in terms of ease of innovation, Professor?

Wolcott: Even now, I think Japan has opportunities for growth in multiple fields. For example, Japan still has a strong position in the field of robotics. It’s one of the top two or three leading countries in the world in robotics-related technology. The same is true of AI in some respects. Japan can still grow in these fields as well.
Additionally, Japan is on the front lines of the aging population trend, which produces a tremendous pressure and motivation to develop robotics and human-technology interaction, to the point that it can look a little bizarre from the outside. Japanese people have a unique way of looking at things. I like that about them. It’s extremely interesting.
Other than that, people in the consumer goods packaging industry come to Japan once a year just to see the wonderful packaging here. It’s like nowhere else in the world. Japan has a unique approach to electronics and online services as well.
Japan has the seeds of world leadership in fields like these. But in order to see them grow the country needs people to focus on those areas, with self-confidence, and vision, and drive.

Miyazawa: Japanese businesses are unique in a number of ways. In addition to things like lifetime employment and the simultaneous recruiting of new graduates, we have a notion of employment in terms of the company you work for rather than the work you do, so that you might transfer internally from accounting, to sales, to marketing, all within the same company. You don’t see that much elsewhere. These unique systems aren’t all negative, you can see some advantages in them in terms of producing innovation, but they don’t seem to be applied very effectively. You mentioned self-confidence a moment ago. Japanese people are good at correcting their weaknesses, but they don’t have a habit of affirming their own uniqueness. That might be because Japanese schools don’t teach self-confidence like American schools do.

Technology isn’t everything. Some innovations come out of marketing.

Miyazawa: Finally, I’d like to hear your thoughts on the role marketing has to play in innovation.

Wolcott: People tend to think of innovation as technology-led, but that’s not always true. Starbucks, for instance, managed to get Americans to pay four dollars for a cup of coffee. That was a very fine innovation, for them. But no new technology was involved. So innovation does not necessarily require new technology.
The role of engineers is to know what is possible. Is it possible technologically, and is it possible for us. But just because something is possible doesn’t mean it’s valuable.
Marketing, on the other hand, serves to find out what has value to consumers. Engineers know what’s possible, and marketers know what’s valuable. Put them together, and you can create the power to innovate successfully.

Miyazawa: Traditionally, marketing has usually presupposed a product or a technology, and been limited to figuring out how to present it to customers. But that approach restricts what you can do. If we can involve marketing as early as possible in the business process, as you suggest, to share with the engineers what customers want and how we can enrich their lives, then that should affect our chances of innovation.

Wolcott: That’s a great idea. A moment ago, I said the role of marketing is to know what’s valuable, but you could also say it’s to create a vision, and communicate a story that appeals to people before it’s realized technologically.

Miyazawa: Yes, I agree. I think in that sense we need to stop thinking of marketing and innovation as completely separate ideas, and unite the two in the future. I feel they’ve been converging recently.

Thank you for your insight.