The presentation, given by HILL Shanghai’s Chief Researcher Zhong Ming, was the third in an ongoing series, entitled “The Dynamics of Chinese People,” featuring research conducted jointly with the Communication University of China’s School of Advertising. The keyword “Un-Framing Consumption” was proposed to describe a new pattern of consumption emerging among Chinese sei-katsu-sha*1, and suggestions were offered on future approaches to marketing. Over 200 marketing professionals and senior management from Chinese and Japanese companies and representatives from various media attended the presentation.

The topic of this year’s research was “China’s New Consumption Landscape.” Chinese sei-katsu-sha remain voracious consumers despite concerns about the country’s economy. Meanwhile, in the wake of breakneck growth and the progress of globalization and digitalization, Chinese sei-katsu-sha’s values, and the lifestyles they aspire to, have become more varied, greatly altering consumption trends. Thus a new kind of sei-katsu-sha has appeared, one that enjoys consuming the dynamic stream of goods and services that appear without being bound by one-size-fits-all ideal images and fixed values.

HILL Shanghai coined the term Un-Framing Consumption to describe a pattern of behavior where sei-katsu-sha enjoy greater freedom by expanding their horizons and the bounds of their present lifestyle through what they consume.

Three consumption behaviors manifest in Un-Framing Consumption.
(1) Widening of the chief aim of the consumption process from ownership to also encompass experience and discovery: The value of a product/service is no longer the item itself; weight is also given to how the item is encountered and enjoyed after purchase.

*1 Sei-katsu-sha are more than simply consumers, just as people’s lives and lifestyles include more than just shopping. Hakuhodo introduced this term in the 1980s to emphasize its commitment to a comprehensive, 360-degree perspective on consumers’ lives. 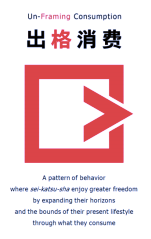 (2) Shift in the yardstick for consuming an item from whether it is a good fit to whether it is inspiring: In Un-Framing Consumption, where transcending one’s frontiers is desirable, the property of not being a good fit can become the value of being inspiring.

(3) Change in what sei-katsu-sha seek from consuming an item from a sense of achievement to a sense of growth: Shoppers want to feel that their horizons and lifestyles have changed and that they have grown by consuming the product/service.

Until now, marketing offering images and information built around ideal lifestyles that anyone could aspire to and feel a sense of accomplishment when they acquired it has been effective. But in light of the advent of Un-Framing Consumption and sei-katsu-sha’s desire to step out of the ordinary with new products, marketing that encourages sei-katsu-sha to act on these impulses by offering joy and growth in new product/service domains will come to the fore. It is highly likely that stimulating sei-katsu-sha’s desires using the Un-Framing Consumption viewpoint will boost their motivation to spend.

Hakuhodo Institute of Life and Living Shanghai will continue this project, observing Chinese sei-katsu-sha from unique viewpoints and making proposals from insights gained from these fresh perspectives.

Meaning of “出格,” (chuge in Chinese, shukkaku in Japanese), the Chinese characters translated here as Un-Framing. Chinese: In a class of one’s own; outstanding. Extraordinary; uncommon. Japanese: Beyond social norms. Exceptional. 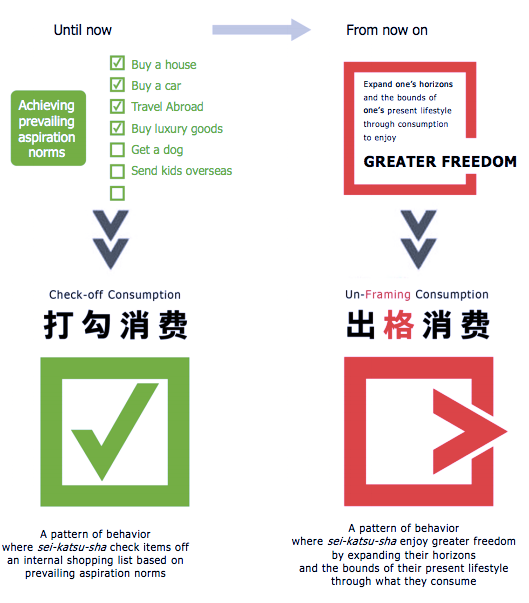 Given that 78% and 77% of Tier 1 and Tier 2 cities, respectively, feel that through their
consumption their horizons are being broadened and the bounds of their current lifestyles enlarged, it appears that most sei-katsu-sha practice Un-Framing Consumption. The percentage dips in the Tier 3 cities, but even there, it seems, 71% of sei-katsu-sha are enjoying Un-Framing Consumption. 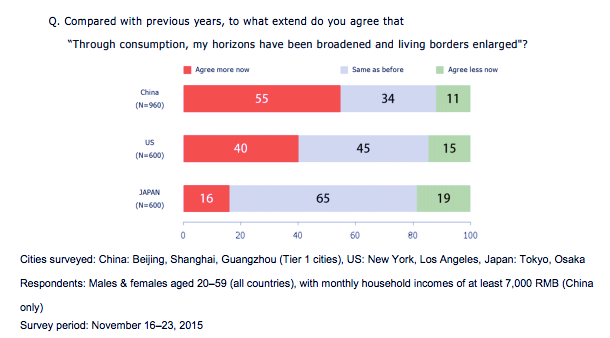 From a marketing perspective, Un-Framing Consumption encompasses 3 specific changes: a widening of in the chief aim of the consumption process from ownership to discovery/experience; a shift in the yardstick for purchasing from whether the item is a good fit to whether it is inspiring; and a change in what sei-katsu-sha seek from consuming an item from a sense of achievement to a sense of growth.

1. Chief aim of the consumption process: Ownership → Discovery/Experience
The emotional goal of the consumption process has widened from simply owning something to encompass discovery and experience before and after purchase it. This change can be viewed as a broadening of the value a product or service has to sei-katsu-sha from the item
itself to the connection it has with the individual.

2. Yardstick for purchase: Good fit → Inspiring
In conventional Check-off Consumption, the key factor was whether the item was a good fit. When this condition was met, a sense of satisfaction resulted. However, in Un-Framing Consumption, where expanding one’s horizons is desirable, the property of not being a good fit becomes a value from the inspiration it can offer. In a nutshell, inspiration trumps fit. Naturally, Chinese sei-katsu-sha are not simply seeking things that are not a good fit, but items that stimulate them to expand them. When viewed through this prism, new values that brands and products could convey should become apparent.

3. What sei-katsu-sha seek in the consumption process:
Sense of achievement  Sense of growth Sei-katsu-sha who enjoy Un-Framing Consumption are not beholden to any one view or style, but like to adopt many new styles. The changing and growing that results from the layering of these styles one on top of the other provides emotional satisfaction. This is a shift from achievement to growth. The prime object of owning a new product is how the individual will change or grow. The products and services themselves are not the main factor; sei-katsu-sha want to feel that their horizons and lifestyles have changed and that they have grown. The questions to ask when considering Un-Framing Consumption are how to create this feeling and how to make it discernible to sei-katsu-sha.

Reference 2
Hakuhodo Institute of Life and Living Shanghai
Hakuhodo Institute of Life and Living Shanghai, a wholly-owned subsidiary of Hakuhodo Inc. of Japan, is a think-tank established in Shanghai in 2012 to serve the Hakuhodo Group in China. Leveraging sei-katsu-sha research know-how amassed in Japan, the Institute supports companies’ marketing activities in China, while developing local insights and making proposals on future ways of living in China.

The fruits of these activities are provided to customers through the Hakuhodo Group’s offices. Some of the results are also made public via presentations of research finding, the Hakuhodo Institute of Life and Living Shanghai’s website, publications and other means.

The Dynamics of Chinese People is a joint research project conducted by HILL Shanghai and the Communication University of China’s School of Advertising that uncovers new sei-katsu-sha behaviors and desires and reports research findings. The Un-Framing Consumption findings are the project’s third set of findings, following its Whirlpool Creation findings in 2013 and Information Bees findings in 2014.