The insights were shared at this year’s ASEAN Sei-katsu-sha Forum 2015, which was held in Bangkok on November 12 for over 300 executives and marketing staff from local and Japanese companies operating in the ASEAN region, as well as representatives from the Thai media. Since the 1980s, sei-katsu-sha *1 insight has been the centerpiece of Hakuhodo’s philosophy. Sei-katsu-sha, which literally means “living person,” expresses the holistic person—an individual with a lifestyle, aspirations and dreams. By not treating people simply as “consumers,” Hakuhodo is able to gain deeper insight into them, enhancing the branding and marketing we undertake for our clients.

The flow of people, goods, and money in the Southeast Asian countries has heightened interest in ASEAN as a market. As household incomes in ASEAN countries rise thanks to economic growth, the middle class has become proportionately larger, and is expected to become the majority in the consumer market.

*1 Sei-katsu-sha are more than simply consumers, just as people’s lives and lifestyles include more than just shopping. Hakuhodo introduced this term in the 1980s to emphasize its commitment to a comprehensive, 360-degree perspective on consumers’ lives.

The middle class is generally defined by income. But, the latest research found large
segments of people who identify themselves as middle class regardless of their actual
income, indicating that a redefinition of “middle class” may be required.

The report suggests the emergence of The Seamless Middle, a group that cleverly finds ways to live their desired lifestyle by seamlessly juggling income and spending, unbound by their current income level. They do so by (1) increasing their sources of income with side jobs, whilst still maintaining a full time job: for example, by buying a waffle maker and selling waffles to neighbors from home; (2) controlling their expenses: for instance by stocking up on canned coffee when it’s on sale; and (3) turning expenses into future income: for example, by investing in the next generation by sending their kids to international school so that they can work abroad in the future.

The report notes that this trend is a shift away from living the life they can afford to finding ways to afford the life they want.

Research across all ASEAN countries revealed a common picture of this Seamless Middle, suggesting the emergence of a society where most people share a seamless perception of themselves as middle class, regardless of their income bracket.

Unlike the traditional middle class who spend prudently, spending for The Seamless Middle is considered an upfront investment where the benefit (value) from it is not as important as the return it will bring about in achieving the desired lifestyle.

This means that next-generation marketing and communication strategies targeting The Seamless Middle will need to focus on designing and maximizing ROI through three key points; namely defining target by income class and self-perceived class, repositioning spending as an investment and not as a cost, and lastly using sei-katsu-sha as corporate ambassadors for attaining desired lifestyles.

The latest research findings are based on HILL ASEAN’s ASEAN Quantitative Survey on attitudes toward “class” (see Note 1) and ASEAN Home-Visit Survey on income, expenditures and lifestyle (see Note 2), which seek to identify commonalities and differences among ASEAN sei-katsu-sha, to gain an overall insight into the region as it further integrates into the ASEAN Economic Community (AEC). The studies cover the five ASEAN cities Singapore, Kuala Lumpur, Bangkok, Jakarta and Ho Chi Minh City.

HILL ASEAN will continue its research, observing sei-katsu-sha from its unique viewpoints and making recommendations based on insights gained from these fresh perspectives.

About Hakuhodo Institute of Life and Living ASEAN

Established in 2014, Hakuhodo Institute of Life and Living ASEAN is the Hakuhodo Group’s new sei-katsu-sha think tank in the ASEAN region. Leveraging sei-katsu-sha research know-how accumulated in the thirty-odd years since launching the Hakuhodo Institute of Life and Living in Japan in 1981, the Institute supports companies’ marketing activities in the ASEAN region, while developing local insights and making proposals on future ways of living in the region.

Reference:
Rise of the ASEAN middle class
As household incomes in ASEAN countries rise thanks to economic growth, the middle class has become proportionately larger, and is expected to become the majority in the consumer market. 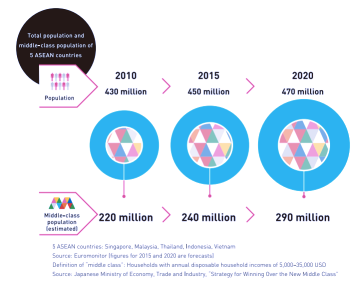 General criteria for defining “middle class”: Define by income Most ASEAN countries define the middle class as a socio-economic class (SEC) by monthly household income, regarding Classes B and C as the middle class. However, we know from looking around us that people who have higher incomes also choose to lead a middle-class lifestyle. 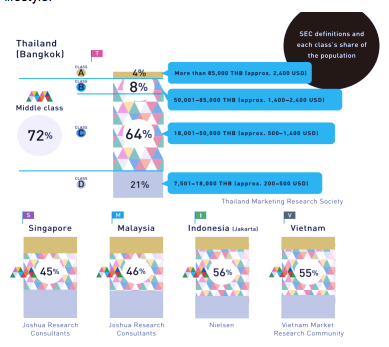 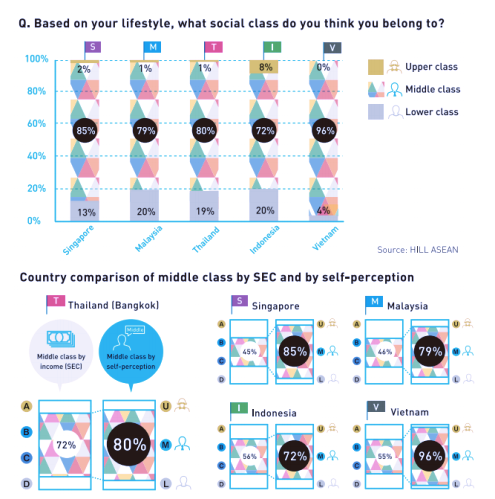 1. Increase income
The study found that 21 out of 27 households had a secondary source of income. These secondary sources of income can be divided broadly into four categories: working from home, selling to neighbors (doing what they love on the side), trading on social media (boosting income on the internet) and entrepreneurship (side jobs that become businesses).

2. Reduce expenses
Smart consumption is one way in saving money by shopping wisely. A trend found across all segments showed that people controlled expenses and paid less by buying items on sale and shopping online. Another way of controlling monthly costs is buying on credit, particularly for the SEC C and D segments. Buying on credit allows them to purchase wants and needs in smaller installments.

3. Turn spending into future incomes
Investing in the next generation by spending on a child’s education for example, is a trend that is applicable across all segments. The study also found that spending on interests and turning them into businesses is another way to create future incomes. An interesting trend to note is that the SEC D segment typically invests in small goods, while the SEC A segment invests in real estate.

Conceptualizing a new perspective on the ASEAN middle class
The ASEAN middle class, also now known as The Seamless Middle, has a mind that cleverly finds ways to live their desired lifestyle by seamlessly juggling income and spending, unbound by their current income level. It is a society where most people share a seamless perception of themselves as middle class, regardless of income bracket. This self-perceived middle class is so broad because it is not only about how much someone earns, but also by the degree to which they can attain their desired lifestyle.