President Mizushima on succeeding at business in a completely digitalized world

With the digitalization of all kinds of objects as a result of advances in technologies such as 5G and IoT device, an era in which sei-katsu-sha and companies are in constant contact is almost upon us. What does the Sei-katsu-sha Interface Market mean? And what is important for doing business in this market? Hakuhodo President & CEO Masayuki Mizushima described the company’s latest undertakings at the recent HAKUHODO Executive Forum 2019. This article reports on the content of his presentation. 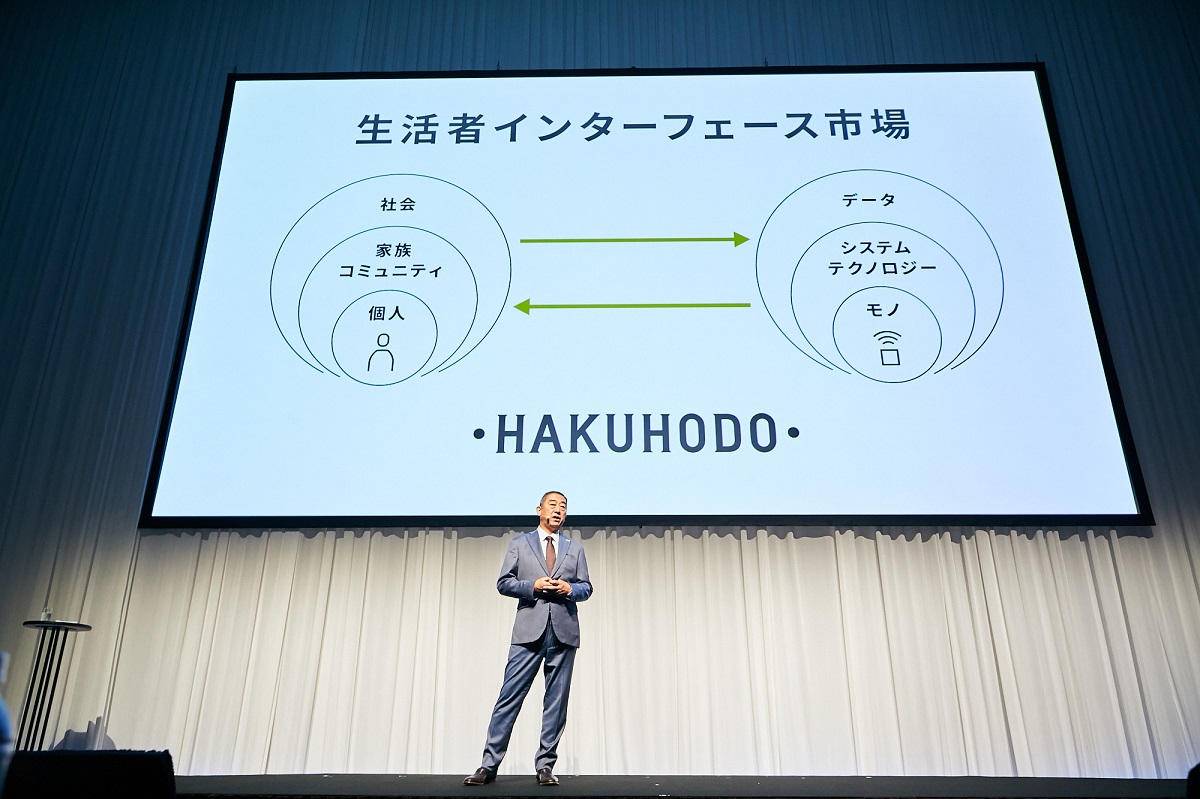 This year has been called Year 1 of 5G. Already commercialized in the US and Korea, preparations are well underway for its introduction here in Japan, too. As typified by 5G, digital transformations have begun in various areas of our lives. The transformation of our lives as a result of these advances in technology has begun.

For instance, take the things you wear on your person. Smartphones are already de rigueur, but the number of people who wear such wearable devices as smart watches, smart wristbands and shoes with sensors built into them is increasing, and there is talk that augmented reality glasses will be released next year. Thus, we are in an age where the things that people wear are increasingly connected to the Internet, and people’s movements and condition are recorded as data.

Inside the home has also become digitalized and connected to the Internet. More and more people are using AI speakers, smart remote controls, robotic vacuum cleaners and such. Things such as refrigerators, light fixtures and water boilers are being made smart and connected to the IoT, and new air-conditioner products that can be controlled remotely via smartphone are already commonplace.

What about our towns and cities? The conceptualization of smart cities, which will utilize IoT devices, sensors and AI to optimize transportation networks and energy and solve various social issues, has begun. Smart stores that use cameras and automated checkouts—in other words, unmanned stores—have also been launched by 24-hour convenience stores and the like. If cities in their entirety were to become networked and self-driving cars connected to traffic lights, a world without traffic congestion may become reality in the future.

So, advances in 5G and other technologies will usher in a completely digitalized future, where all manner of objects around sei-katsu-sha are digitalized and networked. Objects will also be connected to each other. If we think of what has been happening until now with computers and smartphones as the “digitalization of information,” what is yet to come will be the “digitalization of lives.” We live our lives surrounded by things, and their evolution into digitalized and networked forms will change the relationship between sei-katsu-sha and objects.

When objects connect with networks, direct transactions with sei-katsu-sha begin. For instance, cameras and sensors might collect data on our movements and facial expressions, which could be analyzed using AI, enabling the provision of more convenient and appropriate services. “Transactions” between objects and sei-katsu-sha will give rise to new sei-katsu-sha value. Moreover, imagine that a particular sei-katsu-sha has a problem, there will be an object that provides services that address that problem. When the sei-katsu-sha uses the service, their needs will be visible in the data. Having grasped these needs, the object evolves further, providing optimized services to the sei-katsu-sha. The repetition of these “transactions” will solve all sorts of sei-katsu-sha challenges for which previously there have been no solutions.

Now let’s look at the challenges to optimizing learning in particular. The introduction of electronic textbooks is set to begin when the new national curriculum guidelines come into effect next year. The digitalization of paper textbooks will enable such things as the ability to confirm shapes in three dimensions, music playing from musical scores, and the ability to immediately confirm the pronunciation of English words. Experiential learning and home-schooling will also be enhanced. Moreover, since learning data will be networked, its collection and analysis will allow provision of learning methods optimized for each student. The idea is to boost the effectiveness of learning in this way.

The digitalization and networking of textbooks means new business opportunities will abound for education-related companies. From the current “sell it and forget it” business model, business that aims to build lasting ties with sei-katsu-sha, akin to a subscription model, will become possible. Advances in objects will dramatically change how business works and how companies are managed.

In addition, the digitalization and networking of objects will not only affect individual companies, but industry as a whole. Take mobility as a service (MaaS), for instance. The optimization of services to meet sei-katsu-sha’s mobility needs is not possible if confined to within the auto, railway and aviation industries. Optimized mobility services that integrate all of these are needed.

And what about healthcare? Health device manufacturers, beverage makers, toiletries companies and such may come to collaborate to address the challenges of health management and improvement, thereby providing significant health value in an age of 100-year lifespans. Various groups could materialize, bringing new services one after another. Industries, too, could become optimized around sei-katsu-sha.

As the boundaries between industries disappear, the possibility of immense sei-katsu-sha value appearing will grow. Companies in the years to come will be required to manifest imagination and creativity beyond such industry boundaries. Creativity itself will create the markets of the future. This is my belief.

In this way, as various objects around us become digitalized and connected to the Internet as a result of advances in the IoT, 5G and the like, the digitalization of life is progressing. The evolution of things will markedly change the touchpoints between sei-katsu-sha and objects. The relationship between objects and sei-katsu-sha is evolving now that objects have begun carrying out transactions. No longer are they simply touchpoints; but interfaces. Various interfaces will materialize around sei-katsu-sha, making possible various services using them. This will bring new value and create new lifestyles for sei-katsu-sha.

Ingeniously designed interfaces will be accepted by sei-katsu-sha, create value and, as fee-paying services, make huge profits for companies. Creating interfaces with sei-katsu-sha will become essential work for companies. Objects will also become connected to each other, which will realize new interfaces that go beyond the bounds of industries, possibly redrawing the industrial map. 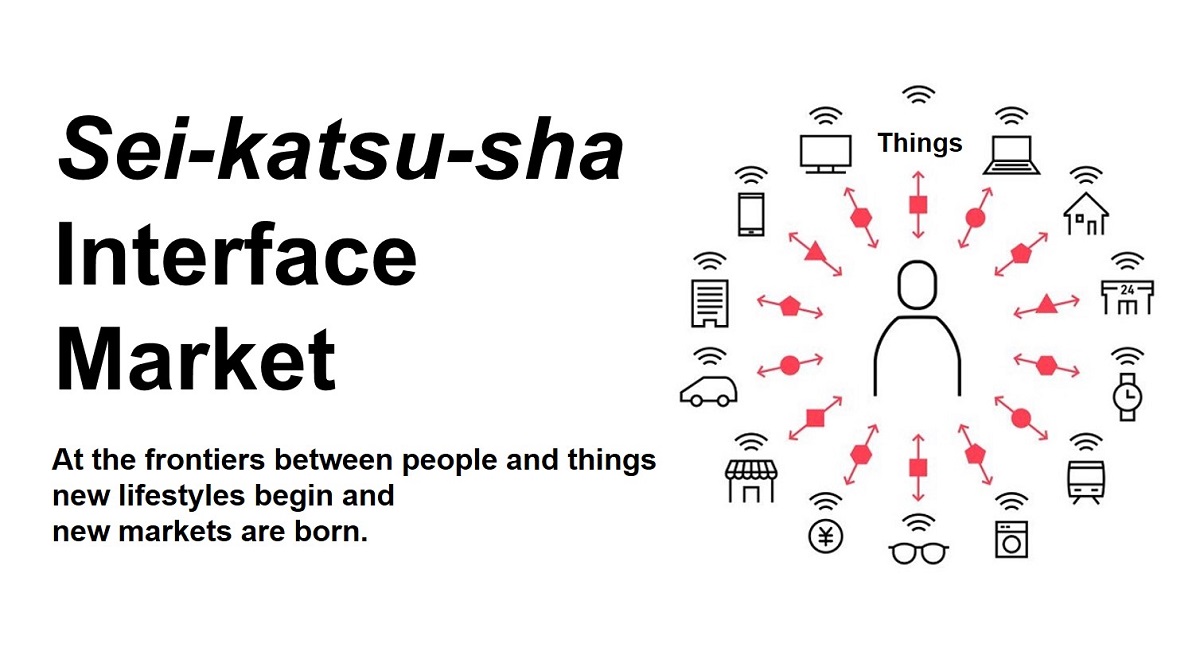 Technological innovation shows no sign of slowing, and objects are becoming digitalized and networked, but are they also connecting with sei-katsu-sha? Are they exciting new desires and aspirations in sei-katsu-sha? Just connecting things to networks is not enough to bring forth a huge market. Sei-katsu-sha value and markets will only materialize from connecting with sei-katsu-sha. But in actuality, we often hear things like: “We have decided a framework for a digital service in our storefront, but users don’t seem to be taking action. What is missing?” and “We’ve heard about what 5G can do, but we don’t know what we should be doing for our customers, or how to think about it.”

When systems and technology are woven into objects, collecting and analyzing data becomes possible, but comments like those I just mentioned indicate that the evolution of things may be steaming ahead while sei-katsu-sha remain an afterthought. Are the mechanisms of things alone becoming more sophisticated while leaving sei-katsu-sha behind?

The word interface has the meaning “connect two different things in the most ideal way.” For each to connect tightly with the other, it is necessary to know the mechanisms of both well. There are “mechanisms” in sei-katsu-sha for creating aspirations and actions, too. Such things as a sei-katsu-sha’s personal attributes, work, interests and way of life; the composition of their family and the communities to which they belong; and their social and economic environments all give rise to their emotions, desires and behavior. It is only with a deep understanding these sei-katsu-sha “mechanisms” that we are able to design sei-katsu-sha interfaces. 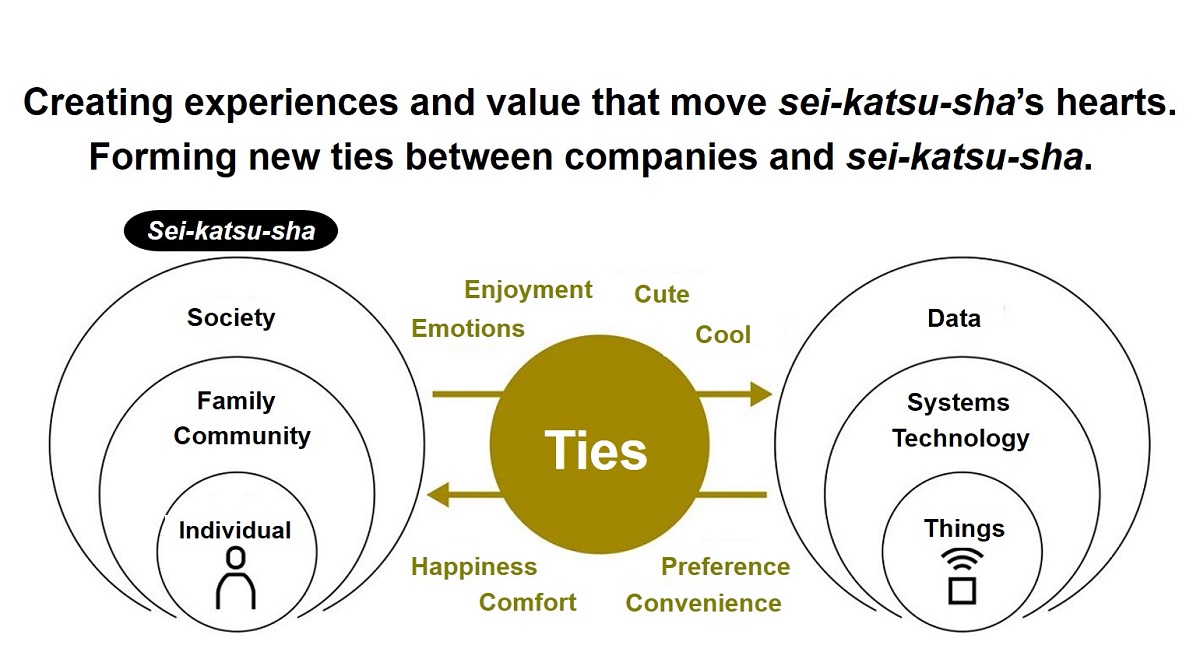 Let’s consider the digitalization and networking of education again. I mentioned the efficiencies that will arise when textbooks become digitalized and networked, which will make it possible to provide learning methods tailored to a child’s abilities. But if electronic textbooks were to be designed as a sei-katsu-sha interface, besides simple efficiency, it could also be possible to bring forth a child’s latent interest and potential.

I heard a story about an elementary student who was into robots and, researching various things about robots, discovered that they operate according to mathematical formulas. He then furiously studied math, which had not previously been their strong suit. People are motivated if they are interested in something. I think that goes even more for children. The important thing is to provide the first trigger that gets them interested. This is where the sei-katsu-sha interface comes in.

Electronic textbooks designed as sei-katsu-sha interfaces could see that a child is interested in a particular area and suggest that they might like to study it more. And it could make lots of these suggestions to lots of children. It may become possible to provide educational experiences that excite and open the eyes of every child.

And what about mobility, a network of transportation? The general idea of smart mobility is that when cars and public transport are connected to the network, we’ll be able to get to our destinations via the optimal route. But this poses some questions: Once they give up their drivers’ licenses, elderly people become housebound. This causes their health to deteriorate. Can MaaS solve problems like this? Perhaps we should be thinking more about services that make older people want to leave their homes? If we designed mobility as a sei-katsu-sha interface, services that provide older people with the fun and joy of going out would be sure to follow.

Actions that Hakuhodo is taking to address three challenges

Firstly, we are working to heighten our foresight into the coming future. We will need to be able to predict the future of technology, of course. But aside from that, we will develop a new consulting method that backcasts from sei-katsu-sha’s desired future.

Next, we will work to advance understanding of sei-katsu-sha. The vast stores of sei-katsu-sha data Hakuhodo possesses are evolving in many ways. In addition, we have established a new company, Data EX Platform Inc., which provides solutions that safely and securely combine a company’s customer data with third-party data, using patented Hakuhodo technology.

We also place importance on service building abilities. We have formed specialist UI/UX and system building division in which various members, including consultants, designers and system engineers collaborate to deliver highly mobile, one-stop services from strategy to system building.

We have also started in-house development of related technologies. We are actively developing next-generation technologies that will be central to sei-katsu-sha interfaces, such as the AR cloud, which will become exceedingly important in the future, and essential AI technologies.

The passion woven into our new visual identity 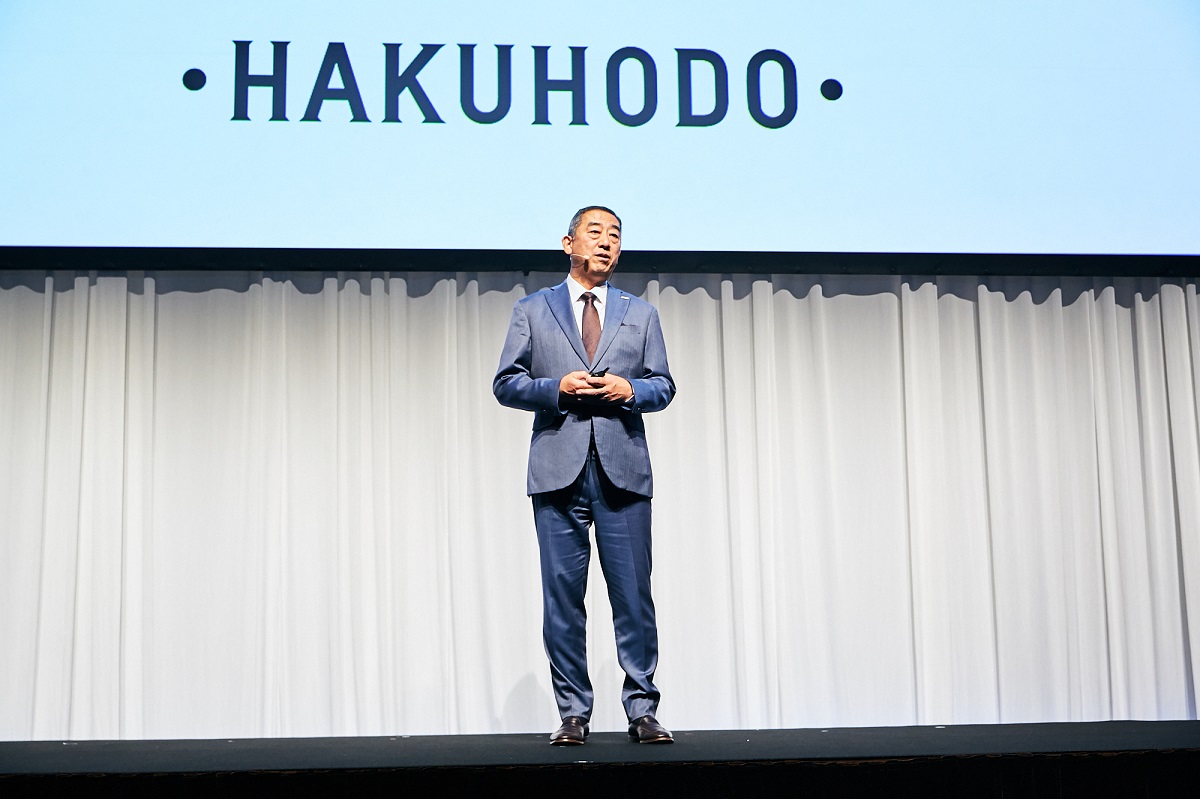 Hakuhodo introduced a new visual identity (VI) in July 2019. The symbol of the VI is The Central Dot. These dots have two meanings. Firstly, they are a starting point. Our employees will be starting points at the center of the vortices that give rise to new society and lifestyles, developing ideas, taking action, and spurring others into action. Secondly, they are points of interconnection. We will become a hub that brings together society’s key members, pressing social issues, themes for the future, companies and people and startups to implement new mechanisms in society. We made The Central Dot the symbol of the VI based on these two sentiments.