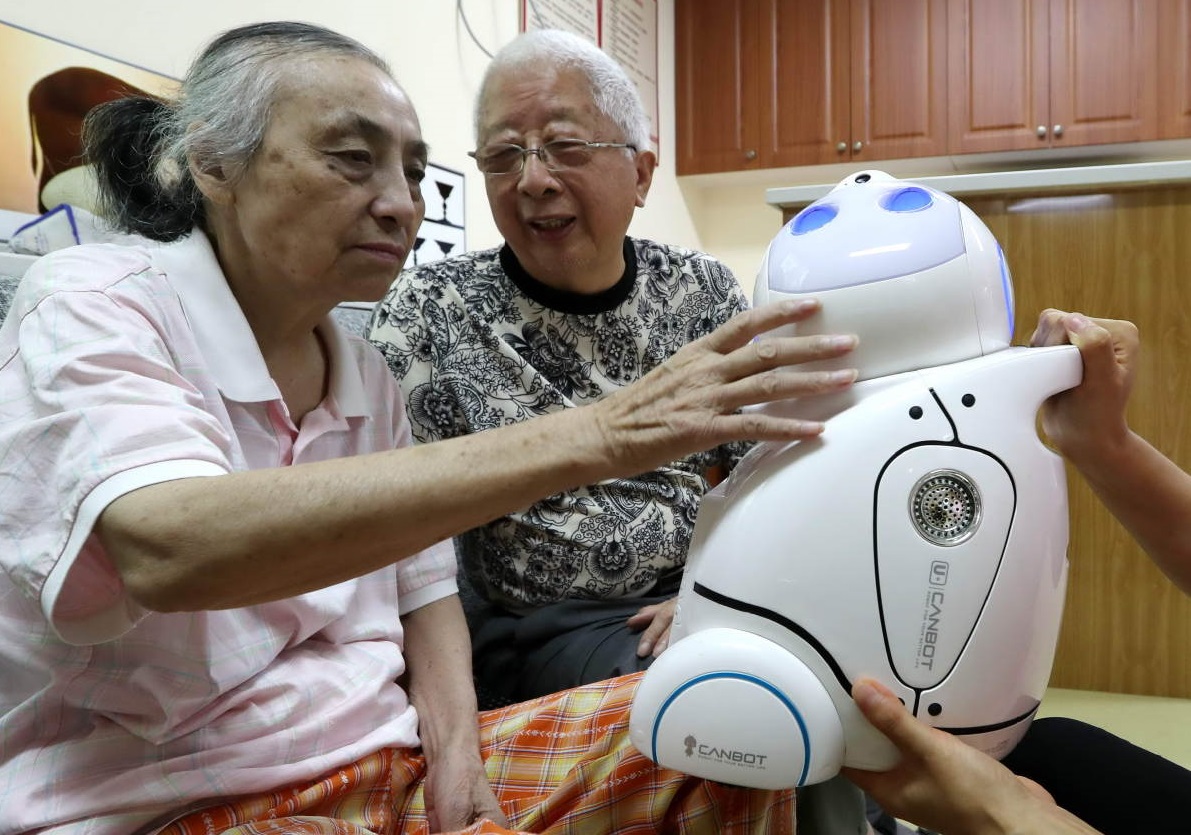 Senior citizens interact with a robot at a nursing home in Hangzhou, Zhejiang province. [Photo by Lin Yunlong/For China Daily]

Chinese consumers appear to be younger at heart than their counterparts in the United States and Japan and this is reflected by their consumption habits, despite an increasingly aging society, a new report showed.

Chinese people use technological products and services more frequently than their peers in the United States and Japan, and most of them tend to use mobile phone apps and social media platforms to learn about things they are interested in, according to a report released by the Hakuhodo Institute of Life and Living Shanghai, a sub-affiliate of Tokyo-based advertising firm Hakuhodo, and Communication University of China.

The report, published last week in Beijing, surveyed a total of 5,000 people aged between 20 and 59 who use smart phones in their daily life. They live in the first-tier to fourth-tier cities in China, Kanto, Kansai and coastal areas of Japan, and New York, Los Angeles and Chicago in the United States. The research has been conducted for seven consecutive years.

“The senior Chinese residents actively accept the positive opinions brought by the younger generations, under the background of a more stable period of economic growth in China in recent years,” said Zhong Ming, lead researcher of Hakuhodo Institute of Life and Living Shanghai.

“We found that the average psychological age of Chinese respondents is 31.9, while it’s 32.9 in Japan and 37.1 in the US. Compared with two to three years ago, the older generations are more easily influenced by young people and their mentality is younger,” he said.

Among the respondents, 35 percent of Chinese said they particularly care about the brands and services of technological equipment such as mobile phones and computers. The figure was higher than 9 percent recorded by Japanese and Americans.

In addition, 16 percent of Chinese said they pay particular attention to brands of clothing, shoes and bags. The figure was higher than 14 percent in the US, but lower than 18 percent in Japan.

“In China, we can see a lot of older couples retake wedding photographs to celebrate their anniversaries, and middle-aged moms are willing to learn about the latest fashion and makeup tips. Besides, some elderly people like playing computer games and use buzzwords. The older generations are actively accommodating and catering to young people’s views,” Zhong said.

A 57-year-old advertising firm employee who lives in Shanghai said 10 years ago, he bought his first mountain bike, and has stuck with the hobby. He said he had attended various kinds of biking events nationwide, and it felt fantastic to exercise and go forward together with young people.

Another finance employee surnamed Zhang, 41, said his psychological age was only 28 and he was fond of cutting-edge high-tech products and outdoor sports such as scuba diving.

“More older people are using popular mobile phone apps that are favored by the young in China. They are not satisfied with a fixed living range, and they are willing to try out different new things,” said Yang Xuerui, professor of advertising at the Communication University of China.

China is also considered a leader in the on-demand economy, with people in the country reporting higher usage figures for food-ordering apps, car-hailing apps and mobile payments than Japanese and Americans.

When it comes to the willingness to spend money to purchase goods and services next year, Chinese scored 76 out of 100, while Japanese scored 61 and Americans scored 61.9, the report found.