The Hakuhodo DY Group has been taking steps to expand its business, as an ad agency, in the sports domain such as promoting an athlete casting business. As part of this expansion effort, we signed a contract for the 2016 sport climbing season with the Japan Mountaineering Association to support sport climbing competitions. For this article, we asked Akiyo Noguchi, who has won numerous competitions around the world and continues to be a leading figure, as a world champion, in the Japanese climbing world, to tell us about sport climbing becoming an official sport at the 2020 Tokyo Olympics, the appeal of sport climbing, which is certain to benefit from increased exposure, and her thoughts on participating in the Olympics.

The attraction of sport climbing — it allows more freedom than other sports and lets athletes show off their individuality.

Sport climbing has three main disciplines: bouldering, lead, and speed. In bouldering, competitors climb walls around five meters high without any ropes. In lead climbing, competitors climb 10-meter or higher walls with protection ensured with a rope. And in speed competitions, climbers compete to see who can climb a 10-meter or 15-meter wall the fastest along a known pre-planned bolted route. In all three disciplines, the only divisions at competitions are for men and women; there are no age or weight divisions. This is a bit unusual compared to other sports. Occasionally, you will have athletes ranging in age from 16* to 30, or ranging in height from 160 cm to 180 cm, competing using the same problem. This means the athletes have many different physiques, from the very muscular to the petite and slender. Sport climbing has a great deal of freedom that lets athletes show off their individuality and talent in how they tackle each problem.
*The minimum age limit at the World Cup and other international competitions is 16.

There is no one ideal physical build for climbing, but Japanese people tend to be well suited for sport climbing. Japan is one of the world’s powers in climbing, with many Japanese athletes appearing on the leaderboards at international competitions. The inherent strengths of Japanese climbers are their ability to move their body nimbly and to devise various climbing schemes, such as clearing difficult positions with flexibility and incremental center-of-gravity movements. 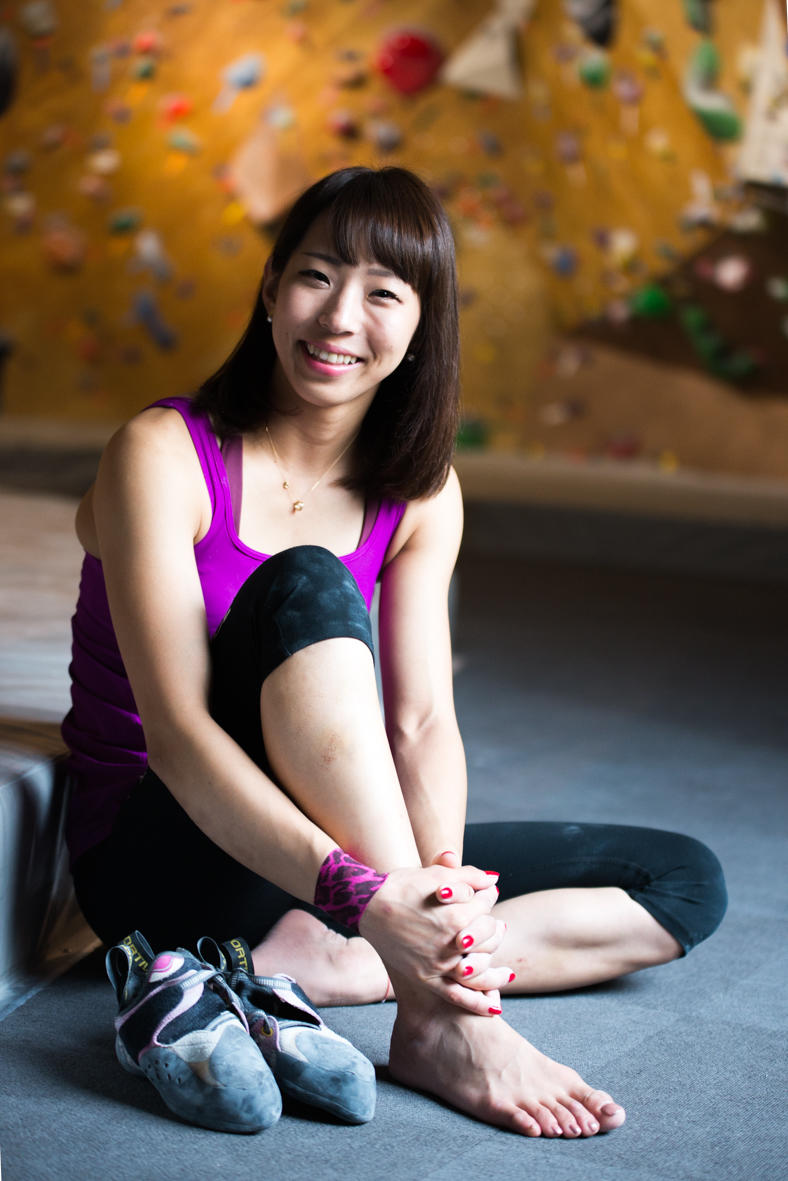 As a girl who loved climbing trees, Akiyo Noguchi aimed to be a pro free climber.

To tell the truth, I’m not very good at sports in general. I’m terrible at running, swimming, and any kind of ball sports — I’m really hopeless (laughs). The only thing I’ve always loved is climbing. My parents run a cattle farm in Ibaraki, and as a girl, I was always climbing trees or climbing and playing on the roof of the cattle barn. My first experience with sport climbing was on a trip to Guam when I was in my fifth year at elementary school. I went with my family to a game arcade where they had a climbing wall set up. I had so much fun the very first time I tried it. As it happened, a climbing gym had just opened that year in my hometown, so when I got back to Japan, I immediately became a regular at the gym.

I won the All-Japan Youth championship in my final year of elementary school, but at the time it just felt like an extension of horsing around at tree climbing. I was completely caught up in the pure joy of climbing.

As I started middle school, my father got some of his friends to help and remodel our cattle barn and create a climbing wall for me. That meant I could practice as much as I wanted even at home. I decided to go professional when I won my first championship at the 2008 World Cup. I’ve accumulated lots of experience at many different competitions since then, but my goal is always to at least climb well and have fun.

What’s never changed, now or in the past, is the thrill and sense of accomplishment of being able to climb something I couldn’t climb before or being able to make a move I couldn’t do before. I’ve always loved high places (laughs), so even at heights over 10 meters, I never really feel scared. 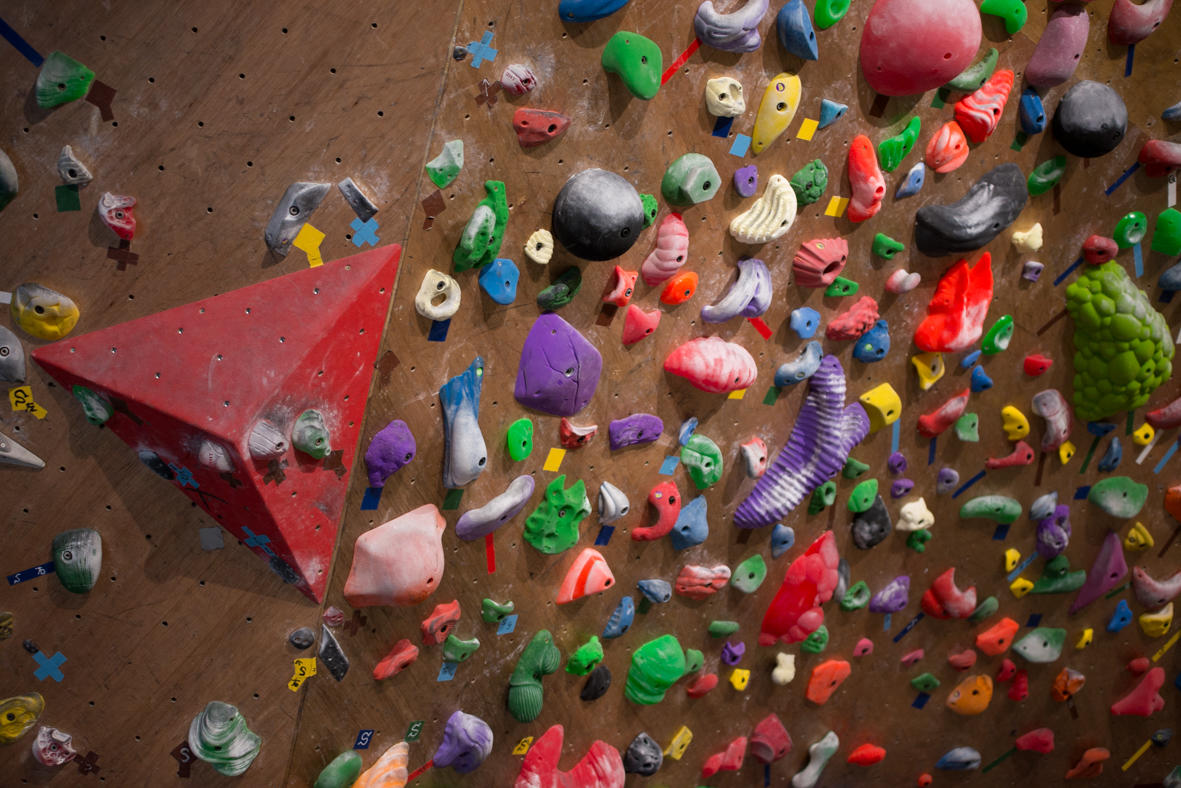 With sport climbing becoming an event at the 2020 Tokyo Olympics, what is Akiyo Noguchi’s new challenge?

I feel sport climbing is getting really popular. More and more beginners and kids are trying it out, and beginner and youth competitions are thriving. Japan has really good conditions for sport climbing, even on an international level, with over 100 climbing gyms just in Tokyo. I go to competitions all over the world, but wherever I am, hearing the cheers of the fans filling up the venue during a competition gives me a huge surge of energy. I feel like I’m climbing right along beside all the people supporting me.

I think the selection as an official sport at the 2020 Tokyo Olympics will bring climbing much more visibility and attention. I think the base of athletes will grow too, as kids see and are inspired by Japanese athletes in action. For that reason, I want to do my best. And for me, the Tokyo Olympics will definitely be a once-in-a-lifetime event. I absolutely want to compete as an athlete at the Games, and if I do, I hope to pull off a good performance. For now, I’m training hard toward my goal of winning the world title in September.

When fatigue builds, joint movement suffers, and when inflammation flares up, joints swell.

Noguchi never fails to carefully stretch out her fingers before competing, even when she first got into started climbing. What’s surprising is not only the strength of her fingers but also how beautiful they are for a climber. “My go-to nail polish color is red. My fingernails are always in my line of sight, so I want a color that perks me up.” 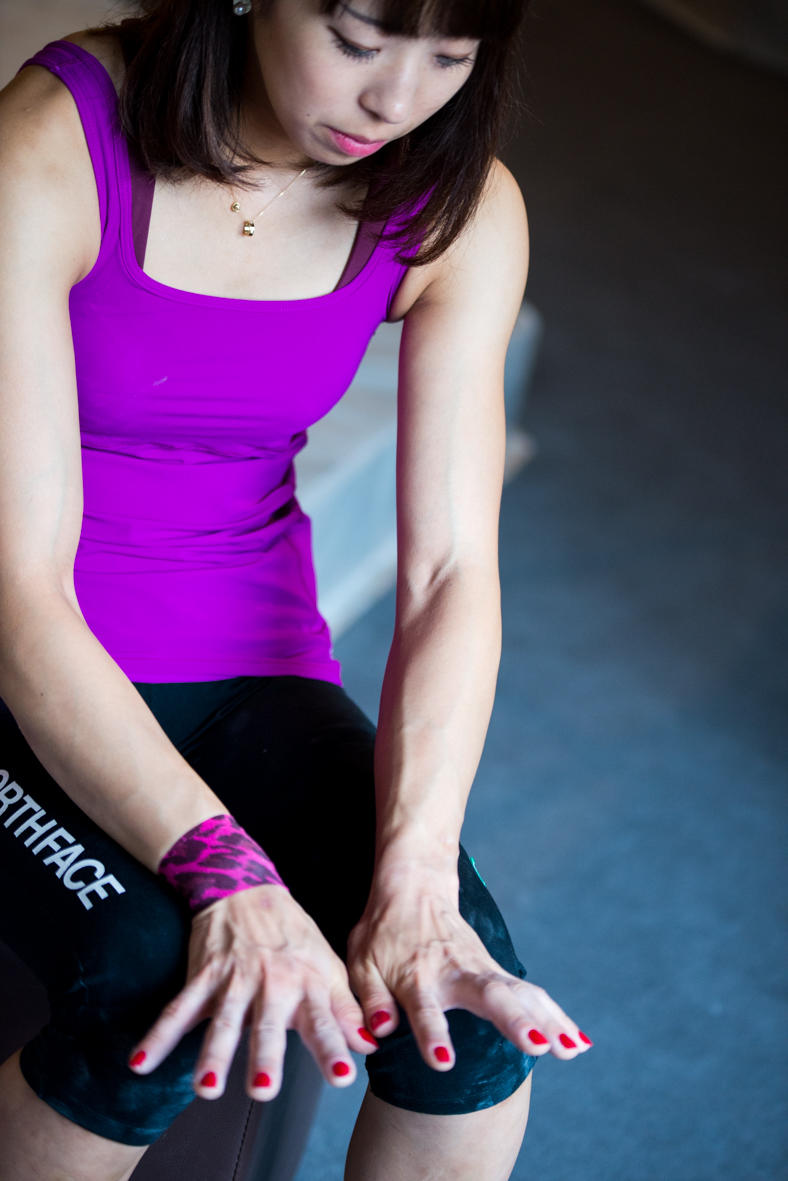 Noguchi’s biggest weapons are her tenacious finger strength and her whole-body flexibility.

Because she has complete control over her body, even down to the tips of her toes, Noguchi is able to clear extremely difficult problems with creative footwork. This allows her to make elastic-like climbs that seem to defy gravity. 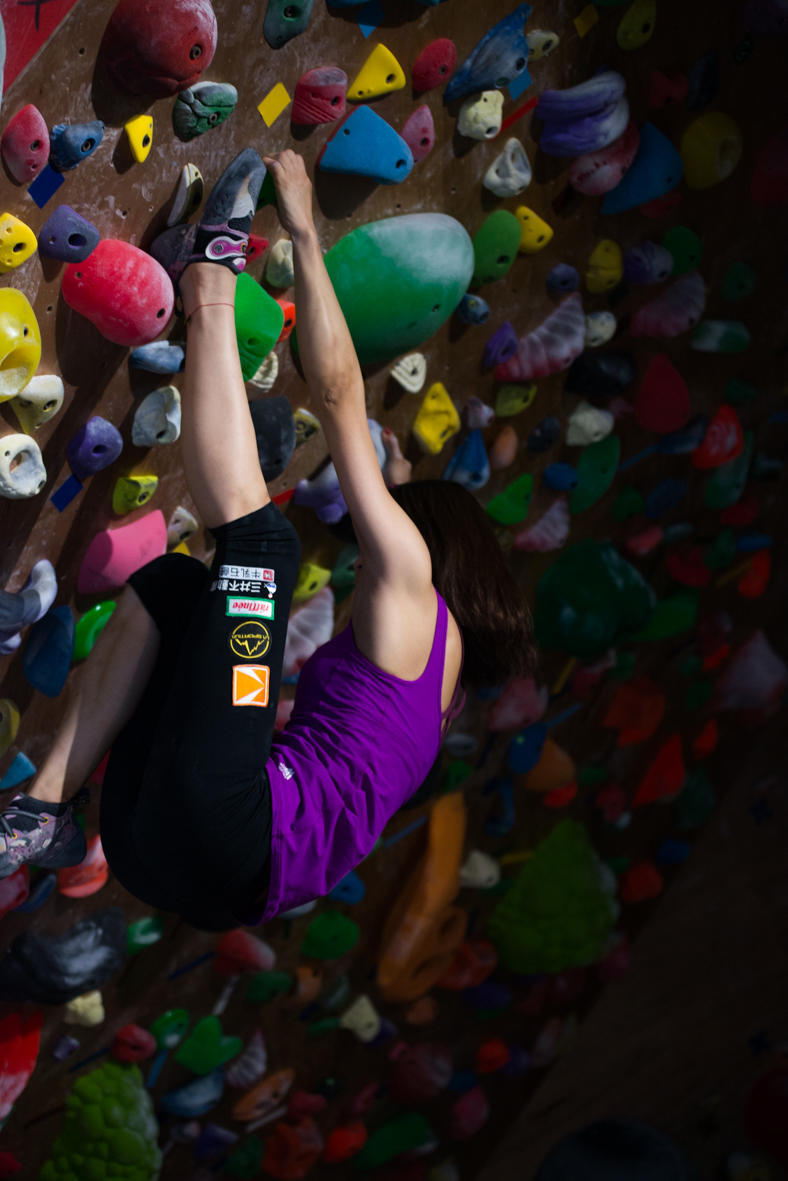 Climbing is like a continuous work out for your muscles.

Training takes up to six hours a day. Everything has the same importance, not just climbing but also carefully stretching and warming up and cooling down before and after a workout.

Noguchi names figure skater Mao Asada as a female athlete she admires from her generation.

“Both figure skating and sport climbing are individual events, and you are competing directly against your opponents. I empathize with her because I can relate to the tension of the competition and the focus the athletes have to maintain. I think Asada is amazing for remaining at the top for so long in that world.”

Akiyo Noguchi
Born in 1989, Noguchi got her first taste of sport climbing on a family trip to Guam when she was in fifth year of elementary school, after which she became a regular at a local climbing gym. She won her first title at the All-Japan Youth Championship during spring break in her final year in elementary school, after which she became a sensation as a rising star. She won the Bouldering World Cup competition in France in 2008, a first for a Japanese woman. She went on to claim the overall bouldering World Cup in 2009, 2010, 2014, and 2015. In Japan, she won the first nine annual Bouldering Japan Cup competitions ever held. Noguchi also won the 11th Bouldering Japan Cup in 2016 for her tenth victory overall.

Hakuhodo DY Media Partners is now helping in various ways to build up interest in sport climbing in coordination with the Japan Mountaineering Association, which oversees sport climbing competitions in Japan.

Sports can generally be divided into spectator sports that people primarily enjoy watching, like sumo or professional baseball, and participation sports, like marathons, that large numbers of people compete in. Sport climbing is unusual in that it has elements of both. It has the impressive spectacle of athletes ascending tall walls with sheer strength, and yet it can be enjoyed at any age, with kids and adults alike challenging the same problems, regardless if they are at a world-class competitor level or just a hobbyist. (Note that competitions do have some age restrictions.) Sport climbing also has an educational aspect, especially for kids, because it develops cognitive power and imagination when considering how to attack a route. All told, it is a sport with great potential.

Interest in sport climbing is growing with its recent inclusion as a new official event in the 2020 Tokyo Olympics. Several Japanese climbers already have a legacy of amazing performances at the World Championships and the World Cup, and there are high expectations for them at the Tokyo Olympics. The Olympics, however, are just one milestone in the development of the sport. Hakuhodo DY Media Partners takes a longer perspective and aims to help foster sport climbing, as both a spectator sport and a participation sport, and raise its value further while making use of our insight and knowledge rooted in a sei-katsu-sha viewpoint.

I have done sport climbing as a hobby, and it’s actually been a dream of mine since joining Hakuhodo to be engaged in promoting sport climbing. It’s a sport anyone can try at his or her own pace and enjoy a real sense of accomplishment. I hope more people will get involved and discover the fascination of sport climbing.