AI analysis of shopping behavior in the Vietnamese shopfront

Hakuhodo Institute of Life and Living ASEAN Vietnam Team held ASEAN Sei-katsu-sha Forum 2019: The Evolution of Sei-katsu-sha Behavior Through the Lens of Technology on October 4, 2019 in Ho Chi Minh City. This article reports on the session given by Hakuhodo Shopping Laboratory Vietnam’s* Natsuki Kumagai, who presented findings from the Laboratory’s research titled AI in the Shopfront: An Analysis of the Shopping Behavior of Vietnamese Sei-katsu-sha. 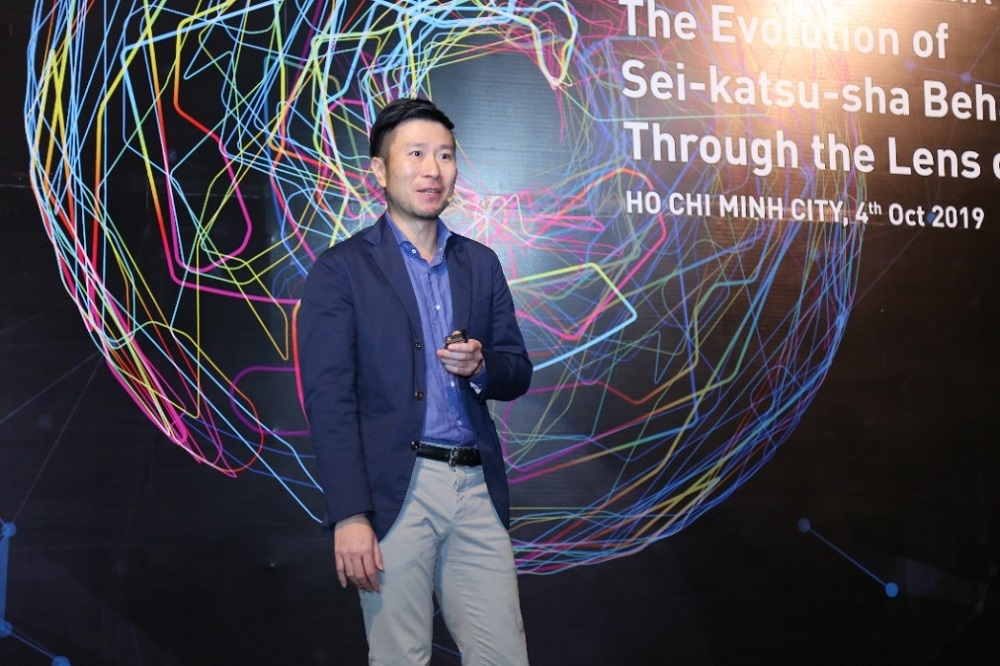 The Vietnamese retail market is characterized by traditional trade (small, individually-run stores that are not part of a chain), and it is said that 80–90% of Vietnamese people purchase everyday consumer goods, for instance, through traditional trade. Meanwhile, modern trade (supermarkets, drug stores, consumer electronics retailers and other chain stores) has been growing rapidly in recent years.

With the aim of understanding the characteristics of the behavior of shoppers at modern trade outlets, which are expected to grow in number in the years to come, the Laboratory surveyed three stores in Ho Chi Minh City in collaboration with a major Vietnamese apparel brand that develops, manufactures and markets its own products.

To understand the behavior of all shoppers, regardless of whether they bought anything, the survey used a shopper tracking system using AI-powered cameras. Already in use in Japan and other countries, the system is able to distinguish the number of shoppers, their age group, gender and shopping path characteristics (zones visited and stay times) within stores. Hakuhodo Shopping Laboratory Vietnam identified shopper behavior in Vietnam and based on this, conducted analysis with a view to improving products and stores. 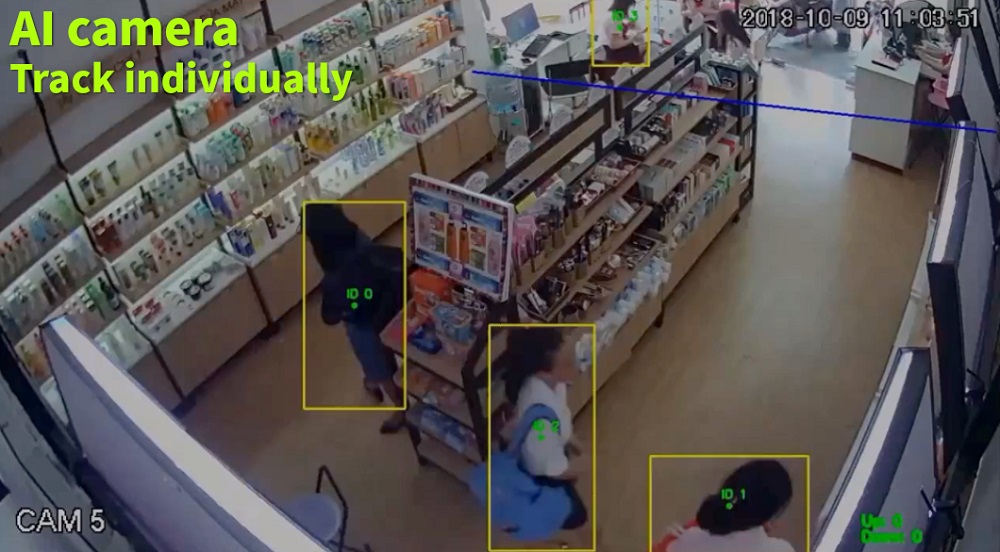 Analysis of shopper behavior patterns from 288 hours of video data from each store revealed the characteristics of zones visited by attribute.

An analysis of data obtained using the shopper tracking system crossed with POS data uncovered the following characteristics about shoppers of the apparel brand:

・ The purchase rate of shoppers aged 40 and over is extremely high and they purchase inexpensive products within just minutes and leave
・ Conversely, male and female shoppers in their 20s and 30s account for a large portion of shoppers, and although their stay time is extremely long, their purchase rate is low
・ Shoppers in their 20s and 30s have an extremely high rate of stopping in front of one particular shelf in the stores. 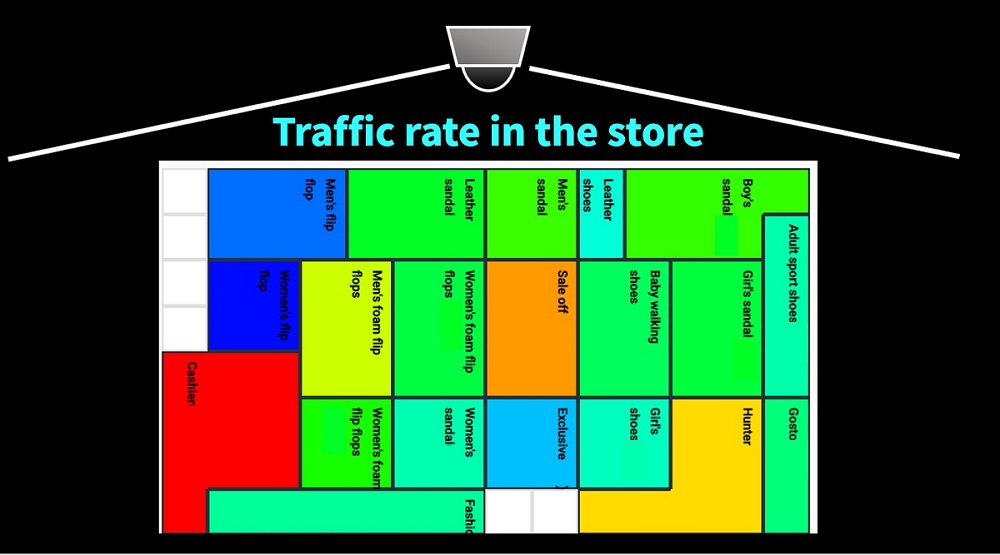 Example analysis of a Vietnamese apparel brand’s store layout and the zone visit characteristics of shoppers analyzed by the shopper tracking system. The color red represents a zone visited by many shoppers and blue the zones visited by few

Many shoppers come to stores but leave without buying anything, and this purchasing potential is great. But, until now, it has been difficult to obtain data on shoppers that leave without buying anything. It was a black box. Analysis using the shopper tracking system makes it possible to uncover the behavior of Mr. or Ms. X who came to the store with anticipation but unfortunately did not buy anything. A store strategy using Mr. X Marketing**, a marketing method that targets this Mr. or Ms. X, was considered. 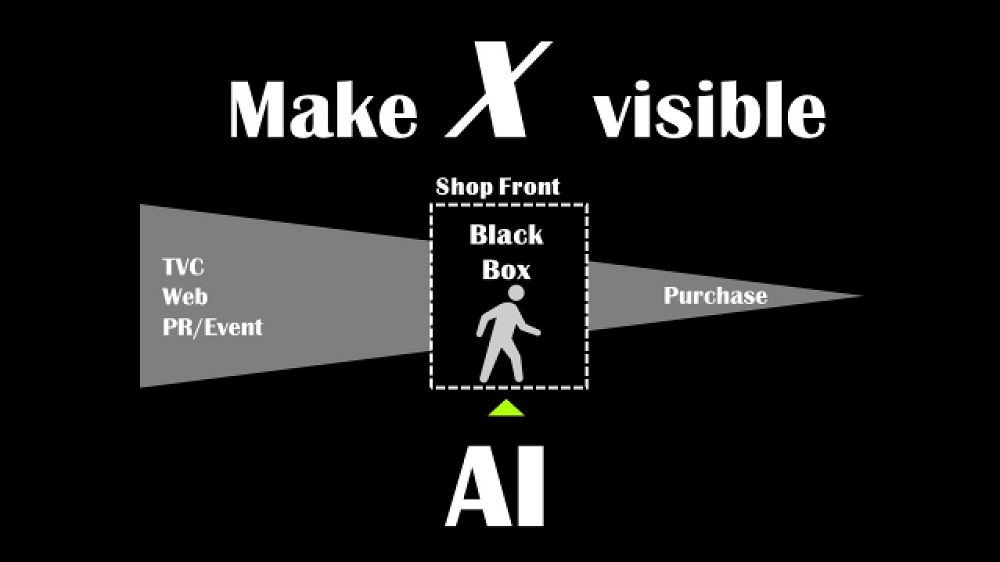 Using the above analysis findings, the Laboratory defined Mr./Ms. X as “males and females aged in their 20s and 30s that exhibited interest in certain sales areas and shelves but left without purchasing anything,” and drew up the following proposed measures tailored to the target’s characteristics based on the hypothesis that revamping products and stores around them would effectively be a shortcut to boosting sales.
(1) Create a space where they can compare products comfortably at their leisure
(2) Tweak product displays to promote cross sales (purchasing of another item as well)
(3) Tweak show window displays and lighting from 5 pm on, as this is when 60% of targets visit stores, according to the research
(4) Simultaneously, increase staff numbers so that service does not become shorthanded from 5 pm on

The measures are currently being tested in action at a pilot store created by the Laboratory. The Laboratory is making continuous improvements using the shopper tracking system and the PDCA cycle.

When considering store strategies for Vietnam, special marketing that takes into consideration shopper behaviors specific to Vietnamese shoppers, such as motorcycles being the main mode of transport and the high rate of shop visits with family members and friends, is essential.

Advances in technology like 5G mean that the day is not far off when all kinds of elements related to shopping, such as real stores, e-commerce sites, factories and distribution, are all connected via the Internet. But even when that day arrives, the Laboratory believes that one key to business growth will be finding Mr. and Ms. X, keeping sei-katsu-sha perspectives in mind.

Hakuhodo Shopping Laboratory Vietnam will continue to support the building and realizing of effective and sophisticated store strategies for the Vietnamese market, which looks set to expand further.

* Hakuhodo Shopping Laboratory Vietnam
Hakuhodo Shopping Laboratory Vietnam is a three-way project between the Hakuhodo Vietnam Group, Hakuhodo Product’s and Square Communications in Vietnam that commenced activities in 2018. It researches shopper behavior in modern trade, where growth is anticipated; improving store efficiency; and the science of selling, which has been overlooked until now. The Laboratory’s mission is to contribute to lifting retailers’ and manufacturers’ store sales by analyzing Vietnamese sei-katsu-sha, particularly insights into shoppers immediately prior to purchasing.

** Mr. X Marketing
In contrast to POS data analysis, which generally focuses on buyers, Mr. X Marketing is a proprietary method for turning latent customers who came to stores but did not purchase anything into buyers.