DataStadium Inc., a Hakuhodo DY Group company, runs a sports data business that gathers and analyzes many kinds of sports data and provides data content to the media and other clients. The company gathered and analyzed data on all 64 matches at the Russia 2018 FIFA World Cup™, where the Japan men’s national team made an impressive showing. For this column, we asked Tomonobu Takigawa, a long-time soccer data analyst at DataStadium, to look back at the Russia tournament from his analyst’s perspective. 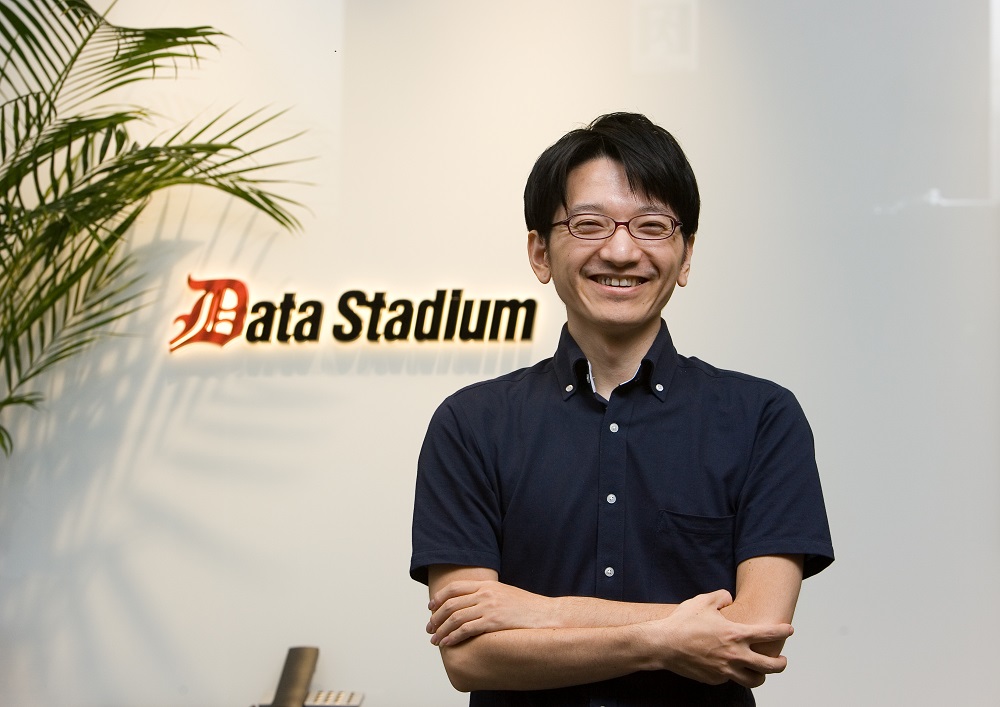 We collect and analyze around 2,000 data sets per match

At DataStadium, we collect data from all J.League matches (J1, J2, and J3), cup matches (J.League YBC Levain Cup), and Japan national team matches. We capture around 40 different types of data, so for a typical match we collect about 2,000 data sets. These include types of passes and shots, whether they were completed, their direction and distance, who initiated them and in which area… Once you associate these data points and tabulate them, you wind up with an enormous amount of data. Soccer is a very difficult sport to assess and interpret with numbers. Unlike baseball, for example, which you can evaluate with batting averages and other individual statistics, offense and defense maneuvers in soccer nearly always require multiple players working together. Despite these complications, we collect and analyze these kind of data every day and provide them in formats that are easy for the media and ordinary people to understand and make use of.

A look back at Russia 2018—Why so many thrilling matches?

For many fans, the latest World Cup was probably memorable for its overall unpredictability and excitement. Ball possession is one metric that substantiates this.

Figure 1 contrasts the performance of teams that held the ball less than 40 percent of the time at the Brazil 2014 World Cup and the Russia 2018 World Cup. Of the 64 matches in Russia, 24 had ball possession ratios of 60:40 or larger, which was up significantly from the 13 such matches in Brazil. Looking at just the time of possession, we might conclude there were many one-sided matches. However, the winning percentage and draw percentage of teams with low ball possession—under 40 percent—were quite a bit higher this time (38 percent wins, 33 percent draws) than in Brazil (15 percent wins, 23 percent draws). This indicates that low-possession teams still eked out victories either by adopting defend-to-win strategies or by scoring on the counterattack. 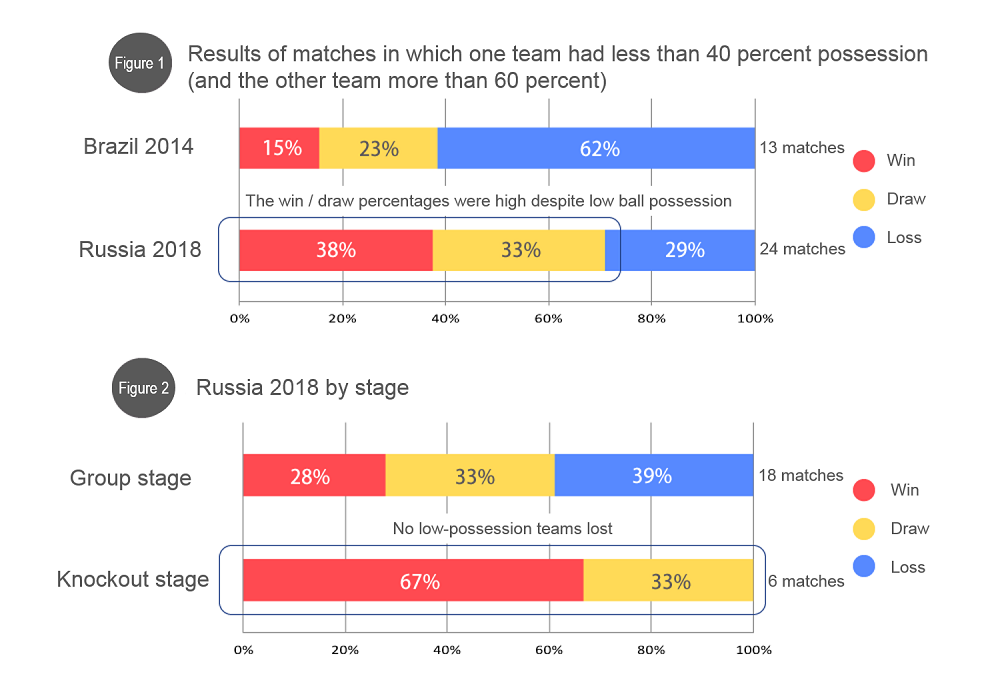 This winning tendency of low-possession teams was even more pronounced in the knockout stage (Figure 2), possibly because many teams had definitive game plans to notch a win. Nevertheless, part of the World Cup’s unpredictability can be connected to these results, which defy the conventional notion that the team with the greater ball possession has an advantage.

The video assistant referee (VAR) system* was used for the first time at a World Cup in Russia. Its introduction is thought to be a contributing factor to the tournament’s unpredictability. Head referees reviewed video with VAR in 20 matches. Of the 24 incidents that underwent video review, 18 were decisions about whether to award a penalty kick (PK). Nine times head referees awarded a PK based on video evidence when none had been originally ruled on the field. The majority of these rulings came in the group stage, with fewer VAR decisions in the knockout stage. It appears that as the tournament progressed, players became wary of VAR and held off on simulations (diving) and other “obvious” acts. 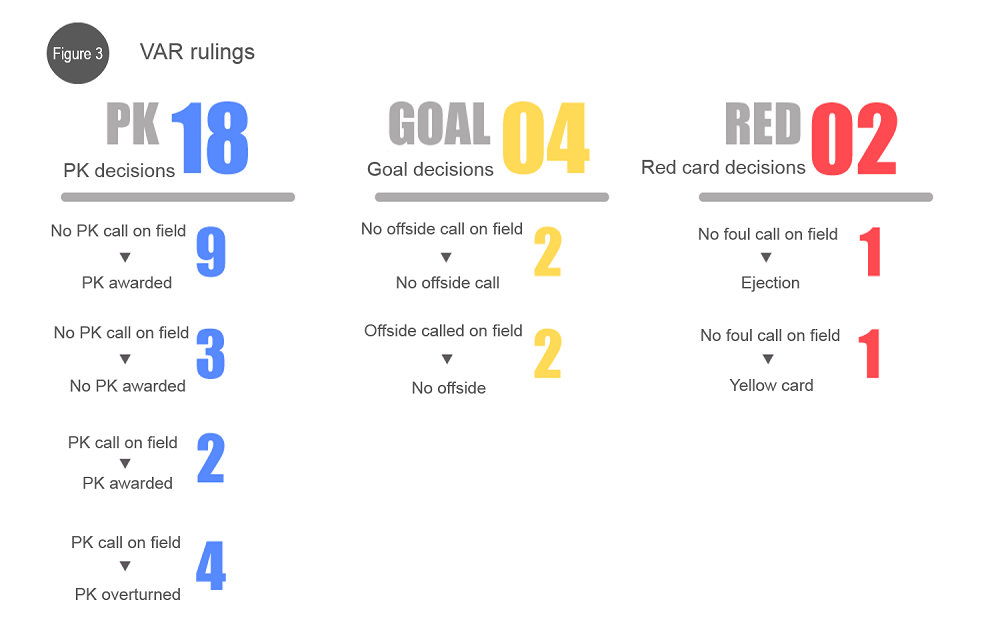 The VAR review time also had an effect. The added stoppage time caused by VAR reviews did lead to some surprising finishes. There were more go-ahead goals scored in second-half stoppage time or the final minutes of matches than in the previous tournament, which resulted in more dramatic matches such as Belgium’s last-minute comeback victory over Japan in the knockout stage.

*What is VAR?
VAR stands for the video assistant referee system. The three referees on the pitch normally make judgement calls in soccer. But on plays affecting the outcome of the match, the head referee can make judgements in consultation with a video review. VAR was introduced to support the head referee, such as preventing fouls in referees’ blind spots and preventing mistakes in judging. VAR was used for the first time at a World Cup in Russia, and it is gradually being introduced in national leagues across Europe.

A coaching change just two months prior to the opening of the tournament threw the Japan national team into disarray. We decided to look at how the team’s style of play changed before and after the coaching change. To do this, we compared data from 14 matches (Asian qualifiers and the pre-tournament European tour) under former manager Vahid Halilhodžić and from four matches under his successor, Akira Nishino, at the Russia World Cup. 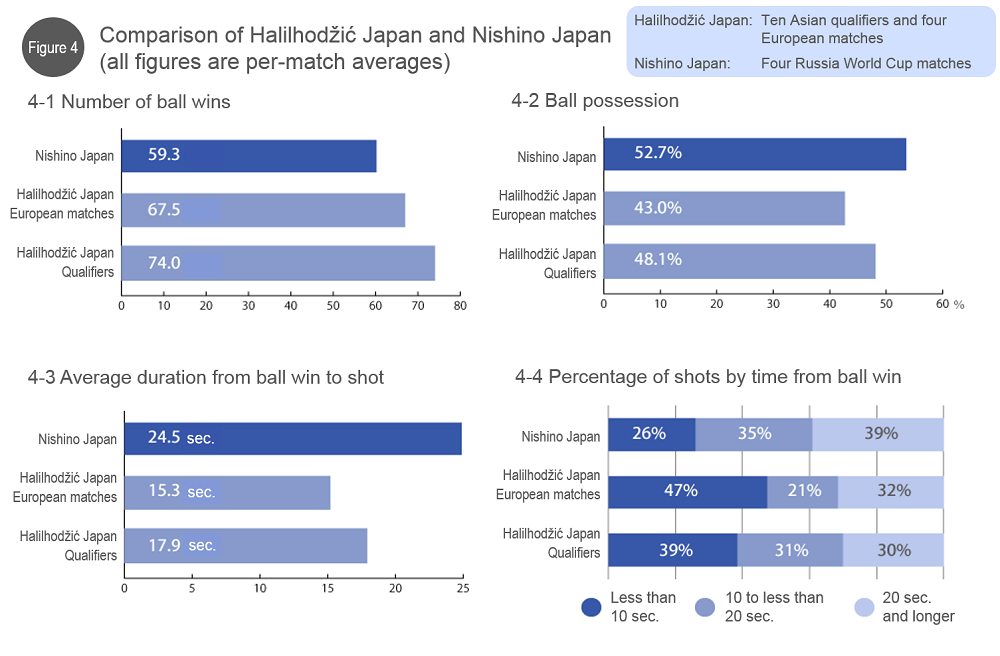 The data demonstrate that under Halilhodžić, the Japan squad won the ball more—i.e., it switched from defense to offense more often—and quickly pressed the ball forward to shoot. The data also show that under Nishino, Japan kept possession of the ball more and instead of breaking out on offense, took more time to shoot (Figure 4-4).

It must be remembered these are averages. Nishino’s side did score on fast attacks after winning the ball, such as when Genki Haraguchi scored the first goal in the match against Belgium. In other words, Nishino Japan controlled the ball to a certain degree but would move forward and attack quickly when opportunities arose. That this approach had some success can be credited to the team’s achievements under Halilhodžić’s direction.

We also looked at the achievements of noteworthy players. Let’s start with Gaku Shibasaki, whose rating was high throughout the tournament. Among completed forward passes one or two touches prior to a goal (Figure 5), Shibasaki’s 49.8-meter pass in the Senegal match was the third longest of the tournament.

Next up is Yuya Osako. He was the top player by a fair margin in terms of number of post-play contributions—i.e., the number of times he gathered a forward pass and completed a pass that led to a shot in the course of that attack. He recorded eight such plays at the tournament, despite having less on-field time as a starter than the other players on the list (Figure 6). 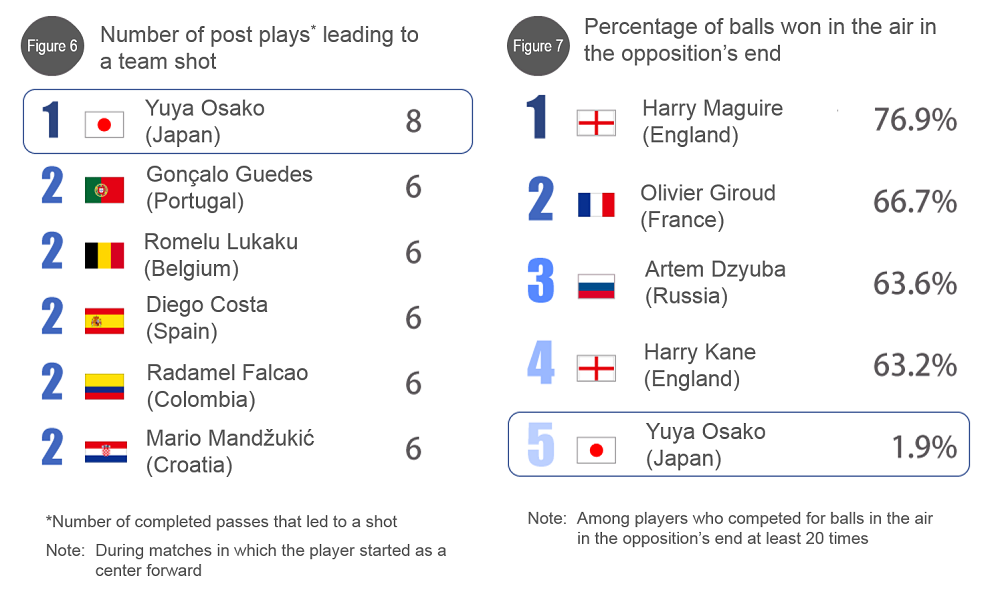 Osako also shone in competing for balls in the air. Of the 21 times he competed for balls in the air at the opposition’s goal, he won 13 times for a success rate of 61.9 percent—the fifth best mark in the World Cup (Figure 7). He completely devoted himself on many plays leading to shots as well. In my opinion, Osako should be named Japan’s MVP of the tournament. Keisuke Honda also put in a spirited performance with one goal and one assist while coming off the bench.

Analysis of the dramatic Japan-Belgium match—A singular goal that developed in just 9.5 seconds

Let’s dig a little deeper into the Japan-Belgium knockout match that I expect is still in the minds of many. Going back to the group stage, Japan had been having quite a bit of trouble with corner kicks. This continued into the Belgium match, where Japan gave up six shots and two goals within five touches after corner kicks.

Belgium won 75 percent of balls contested in the air (Figure 8) versus Japan’s 25 percent, highlighting how thoroughly Japan was outplayed in front of its goal. Shinji Kagawa, Takashi Inui, and Yuto Nagatomo performed well for Japan in terms of shot opportunities during the match (Figure 9). Kagawa was effective in an assisting role, leading the way with six passes leading to a shot within three touches. 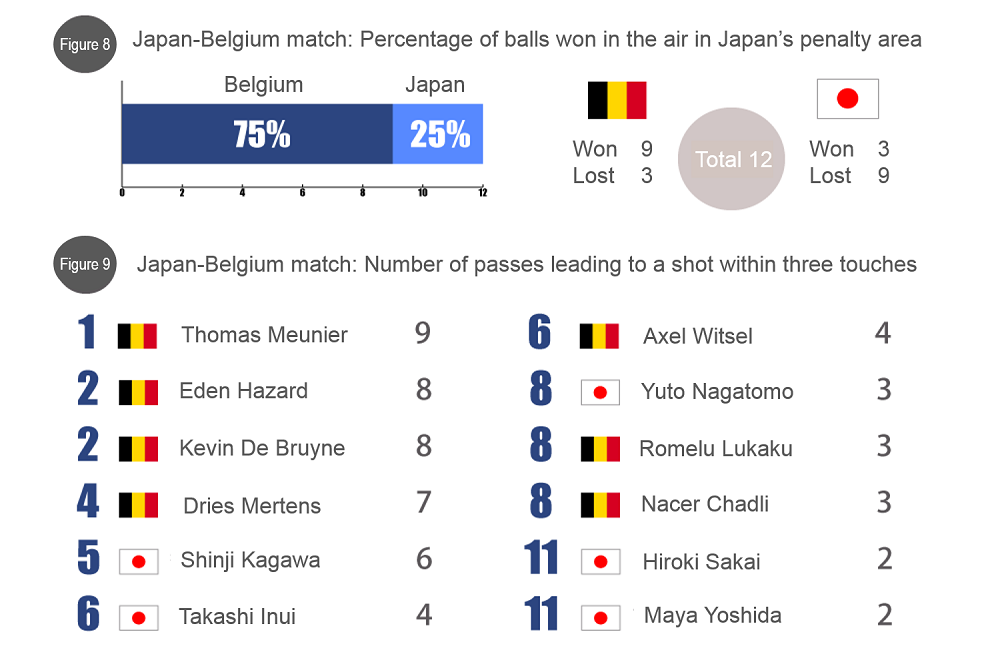 Belgium’s counter in the dying seconds of the match for their third goal was an exceedingly rare goal not seen in either the 2010 World Cup or the 2014 World Cup. The Belgium side won the ball low in their own end, finishing in Japan’s net just 9.5 seconds later after four straight completed passes. Figure 10 traces how the goal was scored. 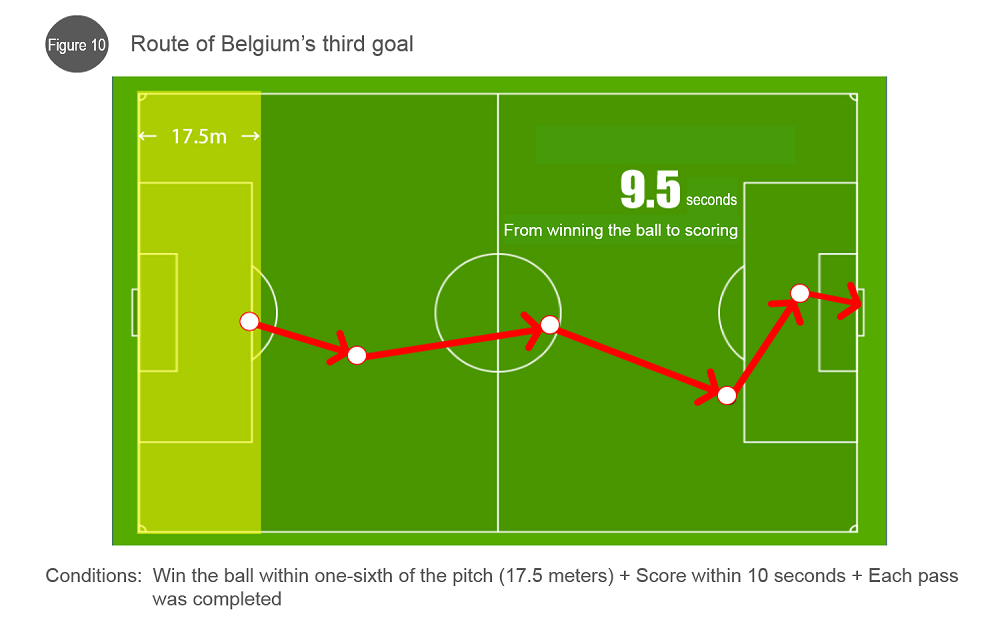 In point of fact, Belgium unleashed similar counterattacks in other matches, but none were as beautiful as this one. 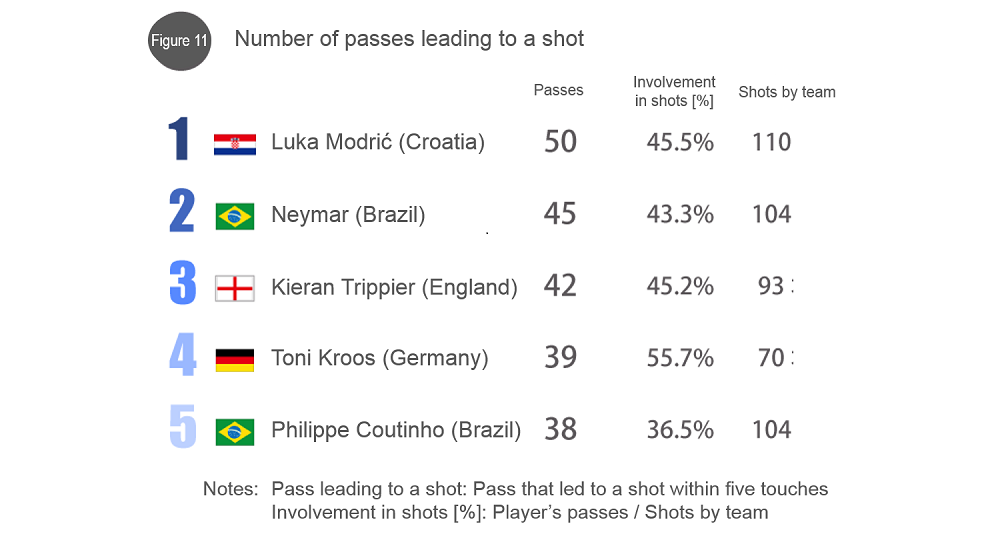 In my opinion what Japan needs to develop is the defensive proficiency to win in the later stages of the World Cup. (In the last three World Cups, the winning team has given up an average of just 0.58 goals per match and conceded no goals in 62 percent of their matches.) Japan improved its percentage of shots on target and scoring percentage from the previous World Cup and produced fair results on the offensive side in terms of creating chances and shooting accuracy. What’s left is for the team to bolster its defensive proficiency that makes use of Japan’s inherent organizational strength. 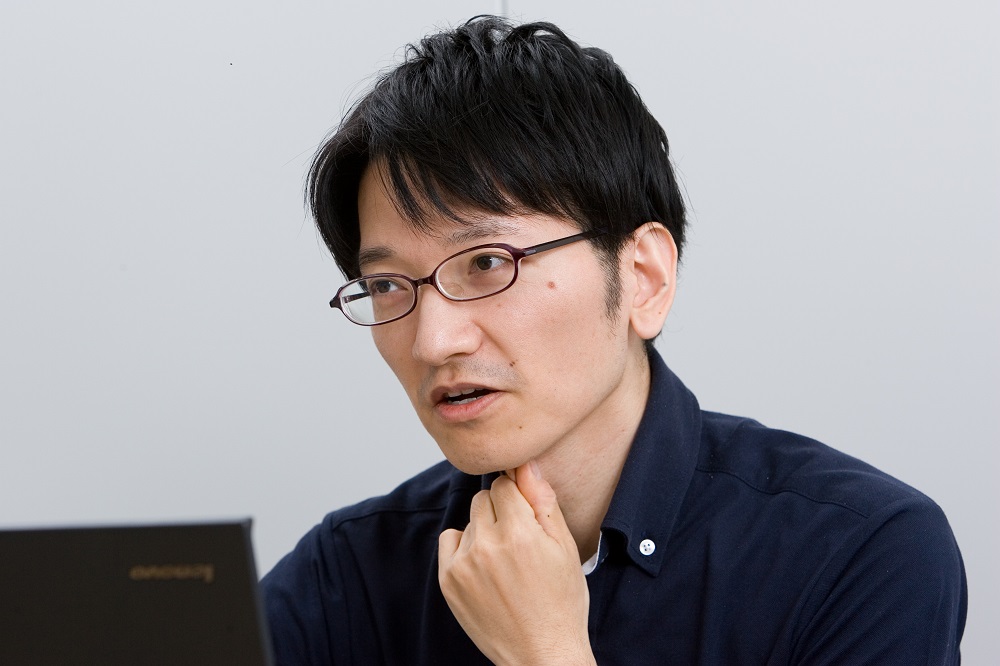 Russia 2018 was full of excitement because you never knew what was going to happen. Nevertheless, I think soccer trends are set to change substantially over the next four to eight years. Even as it continues to keep close watch of these developments, Japan’s national team, while working to overcome the issues I’ve outlined in this column, should establish a framework for the development of young players with a clear long-term vision in mind. If it manages this, I believe the team will become considerably stronger. 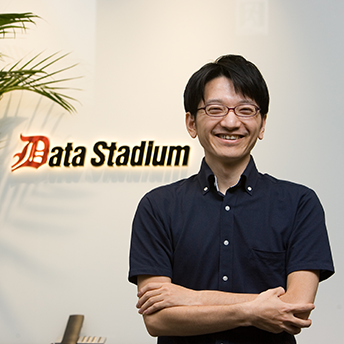 Tomonobu Takigawa
Soccer Analyst, DataStadium Inc.
After graduating from university, Tomonobu got a job as a soccer data entry part-timer at DataStadium in 2003. After about three-and-a-half years in data entry rising to part-timer leader, he started his current position in June 2006. Drawing on his experience in managing data-entry accuracy and data delivery and operations support for teams, he is now involved in producing and proposing data content and providing data primarily to media outlets such as TV channels, newspapers, magazines, and match broadcasts. A frequent interview subject and guest on TV shows, Tomonobu provides commentary on data for sports news and related programs. Born in 1978, he is a native of Shizuoka Prefecture.
SHARE
Back to News & Insights